Home > Food & Drink > Dining > Here’s where you’ll get the flakiest, most buttery croissants in Singapore 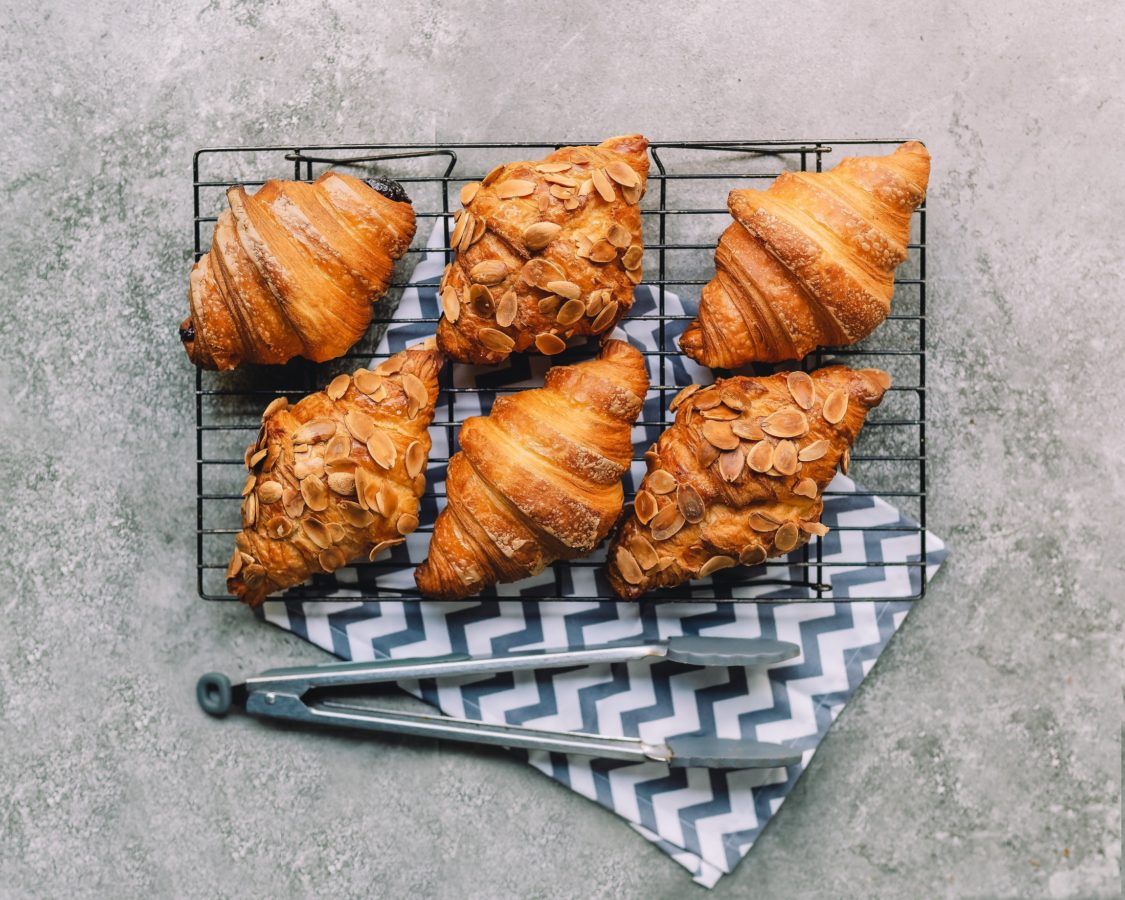 Here’s where you’ll get the flakiest, most buttery croissants in Singapore

Food & Drink
Here’s where you’ll get the flakiest, most buttery croissants in Singapore
Share this article
Next article

It’s flakier than your introverted friend. But like your best buddy, we just can’t swear off croissants. Which is why we’ve come up with seven spots to get the best croissants in Singapore.

The traditional French pastry has been in Singapore for years, but with the rise of artisanal bakeries across the country, you can now get quality examples from the classic to the cruffin.

To achieve croissant’s rich, airy texture, butter is folded into the dough over and over until they form multiple, alternating layers. The process is called lamination, and other viennoiserie-type pastries include danishes, pain au chocolat, and chouquettes.

Croissants from larger producers typically use commercially available yeasts for fermentation. In recent years, the popularity of sourdough starters have spread to croissants, and many smaller bakers are now using that technique.

Such bakeries here include Le Matin, which helmed by a Noma-alumni chef. Brotherbird goes for the modernist approach with unexpected flavours, while Mother Dough does it the French way with a New York spin.

Opened by a French baking authority, Maison Kayser is an international French chain whose croissants are more razor sharp than rustic. Petit Pain adopts the Japanese kaizen focus towards their craft while Brera elevates the traditional neighbourhood bakery. Finally, Tiong Bahru Bakery doesn’t miss a step even as it expands throughout Singapore.

Read on to find out where you can find the best croissants in Singapore. 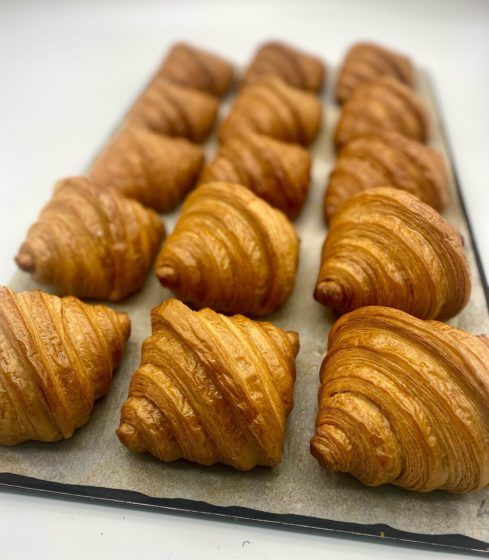 Le Matin is the eponymous patisserie of chef Mohamed Al-Matin. Before opening his spot right before the pandemic, he worked as a pastry sous chef at Noma in Copenhagen, was the head pastry chef at Restaurant Andre in Singapore, and held stints at Adriano Zumbo Patisserie, Black Star Pastry, and Quay in Sydney.

All of Le Matin’s pastries are solidly French: his sourdough croissant is rich and pleasantly tangy and his almond croissant is delightfully sweet and airy. Where he flexes his fine dining chops is through his beef tongue and cheese croissant panini: it’s layered with beef tongue and wagyu bresaola, mixed with four different cheeses, and filled with pickled rose petals, butternut, and horseradish.

Le Matin only sells their croissants in their Basics box of five or six different pastries (depending on the selection) for S$32. The beef tongue and cheese croissant panini is part of their Assemblage V1 box (S$58) with three other pastries. Alternatively, visit their test kitchen from 8am to 5pm on Wednesdays to Sundays for a la carte orders. 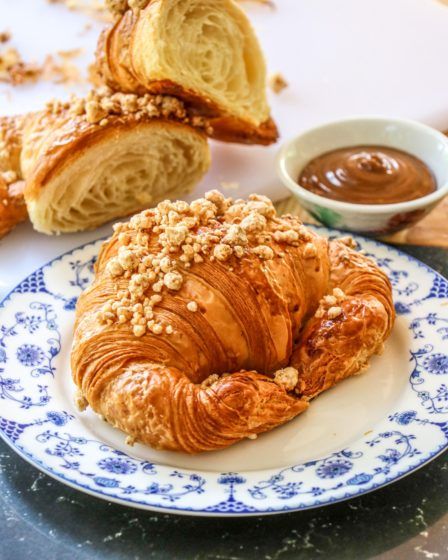 Tiong Bahru Bakery has been making the artisanal croissant accessible for about a decade now with different locations around the country.

Their croissant is still on point though. They’re handmade from French flour and Normandy butter, and require up to 72 hours before they’re ready. Craving a croissant later in the day? They’re baked fresh every two hours.

The stores offer a variety of styles: the original is light and buttery, the almond is denser and crunchy. They also have a sourdough option at their Foothills location, which is topped with crumble and served with a side of hazelnut praline.

Additionally, you can win a year’s supply of TBB’s croissants just by eating them. From now till 9 January 2022, they’re secretly filling some of their regular croissants with custard. Snag one, and you get a free croissant for the next 365 days.

TBB’s regular croissants are available at all locations, while the sourdough croissant is only available at Foothills. More information on the contest can be found here. 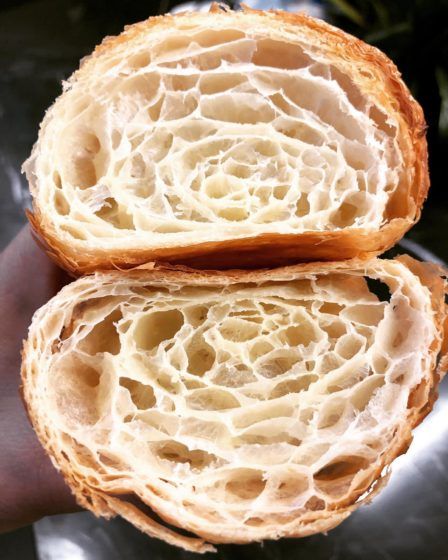 Bakery Brera is a neighbourhood spot serving those around the southern end of Bukit Timah. Using ingredients from France and Japan, they make artisan loaves, baguettes, and viennoiseries that sells out fast.

Come early to snag their flaky croissant, or get their triple cheese ham croissant for something more substantial. Brera is also doing mashups like the cruffin: a croissant baked in a muffin tin then stuffed with fillings like Ferrero Rocher, lemon curd, peanut butter and jelly, or salted caramel.

Bakery Brera is open from 7:30am to 4pm on Sundays and Mondays, and 7.30am to 6pm (or till sold out) on Tuesdays to Saturdays. 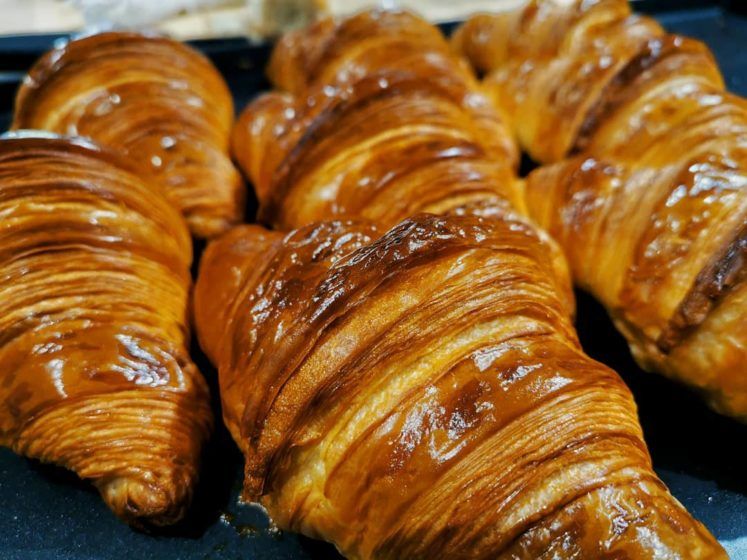 You’ll need some time to buy a croissant from Petit Pain, a small bakery in Joo Chiat that regularly has lines outside its door. Their breads are made from French, Japanese, or organic stone-milled flour, and fermented between 18 to 24 hours. They also use fermented French butter and make all fillings themselves.

Petit Pain only makes one type of croissant – the classic – and it’s sublime. They limit eight viennoiseries per patron, so bring a friend.

Petit Pain is open on Saturdays and Sundays from 10am till sold out, and Wednesdays to Fridays from 11am till sold out. They recommend you visit before noon. You can also reserve items from the link below. 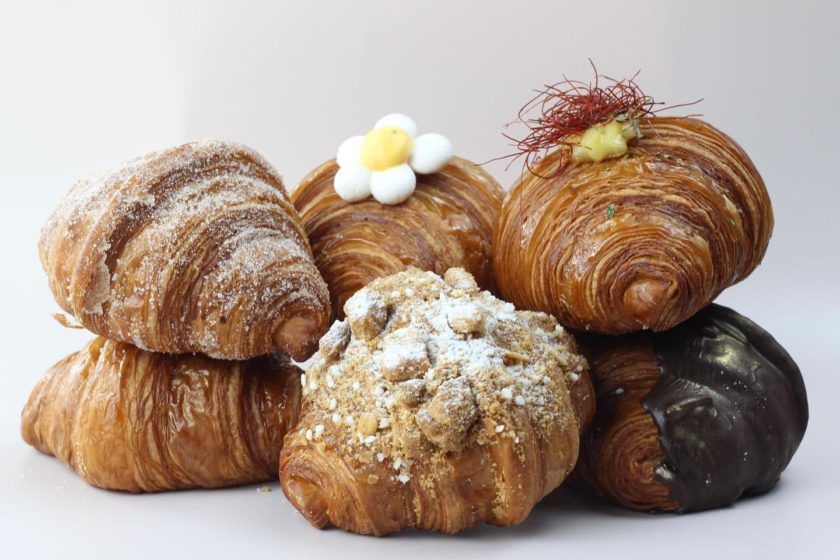 Brotherbird has an aesthetic that’s all clean lines, soft lighting, and white backgrounds. A bit like Kinfolk meets Cupertino. It isn’t all marketing flash though. The original croissant is made with French butter, sea salt, and has a sugar glaze, giving it a crispier exterior and a savoury bite.

The main draw, however, are their croissant twists. They currently have apple crumble and mentaiko prawn versions, as well as a Ferrero Rocher glaze and matcha cruffin. Flavours change regularly, so don’t miss out.

Their croissants are available only in a box of six for S$31, but Brotherbird has a coffeehouse in Bali Lane that offers a la carte options.

Brotherbird Bakehouse is open daily from 10am to 2:30pm or until sold out.

Brotherbird Coffeehouse is located at Bali Lane, 32 Bali Lane, 189868. Takeaway croissants are from 10am to 4pm on Mondays and Tuesday, or you can dine in from 10am to 6pm from Wednesdays to Sundays. 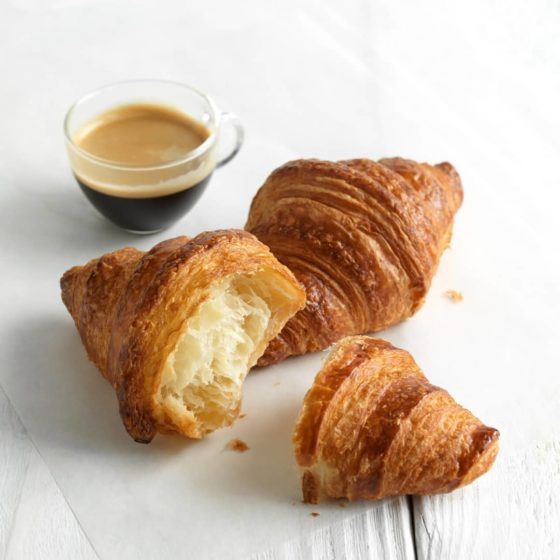 Maison Kayser is a French bakery chain with major chops. It was founded by Eric Kayser in 1996, who wrote multiple books on baking, teaches at the French National Institute of Bakery and Patisserie, and invented the Fermentolevain, a machine that maintains bread starter at a certain temperature so it’s always ready to be used.

Singapore is one stop on Maison Kayser’s global domination; they also have locations in 23 other countries. They work with French flour millers to come up with their own blend, and all breads are naturally leavened and proofed for 12 hours before baking. The result is a croissant that’s textbook: golden, flaky, airy, and buttery.

Maison Kayser’s croissants are available at locations across Singapore. 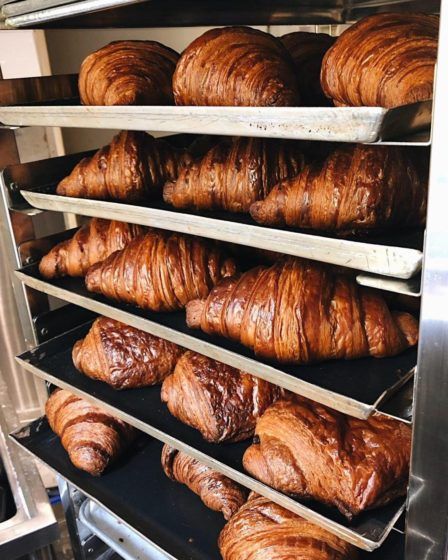 Mother Dough gets its moniker from the fermentation starter or sourdough culture used in traditional bread making. Their starter comes all the way from a bakery in Brooklyn, where head baker Naadhira Ismail worked at before returning to Singapore.

Mother Dough Bakery opens from 11am to 5pm on Tuesdays to Sundays. For walk-ins, they recommend you arrive before 11am. Otherwise preorder from the link below.

Address
3 Jln Kledek, Singapore 199259 google map
Website
Website here
Price
S$4
Get it here
Food French Dining Pastry Bread Croissant
Jethro Kang
Jethro enjoys wine, biking, and climbing, and he's terrible at all three. In between them, he drinks commercial lagers and eats dumplings.
Sign up for our newsletters to have the latest stories delivered straight to your inbox every week.