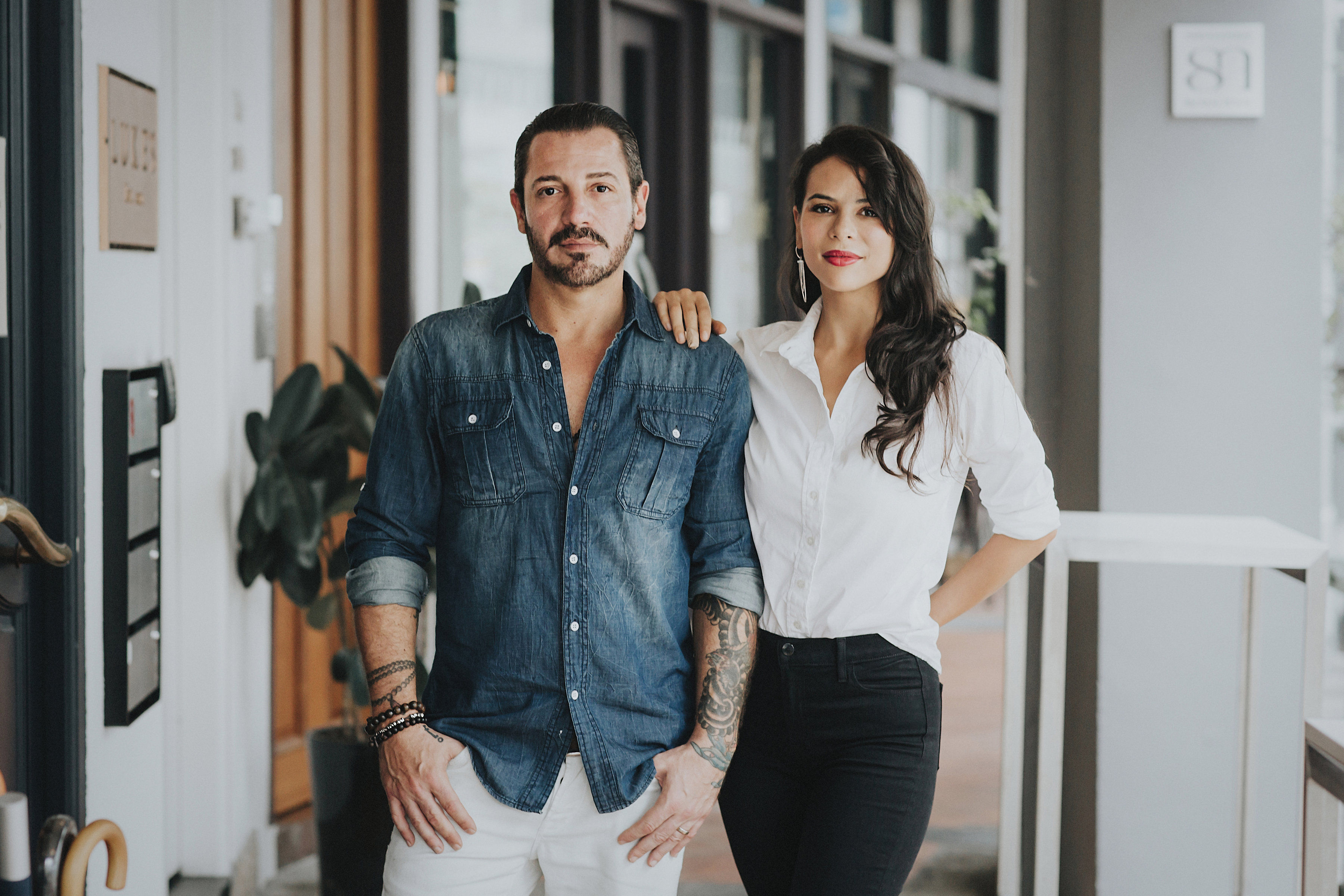 Banter with the boss: Joshua and Sarissa Schwartz of SJS Group

Ask anyone if they’d work with their spouse, and more often than not, you’d hear a resolute “no”. It’s a shaky situation, committing to a business beyond personal partnership. When one hears of entrepreneurial success stories created by husband-and-wife teams, there is a measure of awe at how they’re able to take their basic relationship to the next level. Joshua and Sarissa Schwartz are that couple.

And the two New York natives make a damn good team. Both are the founders and managing directors of SJS Group, a Singapore and Hong Kong-based restaurant and nightlife development company. They’re responsible for establishing familiar hotspots such as Bang Bang, Employees Only, and the upcoming late night live lounge, Lulu’s. Given their success, it would be fair to assume the duo were both passionate about nightlife from the get-go.

Joshua got his start in the food and beverage industry at the age of 10. His father was a chef, and often roped him in to help with deveining shrimp and cutting onions in the kitchen during his school vacations. After knocking off work at five o’clock, the then-pint sized Joshua — dressed in his oversized chef whites — would sit at the bar, order a Shirley Temple, and observe the front of house operations.

“It mesmerised me,” Joshua said. This led to the man climbing the industry’s ladder in New York and Miami, doing every possible role there was, from dishwasher to general manager. On this extensive journey of experience, he said: “I began to realise that if you’re really good at something, and you keep going back to it, then it’s probably a passion”.

Working in nightlife for that long, comes with its fair share of wild stories. During the early ’90s, Joshua was bartending in a pioneering restaurant-bar that drew celebrities by the flock, including names like Micky Rourke and Bono. It was a time before DJs, and the stereo system was situated behind Joshua’s already cramped bar station.

“One night, the most famous supermodel at the time needed to use the restroom,” he recounted. “It was the ’90s, so you could probably figure out what they were doing. So this model came behind to where I was bartending, squatted down, and urinated on my foot. At the same time, a very well-known musician was shoving me out of the way to get to the stereo. While all this was happening, I was racking my brains trying to think of how to make a Cosmopolitan for someone’s order. I remember the model looking up and me and saying, ‘Sorry, bathroom’s full'”.

He took his shoe off, obviously.

This wasn’t a passion that Sarissa always shared. Having pursued a degree in international business at George Washington University, she was offered jobs at Merrill Lynch and JP Morgan. Just as she graduated in 2008, Wall Street crashed. The international disaster wouldn’t have affected Sarissa if she had taken up either position, but she witnessed the destabilising effects the crash had on people around her, and decided to abstain. Eventually, she turned to bartending to pay off her student debt. It was during one of her stints that she met Joshua.

After lots of charm, roses and pursuing, the two eventually got together. They were then provided the opportunity to work on a project at the then-unopened Marina Bay Sands.

That project was Pangaea. Touted by Forbes as a Rich Man’s Club, Pangaea was an ultra ritzy club situated below the casino complex. The place screamed luxury, drawing high rollers, socialites and celebrities. At one point, it even collaborated with luxury jeweller Mouawad to create Asia’s most expensive cocktail, priced at S$32,000.

At that time, the nightlife market in Singapore was hungry for something new, and the Schwartzs saw an exciting opportunity to help launch Pangaea. It was successful during its heyday, with a star-studded clientele the likes of David Beckham. Sarissa remembers the sheer hysteria that happened the night Beckham visited, where security guards were toppled over by rabid fans.

But all concepts, even one as prolific as Pangaea’s, require evolution. “There really wasn’t anything here for a top-tier, more mature crowd. When Pangaea was formed, we wanted to create an exclusive crowd, without excluding people. The problem with having a place where people’s perception of it is based solely on displays of wealth, is that the illusion begins to wear thin,” said Joshua.

“The nightlife scene here changes quite rapidly. My estimation is every one and a half to two years, people begin to crave change,” added Sarissa.

With the eventual cessation of Pangaea, the duo opened Bang Bang, a high-octane club housed in Pan Pacific Hotel. The idea was to create a big room environment, inspired by the mega clubs in Miami and Las Vegas, within a small venue. At 5,000 square feet, Bang Bang was a project that Joshua and Sarissa were incredibly purposeful with. As it was being established, the Schwartzs concurrently worked on another project — Employees Only (EO), the mother of all speakeasies from New York.

When the couple arrived in Singapore, it was a time where cocktail bars and hidden watering holes weren’t the norm they are now. They saw potential for EO to entice local consumers, but it took four years to source for the right venue.

“This challenge was a bit fortuitous at the time, as we begun to see the influx of cocktail bars that really made Singaporeans familiar with the concept. With Employees Only, people got to see a different side to a cocktail bar,” explained Joshua. “I wouldn’t even call it a cocktail bar. It’s just a bar that serves good cocktails and great energy”.

Focusing on a vibe, or a mood, is a recurring motivation whenever the Schwartzs start a new place. Their upcoming project, Lulu’s, is touted as a late night live lounge with an intriguing fictional backstory. Taking cues from the 1960s go-go bar in film classic, Goodfellas, a detailed narrative behind Lulu’s took shape.

“You have Lil’ Louie, who’s married, but has a mistress named Lulu. She’s got big red hair, long nails, wears leopard (prints), and such. Because Lil’ Louie refuses to divorce his wife, he builds her this lounge so they can have a place to be together. You can see hints of Lulu throughout the place,” said Sarissa.

When asked why a lounge, Joshua harkens back to the ’90s in New York, where cabaret licenses that allowed people to dance within a venue were hard to procure. Owners were forced to put couches on the dance floor, and people would groove wherever there was space.

The clandestine Lulu’s, to open this month in Pan Pacific Hotel, intends to take people on an immersive journey through nightlife. From 10 pm to 6 am, the mood and experience one has will constantly evolve. Live performers singing jazz standards may segue into a DJ spinning, and the physical space will subtly shift in turn. “Being open until 6 am gives us a wide canvas to paint,” quipped Joshua.

Having a varied handful of nightlife establishments to run, comes with the natural assumption that the couple are avid partygoers — and that partying equates to work. “People think that this is easy, and I work only at night. It’s not. A bulk of the work is done during the day. Once night comes, it’s observing and dealing with little things here and there,” explained Sarissa.

Which sparks a discussion on how people perceive what it’s like to run nightlife establishments in Singapore. A new club, pub or bar seems to burst into the scene every month, while some quietly close down, leaving patrons with a bad aftertaste. Having a space and some music, Sarissa mentions, doesn’t equate to a winning formula. “You’ve got to give people something to come for, instead of just expecting them to.”

Such attention to providing an experience beyond the bare necessities for a night out, makes the Schwartzs’ take on the nightlife business one to be admired. Beyond the lucrative cloak of nightclubs and bars are these two, constantly reinvesting into their businesses for longevity. “We’re lucky that the hard work is also fun,” said Joshua.

Bars Lounge Clubs Nightlife Employees Only singapore nightlife joshua and sarissa schwartz sjs group pangea bang bang lulu's Joshua Schwartz Sarissa Schwartz
Beatrice Bowers
Features Editor
Beatrice Bowers writes about beauty, drinks, and other nice things. When not bound to her keyboard, she moonlights as a Niffler for novels and can be found en route to bankruptcy at your nearest bookstore. Don't tell her boss.
Drinks Beauty
Sign up for our newsletters to have the latest stories delivered straight to your inbox every week.