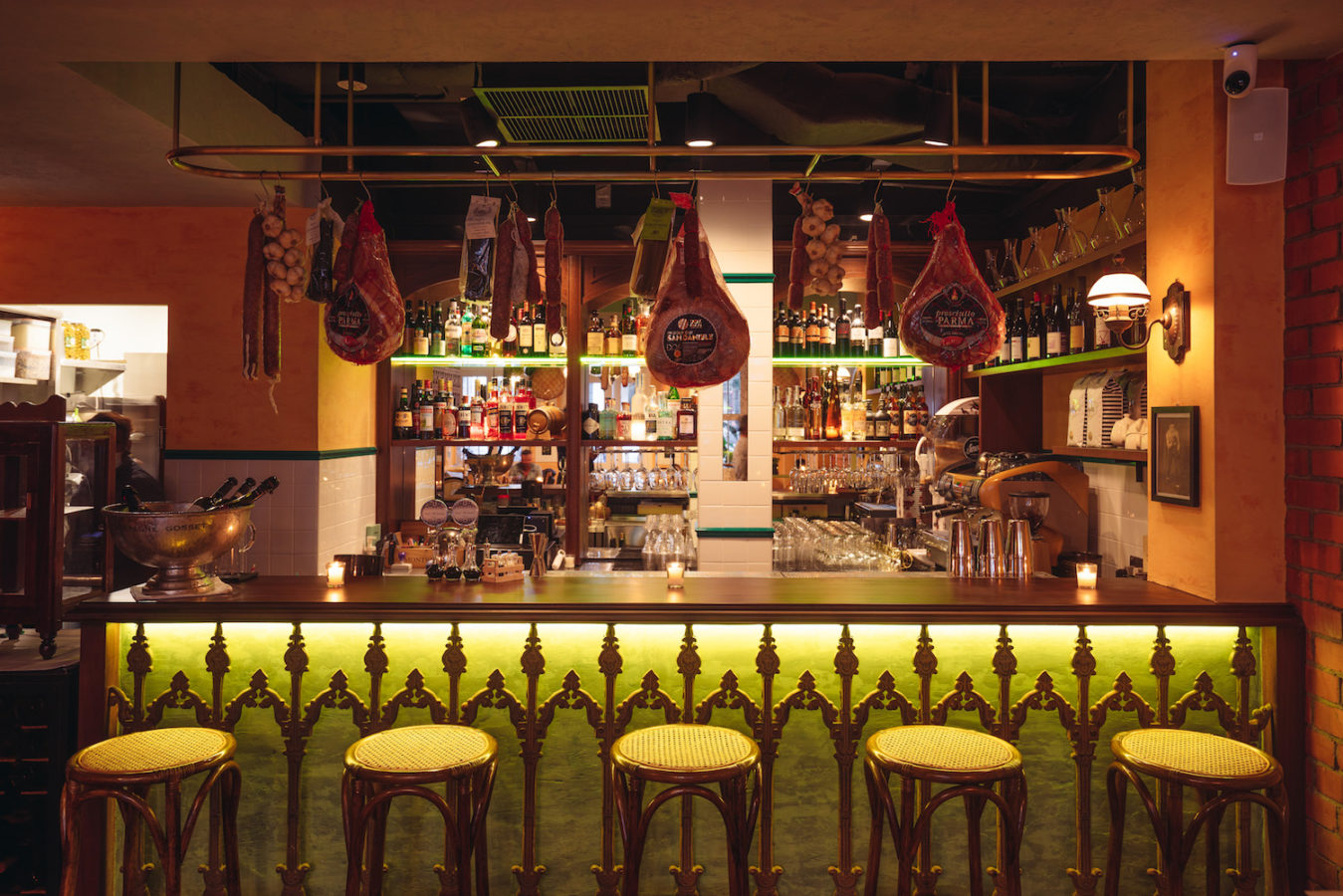 Food and drink have always been able to transport the mind to places outside of the here and now.

At a time where travel is out of reach, this power is felt evermore intensely, especially in spaces like Bar Milano.

Parked within Keong Saik’s Kēsa House is this new 38-seater gastro-bar that looks and feels like a slice of Naples transplanted into Chinatown. Dimly-lit and terracotta-tinged, this homely nest takes the taverna concept and refashions it into a place where the hungry and thirsty in Singapore can go for spritzes, pizzas, and other dishes that don’t stick to the same old Italian restaurant mould.

We’d expect little less than thoughtful theatrics when it comes to decor for Bar Milano. The destination is, after all, founded by the SJS Group, which also runs Bang Bang, Lulu’s Lounge, Employees Only, Pasta Bar and Papi’s Tacos, to name a handful. This time, a movie set designer was hired to lay out Bar Milano, which explains the restaurant’s likeness to a quaint café in Europa.

Italy in the ’60s is the launchpad for the cosy design, and the space also makes reference to the timeframe via its equally curated soundtrack.

You might also like…
Gear
Maserati debuts the Ghibli Hybrid, its first ever electrified car
Food & Drink
Diageo to open its Prima & Ultima collection of fine whiskies for bidding

Once you’re in, you are face to face with the grand wooden bar, framed by low-hanging hocks of cured meats and a cabinet of cheese. While what is on the outside is an enticing story for later, it is the bottles that call for your immediate attention. All the amaro and vermouths on the wall are a peek into Bar Milano’s exciting spritz offerings, and yes, we’re talking more than just Aperol here.

The Bianco Spritz and the Lambrusco Spritz are two fantastic starting points. These spritzes are yin and yang. The Bianco Spritz (S$20++) is liquid brightness, with dry Cocchi Americano and a housemade sweet and sour tincture topped with Prosecco for a welcome fizz.

The dark Lambrusco Spritz (S$20++) reinvents the sparkling Italian red wine, splicing the pour with homemade cherry syrup and Mancino Chinato for an almost-syrupy glass of ripe summer fruit. Order the former if you’re a fan of a gin and tonic, and the latter if sangrias are your go-to.

Also, an Italian bar is nothing without a good negroni, and at Bar Milano, that option is the Sbagliato (S$20++), a riff on the negroni where Rinomato and Cocchi Chianto is used instead of Campari, then topped with prosecco for an effervescence that the original lacks.

Outside of spritzes, drinks include classic European cocktails (including a Bloody Mary made with French-pressed San Marzano tomatoes that completely change the game), wines and spirits.

It is tempting to tag Italian restaurants with the kind of fare you see a nonna make on television, but Bar Milano is a thankful departure. Instead, the food menu reinvents some Italian classics found during aperitivo hour, and introduces us to something new.

Olives Ascolana (S$10++), where the fruit is stuffed with pork, then breaded and fried, makes for a briney, moreish partner for any cocktail. For something more substantial to munch on, the steak tartare (S$18++) with anchovy butter tastes almost like raw tuna on sourdough, while the burrata and peaches (S$28++) are a sweet and savoury step up from plain tomatoes. The latter also uses 25-year-old balsamic vinegar to add sweetness and acidity to the milky round of cheese.

For mains, the starring role goes to Pizza Fritta. Yes, deep-fried pizza. And no, this is not an American fantasy, it is a street food classic rarely seen outside Naples, where the dough is deep-fried (think fritter-style) and topped or stuffed with tomatoes and cheese.

At Bar Milano, the Napolitano (S$18) is the recommended bet, served with the simple trifecta of buffalo mozzarella, basil and San Marzano tomatoes. The generous serving of tomato sauce makes the pie a touch sweet, but if you’re a fan of the fruit, this is your jam.

Close off your meal by going back to basics with a Chicken Milanese (S$22++), where chicken breast, pounded paper-thin, is breaded, deep-fried and served with a side of apple and fennel coleslaw.

Outside of dinner, Bar Milano also has a day menu with breakfast bites, sandwiches, salads and aperitifs.

The Keong Saik neighbourhood is always reliable for exciting new food and beverage options, so Bar Milano definitely fits the bill. Not only does it enrich the array of Italian dining options we have on the island, but a bar dedicated to spritzes amidst our sweltering weather is also always a win in our books.

Bar Milano
Address
55 Keong Saik Road, #01-02 Singapore 089158
Website
Website here
bar review bar milano
Beatrice Bowers
Features Editor
Beatrice Bowers writes about beauty, drinks, and other nice things. When not bound to her keyboard, she moonlights as a Niffler for novels and can be found en route to bankruptcy at your nearest bookstore. Don't tell her boss.
Drinks Beauty

Bar guide: where to drink in Bukit Timah