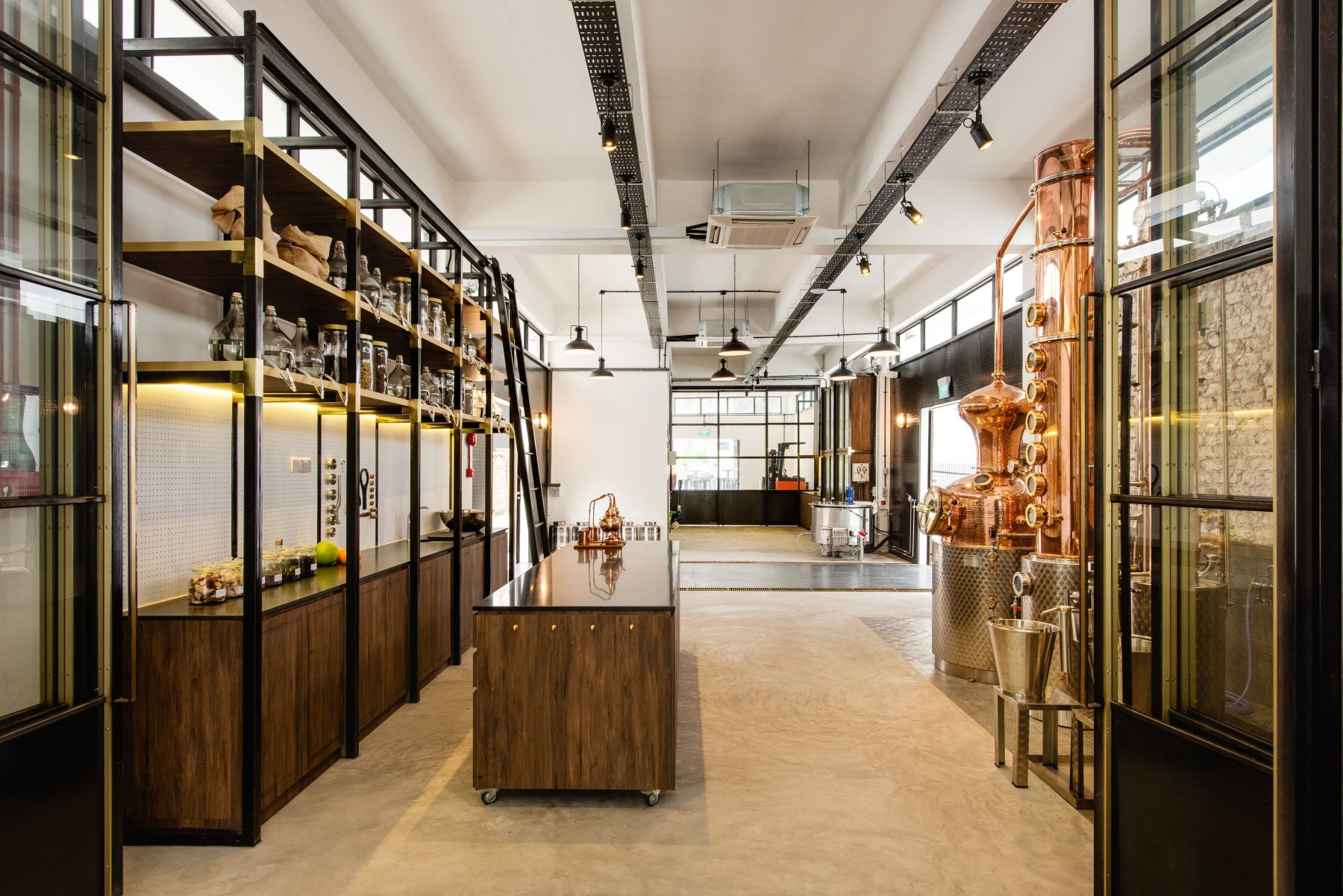 Chupitos is an icon in Clarke Quay. There’s little one can do to contest that. The bar, which focuses on a variety of shots, is a one-of-its-kind spot that draws tourists and locals by the hordes on a weekend night. In spite of the destination’s magnetism, you’d never expect for a shooters bar to be the sibling of Singapore’s first multi-concept craft spirits distillery, Brass Lion.

Both are run by Jamie Koh, with Brass Lion being a project six years in the making. Located at Alexandra Terrace, the newly-opened distillery produces what Koh terms Singapore dry gin. Twenty two botanicals constitute the spirit, and a bulk of these are sourced from a five-kilometre radius from the distillery in order to enforce the provenance of the gin. To double down on its true blue Singaporean identity, the base of the spirit is New Water, which Koh further softens to ensure the smoothness of the final product.

Though Brass Lion is not the first made-in-Singapore gin by any means — that accolade goes to Tanglin Gin, which opened in August — it does stand as the first multi-concept distillery on the island. The address is home to not just a custom-made copper still from Germany that produces the gin, but a tasting room where patrons can enjoy cocktails, a research and development lab, a herb garden that grows some botanicals used in the gin, and a retail space. Visitors can opt to tour Brass Lion Distillery or sign up for workshops that allow them to create their own gin from baby pot stills, with ingredients sourced from both the garden and a library of botanicals available on-site.

This expansive scale fully justifies why the project only came into fruition in 2018, despite being in the works since 2012. Come 12 October, you too will be able to head down to Brass Lion to experience it all for yourself. Before then, we speak to Koh to find out more about how she went from being the mastermind behind a shots bar to the founder of such an ambitious venture, and what we can expect from Brass Lion Distillery.

For more information and to pre-order bottles, visit www.brassliondistillery.com.

How did you go from running a shots bar to starting a distillery?

After I began Chupitos, I took a year off. In that year, I went to travel around the world, and during that time, I realised Singapore did not have its own spirits, even though out most iconic cocktail was obviously the gin-based Singapore Sling. That same year, I enrolled myself into distilling school in the Washington State to learn the ropes because I wanted to begin my own distillery.

Was it tough, learning how to distill?

It’s not something you learn right away. I did a course, and that was a lot of theory. After that, I went to do some internships back and forth over the span of a couple of years. I went around just pleading with people to take me on, promising that I’d work for free. Eventually, a distillery in the Black Forest in Germany and the Charleston Distilling Company in America took me on.

It must have taken a long time to get Brass Lion started.

The process began in 2012, and at that time, there was no precedent. There were many issues with regulations, so we had to work together with the authorities to get things running. Gin is classified as a food in Singapore, but we aren’t in a designated food zone because of the extent to which we collaborated with the government to ensure we got the location we wanted. If we had just accepted to be in the food zone, honestly Brass Lion would’ve opened three years ago.

You said Singapore needed its own gin, so you have created one with 22 different botanicals, which is a massive array. What was the process of creating the recipe?

I was working with this master distiller in Germany to create Brass Lion. To give him a sense of what local flavours were like, I packed a suitcase with 40 different herbs and spices and brought it to him. We distilled each ingredient individually for four days just to see what kind of profile each one had, and from there, we created a blend. There was always an end goal in mind — a juniper-forward gin with citrus, so it’s refreshing to drink. We just had to figure out how to get there.

Another two things we do to ensure the flavours are concentrated is hand-crushing and macerating the juniper berries for 36 hours before distillation. We also peel all the citrus fruits used in Brass Lion by hand three days prior to a distillation run, and sun-dry the rind to intensify the zestiness.

Why produce a pink gin and a butterfly pea gin too?

Well, I thought it would be nice to have some variation. The pink pahit gin has some history to it. Gin Pahit was a cocktail that came to Singapore with the British. It was the drink of the day. You have gin on the rocks with a dash of bitters, and that was a Pahit. It’s fallen out of fashion now but I wanted to bring some of those old flavours back.

As for the butterfly pea gin, it’s just something we wanted to have. It’s pretty, of course, but also because we grow the flower in our herb garden for use in this gin too.

What foreseeable difficulties do you think Brass Lion will face in a market like ours?

There’s been a big gin boom going on across the world, and this means two things. More people are drinking gin, but there is also a surge in gin production across the globe. Every single day, there’s a new expression that released. The market is so saturated and competitive, so a big challenge is staying relevant. Brass Lion has to stand out from the rest.

You brand Brass Lion as a craft spirits distillery, so what other spirits are there in the works?

We have plans. Right now, our focus is the gin, but in the future, we plan for other Singaporean-style spirits to be made, like a rum.

brass lion distillery singaporean gin jamie koh chupitos brass lion gin
Beatrice Bowers
Features Editor
Beatrice Bowers writes about beauty, drinks, and other nice things. When not bound to her keyboard, she moonlights as a Niffler for novels and can be found en route to bankruptcy at your nearest bookstore. Don't tell her boss.
Drinks Beauty