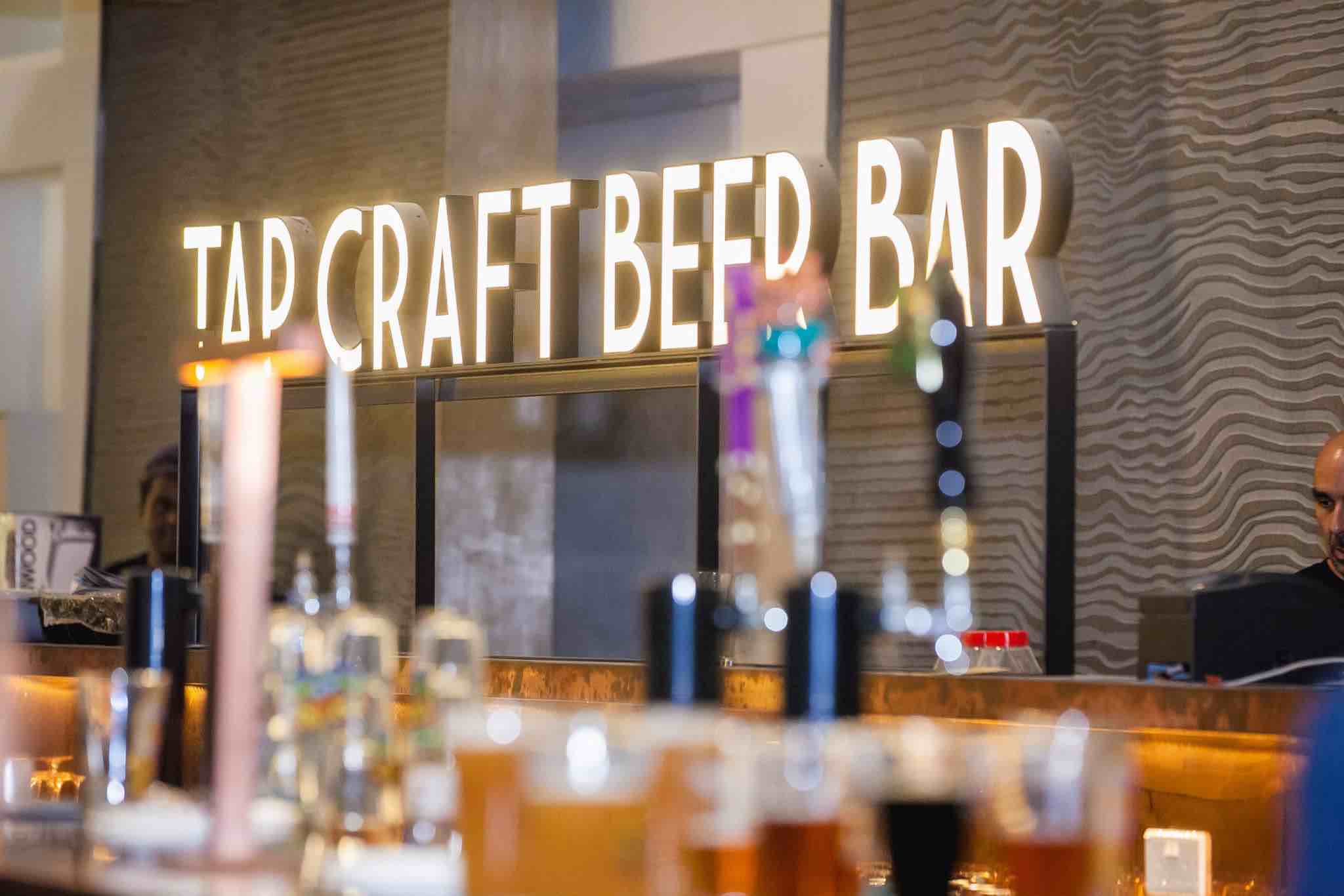 Singapore’s love for beer continues unabated as more taprooms open up around the country. With so many options, we rounded up 17 of the best craft beers bars in town.

Since the last time we visited this topic, more venues have sprouted up all over the island. Mikkeller, for instance, launched their latest iteration in a Singapore hawker centre. Ziggy Zaggy serves local and international brews along Kallang River. And Burger Bar offers beers from cult brewers around the world. Read on for more. 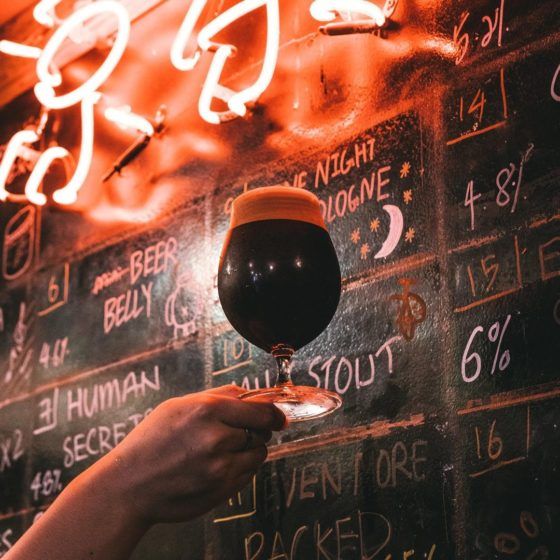 It’s a prosperous time to be a local microbrewer thanks to Good Luck, which only serves craft beer made locally. From their 12 taps, check out examples from Off Day, That Singapore Beer Project, and Niang, as well as General Brewing Co. and Brewlander. Pair them with the bar’s food menu of dim sum and har cheong kai karaage. 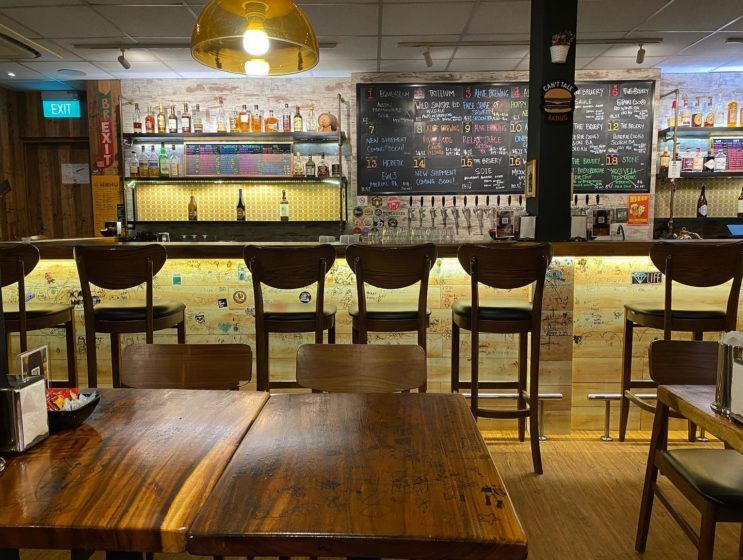 Burger speakeasy meets crusty New York diner, Burger Bar takes some of the world’s most sought-after craft beers and pours them from their 18 taps in Singapore. It’s predominantly boozy IPAs here, and recent offerings include UK’s Northern Monk, Maltgarden from Poland, and Sori, a microbrewery from Estonia. When hunger strikes, order one of their smashed patty burgers and cheese fries. 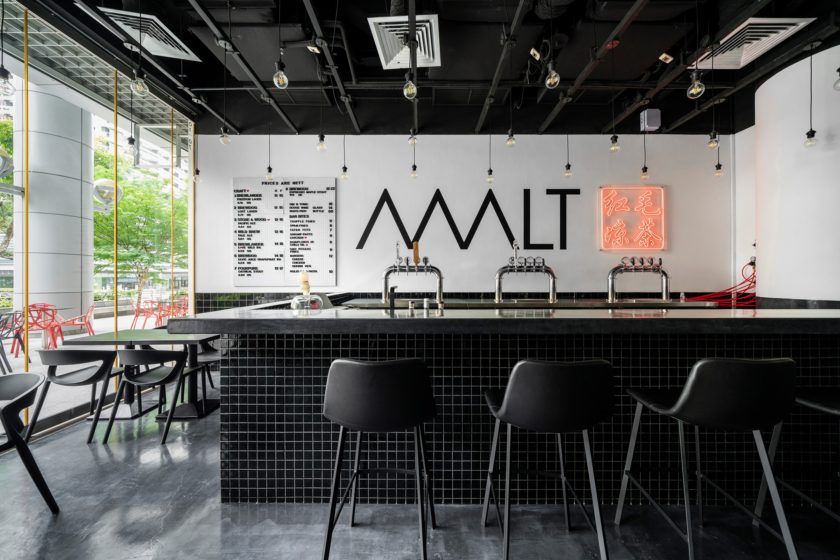 Malt’s logo, which stylises the M and the A together, is meant to be a wordplay on the Hokkien acronym for beer. They rotate new ones into their 12 taps every week, and available now are Goose Island’s flagship IPA, an imperial tropical sour from Australia’s One Drop, a fruity pale ale from UK brewer Overtone, and Alive Brewing’s New England IPA. For a crushable beer, there’s always Malt’s refreshing crisp house lager. 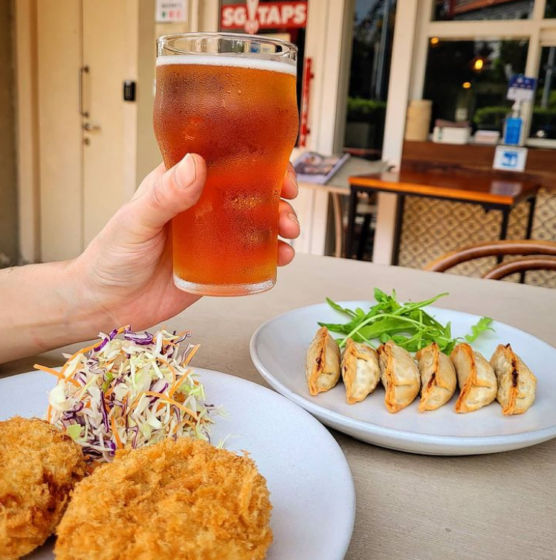 Like the name hints, SG Taps focuses on Singapore craft beer. Among the 20 taps, you’ll find the big local players including Brewlander and Brewerkz, as well as smaller brewers like Able, Pink Blossoms, On Tap, Sunbird, Island Nation, and Civilization. Globally, Hong Kong producer Young Master and Anderson Valley from California are pouring at the moment, to be enjoyed with Japanese-inspired dishes like renkon chips and katsu curry. 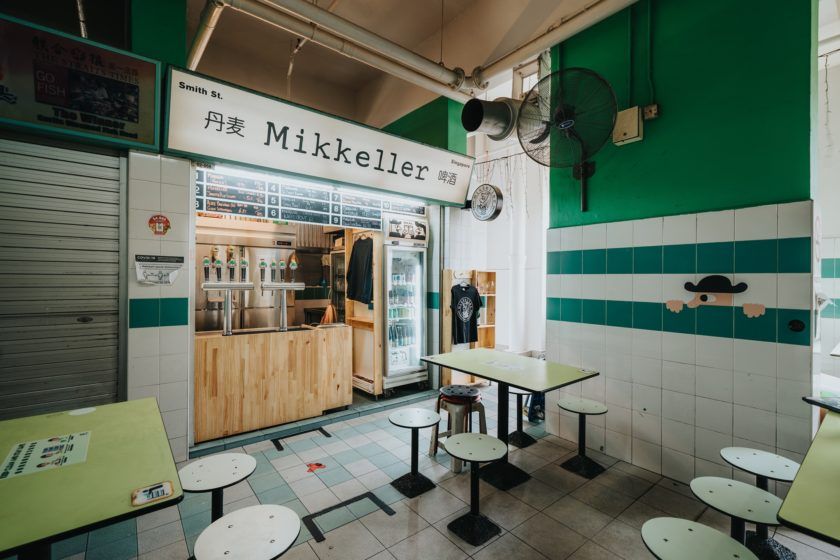 Mikkeller Singapore has been in many guises from a shipping container to a shophouse, but this hawker stall is the tiniest branch of the world-renowned Copenhagen brewery. Somehow, they managed to squeeze in ten taps, which is currently pouring their blueberry lambic and coffee stout right now. Other producers are also represented, from Moon Dog to 71 Brewing. 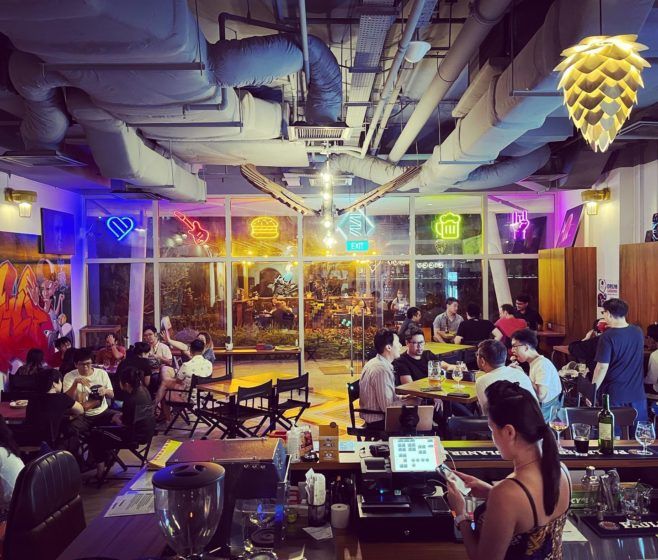 Ziggy Zaggy is the passion project of musician and certified cicerone Ngak Ng, who turned his love for craft beer into a taproom by Kallang River. His 18 taps currently offer renowned styles from North Coast’s Old Rasputin’s Russian imperial stout to the highly sought-after beers of Cloudwater and Gipsy Hill. Natural wines and sake are also available, with a food menu of jambalaya, biscuits and gravy, and jumbo dogs. 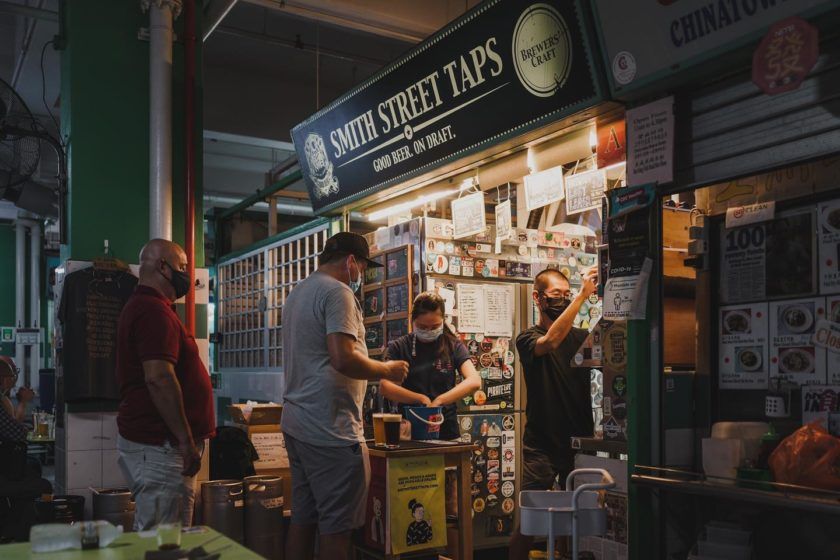 One of the pioneers of selling craft beer at a hawker centre, Smith Street Taps has revitalised a little corner of Chinatown Complex Food Centre with its eclectic range of artisanal brews. Founded in 2014, their 12 taps currently pour a locally-made helles lager from Alive Brewing, hazy IPA by Australian producer Deeds, pastry stout from Ponoma Island in Manchester, and a honey ale from Lion Brewery in Singapore. For sours, look to Japanese brewer Ichibou Senri or That Local Beer Project, which makes their Kiam Sng Di gose from guava and salted plum. 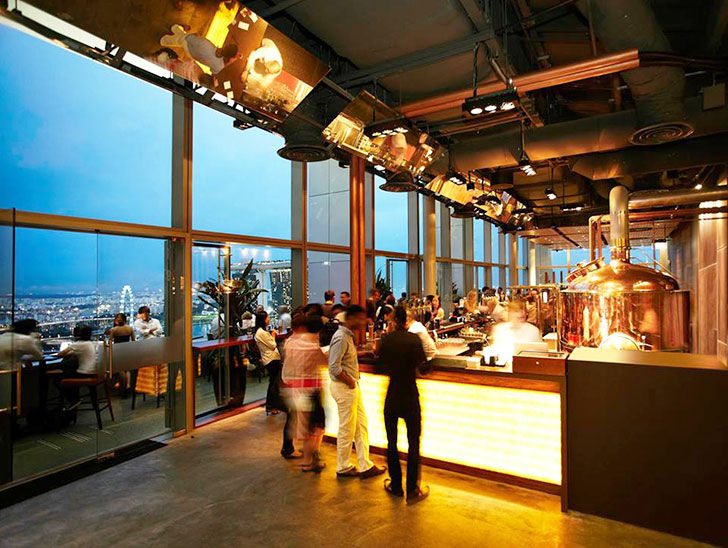 Situated on the top floor of an office building in the Marina Bay Financial District, LeVeL 33 is a fantastic craft beer bistro bar to go on a date, thanks to the stunning views, or just to chill out after work. The industrial setting typically features four beers crafted with olden European flavours in mind, with the occasional seasonal brews making an appearance. 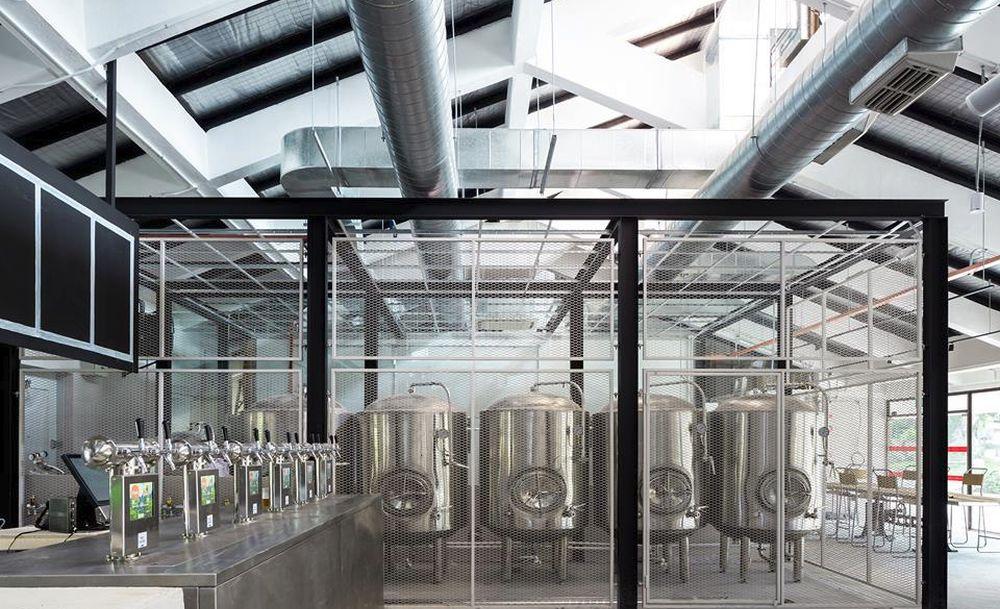 The 10,000 sq ft microbrewery serves up an array of craft beers catered to local palates, including the SPA (Singapore Pale Ale) — a bitter, oak-natured IPA with flowery notes. All the beers are brewed in vats in-house, and you can also spot a large wood smoking even were meats are slow-cooked everyday. It might be on a far-flung corner of the island for non-East Siders, so this is one to check out on a lazy weekend evening. They recently opened another location near Esplanade MRT Station. 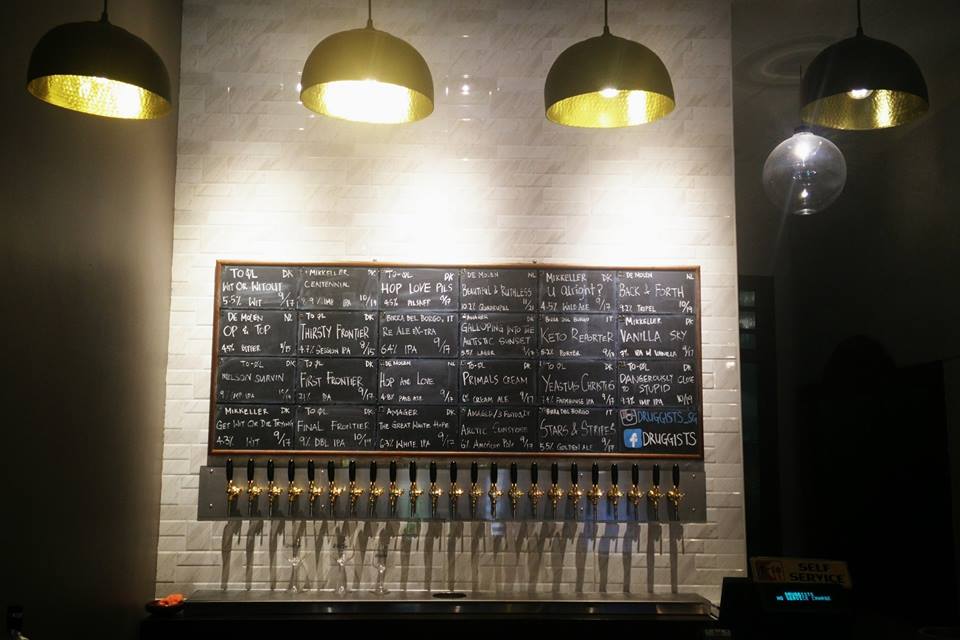 Druggist’s display of 23 taps lining the wall beneatha massive chalkboard is probably the second most Instagrammed bar decor other than the famed “风和日丽” lights at Loof. Druggist shares a building with the Singapore Chinese Druggists Association, and it boasts one of the most extensive selections of sour beers, imperial stouts and IPAs. The snacks are distinctly local, like coffee pork ribs, szechuan pickles and sambal ikan bilis. 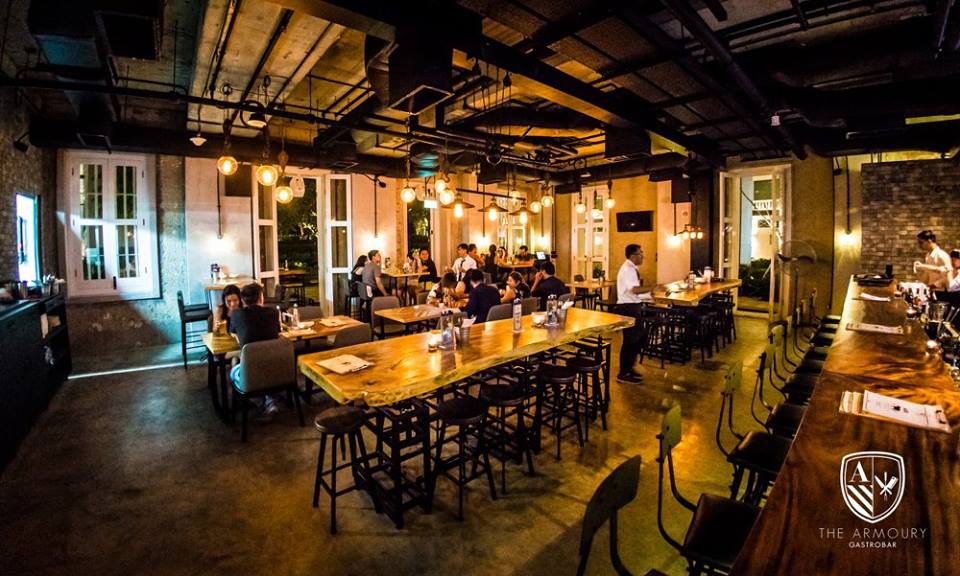 What used to be an actual military armoury is now a trendy watering hole for the hip after-office crowd at South Beach Towers. If you like your bars with a pinch of swank and a hint of stature, check out the Armoury. It has a standard fare of beers from USA, Japan and Europe on tap, making it a good stop for a quick introduction on the craft tipple. Hunker down with an ice-cold pint, and raise your glass to order some fries double-fried in duck fat. It’s a calorie assault well worth it. 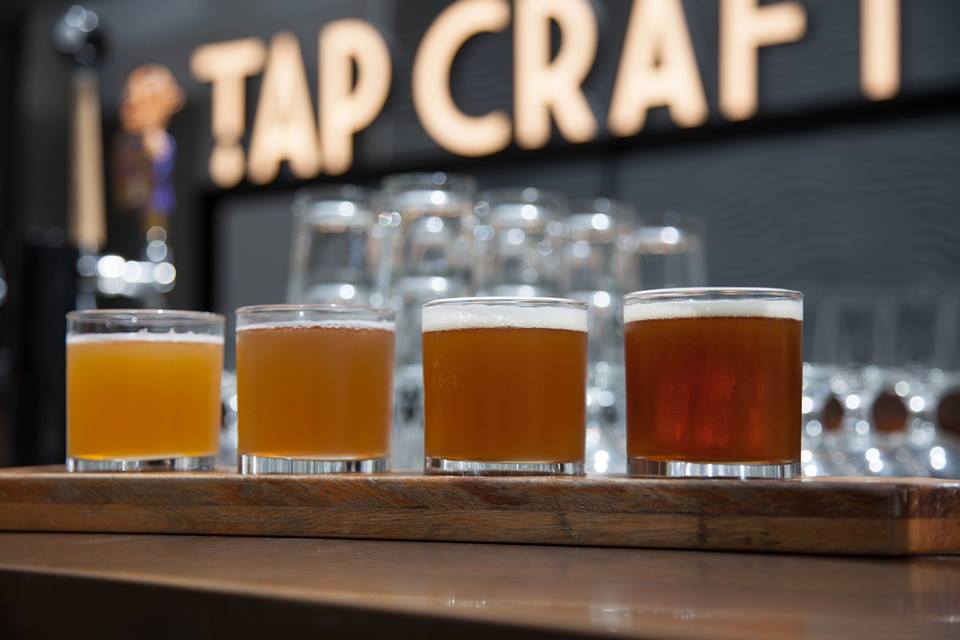 TAP situates the obscure love for craft beers in the centre of the city. 20 craft brews are available on tap, aside from over 80 craft ciders, beers and sodas — it’s a veritable arts n’ craft store for beer worshippers, except with alcohol instead of paint bottles. Familiar names like Left Coast, Green Flash and co. make their appearance at TAP with tons more unorthodox expressions, alongside a menu of burgers, cold cuts and tapas to keep your beer-guzzling soul satiated. 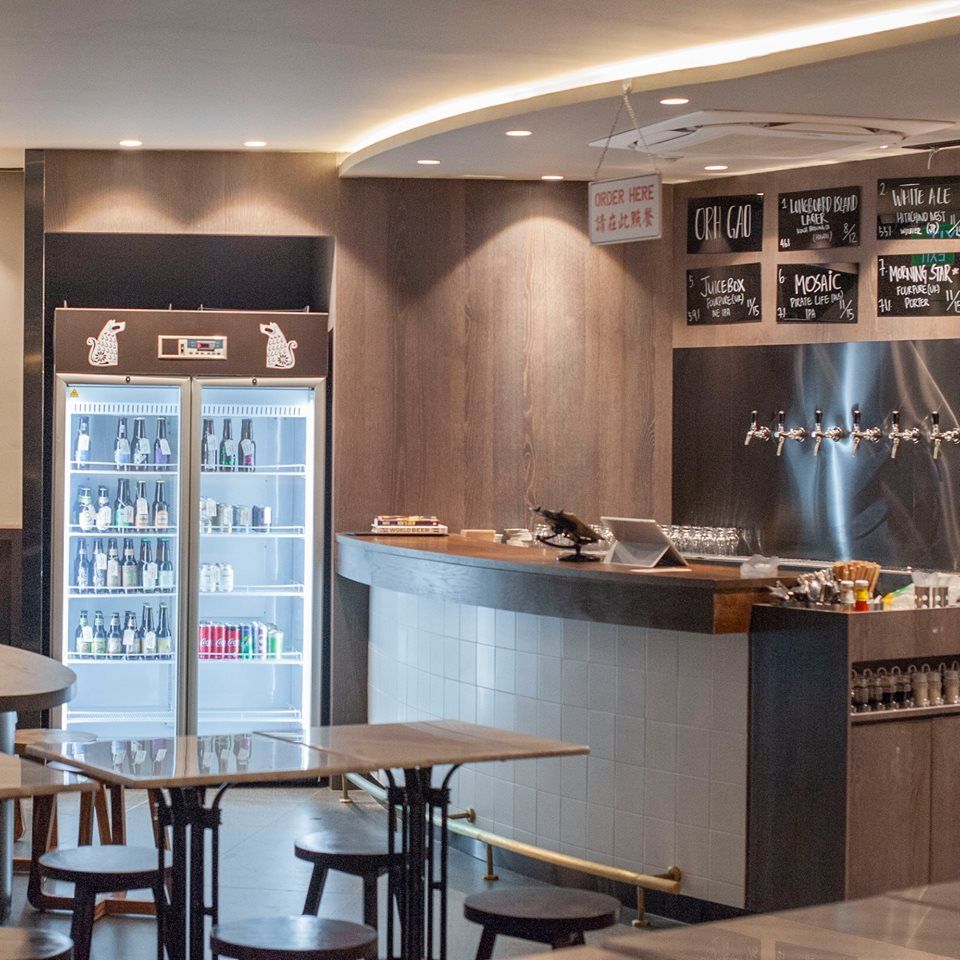 In a country where having a beer in the kopitiam counts as a part of national culture, it’s no wonder we have waves of craft beer bars parked in prominent coffee shops around the island. Orh Gao Taproom is one such beer post parked in the heart of Botanic Gardens. Known as Killiney Kopitiam by day, the whole space becomes a taproom come 4pm. No kopi kettles will be in sight. Instead, you have a bar serving up ten different beers on tap, which rotates seasonally, alongside a lengthy selection of bottled brews from craft producers around the globe. To add to the appeal, Orh Gao Taproom also serves Asian-style bar bites like har cheong kai chicken wings to line your stomach as you plough through some pints. 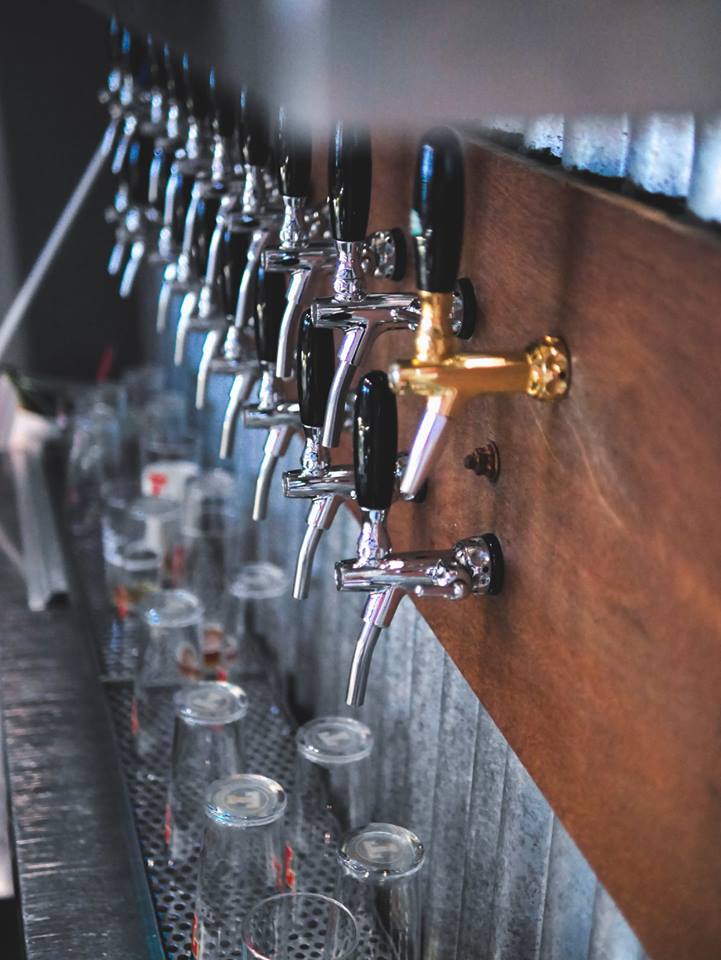 Rarely do you have neighbourhood joints as cool as Nickeldime Drafthouse, so if you live in Novena, consider yourself lucky. The bar serves up 19 different beers on tap, sourced from Asia to America, and a dizzying array of bottles. To supplement your session, they’ve got satisfyingly greasy grub like burgers, garlic fries and their signature sourdough pizzas, as well as live soccer matches televised for ardent fans out there.

Thursdays to Tuesdays, 11am to 11pm 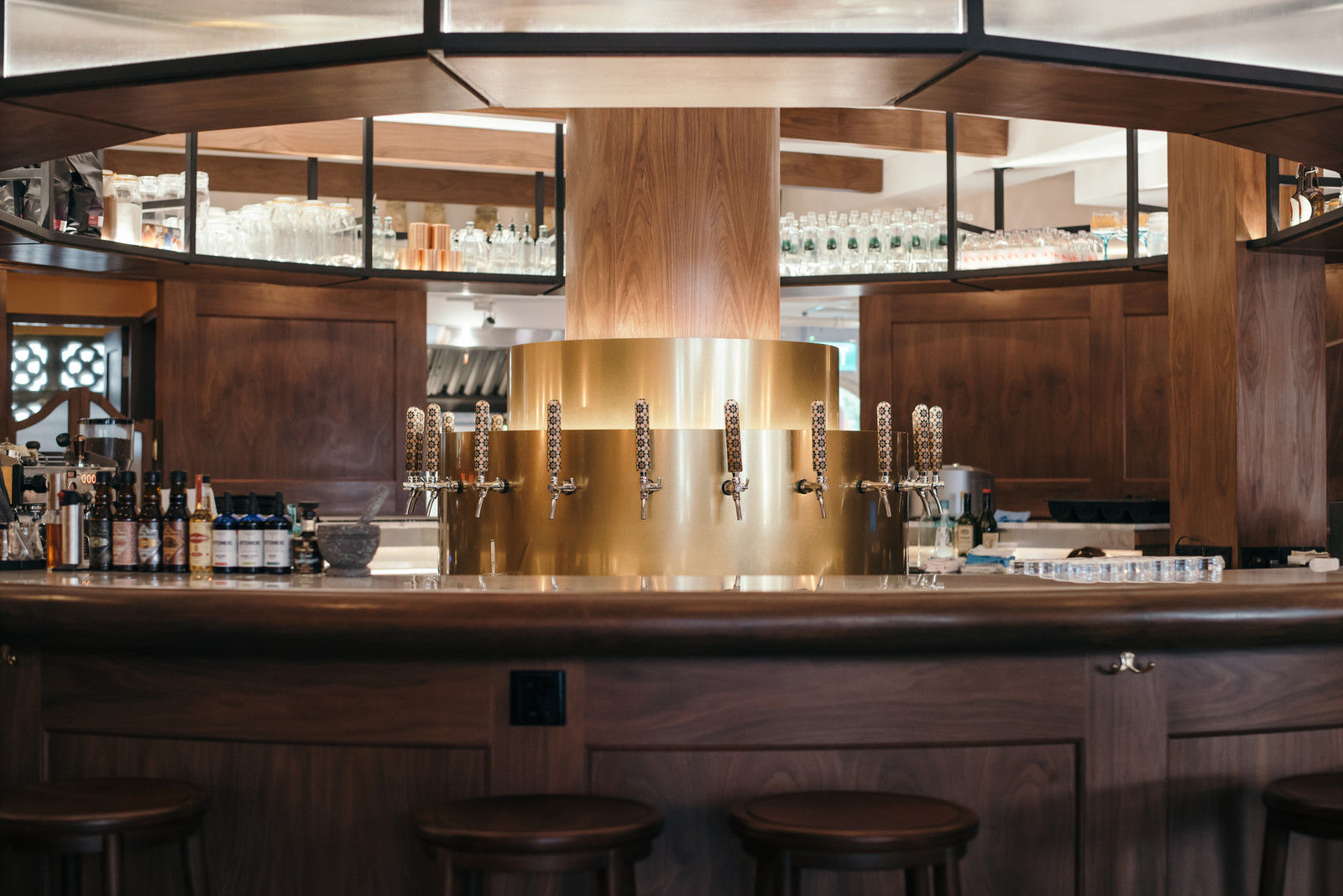 Keong Saik’s thriving restaurant-bar, The Guild, is a collaboration between Hong Kong’s Young Master Brewery and Hong Kong-based household name, chef Vincent Lauria. Inside the spacious shophouse is a round bar spotted with 19 taps of Young Master Brewery’s signature and seasonal brews to complement the food menu, packed with Asian-American fusion dishes that utilise local produce where possible. Read our full review here. 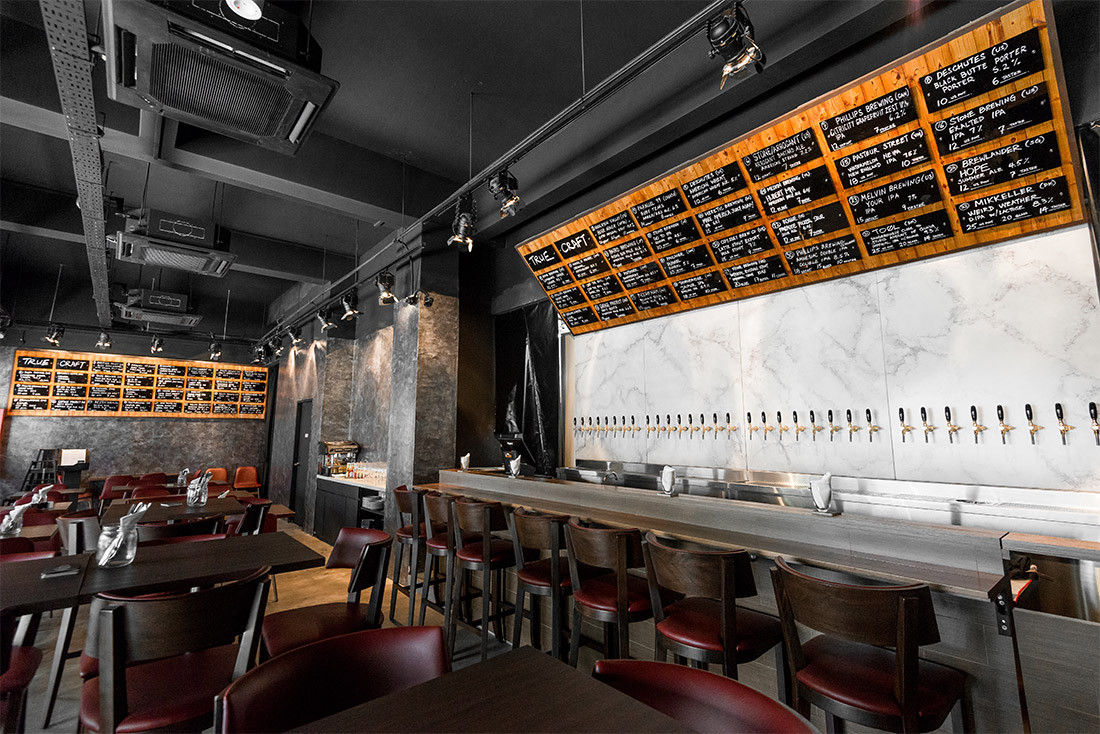 Having 30-odd beers on tap is no mean feat, which makes American Taproom an impressive craft beer haunt, in our books. There’s a ton of IPAs on the menu, along with stouts, meads, ales, and everything else. One may expect all their brews to come from the U.S., but there’s a pretty international selection to scour. The American element in the bar’s namesake comes from the food menu, which is lined with all-American snacks ranging from burgers to buffalo wings. Besides their original location on Waterloo Street, they have another outlet in Geylang. 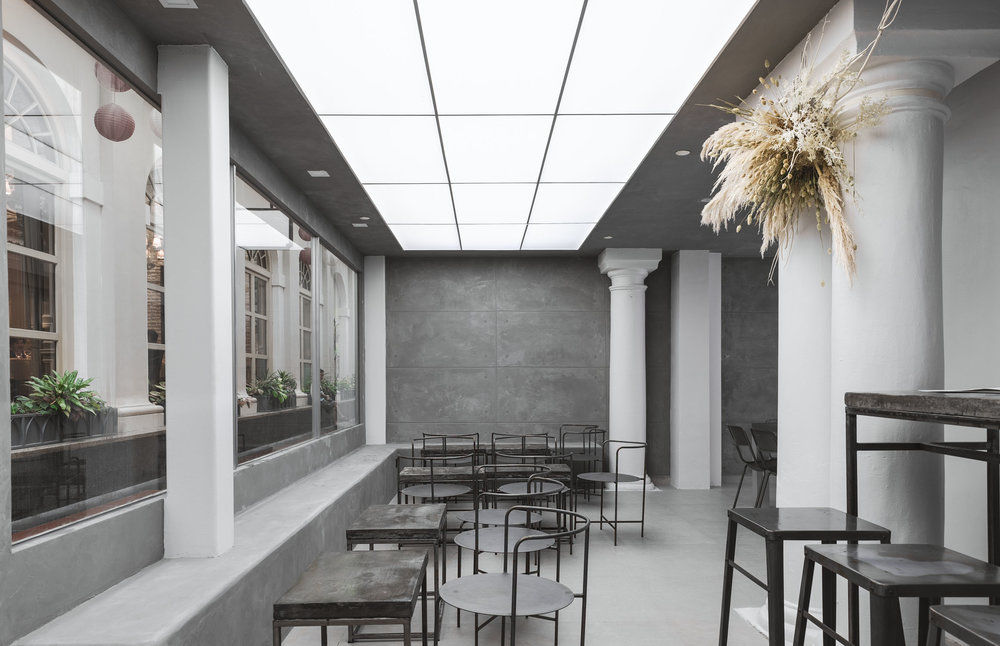 Having a pint at Almost Famous is quite an experience. The minimal, industrial-looking space looks more like a showroom than a beer bar, but it is deliberately designed to let your senses focus entirely on the beer. The selection warrants your undivided attention, given that it hones in primarily on beers produced by small, regional brewers. There are 16 taps that rotate on occasion, so you’ll have plenty of opportunities to sample Asia’s finest pours throughout the year.