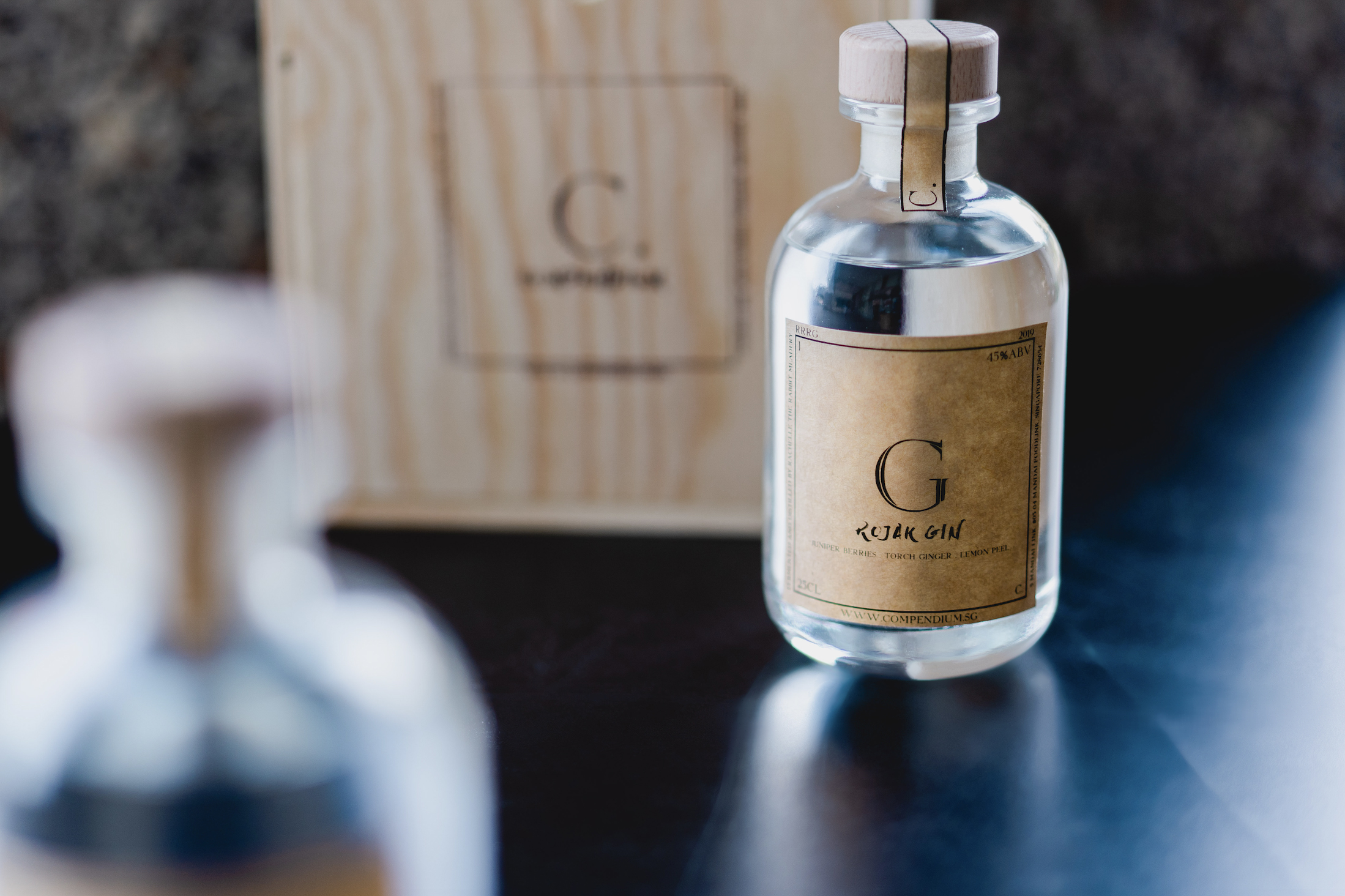 How local distiller Compendium is breaking the rules of spirit production

Every local distiller we have spoken to thus far has a brand manifesto that guns to express the flavours that have shaped Singapore in a bottle. Compendium, a homegrown spirits producer, aims to do the same, but they do so with a decidedly different approach that challenges the norms of liquor production, not just in our country, but the world.

Compendium is a joint effort between Simon Zhao and Vic Ram. Both are industry veterans. Former chemical engineer Zhao is also the founder of Rachelle the Rabbit, Singapore’s pioneering meadery, while Ram is an experienced bartender that doubles as the brand ambassador. When the duo decided to branch out into producing spirits, they had a simple notion of what the concept would be. “Singaporean flavours are what we are most proud of,” said Zhao. “So we wanted to bring them to the world”.

“Singaporean flavours are what we are most proud of, so we wanted to bring them to the world.”
Simon Zhao, co-founder of Compendium

With that, Zhao and Ram worked tirelessly to create two Singaporean gins that would launch the brand — a Rojak Gin and a Chendol Gin. These inspired gins wow because they taste like the food each touts on the label. In order to achieve that parity, Zhao and Ram rewrote the blueprint of crafting a gin. Instead of purchasing a neutral grain spirit for the base as most distillers around the world do, Compendium decided they would ferment their own base and apply that start-from-scratch method to everything their brand would release from thereon.

The Rojak Gin is built upon fermented honey, essentially mead, which is then distilled and re-distilled with choice botanicals, while the Chendol Gin replicates the process with fermented gula melaka. According to Zhao, this process is far more time-consuming but makes all the difference.

Compendium also does not plan to stop at making gin. Their intention to delve into the broad world of booze sees the brand releasing a Kopi-O and Teh-O liqueur prior to National Day because few things are as inscribed into our collective food culture like these kopitiam beverage classics. These liqueurs are based on a housemade rum steeped with coffee beans or tea leaves in a manner that combines cold brew with the old-school method of using “kopi socks” as filters.

The expressions Compendium has put out thus far all channel Singapore in taste, which is remarkable enough, but the fact that the distillery achieves that by challenging the standards set for spirit production is visionary.

Here is what Zhao and Ram have to say about the innovative tenor that underlines Compendium.

What sparked the shift from mead to gin production?

Simon Zhao (SZ): When I began fermenting mead, I naturally thought of how mead would taste like when it is distilled. Everyone knows that distilling beer gives you whisky, essentially, and that distilling wine would give you brandy. Distilled mead was something no one knew about, and there’s not a word for it. I started experimenting with it and it turned out to be pretty good, and that’s how I delved into distillation.

What makes Compendium stand out from other local distilleries?

SZ: I think the name of our company already best describes our whole project. We are Compendium, which means “a collection of fine things”, and in our case, fine spirits. The general idea of Compendium to produce every spirit from the fermentation stage first, and to do so in-house. One of the things we are promoting is a diversity of spirits, as well as culture. That’s why our tagline is, “distilling diversities”.

Vic Ram (VR): We want to challenge the brackets of spirit production as much as we can, and bring Asian culture to the world with our spirits.

Food & Drink
A Singaporean distiller is making chendol and rojak gin — here’s what it tastes like
Why did Compendium decide to create its own base spirits for the gins in-house, rather than purchasing your neutral grain spirit like most distillers do?

SZ: I did not want to make gin like what everyone else was doing. We did not choose to mimic the components of a traditional London Dry. Instead, we focused on local flavours centred on base spirits fermented in-house. The base spirits we made bears a lot of difference because it is far different from what anything else on the market tastes like.

“If we all stuck to tradition, no one would innovate.”
Vic Ram, brand ambassador for Compendium

VR: Our goal is to take our brand beyond Singapore, and if we want to introduce Compendium to the world, it it has to be delivered with a Singaporean signature. Why do I want to bring a product everyone has seen before to the world? There are standards set for gin production, yes, but if we all stuck to tradition, no one would innovate. Someone had to break the barriers.

Of all the local foods you could have turned into gin, why chendol and rojak?

VR: We did not approach making our gin with the dishes already in mind. We had a general idea, and it was through research and development when we began creating gin with ingredients like torch ginger flowers and gula melaka, did we see the similarity between the food and the drink we were creating.

Will you plan to stick to creating the traditional spirits like gin and whisky, or experiment with regional variants too?

VR: We want to be creators, not recreate products that everyone has already done.

compendium spirits singaporean distillers
Beatrice Bowers
Features Editor
Beatrice Bowers writes about beauty, drinks, and other nice things. When not bound to her keyboard, she moonlights as a Niffler for novels and can be found en route to bankruptcy at your nearest bookstore. Don't tell her boss.
Drinks Beauty