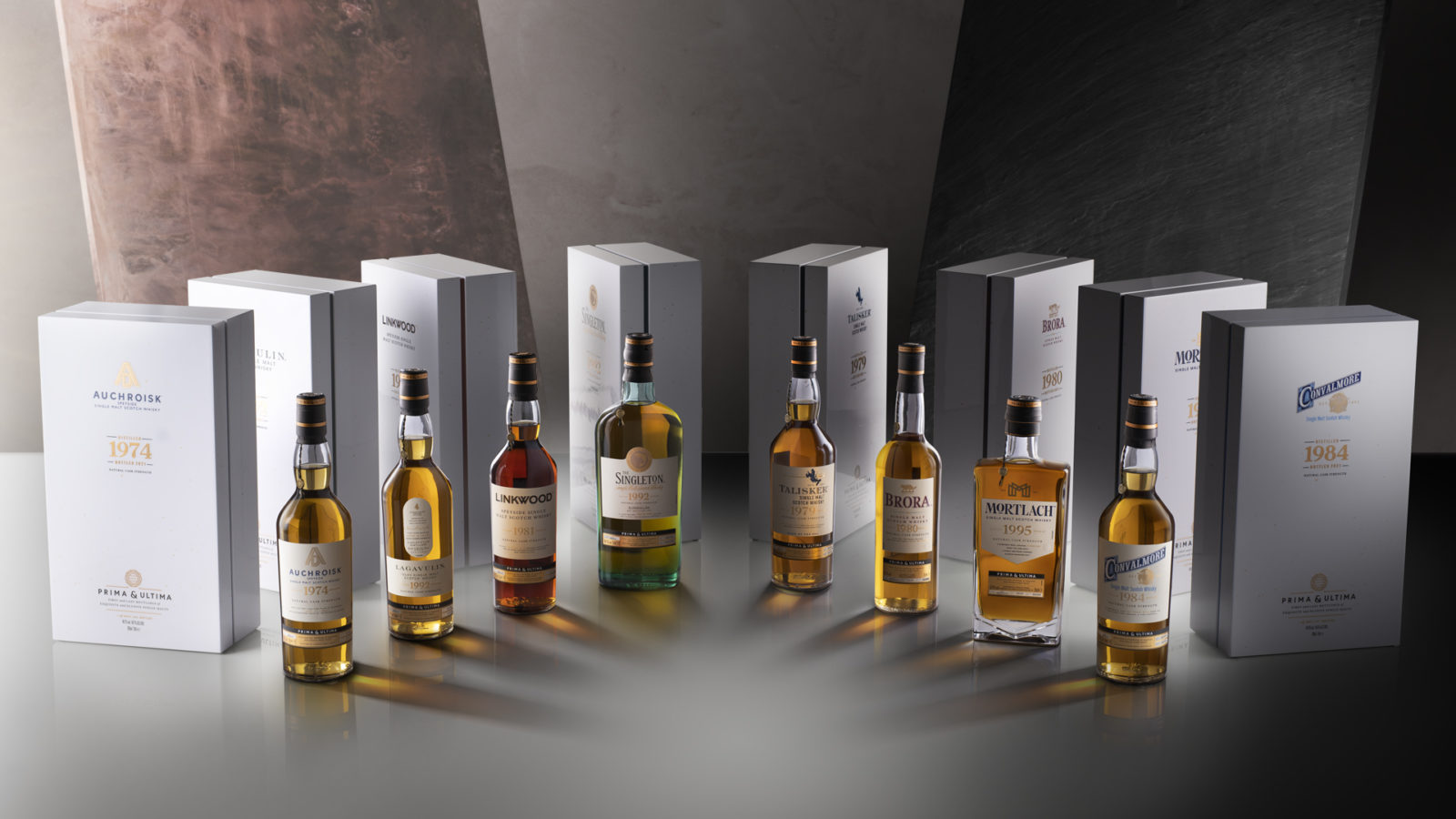 The collection culminates in highly limited single vintage malts that are either the first or last bottling of their kind.

For collectors and whisky afficionados, this second release represents a piece of distilling history. It is an opportunity to own an ultra-rare spirit drawn from casks that can never again be experienced by the world.

Each release of the collection is curated by one of Diageo’s most celebrated master blenders. This year, that distinction goes to Maureen Robinson who takes up the mantle from the curator of the inaugural Prima & Ultima, Dr Jim Beveridge OBE.

With over 40 years at Diageo, Maureen Robinson hand-selected each whisky to make up the second release of Prima & Ultima. With a heightened knowledge of its Single Malt portfolio, Maureen curated this year’s edition to celebrate some of her most outstanding spirits that beckon a flavour and history rarely encountered.

“This is a selection of very special Single Malts – some that have never before seen the light of day and others that are the fleeting and final examples of their kind,” expressed Robinson. “Each bottling shares a glimpse into the history of Scotch and one that I am honoured to have witnessed in person.”

Honouring the sunrise and sunset in whisky history of some of Scotland’s most prestigious distilleries, this year’s gathering represents a wide breadth of single vintage malts from Diageo. This year includes new appearances from ghost distillery Convalmore, a piece of history from Auchroisk, and a very rare Lagavulin.

Other additions include a Brora 1980, distilled during the golden age of peated Brora, taken from the very last of the distillery’s casks from that year. An extraordinary maturation from The Singleton also joins this year’s Prima & Ultima.

Having been personally involved in its creation in her role as Master of Malts for The Singleton, Robinson has selected The Singleton of Glendullan 1992, part of a one-off trial that saw spirit first kept in refill wood, before double-maturing in two small ex-Madeira barriques for further fourteen years. This has imparted a sweet richness to the malt that complements the light and elegant distillery character.

Another whisky personal to Robinson is the Linkwood 1981, part of the first pioneering trial exploring different maturation processes at the distillery. The rich flavours and aromas of a PX/Oloroso-seasoned cask are deeply integrated with the creamy texture and spicy, toasted characters brought by the new American Oak.

Each full set of eight Prima & Ultima single vintage malts is accompanied by eight unique glasses. They are each engraved with a bespoke design that reflects the story behind each cask, created in collaboration with two glass artists. Individual 20ml samples of each whisky are also included with a booklet of personal stories told by Robinson.

Only 376 full sets of the Prima & Ultima Second Release are available for purchase, directly through the Diageo Rare and Exceptional Singapore Private Client Team, at a recommended retail selling price of SGD 39,500 in Singapore. An online registration page is now open for whisky collectors in Singapore to register their interest.

Once registration ends on the 23 August 2021, there will be an opportunity to own the elusive set labelled #1 of the second release of Prima & Ultima, each signed personally by Maureen Robinson when it goes under the hammer in an online auction at Sotheby’s from 15th – 24th September 2021 in Hong Kong.

All proceeds of the sale going to leading humanitarian charity, CARE International. Funds from the auction will support CARE International UK’s work to empower women and their communities around the world through encouraging entrepreneurship, building livelihoods, improving access to education and healthcare, and responding to the COVID-19 pandemic.

(This article first appeared on Augustman.)

Scotch Whisky Diageo Single Malt Scotch Whiskey Diageo Rare and Exceptional
Lifestyle Asia
Here's where you can read the latest news and stories from Lifestyle Asia and our sister titles PrestigeOnline and Augustman, curated from all of our editions in Hong Kong, Singapore, Kuala Lumpur, Bangkok and India.
Luxury