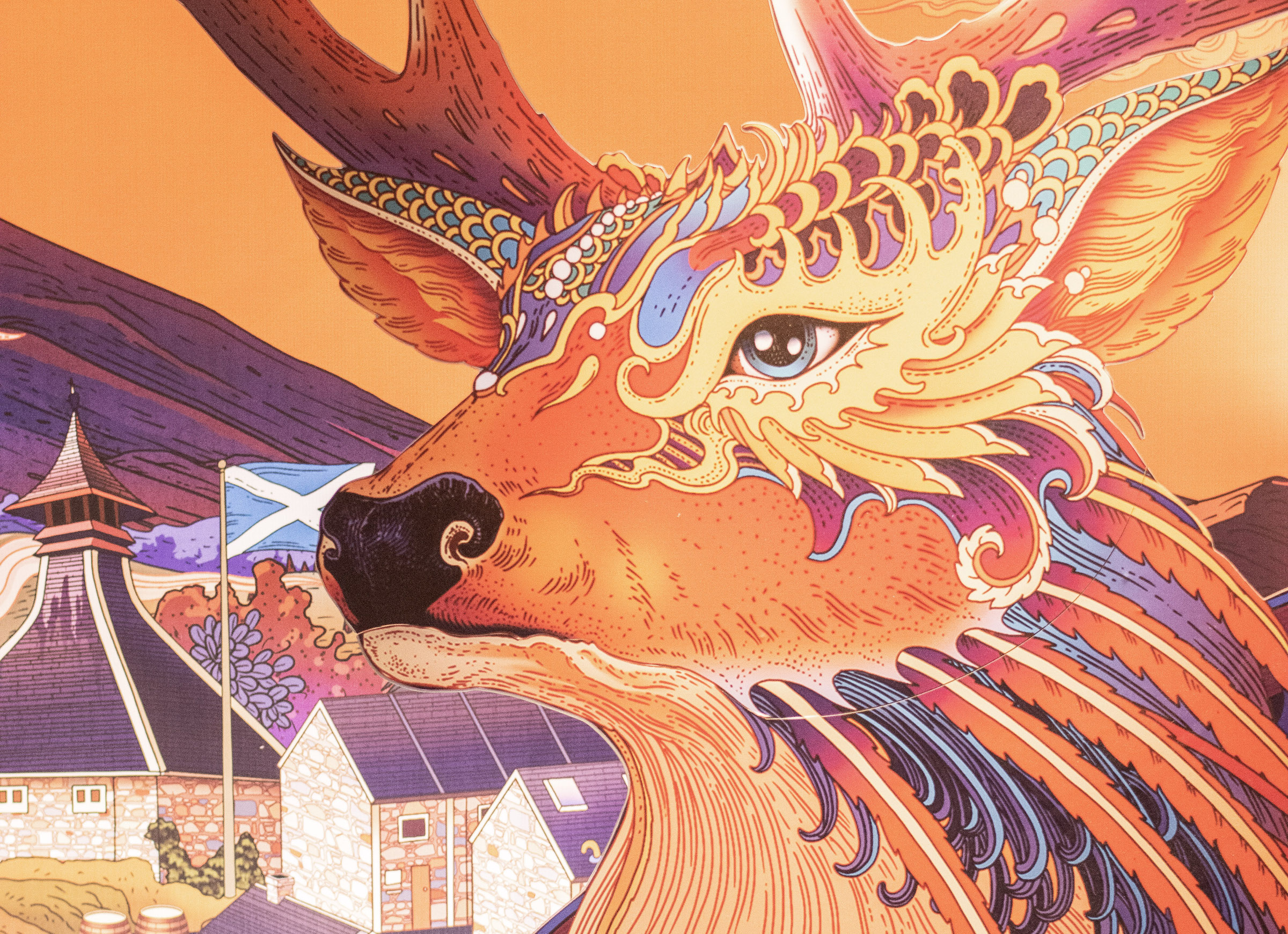 Ushering a new cycle in the Chinese Lunar Calendar, Glenfiddich collaborates with Shenzhen-based artist Rlon Wang to create limited-edition festive packs for its core range of single malts exclusively for the upcoming festive season. These colourful illustrations can be seen across the 12 Year Old, 15 Year Old and 18 Year Old editions, exploring the mystique of Glenfiddich’s royal stag icon and chronicling the epic journey its founders made over a century ago.

Glenfiddich, which translates Valley of the Deer in Gaelic, takes on the royal stag as its iconic symbol of majesty and prominence in the single malt scotch whisky industry. Wang captures the spirit of the animal with a richly detailed illustration that accentuates the 12-pointed antlers that denotes its ‘royal’ classification, while the flowing ribbon and medal around its neck symbolise Glenfiddich’s status as the world’s most-awarded single malt.

The river surrounding the royal stag depicts the Glenfiddich distillery, identified by its granite buildings and resplendent copper still. A closer look reveals an intrepid figure rowing a cargo of whisky casks downstream. The wild Scottish landscape blends with hallmarks of ancient and modern Asia in a mythical evocation of the long-standing connection between east and west.

And Wang tells the story beautifully through his distinctly contemporary style, playing with colourful multi-layered illustrations inspired by personal memories of family reunions during Chinese New Year. The traditional Chinese artist also captures the symbolic meaning of deers in Chinese fables as a representation of longevity and good fortune in his depiction.

The vibrant design also pays tribute to the eastern voyage made by Charles Gordon, son-in-law of Glenfiddich founder William Grant, in 1909. Gordon famously left Speyside with little more than a few cases of whisky and a dream to bring the label to the world. He returned a year later, having won the hearts of whisky aficionados across Asia with the exquisite whiskies of the William Grant & Sons family.

Known as a symbol of affection and respect, Glenfiddich is a whisky that channels the spirit of the stag to honour generations past, while looking towards a future full of promise. We’d say that it is a great story to be told and a perfect gift for family and loved ones this Chinese New Year — to cheer for an auspicious new year or as a collectable to your whisky collection.

Glenfiddich single malt scotch whisky
Martin Teo
Content Editor
Martin loves traveling the world to see ancient ruins and classical architecture. He enjoys the culinary experience of various cities but (still) refuses to eat anything insect-like. On a daily basis, he finds time hitting the gym to compensate for the amount of food he needs to eat just to write an article.
Dining Living Culture Travel Style Home