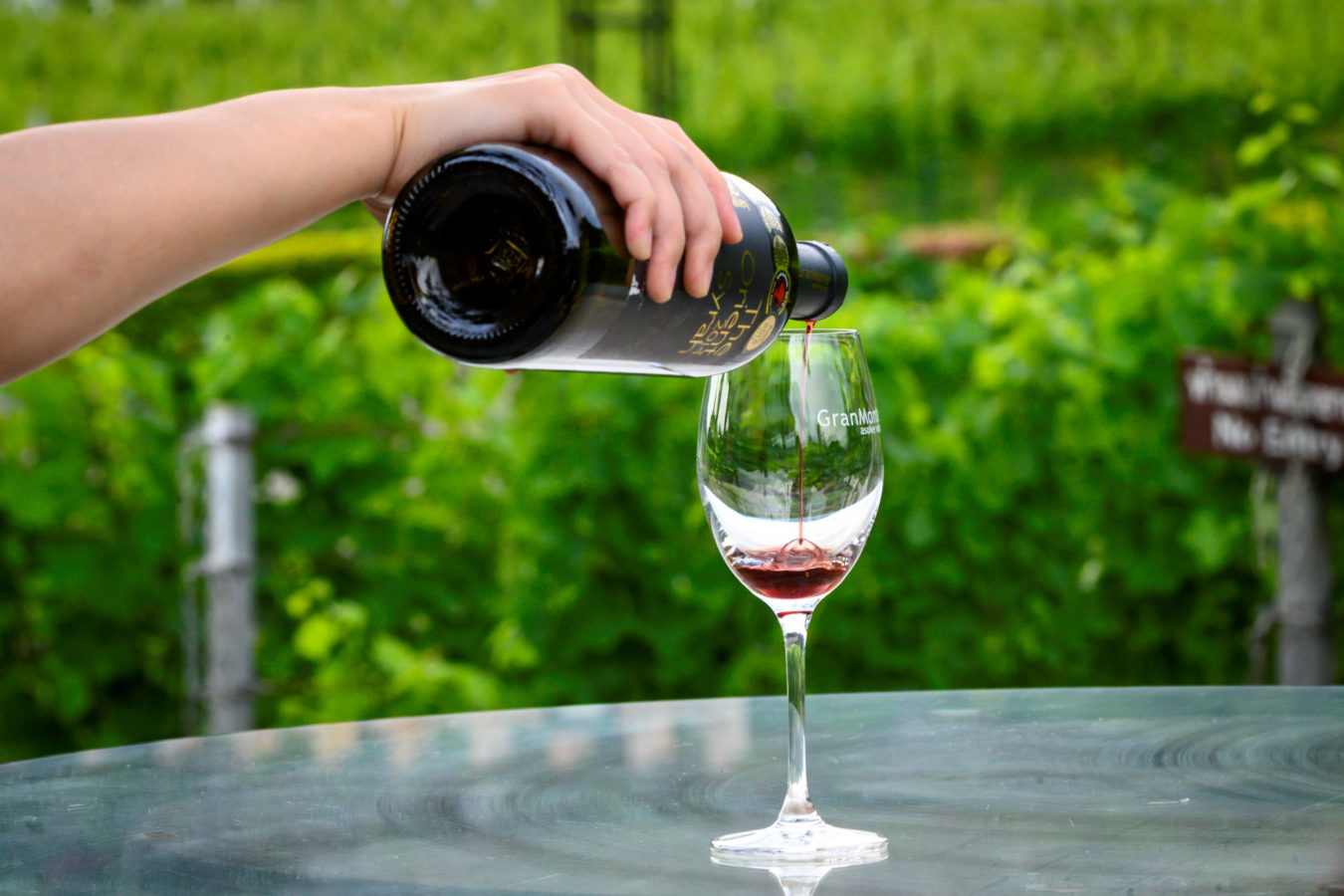 Sisters Mimi and Nikki have battled Thailand’s tropical climate, chased off elephants from their vineyards and won over a sceptical public to their award-winning wine.

Rows of Syrah, Viognier and Chenin Blanc grapes stretch across the 40-acre GranMonte Estate in the foothills of Khao Yai National Park.

The elevated terrain, three hours outside of Bangkok, provides unexpectedly fertile ground for grapes and an escape from city life, complete with a rust-coloured guesthouse that could be pulled straight from a Tuscany tourism advert.

As they snap selfies in between the vines visitors run into Nikki Lohitnavy, 33, who studied oenology in Australia and now steers the science behind each bottle.

She painstakingly experiments with grape varieties to see how they respond to the climate — it takes at least six years to see if a decent wine will emerge from the ground.

The plot of land was once a cornfield, but their father Visooth transformed the terrain into trellised vines and as a teenager Nikki joined him in the fields.

Younger sister Mimi was not interested in the viticulture, but today, she heads the label’s marketing, calling it her “mission to put Thai wine into the market”.

But after more than two decades in business, GranMonte is gaining recognition especially for its progress in tropical viticulture.

“Winemakers around the world want to know what we do here because the climate is changing so they have to adapt to warmer temperatures and higher rainfall in their regions too,” said Nikki.

Its proximity to a national park also poses an unusual pest control issue as hungry elephants occasionally trespass through their vineyard, prompting calls from the sisters to rangers for help.

Despite the gains, the long term future of the GranMonte wines is clouded by the kingdom’s heavily restrictive booze laws.

Thailand has a strange relationship with alcohol. A devoutly Buddhist kingdom, it also has the highest alcohol consumption rate in Southeast Asia, according to the WHO. A web of rules, including high import taxes on alcohol, hefty fines for breaches and a licensing culture where bars require friends at local police stations, can make drinking a complicated business.

You might also like…
Food & Drink
The best food and champagne pairing according to science is the humble radish
Food & Drink
How did Japanese gins become a household spirit overnight?

Then there’s the 2008 Alcoholic Beverage Control Act, a law forbidding the display of booze logos on their products, as well as any advertising that could “directly or indirectly appeal to people to drink”.

It’s aimed at controlling consumption, but in effect clips the wings of small producers who do not possess the same reach to customers as established brands.

“I can’t show clearly a bottle of my wine, I can’t post on social media what the wine tastes like, or how or why it’s good,” says Mimi, who worries that their website might fall afoul of the law.

Critics say it has always been unevenly enforced, allowing booze giants to cement their brand recognition, spraying their logos via non-alcoholic drinks like soda water on giant billboards and public transport.

The market leader – Thai Beverage – makes the ubiquitous Chang lager. The firm is owned by Sirivadhanabhakdi family, the kingdom’s third richest family with $10.5 billion in wealth according to Forbes, and their portfolio includes massive downtown Bangkok real estate projects and hotels.

Together with Boon Rawd Brewery — which produces Singha and Leo — the duopoly are unrivalled in reach and capital.

Thailand’s booze laws are uncharacteristically responsive to changes in drinking culture. Online alcohol sales – which surged during the pandemic lockdown – are now in the regulators’ crosshairs, potentially closing down another revenue route for small alcohol producers.

GranMonte lost 30 million baht (US$964,000) in three months during the shutdown – and Mimi says their recovery will be further hampered by new rules slated to ban all online booze sales.

But Nipon Chinanonwait, director of the Ministry of Health’s Alcohol Control Board, rejects criticism that established giants are given an unfair advantage.

“Both big and small companies face the same procedure,” he said, while the ministry insists the laws are there only to prevent underage drinking.

The sisters have teamed up with dozens of small-scale craft brewers, importers and bars to petition the government to axe the advertising law, and to halt the impending online booze sales ban.

“People cannot live like this,” said brewer Supapong Pruenglampoo, who hid his Sandport Brewing Facebook page from public view in fear of a crackdown.

“In these COVID times, (the fines) are impossible to pay,” he said.

But in an unequal kingdom, any efforts to change the monopoly culture are bruising. It’s “a reflection of how Thailand operates,” says Mimi.

“The lawmaking, the enforcement and everything surrounding it is to benefit the small group of people holding most of the wealth in Thailand,” she said.

As Nikki tastes their recent batch of Syrah grapes kept in imported barrels, she says the challenges to start were numerous. Now, they are working to stay on top.