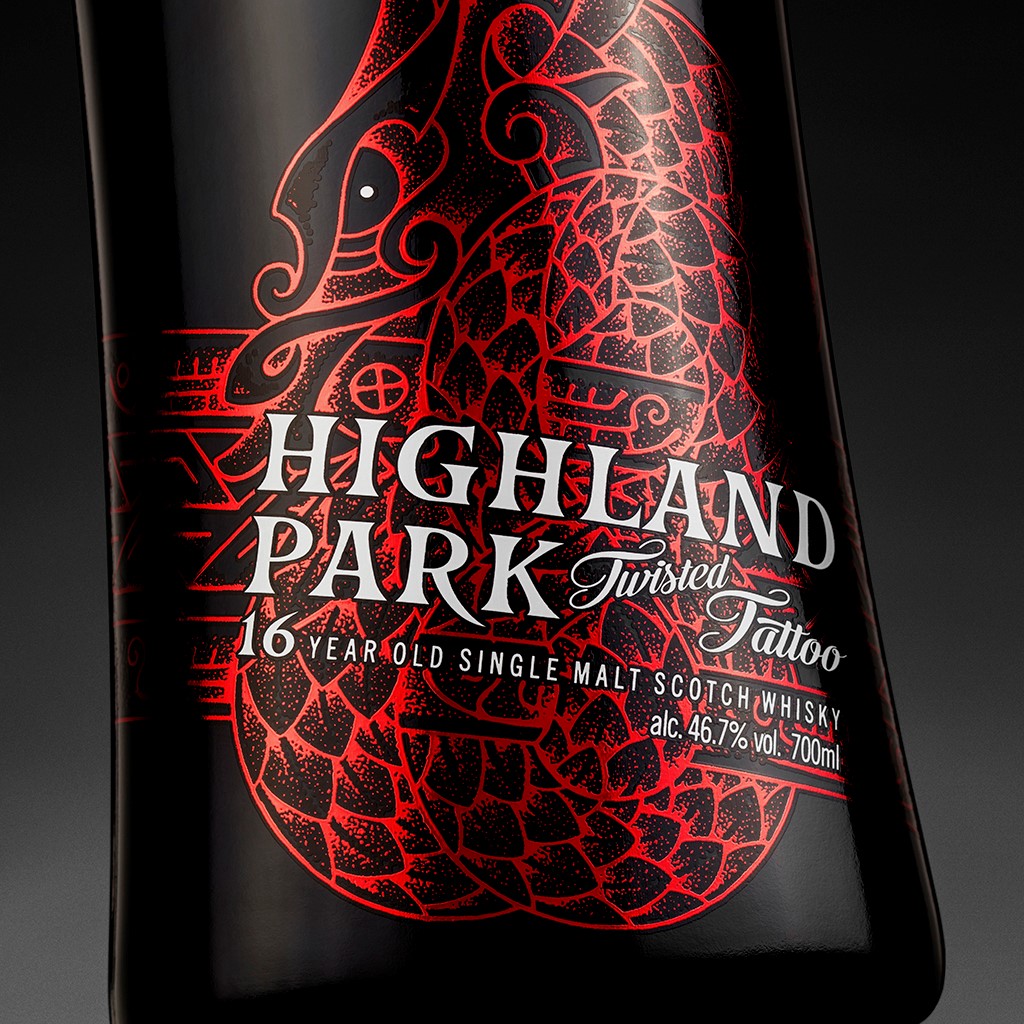 Highland Park’s new Twisted Tattoo is a layered vision turned into whisky. The Orkney-based distillers have long been finding ways to render their Viking heritage into single malt Scotches, drawing from the rich wells of Nordic mythology to inspire both the flavour and design of its expressions, and the Twisted Tattoo stays true to that blueprint, albeit with an intriguing twist.

Before grappling with taste, we have to address the name and look of the Twisted Tattoo. According to legend, Vikings were fearsomely tattooed to mark themselves as tribal warriors. Highland Park takes that nugget of historical reality to Danish tattoo artist Colin Dale, who drew the intricate red Midgard serpent that now adorns the bottle. Even if you’re not too familiar with Nordic lore, one has to admit that the flowing knots of blood red lines on a glossy black backdrop make for one seriously bad*ss bottle.

The 16-year-old whisky within, however, is a stark contrast to the intimidating art the Twisted Tattoo fronts. The straw-coloured spirit belies the fact this is Highland Park’s pioneering single malt aged in Rioja-seasoned oak casks and first-fill bourbon casks. Whisky aged in 153 casks of the former, and 70 of the latter create the blend’s subtle character.

On the nose, touches of warm, sweet autumn spice and peat give way to a floral, light mouthful on the tongue. Hints of red summer berries recall the use of the Rioja-seasoned oak, while a pronounced measure of vanilla is a sweet reminder of the bourbon barrels. Giving the single malt an earthy depth is the whisper of peat smoke, a Highland Park signature that’s present in a dose smaller than its other, punchier offerings.

Twisted Tattoo is a single malt that experiments with contrasts and strikes an unexpected balance. Rich yet soft, striking yet mellow, it’s definitely one to add to your top shelf.

Drinks Whisky Scotch Highland Park
Beatrice Bowers
Features Editor
Beatrice Bowers writes about beauty, drinks, and other nice things. When not bound to her keyboard, she moonlights as a Niffler for novels and can be found en route to bankruptcy at your nearest bookstore. Don't tell her boss.
Drinks Beauty