Sustainability is a buzzword that’s been bandied about in the restaurant world for a while now. And yet when it comes to bars, the conversation tapers into barely a whimper. After all, restaurants – especially fine dining ones – are notorious for using only the best parts of produce and discarding the rest.

But a blowback has taken place, at least amongst chefs who care. Unused produce, for instance, is turned into staff meals, while off cuts like bones and shells are used to make stock.

How will a similar approach apply to bars, and can the idea of a sustainable bar gel with the hip and sexy image of today’s trendy nightspots?

For Luke Whearty – the name behind Ann Siang Hill bar Operation Dagger, it’s a resounding yes. The barman hails from Melbourne, where he says the idea of sustainability is far more ingrained than it is in Singapore.

“When I came here a few years ago, I was surprised that no one was doing it there,” he says. “Singapore has some way to go, but it has to start somewhere.”

The bar is in a unique position to spread its ethos. It’s ranked 24th on the World’s Best Bars list for 2017 — a spot that puts it on the global radar. We chat with Luke on how Singapore’s bars can go down this route, whether “sustainability” is a concept that can ever be sexy, and most importantly, why anyone should care at all. Are the bars in Melbourne consciously practicing sustainability compared to Singapore?

A lot do and a lot don’t, much like anywhere else in the world. But it’s a ‘thing’ and in this day and age, people are a lot more conscious of it. A lot of people use it as a bit of a marketing tool – “look at us, look at how sustainable we are on Instagram”. But my opinion is, we should all be making an effort to be sustainable anyway, and not letting it be a special thing. So I’d like to see it just become the norm. If I can have an influence on the bar culture in Singapore for it to become the norm, then that’s great.

Why does being sustainable mean so much to you?

The older I get, the more I realise that I might want to start a family one day, and we’ve all got to do our part now rather than in 50 years time. We can’t turn around to our children and go, “Sorry we screwed it up.” Even if you can make a small change to what you do, it makes a big difference.

How can a bar be sustainable?

Well, since we opened the bar four years ago, we’ve never used plastic straws. I did the calculation: That’s over 300,000 plastic straws we didn’t use. That’s the big one – can you imagine if every bar in Singapore did that? It would make a huge difference. We also made all the labels on our bottles ourselves. We keep dockets and receipts and recycle them into our own paper for the labels. We recycle all our glass bottles too.

Yet the impact a bar makes on the environment is small.

It might be small for one bar, but if you can influence other bars, then it’s truly something. One idea I had in mind was to work on a programme where we can rally this area to recycle more. Can we come together to reduce the cost of it? If someone comes and says, ‘Nope we’re not going to recycle’, that’s their choice.

What about food and drink offerings?

We think about food miles. For instance, we try to cut down the use of citrus in our drinks – we use a lot of vinegars to get that acidity. For a lot of our wines, if we don’t use them, we turn them into vinegar so they don’t go to waste. A lot of times when people use vinegar, they get it from the store, which can be quite harsh. We use a house-made vinegar, which we cook a little bit to take off the edge and harsh notes.

So why is citrus not sustainable?

Do you see any citrus orchards in Singapore? If it can’t be grown here or near here, then it’s not sustainable. We have to import it from California and Australia and between that, there’s packaging and food miles. That’s why it’s cool to have guys like Edible Gardens in Singapore. One of the first drinks I made in Singapore five years ago was a gin and tonic with calamansi lime. I was wondering why, in Singapore, you go to a bar and you’ll see a gin and tonic made with Tahitian limes, when calamansi for me as an outsider was so amazing. It’s sweet and fragrant, so we decided to make a calamansi drink. I’d love to see more people do stuff like that. 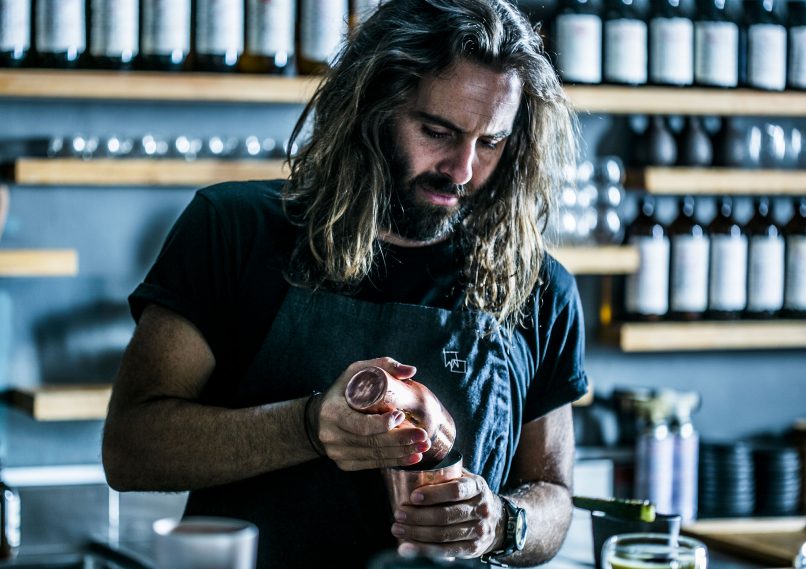 So how do you get around that, when someone comes in to ask for a whisky sour? You still need lemons right?

We still have lemons at the moment, but we would have to one day get rid of them. When we do use them, we use the whole part of the lemon. So instead of juicing it, we make a limoncello from the lemon husk — which most bars throw away. We consolidate those, seal it in a bag with vodka, sugar and spices, and make it. There’s tons of flavour still in there that otherwise gets thrown out.

How are the bartenders in Singapore reacting?

It’s such a new concept at the moment, so people don’t understand what it’s all about yet. A lot of people don’t see the negative effects of not being sustainable. But there’s definitely a lot of younger bartenders who are really passionate, and now they believe in this sort of stuff. One ex staff member of mine who runs Native, is very much into sustainability. It’s cool for me to have that sort of influence on young local guys.

Do customers care whether it’s sustainable?

A lot of the time they don’t even realise it, and I try not to get on my soapbox and talk about it. For me, I do it for my own reasons. I’m not going to force other people to do it – it’s like a religious person knocking on your door. I don’t want to do that to anyone. But a lot of times, ignorance is bliss. It’s one of those things where if you reach one in a hundred people and inspire them, that’s great. For me, it’s about knowing that we’ve got ethical practices.

But sustainability isn’t sexy. And as a bar, you’re supposed to be sexy. How do you make this idea cool?

[Laughs] Well I think if you make something taste good, that’s a start. I think it’s cool – maybe that’s just the nerd in me. But I think actually what is ugly to me is someone that doesn’t give a s**t about the environment. It says a lot about a person. I’d probably disagree, I do think it’s sexy.