Review: Club 5 brings back the heyday of Beach Road with its cleverly concocted cocktails

Food & Drink
Review: Club 5 brings back the heyday of Beach Road with its cleverly concocted cocktails
Share this article
Next article

Thirty five years ago, a dance club — simply called Club 5 for being a riot after 5pm — became one of Singapore’s most celebrated spots for anyone seeking a jivin’ good time.

The establishment at the Parkroyal on Beach Road was a mecca for the booming ballroom dancing circuit of the ‘80s and ‘90s, with ballroom dancing nights that drew crowds to its famous wooden dance floor deep within.

After an extensive makeover and rebrand, the iconic establishment still can’t seem to shake off its propensity for putting smiles on peoples’ faces, and even if you weren’t privy to the dance culture of the yesteryear, you’ll surely enjoy everything this newly reopened bar has to offer.

Like the rest of the hotel’s total refresh, Club 5 manages a delicate balance between nostalgia and modernity. It is, after all, located in the vicinity of one of Singapore’s most vibrant and thriving historical spaces — think Haji Lane and Kampong Glam — so this evolution was only a natural one. Award-winning, Singapore-based designer Emma Maxwell was evidently the right person for the job because you’re immediately transported into another world the minute the heavy, brass-finished glass doors swing open.

This blast from the past takes its shape by way of Art Deco flourishes throughout. The glamour and drama from the roaring Twenties are highlighted via details such as the brass inlays on the marble floors, the smoked mirrors, and the arching brass centrepiece that houses over 150 bottles of classic and homemade creations behind the bar. Overhead, oval tungsten lamps line the ceiling dramatically while casting a warm, romantic glow, making it one of the bar’s most striking features. 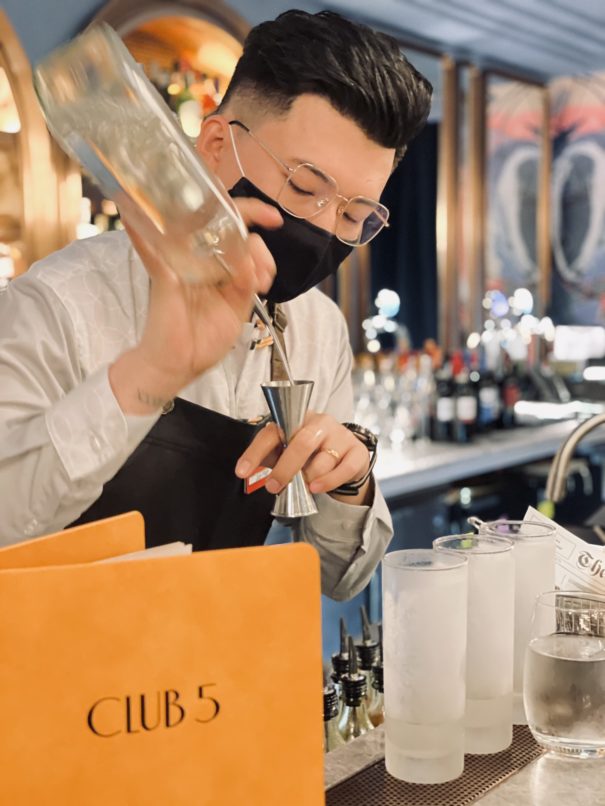 If your first impressions were that this was going to be yet another cocktail bar whose only merit was looking good, you’re not alone. Beyond the swanky interiors though, was a cocktail menu that was not only stellar, but also an incredible homage to the historic district that it’s been set upon.

Helmed by Head Bartender Ong Jun Han — formerly from Ah Sam Cold Drink Stall — the menu is divided into culturally-rich zones like Kampong Glam, Bugis, Beach Road, and Arab Street. These locations end up inspiring the ingredients and presentation of his creations, so expect a taste of history during your time there. 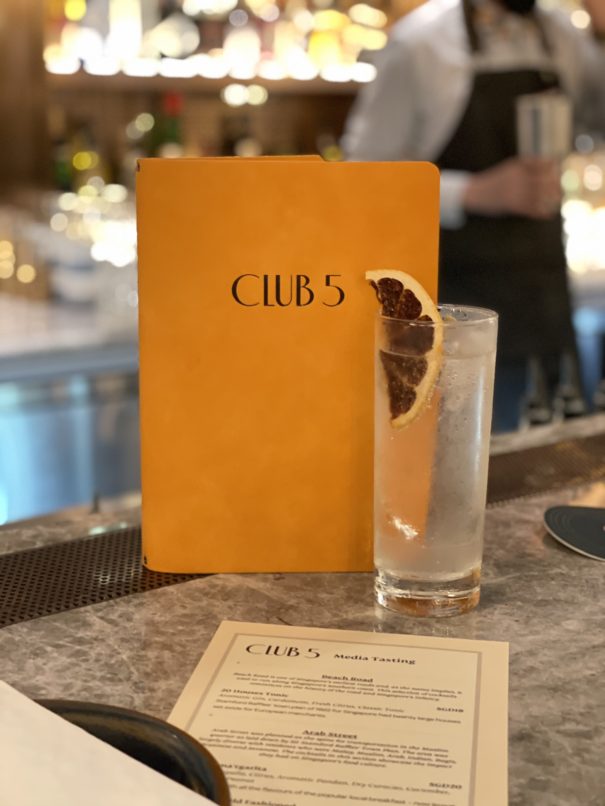 The 20 Houses Tonic is a wonderful way to kickstart the evening. Jun Han’s take on the G&T here is elevated with a touch of cardamom and fresh citrus, and tells the tale of Stamford Raffles’ 1822 town plan, in which he wanted 20 large houses set aside for visiting European merchants. 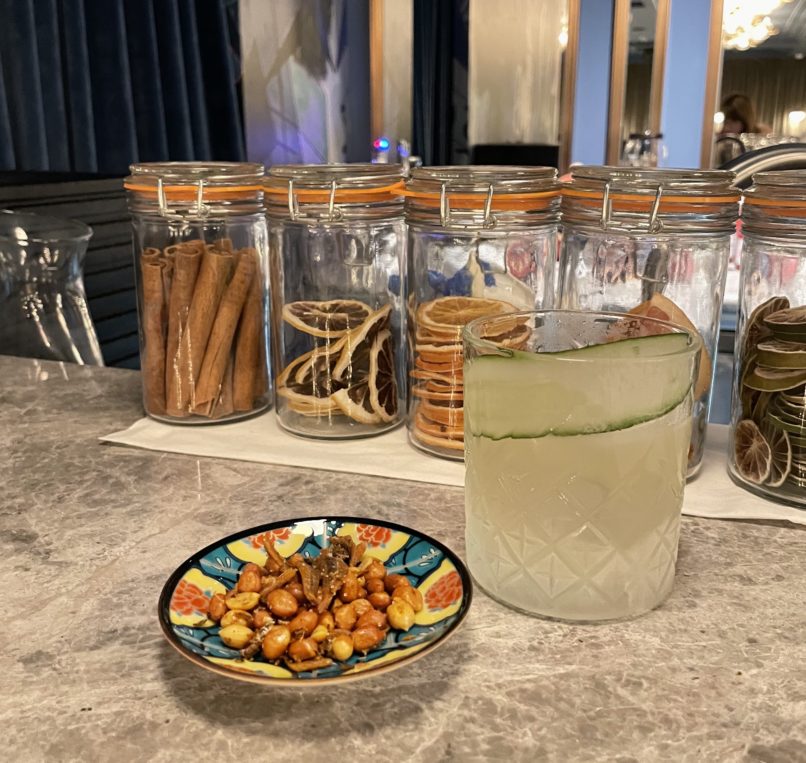 Then there’s the Nasi Lema’rgarita, and this is when he starts to get adventurous. I’m not usually one to find solace in a cocktail for a few good reasons, the biggest being they’re almost always too sweet. As a cheeky twist on the classic Margarita, the Nasi Lema’rgarita was well-balanced and to my surprise, neither cloying nor confusing. Instead of being heavy with coconut milk, it was deliciously light with coconut-infused tequila. There’s a subtle sweetness and spiciness from the chilli-infused pandan syrup and is served garnished with cucumber (of course), and with a side of ikan bills and peanuts. Like the Nasi Lema’rgarita, the Merchant’s Old Fashioned is another from the Arab Street section and recalls the spices that used to be heavily traded in open-air markets here. Here, Jun Han infused rum with gula melaka and aromatic spices like nutmeg and clove, before adding dry curaçao, aromatic bitters, burnt orange and vanilla to create a complex drink even ardent Old Fashioned lovers would appreciate. The drink is served in a Turkish tea cup and atop a Turkish-inspired tile to reference its obvious flavour influences.

Equally enamouring is Boogie Street, named after the famous party central that was Bugis back in the day. The cocktail is a complex take on the gin sour, with smoky mezcal notes and a sweetness from the apricot brandy that’s meant to portray both the English army and navy servicemen, and the female dancers who attended the parties respectively. The theatrical drink is served in an equally loud fashion — we’re talking iridescent sequinned coasters here.

Those on designated driving duties or simply want to cut down on alcohol will appreciate the mocktails on offer, only because just as much thought has been put into them as the alcoholic beverages. When in doubt, go for Calm Waters, a refreshing zero-proof take on the Dark ’n’ Stormy with tropical spicy notes. Bar grub is decent here and we’re not talking fries and fried chicken wings. The Homemade Wagyu Satay sees tender chunks of the prized beef that are well-marinated, grilled and served with a hazelnut sauce instead of the usual peanut version. The Crispy Lamb Ribs and Deep Fried Soft Shell Crabs with Chilli Crab Sauce were also favourites for being incredibly moreish, and for pairing well with the drinks.

Club 5 has no lack of competition in the vicinity, and we’re talking the likes of Atlas Bar and the Writer’s Bar in Raffles Hotel. There is, however, plenty that’ll keep it well within the leagues of these legendary names, and we dare say more so when dancing is finally allowed in public spaces again.