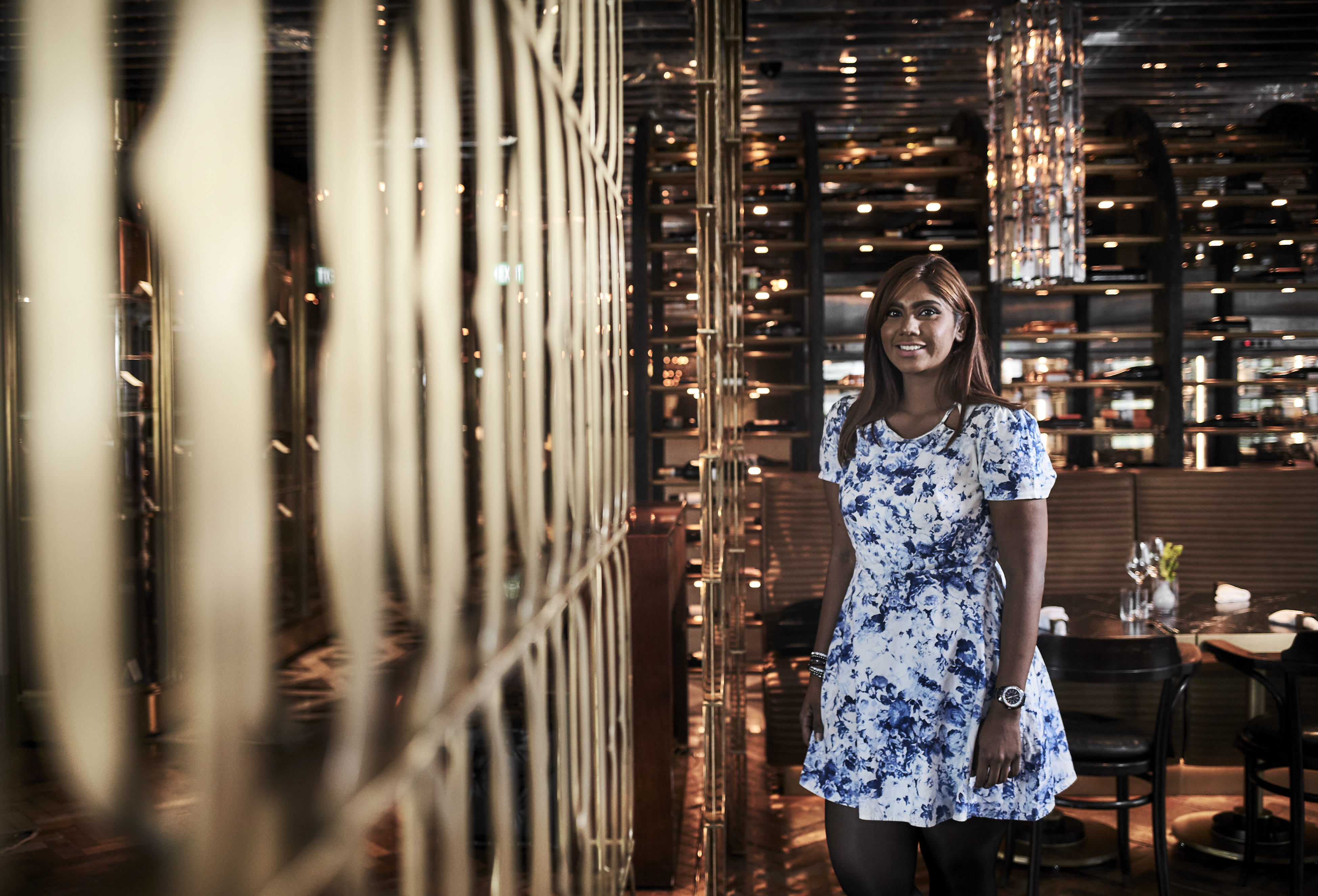 Sommeliers, much like every other profession in the world, comes with its share of stereotypes. A black-and-white suit, slicked-back hair, quartered napkin on the forearm and a ramrod straight, uncompromising spine are just some quickfire associations that a guest will conjure when calling for a sommelier at a fine dining restaurant or wine bar.

Most customers expect detachment and a stiff upper lip, and if you’re one that subscribes to this breed, the last person you’d expect to arrive at your table when beckoning a somm is Shamini Krishnan.

Krishnan, the sommelier at members-only club 1880, is the dictionary definition of a person that exudes energy from their pores. That effervescence could mislead one to think she’s a lot younger than her 28 years, especially when combined with her uniform of bold winged eyeliner and an army of snappy catchphrases about how “kicka**” wine can be.

With a resumé that includes Cut by Wolfgang Puck, Esquina, and Bacchanalia, she has been mentored by many heavyweights in our local food and beverage industry. Her having a Level 4 diploma in wines and spirits from the Wine and Spirits Education Trust (WSET) is the sweet cherry that backs up her credibility.

Krishnan’s magnetic demeanour stands to confuse many traditionalists who expect pomp from someone of her calibre, easily dismissing her as just a “young sommelier”, as if youth is a dirty word. Nothing about her style tallies age with inexperience — she is but one of the many new generation sommeliers trying to break from the past and redefine what it means to be passionate about and work with wines. We sat down with her in 1880 to talk about her career, and why young sommeliers shouldn’t be disregarded.

How did you go from working as a bank teller to becoming a sommelier?

I was sitting down one day, counting money, and I realised how every day was just the same. There was one colleague I had who was in her fifties, and she had been doing this for 30-over years. I could not be stuck in that role forever, because I’m not someone who can stick to a routine and cease learning.

So, I quit my job. One day, I saw this bustling scene in a restaurant that just captivated me. Soon after, Marina Bay Sands was hiring for a restaurant. I applied, and during my quick interview, I was asked what I knew about F&B. “Nothing,” was my reply, and I was hired. It just went from there.

What is your personal style as a sommelier?

I don’t believe in telling the guests what I think. I always try to become their friend first, because I don’t believe in the stereotype that the sommelier is always correct. Instead, I choose to be easy-going and approachable, so I don’t intimidate.

It’s so stiff to be locked in a suit and tie the way some fine dining restaurants force you to. From the way I dress to my approach to wines, I try to be a cool, edgy sommelier to set myself apart and stand out from the mould.

Do you think your need to be edgy and different comes with the fact that you're younger?

I think it’s just me. Often, I ask myself how I want to be remembered when I die, and it’s to be this crazy-cool sommelier. My work is driven by a need to break barriers in the wine world, and do justice to those dining, as well as the small farmers making these wines and tending the vineyards that don’t get talked about a lot. It goes beyond age, it’s my personality.

So you don't think being a younger sommelier gives you a unique perspective to your profession?

I don’t think calling me a young sommelier is relevant. Half the time, people on the floor tell me I’m too young, but I just laugh it off. Most of the time, it’s just a challenge for me to prove my skills, and they do respect me after they see what I can bring to the table.

Do customers ever give you a hard time?

Yes. There was once this customer who didn’t want me on his table, and I didn’t know why because I’m typically well-loved amongst the members at 1880. One night, we were very busy, and this man brought three bottles over and put them on the table. I told him I would decant his wines, and he demanded they be decanted side by side. He said, “I hope you know what you’re doing yeah?”

I shrugged it off and brought his wines to the back of his table to set up my station, and he called my manager over straight away. He questioned if I was really a sommelier, and when my manager tried to justify that I was simply following protocol, the guest cut him off. “I don’t think she’s good enough for my table. I think you should do the decanting.” He even told my manager that I should go back and watch YouTube videos to get educated.

A lot of time was spent on my part wondering what I did wrong, but after a while, I realised he just wanted an older person, someone who wore a suit, not a dress, and Caucasian to serve him. He just didn’t want me there as a girl, that’s all.

It's appalling to be judged that way.

I never saw him after that. Maybe I stood out too much, and he just wanted someone that fit the model of a sommelier. Sure, people should dress a certain way, but the idea of a sommelier having to wear a suit, and for their workplace to only be a place with white tablecloths and butter knives — it’s outdated. You don’t need that pretension.

I always bring myself to the table first, with my character, and everything else follows.

You clearly are all for breaking barriers, but don't you think tradition has a place in being a sommelier at all?

I do keep some traditions in place where I have to, I don’t just go about trying to kill them all off. Still, to me, they’re guides on how to do my job. What I’m really here for is to make the customer happy because that is what wine is supposed to do. All the pomp should be scraped off.

Where do you want your journey as a sommelier to take you?

By 35, I want to run my own bar that has a really unconventional take on wines. I want people to step into my bar and have people be clueless about what they’re drinking because they’re sipping from dark glasses. You’ll be completely unaware about the wine within until the server reveals what that is.

My goal is to help people be as open-minded as possible. Their taste buds should do the talking, not their brains. People use their heads so much when drinking wines that they stop tasting. It skews your perception and causes interruption, and the wine becomes something it’s not.

Interview Sommelier 1880 shamini krishnan
Beatrice Bowers
Features Editor
Beatrice Bowers writes about beauty, drinks, and other nice things. When not bound to her keyboard, she moonlights as a Niffler for novels and can be found en route to bankruptcy at your nearest bookstore. Don't tell her boss.
Drinks Beauty