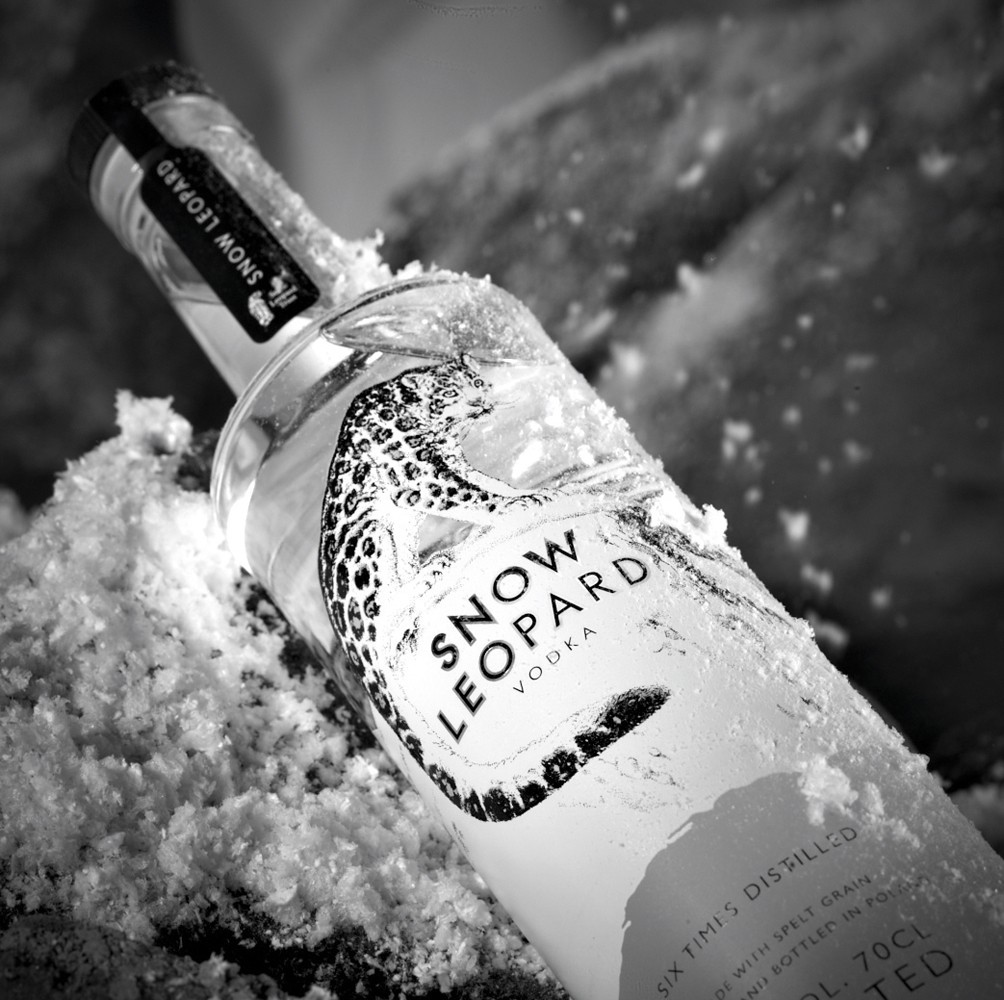 Q&A: Stephen Sparrow shares how wanting to save snow leopards led to starting a vodka label

Food & Drink
Q&A: Stephen Sparrow shares how wanting to save snow leopards led to starting a vodka label
Share this article
Next article

As a post-graduate, Stephen Sparrow’s knowledge of spirits extended little beyond his duties as an executive at Allied Domecq, a Bristol-based company focusing on alcohol and restaurant service. Working in a large corporation wasn’t something he ever foresaw doing for the long-term. His passion was always for wildlife and its conservation — something fostered during his university and law school holidays working as a safari guide in East Africa.

After Sparrow was let go by Allied Domecq during an internal division, he decided to hold off applying for another white collar job, and went travelling instead. His first stop was Argentina, where equestrianism, polo playing and learning the tango dotted his days. The Himalayas formed his next dream destination, and it was there that Sparrow’s imagination was captured by the snow leopard.

The majestic white leopards are an endangered species, currently estimated to number somewhere between 3,500 to 7,000 worldwide. Sparrow wanted to do something to help the felines, and so established the Snow Leopard Trust in the UK. While the fund is currently the largest and oldest organisation dedicated solely to snow leopard conservation, Sparrow started out not having much money to do anything to save the species. So, Snow Leopard Vodka came into fruition.

It wasn’t an immediate connection between starting point A, and end point B for Sparrow. Though Snow Leopard is one of the world’s most premium spelt grain vodkas at the time of writing, the 11 years it took to get this accolade was a transformative journey for the founder. Currently, with the 15 percent of the proceeds from Snow Leopard Vodka going towards the Trust, Sparrow has, and will continue to make a vast difference towards the education and conservation efforts for the Alpine beast.

Sparrow was recently in Singapore to promote Snow Leopard Vodka. We met him for a chat, where he shared more about the genesis of Snow Leopard, and why vodka isn’t just a mixer for parties.

Lifestyle Asia (LSA): How did the merger between your passion for wildlife conservation and vodka occur?

Stephen Sparrow (SS): When I started the Snow Leopard Trust, I began wondering what the best way to raise money was. I knew I either had to go back to the corporate world, or do something on my own. It occurred to me that if I trademarked the name Snow Leopard, I could create a vodka branded with the name, then use the proceeds from sales to go to my conservation efforts. This way, I involved my passion for wildlife into what I was doing, and I had my own business. I mean, I had to live off something.

LSA: Was it always going to be a vodka label?

SS: I am a big believer in the fact that if you’re going to go do business, do something that you know about. Whilst I wasn’t an expert in vodka production, my experience as an executive at Allied Domecq made me familiar with the numbers that come with it. Business is all about the numbers. From that perspective, you don’t need a large amount of capital to get started making vodka. You don’t have to buy the distillery, build it, or sit on stock for 12 years. You can make it today and sell it tomorrow. That was attractive. It’s also a spirit category where brand loyalty isn’t as pervasive as that of scotch whisky. Everything came together to make a good proposition.

LSA: What was your first experience with vodka?

SS: Probably like everyone else — getting drunk when I was a teen.

LSA: Were you already an expert on the spirit before starting Snow Leopard?

SS: I’ll be brutally honest. I wasn’t a vodka aficionado.  I didn’t come into this as someone who wanted to make vodka right off the bat. I was just a guy who wanted to do something for snow leopard conservation, and use my knowledge to my advantage. Learning about vodka came after the business plan was formulated.

My knowledge of vodka before this was just like anyone’s — having shots of rubbish vodka as a student. Eleven years on, though, I am fairly knowledgeable. My belief is that you shouldn’t let recreational vanity get in the way of creating a top-notch product. I circumvent that by outsourcing to the experts.

LSA: How did you find the distillery to craft Snow Leopard?

SS: I used my old contacts at Allied Domecq to find some good, independent distilleries to take a look at. Poland was ideal, because the Polish have been making vodka longer than anybody else. Vodka is to the Polish the way Italian leather handbags are to women — there’s a luxury provenance to it.

LSA: Why is your vodka made from spelt grain, and not potato or cereal?

SS: After finding a distillery, I knew we had to have something different about our vodka. I just wasn’t sure what it would be. The eventual lightbulb came about by chance. I was at Portobello Market, and I got introduced to spelt grain through a girlfriend coming to lunch with a loaf of spelt bread. It was delicious. She told me it was an ancient grain, it’s got a thick husk that keeps out pollutants, you don’t need pesticides, and it’s incredibly nutritious. Vodka can only be as good as your raw materials, and the skill of the person making it. I thought, ‘What if this is the best grain?’

LSA: How did the craftsmen approach creating vodka out of spelt grain, since it isn’t the most common base?

SS: I asked the distillery if they could do it. This was something they had been looking to do as well, so they were pretty excited to have a crack at it. When I got the samples, I got one of the best vodka tasters in all of UK and Europe to do a blind tasting with Snow Leopard vodka against 11 others. It came out tops. I thought, “Ah-ha!”

LSA: What does spelt grain add to the taste of Snow Leopard?

SS: I can recognise Snow Leopard, no matter how many vodkas are put before me, and it’s not easy. I’d go with the smell first. You can smell a little bit of floral notes — a jasmine bouquet. A subtle sweetness then comes through, a hint of vanilla and chocolate. There’s also some viscosity to it.

LSA: How does one go about vodka appreciation, instead of just casual drinking?

SS: You have to approach it like a single malt whisky, or like a Grand Vin from Bordeaux. You start off with the nose, then look at the structure — its legs, and the way it comes down. Lay it on your tongue, and chew it like a whisky. Go back to the bouquet. That’s how you should taste it.

LSA: If someone isn’t at the point where they can appreciate vodka neat as yet, what are some stepping stones to take?

SS: I think they probably are. I remember a number of my friends told me, ‘Hey, I really applaud what you’re doing, but I just don’t drink vodka.’ That’s probably because they’ve experienced vodka the same way I used to — taking shots of the bad quality stuff. I told them to get rid of the prejudices that they had experienced as unsophisticated drinkers, and just try it. Have it chilled in the fridge, not necessarily on ice. The colder it gets, the sweeter it is. They never realised vodka could taste like that.

I was previously in Cape Town, and we were having a tasting of excellent whiskies. After dinner, we moved on to the martinis. I thought to get some tumblers, quality big ice chunks, some black peppercorns, and coriander seeds. You bruise the seeds, then mix it in with the vodka to get the flavour out. It’s absolutely delicious. That’s how I would sip it. You can also have it with sparkling water, with some elderflower. Be brave, and go for it.

Interview Spirits Snow Leopard vodka Snow Leopard Stephen Sparrow how to appreciate vodka how to taste vodka spelt grain vodka wildlife conservation
Beatrice Bowers
Features Editor
Beatrice Bowers writes about beauty, drinks, and other nice things. When not bound to her keyboard, she moonlights as a Niffler for novels and can be found en route to bankruptcy at your nearest bookstore. Don't tell her boss.
Drinks Beauty

Bar guide: Where to drink in Jewel Changi Airport

With 13 bottlings to its name, Lyre’s is filling a big gap in the non-alcoholic spirits market