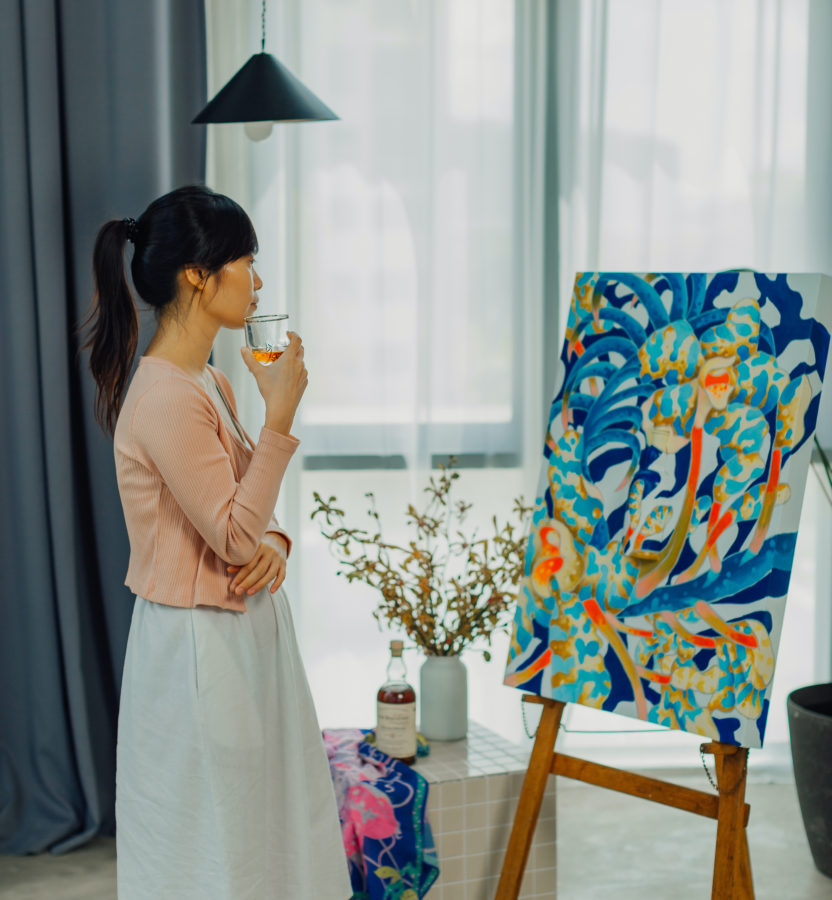 Making whisky takes a cartload of work, but a Scottish distillery is putting the art in it with an exhibition in Singapore of whisky soaked works by artists around the region.

Happening at the ArtScience Museum from 26 November 2021 to 5 December 2021, The Makers Project by The Balvenie is showcasing pieces by six Southeast Asian craftsmen inspired by the whisky-making process.

The Balvenie calls their process the Five Rare Crafts, and each batch undergoes the same steps before it reaches the bottle. The first craft involves growing the barley, and the distillery is the only one in Speyside that maintains their own farm.

Malting the barley is the second craft, a germination technique that turns the grain’s starch into fermentable sugars. The Balvenie is one of the few Scotch producers that still do this themselves.

Once the malted barley is milled and boiled to extract a sugar rich liquid, it goes into the pot stills. These stills are maintained by the distillery’s coppersmiths, who take decades to master their craft.

The distillate is then poured into the barrels, which are built at The Balvenie’s cooperage. The people who work there are called coopers, and some of them can tell the difference between oaks just by feel.

Once the whisky is ageing in wood, they fall under the responsibility of Malt Master David C. Stewart MBE, whose knowledge and nose helps him determine how each cask would mature.

To highlight their craft, The Balvenie launched The Makers Project to inspire a new generation of creatives in their fields. For their inaugural exhibition in Singapore, they partnered with local and regional illustrators, visual artists, painters and printmakers to create works that blend local motifs with the brand.

From Singapore, Adeline Tan painted a flower installation based on local culture and nuances. Malaysian Fern Chua pushes the boundaries of batik block printing with the use of sponges, brushes, drops and eccentric colour combinations.

Vu, better known as Caubetho, turned to pop art to reference his Vietnamese heritage. For Thai artist Phannapast Taychamaythakool, she imagined a stately piece that wouldn’t be out of place in a royal palace.

From Indonesia, Diela Maharanie’s vibrant hues recall traditional costumes and the natural world, while Daryl Feril of The Philippines depicted animals and fauna in a lush and intricate depiction form.

The exhibition costs S$28 per person and includes two drams – The Balvenie DoubleWood 12 and The Balvenie Caribbean Cask 14 – that you can enjoy at the gallery. They’re also offering $8 off if you use the promo code LIFESTYLEASIA8OFF. To get the discount, select the tickets and enter the code before checkout.

The Balvenie Presents: The Makers Project takes place from 26 November 2021 to 5 December 2021 at the ArtScience Museum, 6 Bayfront Ave, Singapore 018974. Tickets can be purchased here.

Whisky Arts Events The Balvenie
Jethro Kang
Jethro enjoys wine, biking, and climbing, and he's terrible at all three. In between them, he drinks commercial lagers and eats dumplings.