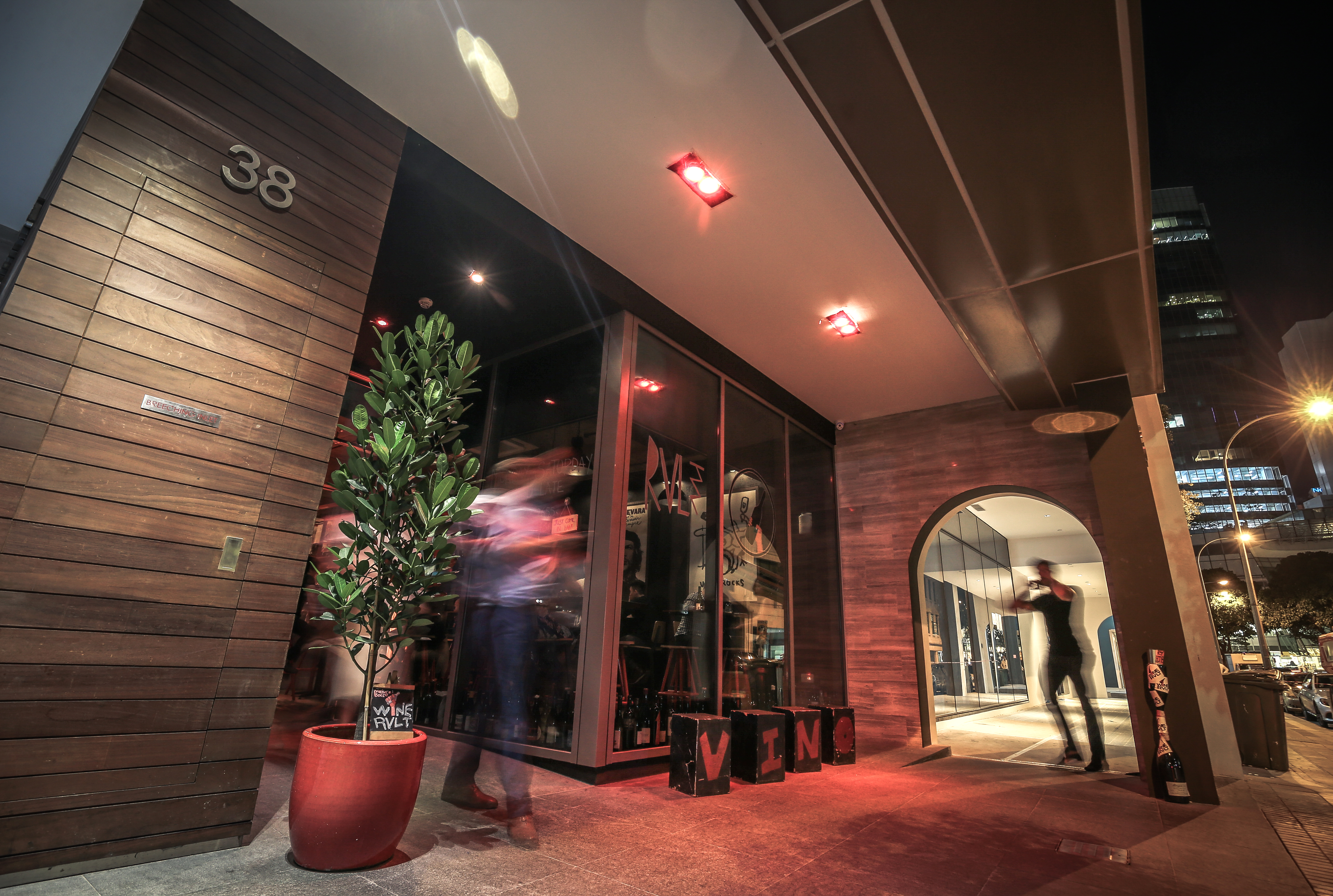 Progress is often the child of revolution, and while that statement may not be a totalising one, it does ring true when we look at RVLT, a two-year-old wine bar on Carpenter Street.

Established by former wine industry professionals and longtime friends, Ian Lim and Alvin Gho, RVLT is not just one of the many wine bars that occupy Singapore. It has set itself as a contrary force against the template of starched-collar wine bars in our city that flourish on stocking their cellars with big-name producers sold at top dollar.

Because of their philosophy, RVLT has become a cult figure amongst industry insiders and avid drinkers in Singapore, not just for its sustainable wine programme that is ahead of the curve, but because its glass doors open to a world away from the world, if you will.

At RVLT, wine appreciation is purposefully robbed of pretension. Once you walk past the fitting “no drama” sign by its entryway, dim lights and a quality playlist take over, setting the tempo for the chatter and clink of glasses that go on all night. Everything is easy-going in this wine-fuelled hideaway, from the T-shirt and jeans-clad service team that ensures your evening is as smooth as the pour in your glass, to the substantial food menu that serves inventive bar bites that keep you satisfied (their wagyu patty melt is the stuff legends are made of).  There is also no wine list, only a wall lined with bottles that function as a visual menu, welcoming touch and feel before you land on a decision.

Lim, Gho and the floor staff are more than happy to aid your choice, to tell you more about the wines on offer without belabouring you with jargon-heavy information. All they ask for, in return, is an open mind and a keenness to discover new wines or profiles because Lim and Gho believe that is at the core of wine appreciation. Just don’t ask them to serve you your champagne in a flute.

In celebration of their second-year anniversary, we speak to the founding duo of RVLT about how the bar has managed to cement itself as a safe space away from the echelons of wine snobbery, and how that uncompromising drive to “keep it real” is the best part about wine culture many of us have forgotten about.

What is the mould that RVLT claims to break?

Alvin Gho (AG): Before we started the first RVLT at Killiney, we spent more than a year just lamenting about the local wine bar scene, and how uninteresting, uninspiring and expensive it was. Because of that, we created RVLT as a place we’d like to go on our off-days, serving the kind of wines we’d like to drink, the music we’d like to listen to, and the ambience we wanted to hang out in.

Ian Lim (IL): We started the bar out of sheer frustration at the wine scene in Singapore. When we wanted to drink wine, we’d go out and discover everywhere was more or less the same. There is so much to discover in the wine world and everyone was just drinking the same Sauvignon Blancs, the same Chiantis and the same Pinot Noirs all the time. Sticking to the same wines over and over defeats the purpose of drinking wines in the first place. We wanted to recreate the sense of excitement we felt at bars overseas, where there was this joy at discovering new wines and new experiences.

Given that RVLT is the complete opposite of a traditional wine bar, did you face difficulties when you started?

IL: Of course. I mean, we’re still fighting the fight. We’re still trying to get people to understand what we’re about.

AG: We are very honest about the way we do things. People have griped that the music is too loud, or that our wines are served in stemless glasses, claiming that their wines will get warm faster, which isn’t true. People complain that we don’t serve champagnes in flutes, which is, honestly, the most useless glassware ever invented. At some point, it’s not about educating people or trying to convert them to our way of things. It’s just wanting people to have an open mind. You may not like it but try it. Try, then decide whether you like it or not. As long as they have an open mind, you’re open to discovering new things.

“We’re still fighting the fight. We’re still trying to get people to understand what we’re about.”
Ian Lim, co-founder of RVLT
What do you two have to say to the fact that traditional wine bars, with their shortcomings, still do have an appeal for a certain crowd?

IL: They want to feel special.

AG: Singapore is not the most progressive in terms of trends or being leaders when it comes to new concepts. When it comes to the demographics of our wine drinking population, they’re mostly in their 40s to their early 60s. These people grew up drinking wines in a certain way. They came out of a particular school of wine appreciation, and so they continue remaining in that comfort zone. They stick to what they know.

Why the decision to focus on natural wines?

AG: In all honesty, we saw an opportunity. Sommeliers and consumers in all the countries we travelled to were crazy about the category, though, at the time, it was slow to gain traction in Singapore.

IL: My first experience with natural wines was some seven years ago, where my previous boss bought some for the team and me to try. These wines were naturally fermented and cloudy. When we all drank it, everyone was hesitant, but I really enjoyed it. It seemed more real, in a sense. The wine was more energetic, so it piqued my interest.

AG: The more we dived into the category, we realised that these wines were something we enjoyed drinking. Not because they were funky or different, but the taste appealed greatly. It has drinkability, no matter the vintage. There’s no need to wait two hours for the wine to be decanted, or to age it for ten more years before it can be enjoyed. You crack the bottle open, pour it in a glass and wow, it’s tasty. That was what wines were supposed to be, to us. But we are trying to stay away from calling ourselves a natural wine bar, as a whole.

AG: In the beginning, calling our wines natural wines was the best way to explain to the masses what we were about, but we’re now trying to steer away from the term because it has evolved into something ambiguous, too technical. We want to keep it simple.

IL: At the end of the day, we’ve always been a real wine bar where people can have a good time enjoying wines. That is what is most important to us.

RVLT doesn't just deviate from the norm with its offerings, but also the unconventional wall of wine bottles you have instead of a list. Why?

IL: Because we were lazy. Well, also because it is a lot less intimidating for customers to be able to feel and look at the bottles rather than just names on a list. When you’re faced with line after line of Spanish or Italian, it can be daunting.

AG: We wanted to incorporate a retail element to selling wines. Instead of just looking at names on a paper, why not let consumers take a look at the bottle? No one is judging if you want to purchase by label alone, or by the price on the bottle.  Even as someone who has been in the wine business so long, I still find wine lists intimidating, especially when there’s no visual reference. Having a bottle in hand gives you that moment of identification.

We also come from a background where we’ve both done wine lists all our career, updating it day by day, and it isn’t sustainable.

How would you summarise the bar you both have created?

IL: The black hole. The moment you come in, you don’t leave sober.

RVLT
Address
#01-01, 38 Carpenter St, Singapore 059917
Website
Website Here
Phone
+65 6909 5709
Wine Bars natural wines rvlt
Beatrice Bowers
Features Editor
Beatrice Bowers writes about beauty, drinks, and other nice things. When not bound to her keyboard, she moonlights as a Niffler for novels and can be found en route to bankruptcy at your nearest bookstore. Don't tell her boss.
Drinks Beauty