Home > Food & Drink > Reviews > Bread sushi is a thing, and you can try it at Small’s doughmakase 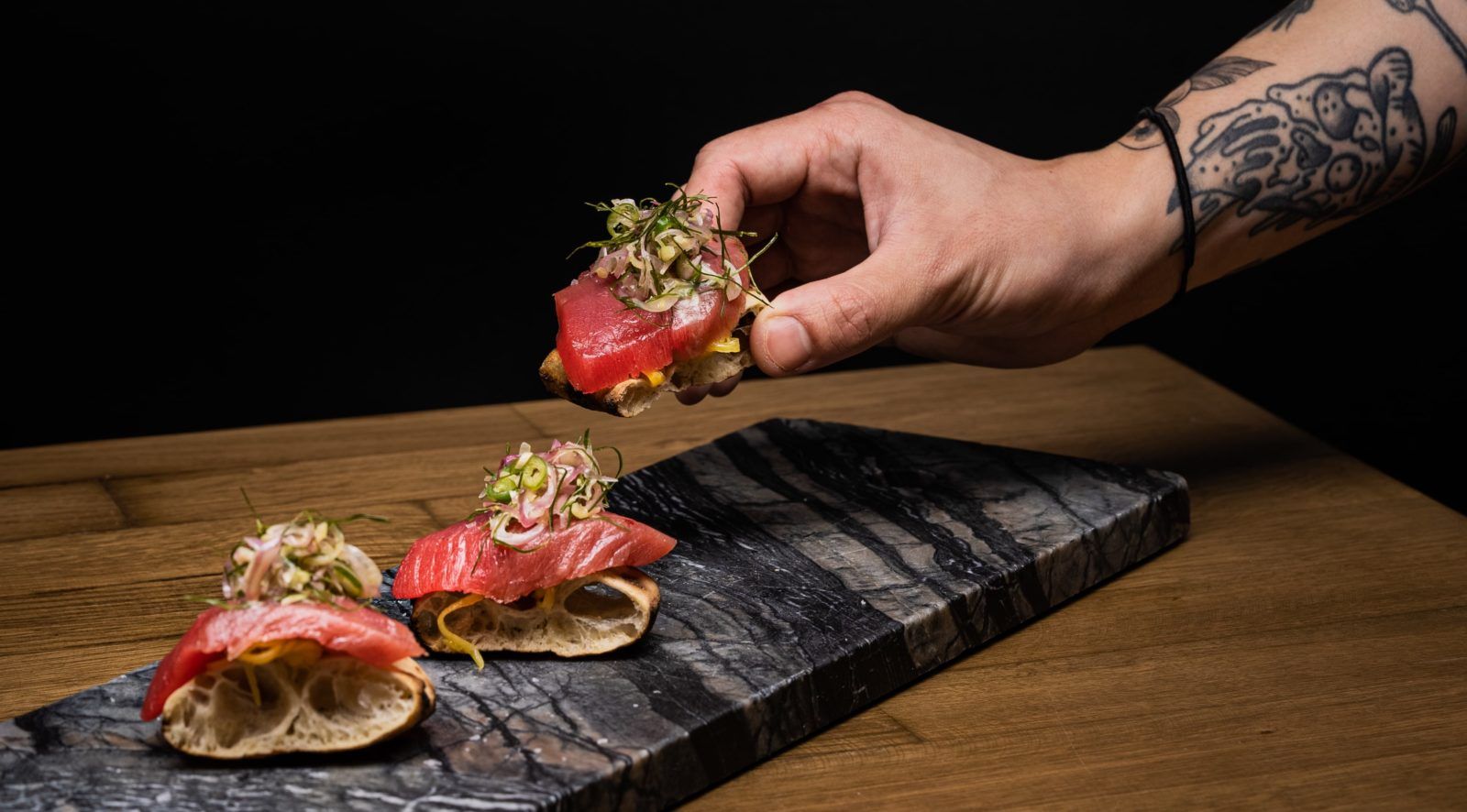 Bread sushi is a thing, and you can try it at Small’s doughmakase

Food & Drink
Bread sushi is a thing, and you can try it at Small’s doughmakase
Share this article
Next article

A quick google search for “bread sushi” won’t prepare you for anything you’re about to have at Small’s.

In fact, are those two words even supposed to be put together? Chef Bjorn Shen says yes, or in his own words, “The idea was simple – keep evolving, keep breaking culinary rules, keep fucking up new shit.” (For reasons that include keeping our jobs: we’re not swearing, we’re just quoting).

What was once a tiny — quite literally, it was a 2m-by-2m space that only accommodated 4 people — R&D kitchen has now evolved into a back-door access speakeasy apartment-of-sorts, complete with a U-shaped counter and a cosy living room area. Yes, the Borat pictures, penis cushions and Wardy Jourbert (for the uninitiated, please google his name discreetly) memes aren’t going anywhere.

Small’s was created out of the Artichoke chef and owner’s desire to fill the void of artisanal pizzas with creative toppings back in January 2020, but the space has since evolved from its pizza omakase concept to become an incubator for “omakase-ing other things that (have) never been omakase-d before.” The bread sushi menu, or doughmakase, leverages off the team’s dough making know-how, and features a rotating menu of three snacks, 8-10 bread-sushi, one hotpot and two sweets.

Two of the three snacks are subject to change, but the Wasabi Pea mainstay will really set the scene for all the crazy (delicious) things you’ll have for the night. Bread that’s been flattened in the love letter press forms the base of this one-bite snack, before it’s topped with fresh baby peas and housemade wasabi dressing.

“Stick your tongue to the roof your mouth,” Shen says belatedly — only after we’ve cried out in shock. Think the unassuming crunchy wasabi coated green pea pieces that some (sadistic) homeowners like to place on their snack table to light your nose on fire. It’s safe to say we could smell colours at this point.

Now, on to the bread sushi. Rather than beads of rice and simply touched pieces of fish that’ll lead you to an omakase apotheosis, you’ll find high hydration, long-aged doughs that have been subject to high temperature baking, low temperature baking, binchotan grilling, deep frying and steaming.

The one-bite morsels start off light with white fish. A crowd favourite at the table, the Shima Aji is a mouthful of striped jack fish, served on an airy dough that’s been kissed by some Spanish-style grated tomato, before a familiar ginger-scallion relish rests gently on top as the perfect condiment to the nigiri.

Nothing is really quite like its name here at Small’s. The California Roll, for instance, comes with no seaweed: instead, you’ll find a deep-fried pizza dough pocket that’s generously stuffed with familiar flavours of cold crab meat, ohba leaf, cucumber strips, tobiko, nori mayonnaise and yuzu dressing. We attempted to have this in one bite, but the key word here is attempt. Maybe you’ll be able do better than us.

In the same line of thought, the Chirashi is an ode to Singaporeans and their love for Chirashi bowls — served on a crispy lavosh, the colourful rectangle cracker comes adorned with a scallops, whelk, assorted fish, tamagoyaki, trout roe, pickled cucumber and uni cream.

Other standouts from the menu include a (golden) shower of shaved frozen monkfish liver that melts quickly on the flamed seared flounder fin, complete with green papaya strips stewed in lime juice, fish sauce and sugar for a Thai-inspired kick you won’t forget.

The doughmakase menu is set to include inspirations taken from the team as well. At our tasting, we got to try the Monga Ika, influenced by team member Jules, who hails from the tropical island-nation of Mauritius. The Mauritain version of the vindaloo sees a naked neapolitan pizza crowned with a finger-licking mix of House-pickled baby cuttlefish, pumpkin cream and house-pickled shallots.

As with any traditional omakase fashion, the meal winds down with hot soup and desserts. The chutoro nabe came studded with playboy bunny daikon pieces, but if you’re dining in a group, you might even get a phallic-shaped one — a Small’s version of the Galette des rois surprise, if you will. The carb isn’t forgotten here either: think dense, chewy bread dumplings that’s almost like a cross between a gnocchi and toppokki.

An interactive serving of pizza crust ice cream, bread cracker, shaved truffle and 20-year aged mirin, plus a bowl of strawberry, yougurt and olive oil over at the couch later and the two-hour showstopper of a meal comes to an end. “What a time to be alive,” concludes Shen at the end of his media note (we’re singing this to the tune of Doja Cat‘s Cyber Sex, by the way), and we couldn’t agree more.

Is calling these concoctions bread sushi considered blasphemous? Perhaps. Is Shen not looking forward to the day he has to serve Japanese customers? Maybe. But will you have a smashing good time here? We’re gonna bet two penis-shaped daikons you will.

Hero and featured image credit: Small’s. All other images credited to Lifestyle Asia unless stated.

bjorn shen Small's Bread sushi doughmakase
Jocelyn Tan
Senior Writer
Jocelyn Tan is a travel and design writer who's probably indulging in serial killer podcasts or reading one too many books on East Asian history. When she actually gets to travel, you can find her attempting to stuff her entire wardrobe into her luggage. Yes, she's a chronic over-packer.
Travel Design
Sign up for our newsletters to have the latest stories delivered straight to your inbox every week.