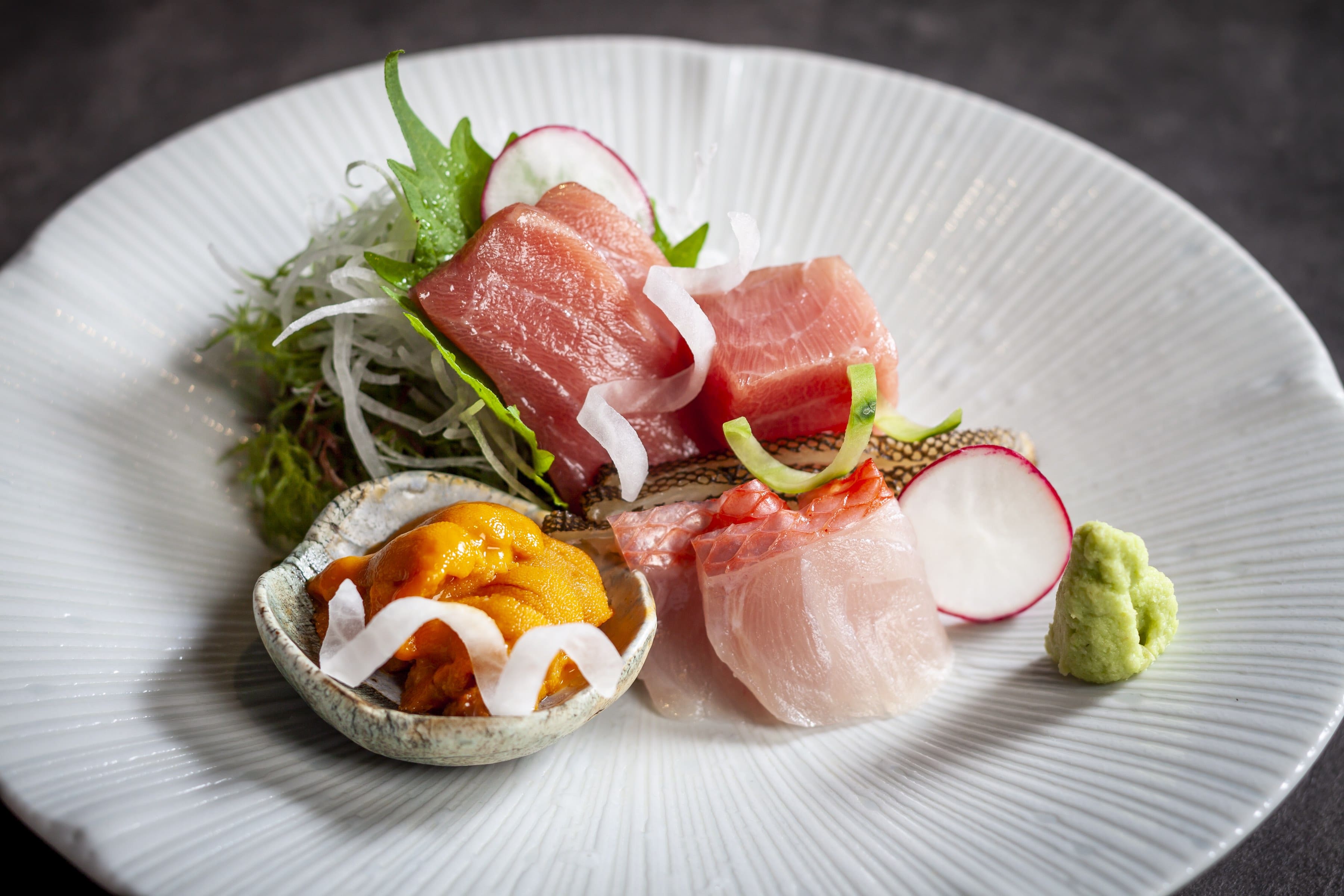 Depending on whom you ask, Cuppage Plaza is known for different things. There are the dodgy massage parlours and karaoke pubs scattered across its various floors, while its basement plays host to a Bollywood club popular for its rousing tunes and dance performances. On the epicurean front, the mall is home to many Japanese eateries, which range from buzzy izakayas to classy omakase restaurants. While Japanese salarymen are among the majority dining at these spots, it’s not uncommon to see families with children stopping by for their fix of authentic Nippon cuisine.

The newest entrant to this foodie enclave is Kappo Shunsui, a Kyoto-style restaurant serving up Kappo cuisine, which essentially focuses on five different cooking techniques: Grilling, steaming, frying, simmering and raw preparation. The establishment is the result of a collaboration by its executive chef Tomo Watanabe and the folks behind modern European eatery 999.99 (Five Nines).

Kappo Shunsui is located on the fourth floor of Cuppage Plaza. Locating it may be a slightly tricky affair, as the restaurant is hidden behind an unmarked gold door along the corridor. During our visit, we assumed it was either a decorative feature or a back door for another eatery, and almost wandered into its neighbouring restaurant instead.

To enter, first-time customers have to ring the doorbell on a biometric scanner mounted beside the door, and wait for one of its kimono-clad staff to open it. Regular patrons are considered as VIPs and get to have their fingerprints registered for easy access. We have to admit we’re not quite sure how feasible this system will be in the long run.

Within the restaurant is a cosy 19-seater space furnished in black with touches of gold. Much thought has gone into making diners feel like they’ve been transported to Japan — the à la carte menu is handwritten daily in Japanese calligraphy by Watanabe himself, the crockery is specially commissioned from a Japanese artist, and guests who order sake will have it presented to them in dainty little cups that range from a vessel with a perforated design to a “singing” cup that produces a whistling sound when one drinks from it.

We opted to sit at the counter, where we could watch Watanabe in action as he deftly sliced various types of fish and meticulously plated every dish. Regular table seating, which can accommodate up to eight guests, is also available.

Hailing from Tokyo, Watanabe’s latest venture marks his first foray into the Singapore culinary scene. He previously worked at An in Roppongi, Tokyo, before opening his own restaurant, Shunsui, in the city’s Minami Azabu district. The now-defunct Shunsui was included in Michelin Guide Tokyo’s Bib Gourmand list for three consecutive years between 2015 and 2017. These achievements are proudly framed on a wall in Kappo Shansui.

Guests can choose between a 10-course omakase set ($199++) or à la carte dishes the likes of tempura vegetables, claypot rice with baby sardines, sashimi and tamago. We decided to leave our meal in the good hands of Watanabe, and chose the omakase option. As it’s based on seasonal produce, this menu changes from time to time.

We kicked off our dinner with a light appetiser of pike conger, a type of eel imported from Hyogo, covered in a soft and tangy tosazu jelly comprising soy sauce, vinegar and bonito broth. A stalk of urui (a vegetable brought in from Yamagata) and a single broad bean added crunch to the simple dish.

Next up was a clear kelp and bonito-based soup containing a steamed dumpling made of fish and hard clams, alongside a mix of Japan-imported vegetables such as udo (a type of spikenard) and butterbur. The dumpling was chewy, meaty and delicious, and went well with the clean-tasting, yuzu-infused broth. A slice of melon added a subtle hint of sweetness to the whole medley of flavours.

This was followed by a platter of fresh sashimi, specifically tuna belly from Aomori — which was pleasingly fatty and yielded a firm bite –, slippery smooth Chiba red snapper, and spongy and creamy big leaf squid from Nagasaki. Savour the latter with a bit of the salt and wasabi provided, to add flavour dimension to its mild taste.

The restaurant’s sushi didn’t disappoint, either. We were served gizzard shad (a type of herring), which had been well-marinated in vinegar to mask its fishiness, and conger eel, which had been steamed to let its natural sweetness shine.

We were barely midway through our meal, but were already feeling rather full by this point. Watanabe, though, showed no signs of slowing down as he rolled out his next concoction — a boiling pot of soup filled with chunks of kelp grouper, Chinese cabbage and leek, and accompanied by a small sauce dish of grated radish, chilli and ponzu. Mix the sauce ingredients together, and dip the various soup items into it before eating. The ponzu’s citrusy tang helps temper the slight fishiness of the grouper, while adding a burst of flavour to the otherwise plain-tasting broth.

Other noteworthy dishes included a silky chawanmushi made from Japan-imported eggs and luxed up with briny slivers of uni, and fork-tender A4 Omi roast beef that had been grilled on the surface before being jazzed up with dashi and onion purée. The latter also came with a side of sesame-dressed watercress and white asparagus salad — presumably to make us feel less guilty about wolfing down the fatty, well-marbled beef all too quickly.

We also liked Watanabe’s claypot rice, which was layered with generous portions of red snapper from Chiba, and studded with vinegar-marinated young ginger for a dash of sourness and spiciness.

What’s outstanding about this dish is the meticulous processes that have gone into it. Watanabe uses a blend of koshihikari and sasanishiki rice — which he favours for their firm texture and mildly sticky consistency — and cooks this mixture in a claypot with dashi. As for the red snapper, it is seared over binchotan (white charcoal) until it is 80 percent cooked, before being placed atop the rice. Finally, the dish is presented with a bowl filled with miso soup and sweet Shijimi clams.

For dessert, we were offered a choice between warabi mochi with a cherry, or an “adult” dessert comprising a dessert sake and cubes of mimolette cheese. Having eaten our fill of savoury dishes throughout the evening, we opted for the former. We had no regrets — the mochi was delightfully wobbly and sticky, and made for a refreshing finale to the indulgent dinner.

What we like about Kappo Shunsui is its emphasis on flavour. Its dishes may seem rather simple and uncomplicated, but much effort has gone into their cooking and preparation — Watanabe’s claypot rice is testament to this. The restaurant also has a pleasant, relaxed atmosphere thanks to its dark furnishings and intimate space that, when filled with Japanese chatter from other guests, may well fool you into thinking you’re dining in an actual eatery in Japan.

Another impressive aspect of Kappo Shunsui is its extensive sake list of almost 100 labels, available by the glass or by the bottle. Watanabe is a qualified kikisake-shi (sake sommelier), and even uses a special handmade copper pot to heat up his sakes to the right drinking temperature. If you’re seeking something a little more unconventional, he can also recommend off-the-menu bottles from his own private collection.

If you’re still undecided, here’s something that may change your mind: From 16 June onwards, the restaurant will change its 10-course omakase menu price to $299++, and plans to launch an eight-course alternative for S$199++. With just over a week left to the price hike, we recommend you make your reservations pronto.