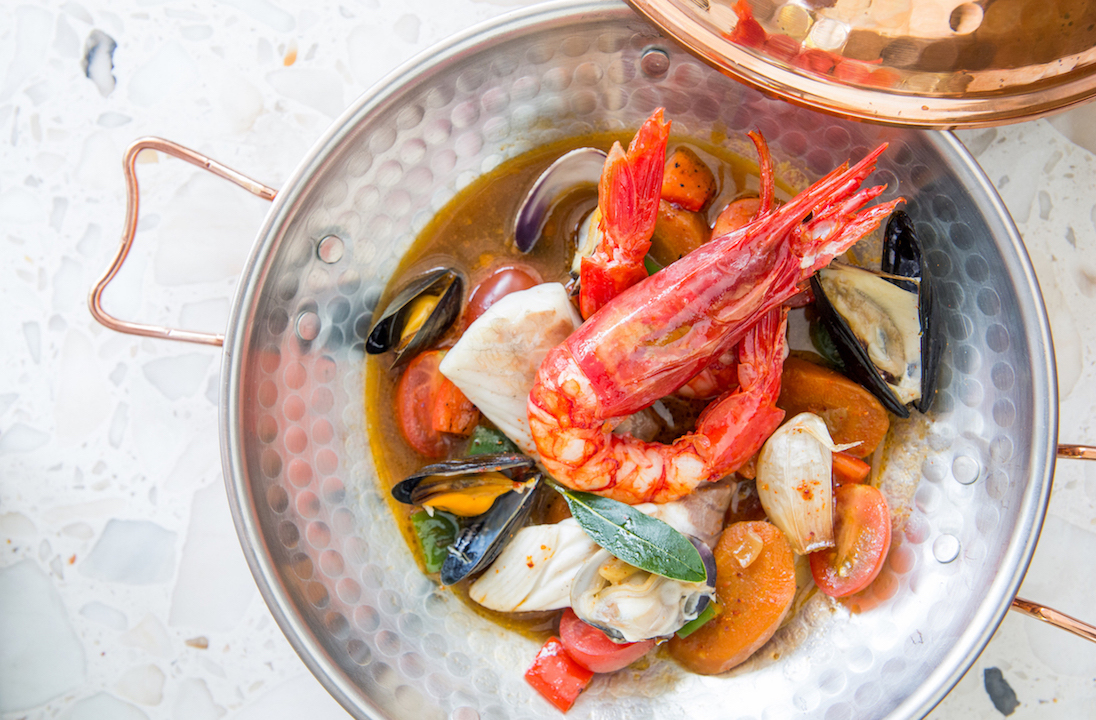 BBR by Alain Ducasse is a surprise on so many levels. With 21 Michelin stars under his belt, French-born chef Alain Ducasse is synonymous with his numerous fine-dining spaces. Yet, his Raffles Hotel outpost is a casual establishment that celebrates the property’s rich heritage and its beginnings as a social club. Fans of the old Bar and Billiard Room will not be able to recognise the space the first time they walk into BBR.

The space has made a 360-degree change into a contemporary Mediterranean restaurant, complete with hues of red, bronze and blue. At the heart of it lies a large open kitchen, over sailed by an elegant blue sculpture complete with reflective ‘scales’. It is reminiscent of a giant fish swimming across the ocean that transports diners to the sights, sounds and smells of the Mediterranean.

The restaurant doesn’t just pay homage to Raffles’ past: Mediterranean fare has always held a special place in the heart of Alain Ducasse. His early years in the kitchen was spent working along the Mediterranean coast, at establishments like Moulin de Mougins in Provence and Le Louis XV in Monaco.

Complete with a wood-fired rotisserie and a pizza oven fire up, the open kitchen showcases how dishes are prepared and plated. Diners can expect to catch glimpses of the boyishly handsome Louis Pacquelin, who will be helming the kitchen. The kitchen prodigy has been working with Alain Ducasse for many years and was specially selected to present his cuisine here.

Be taken on a boozy journey down the Mediterranean sea as the bar serves a spectrum of spirits from France, Spain and Lebanon. Diners who enjoy wine pairings can also consult the restaurant’s in-house sommelier.

The starters here come in a variety of forms. Light eaters will enjoy the Tartare di tonno al limone, a tuna tartare bathed in lemon juice and sprinkled with a touch of spice. The citrusy palate cleanser is a refreshing start to any meal. Alain Ducasse’s personal favourite, the Pissaladiere, is a caramelised onion and anchovy tart that comes off a little stronger than others. The crust is more cushiony than crispy, so the portion is pretty sizeable. Pulpo a la gallega was a collective favourite. Hailing from Galicia, Spain, flavours of the smokey grilled octopus were paired with chopped baby potatoes and enhanced by a stunning green piccata sauce and an orange piquillo pepper sauce. The octopus was tender with each bite, unlike the chewier textures that locals are acquainted with.

Flavours of a classic Mediterranean congregate in Cataplana de marisco, a hearty Carabineros shrimp and shellfish stew. The Portuguese dish is served in a copper cataplana, coupled with fish, mussels, clams and topped with sweet, succulent prawns. What made us come back for more was the robust flavours from the stock it was soaked in. The intensity of the tomato-shellfish stock made for a spoonful (or three) of warmth and pure bliss.

Even for those who aren’t fans of big meats, the striploin steak is worth an order just for its bell pepper sauce alone. Lomo a la brasa, mojo verde is a platter of tenderly sliced Australian grass-fed striploin steak decorated with sweet, roasted bell peppers. Meat connoisseurs may know that striploin cuts tend to include a rim of fat that lends itself to a rich flavour. Compared to leaner cuts like flank, it may get a little heavy for some diners. To counter this, enjoy each bite with a side of piquant sweet green bell pepper sauce made with parsley, cumin and a dash of lemon juice and vinegar.

No meal is complete without dessert, and BBR comes with a couple of numbers that left us hanging for more. Tiramisu may evoke memories of cloyingly sweet mascarpone, but this one was a surprisingly grown-up treat. The espresso dipped ladyfingers were well balanced with the mascarpone and dusted with deliciously bitter cocoa powder. Other highlights include Tiger Story, a charming vanilla entremet. It is beautified with a passion fruit puree that forms a tiger, in recognition of the hotel’s historic tiger tale.

Mediterranean Cuisine Raffles Hotel Singapore Raffles Hotel Alain Ducasse Bar and Billiard Room BBR BBR by Alain Ducasse
Jocelyn Tan
Senior Writer
Jocelyn Tan is a travel and design writer who's probably indulging in serial killer podcasts or reading one too many books on East Asian history. When she actually gets to travel, you can find her attempting to stuff her entire wardrobe into her luggage. Yes, she's a chronic over-packer.
Travel Design