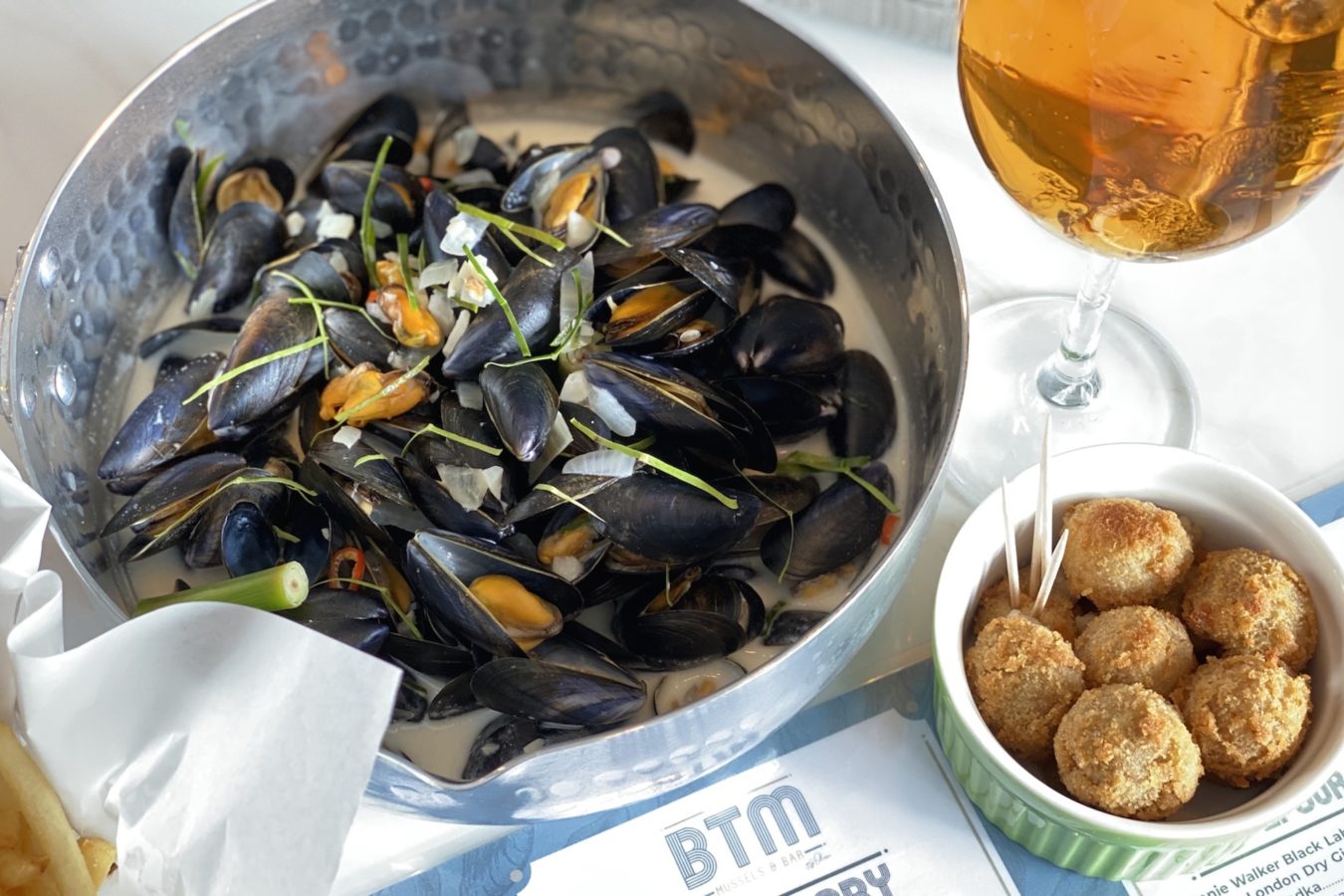 In a time of plant-based and self-proclaimed clean eating joints, BTM Mussels and Bar and its slew of sinful dishes are a breath of fresh air.

The establishment is the brainchild of Olivier Bendel, who elevates the classic dish of moules-frites by using exceptionally fresh produce from France and Europe. What makes the eatery stand out, however, is its playful spins on the traditional recipe.

The menu currently spans seven intriguing flavours of moules-frites, ranging from the classic white-wine based Marinières; the zesty, green curry-style Thailandaises; and the luscious, bacon-topped Ardennaise, all of which are sure to leave diners coming back for more. There’s also a repertoire of carb-heavy small plates to tempt even those most determined of calorie trackers.

We won’t be surprised to see it grow into a popular watering hole for supper-goers and those working in the Duxton Hill area. After all, there are dishes here that beg to be savoured; and reasonably priced drinks (did we mention it’s S$10 for a fruit-infused beer during happy hour?). Here’s what we recommend.

You might also like…
Travel
What to eat, see and do in the boisterous city of Phnom Penh
Food & Drink
LSA Loves: Don’t fight me, but Bismillah Biryani has the best biryani in Singapore

Some might say the craze for prized mushroom is overdone but BTM Mussels and Bar begs to differ. Sink your teeth into a perfectly toasted sandwich of creamy comté; slices of nutty Serano ham; and specks of French black truffle, and regret nothing.

While the menu calls the Tarte Flambée ‘a French-style pizza,’ it’s actually a crispy, oven-baked flatbread from the northern region of Alsace. This one features a bed of caramelised onions slathered with garlic and parsley butter and topped with a generous portion of escargots. A symphony of crunchy textures and sweet-savoury flavours.

The classic dish sees a mound of Bouchot mussels swimming in an aromatic broth made from white wine and butter. This season’s bivalves are air-flown from Parcs Saint-Kerber in Cancale, Brittany into Singapore twice a week. They’re sweet, plump, and have a satisfying chew — everything you could ever want with your seafood, really. Each portion is available at S$36 for 500g, S$48 for 750g, and S$58 for one kg.

Pluck the morsels from their shells with your hands if you aren’t afraid of getting messy, and savour them with slivers of sweet, crunchy onion and ribbons of parsley. Don’t neglect the French fries either; they are a crispy, golden-brown and demand to be dunked into the broth.

Packed with familiar region flavours, the Thailandaises is a distinct ode to Thai green curry. The addition of coconut milk turns the original white wine-based broth into a sauce that’s light, creamy, and sweet-savoury while chopped red chilli gives the dish a mild heat–though it shouldn’t be an issue for any spice-adoring Singaporean. Kaffir lime leaves and lemongrass come together to lend a citrusy tang, which artfully complements the mussels’ natural sweetness.

If you’re game for potent flavours and only have the stomach space for one item on the menu, the Ardennaise is it. The dish is a heavenly concoction of every indulgent ingredient associated with French cuisine: white wine, butter, fresh cream, mushrooms, and smoked bacon. Pair each bite of cream-drenched mussels with the punchy, meaty morsels for something you won’t be able to get enough of.

Restaurant Review seafood bars
Stephanie Yeap
Writer
Stephanie writes about food and culture. She has a soft spot for the visual and literary arts and can be found at the latest exhibition openings. Currently, she's on a quest to devour as much SingLit as possible.