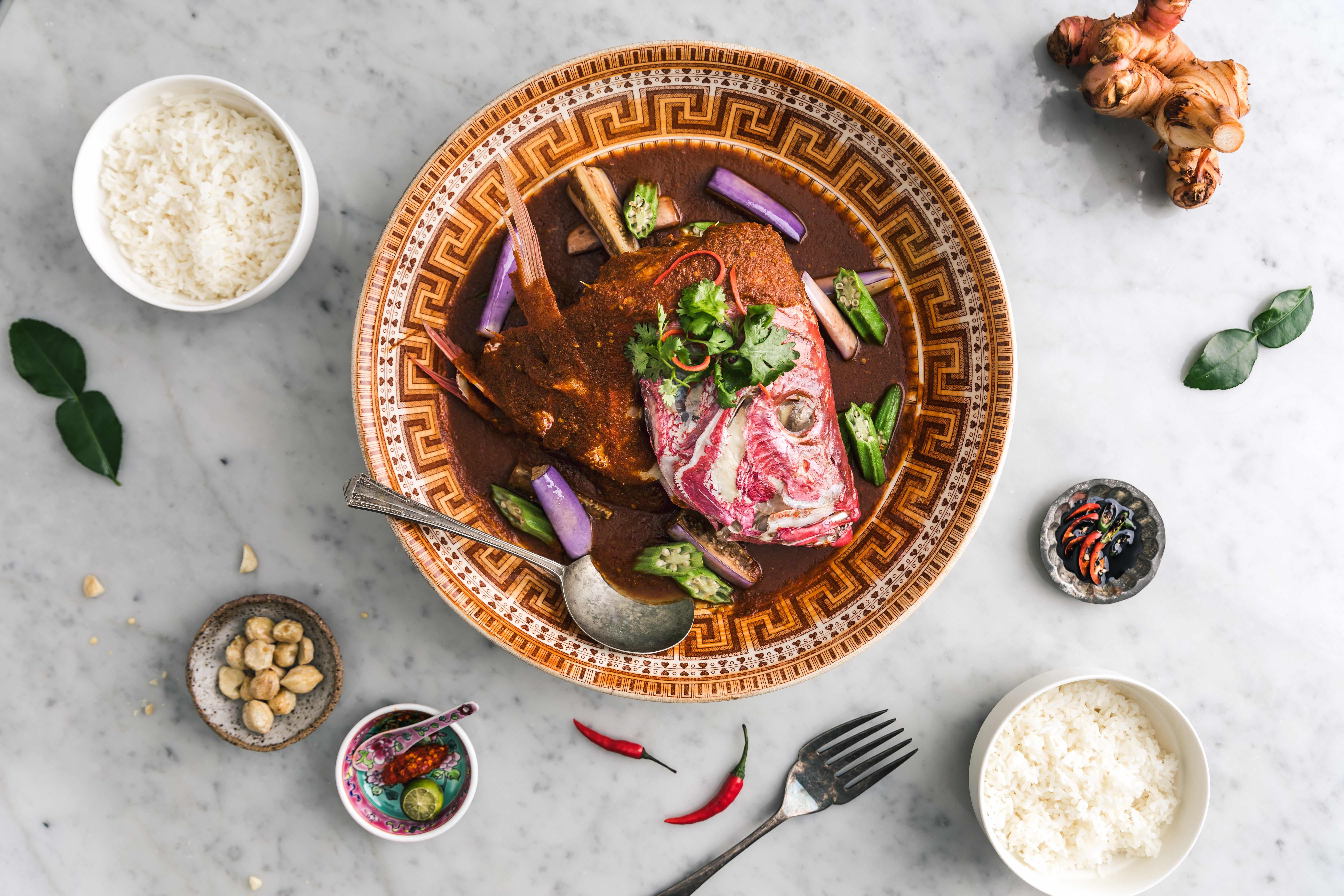 Review: Folklore presents heartfelt cooking with a taste of home

Homegrown chef Damian D’Silva is by no means a newcomer to the local culinary scene. The 61-year-old, who is of Eurasian and Peranakan parentage, is known for being a passionate advocate of Singapore heritage food — which he defines as a blend of the country’s multi-cultural mix of Chinese, Indian, Malay, Peranakan and Eurasian cuisines. This is something he’s been championing for most of his culinary career, which began at the age of 40 after his spending 15 years working as an aircraft engineer.

There was Soul Kitchen, which he opened in the early 2000s along Purvis Street, serving up European and Peranakan food. After the restaurant shuttered, D’Silva launched Big D’s Grill, a kopitiam stall offering similar fare, with signature dishes such as anchovy pasta and sambal buah keluak. When that, too, closed, he set up Immigrants Gastrobar in 2012, where he specialised in Singapore-inspired cuisine the likes of beef rendang and ngoh hiang. Popular as it was, Immigrants shut down after three years, and he started the now-defunct D’s Joint at Timbre+ — where diners could feast on nasi lemak alongside wagyu steaks.

But D’Silva isn’t one to give up. He’s back again in the kitchen at the new Folklore, a restaurant dedicated to Singapore heritage cuisine. The eatery showcases an extensive repertoire of local-inspired dishes ranging from masak nanas (prawn and pineapple curry) to oxtail stew and Aberjaw, a Eurasian concoction of pork ribs and spices. Loyal customers of D’Silva’s past ventures can look forward to old creations such as sambal buah keluak and beef cheek rendang.

The restaurant sits on the second floor and is linked to the hotel lobby right next to it. As it boasts an open-concept space, expect some noise to spill over when large groups of travellers arrive to check in.

That aside, Folklore is a relaxed, casual 80-seater spot furnished with wooden and marble-topped tables, sturdy black chairs, and hanging pendant lamps. One of its grey walls is mounted with shelves adorned with tiffin carriers, books and flower pots for a retro touch. For guests desiring to dine alfresco, the place has 20 outdoor seats.

What sets Folklore apart from many of D’Silva’s past projects is that it’s operated by Destination Singapore, so D’Silva gets to focus completely on the cooking. He has free rein in planning its menu, though, so diners can be assured that the food is entirely his own. The restaurant is open every day during lunch and dinner with an à la carte menu; it also hosts a daily breakfast buffet for hotel guests.

In a nod to D’Silva’s roots, Folklore’s repertoire is heavily inflected with Peranakan and Eurasian flavours. It’s inspired by the food he ate growing up, when his maternal grandmother and paternal grandfather often whipped up sumptuous meals in their home kitchens. Staying true to his grandparents’ recipes, D’Silva creates many of his stocks and ingredients from scratch — a key example is his rempah, which is meticulously pounded using a mortar and pestle.

We began our lunch with the masak lemak (S$14), an aromatic mix of sweet potato leaves, kang kong and spinach immersed in a rich gravy comprising a prawn-infused stock, coconut milk, and spices such as shallots, shrimp paste and candlenuts. We couldn’t resist slurping up every bit of the delicious, slightly spicy gravy, which also contained succulent prawns.

Our next dish was the singgang (S$20), a traditional Eurasian dish comprising deboned wolf herring in a non spicy paste of bruised lemongrass, galangal, turmeric, fresh chilli and coconut milk.

Preparing this is a laborious affair, as D’Silva has to manually remove the fish bones. This may take between 45 minutes to three hours to accomplish, depending on the size of the portion. The result is a mound of fish meat that tastes a little like a deconstructed otah, but with a sweeter flavour.

We also tried the four-angled bean salad (S$12), a piquant and tear-inducing blend of winged beans, sour green mango, ginger flower, dried shrimp, kaffir lime leaves and red and green chillies. Sambal belachan is added for an added punch. We found this tasty and oddly addictive thanks to its contrast of sour and spicy flavours.

If you’re aren’t too keen on spice, go for the chilled tofu with Pidan (S$12) instead, which pairs plain tofu with Japanese pickled radish and century egg for a respite from the other fiery offerings. Compared to the other bold-flavoured options, however, we felt that this dish was rather ho-hum and ordinary.

Next up was our favourite — D’Silva’s sambal buah keluak fried rice (S$22). Available in spicy and non-spicy options, this umami-rich dish features rice cooked with a combination of minced pork, buah keluak meat, sambal (containing lemongrass, chilli, candlenuts, shrimp paste and shallots) and simmered coconut milk. It is finished off with a generous topping of four-angled beans and a fried egg. The rice is robustly flavoured and moreish, with every grain of rice perfectly coated with the black nut paste. There is also a rice-free rendition on the menu, if you’re looking to enjoy the sambal buah keluak on its own.

Other highlights include D’Silva’s rendition of Nonya-style chap chye (S$16) — which features a variety of ingredients such as glass noodles, tau kee, garlic, shiitake mushrooms, pork belly and prawns braised in a mouthwatering pork and prawn stock — and the meaty and hearty ngoh hiang (S$14).

The latter comprises diced shrimps, water chestnuts, minced pork (which D’Silva painstakingly chops up, rather than purchasing pre-minced), and shallots marinated with five-spice powder and salt, before being packed into beancurd rolls. These are steamed for seven minutes and later deep fried till crispy.

Do save space for dessert. A must-try is Folklore’s kueh kosui (S$6), which comprises wobbly blocks of steamed tapioca kueh with gula melaka covered in grated coconut. The kueh has a gorgeous melt-in-the-mouth consistency and isn’t too sweet or cloying.

Humble, honest and heartfelt — these are words that easily come to mind, if we had to describe Folklore’s food in just a few words. The restaurant isn’t a fancy place and doesn’t have the most glamorous location, but it makes up for these caveats with D’Silva’s excellent cooking and commitment to his craft. There are no shortcuts here, as everything is lovingly made from scratch. What we also like is that Folklore serves dishes that aren’t commonly found elsewhere — the singgang, for instance, was something we’d never had before.

D’Silva seems to have found a winning formula with Folklore — we’re pretty sure this restaurant is here to stay.

Service: Courteous and helpful staff, though the food took some time to arrive.

Dining Eat Review Singapore Food Local Food Dining Review Peranakan Food Folklore Singapore Heritage Food Damien D'Silva Folklore Review Eurasian Food
Sara Yap
Deputy Director, Digital Operations (Asia)
Sara Yap is the Deputy Director of Digital Operations at BurdaLuxury, and a contributing writer to Lifestyle Asia’s dining and jewellery beats. When she’s not on the lookout for exciting new restaurants or bejewelled trinkets, she’s probably buried in a riveting read, or reminiscing the good ol’ days with her favourite playlist of ’90s boyband hits.
Dining Pass the Salt Jewellery On The Rocks
Sign up for our newsletters to have the latest stories delivered straight to your inbox every week.