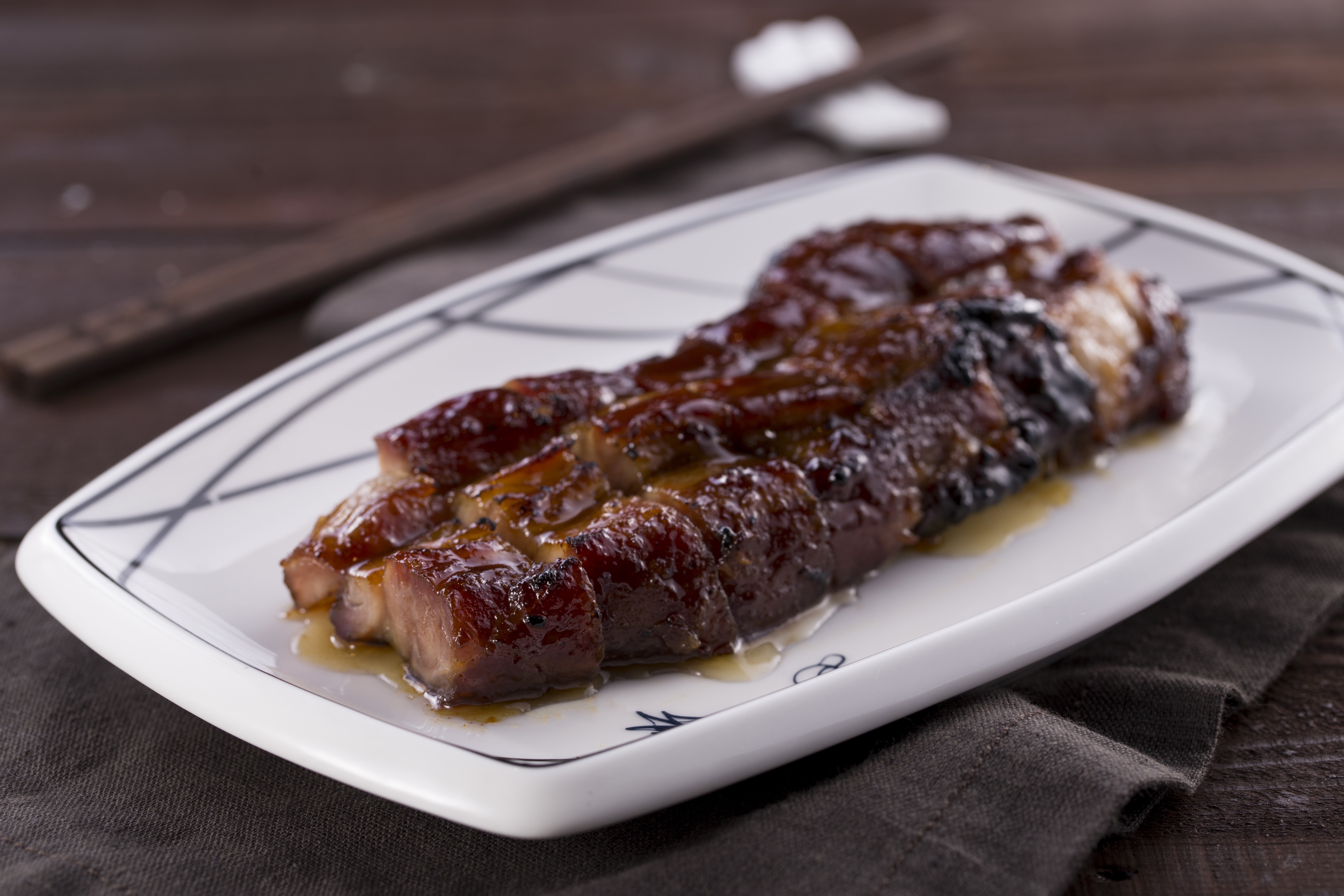 “There’s no Sex on the Beach here,” said Hong Kong chef Alvin Leung with a guffaw, when we recently met him at the opening of Forbidden Duck, his first Singapore restaurant. He was, of course, referring to the controversial edible condom dish, which he previously served at his other restaurant, Bo Innovation, in Hong Kong. “My purpose is to serve Cantonese cuisine with duck. That’s it.”

But our assumptions were quickly debunked when one of our dim sum orders arrived: A trio of steamed black truffle and duck tongue dumplings (S$8). Each dumpling comprised a soft, thin skin packed with a delicious mixture of diced duck meat, truffle and carrots. The duck tongue was inserted into one side, leaving it protruding.  It then occurred to us that the dumplings had been deliberately shaped to resemble duck heads — a cheeky twist on an otherwise conventional-sounding dish.

That wasn’t the only surprise, as we would later find out. Case in point: Leung’s whimsical and colourful take on cereal prawns. But more on that later.

Forbidden Duck’s Singapore outlet is a joint venture by Leung and Hong Kong F&B company Liberty Group. It’s situated on the second floor of Marina Bay Link Mall, in the space formerly occupied by the now-closed Crystal Jade Prestige. Right next door is the newly opened Qi — House of Sichuan, which is also operated by Liberty Group.

The 98-seater Forbidden Duck is an sophisticated and inviting venue clad in shades of grey, blue and brown, and furnished with plush blue chairs, and tables topped with Lazy Susans. Tall windows allow for ample sunlight to fill the place. The establishment also houses two private rooms, which can accommodate up to 12 diners each.

Apart from its steamed truffle dumplings (the “duck head” ones), our favourite was the crispy taro pastry (S$6), composed of juicy duck meat snugged in velvety yam paste and punctuated with strips of preserved vegetable.

Another winner was the Iberico pork char siew (S$30), which was soft, succulent and had a perfect fat-to-meat ratio. It could have done with a little more char on the edges, but we liked that it wasn’t too sweet or cloying.

We also enjoyed Leung’s fragrant and fruity version of sweet and sour pork (S$23) — sticky chunks of meat perfumed with rose and paired with lychees and hawthorn — and the seafood rice in duck soup (S$32), which was a masterful contrast of textures with its crispy rice that was poured in at the table. Every spoonful was an indulgent treat, as the comforting broth was chockfull of ingredients like scallops, prawns and duck meat.

Forbidden Duck’s signature slow-roasted duck (S$88) was a crowd-pleaser too. The bird is first cooked without marinade in an oven for three hours, before being roasted till its skin is crispy. This process also results in tender, pink meat covered with a thin, melt-in-the-mouth layer of fat.

The duck is served with butterfly-shaped steamed buns flavoured with calamansi, as well as condiments such as calamansi-infused hoi sin sauce, smoked sea salt, sugar, sesame oil and garlic. We recommend savouring the duck with just the hoi sin sauce and a dash of smoked salt, so you can fully enjoy its natural flavours.

When we met Leung last month ahead of his restaurant opening, he revealed that there would be a few Singapore-inspired dishes on the menu, including one based on the “flavour profile of laksa”. He followed through on those plans with a tangy and spicy laksa-style duck (S$18), featuring chopped duck meat tossed in a dry laksa paste with strips of taupok (fried beancurd), bamboo shoots and chestnuts, and served on lettuce leaves. Leung said he initially considered adding in cockles, but didn’t want to risk it with “hygiene issues”.

He had a few more tricks up his sleeve. When a platter of what resembled golden puffs topped with Froot Loops cereal, was presented to our table, it prompted more than a few quizzical looks. Leung then explained, “This is my take on cereal prawns, my least favourite dish in Singapore.”

In his quirky interpretation of the zichar staple (S$30), prawns are fried in batter before being coated with salted egg yolk and sprinkled with the brightly hued cereal. Mayonnaise and diced fruit are added on top to prevent the dish from being too dry.

The last surprise of our meal came in the form of the intriguingly named Giant Egg Tart dessert (S$6). Standing at more than twice the height of a conventional egg tart, each pastry contains a top layer of wobbly egg custard and a core of sweet and sour pomelo and yuzu jam. The jam gushes out when the tart is broken apart, so expect things to get messy.

It may seem like Leung is playing it safe with his maiden Singapore venture, but for what the restaurant lacks in terms of adventurous offerings like the ones he produces at Bo Innovation, it more than makes up with well-executed fare — some of which are incorporated with a clever, playful spin. The food is reasonably priced too, with prices on par with that of other Cantonese restaurants without a celebrity chef tag.