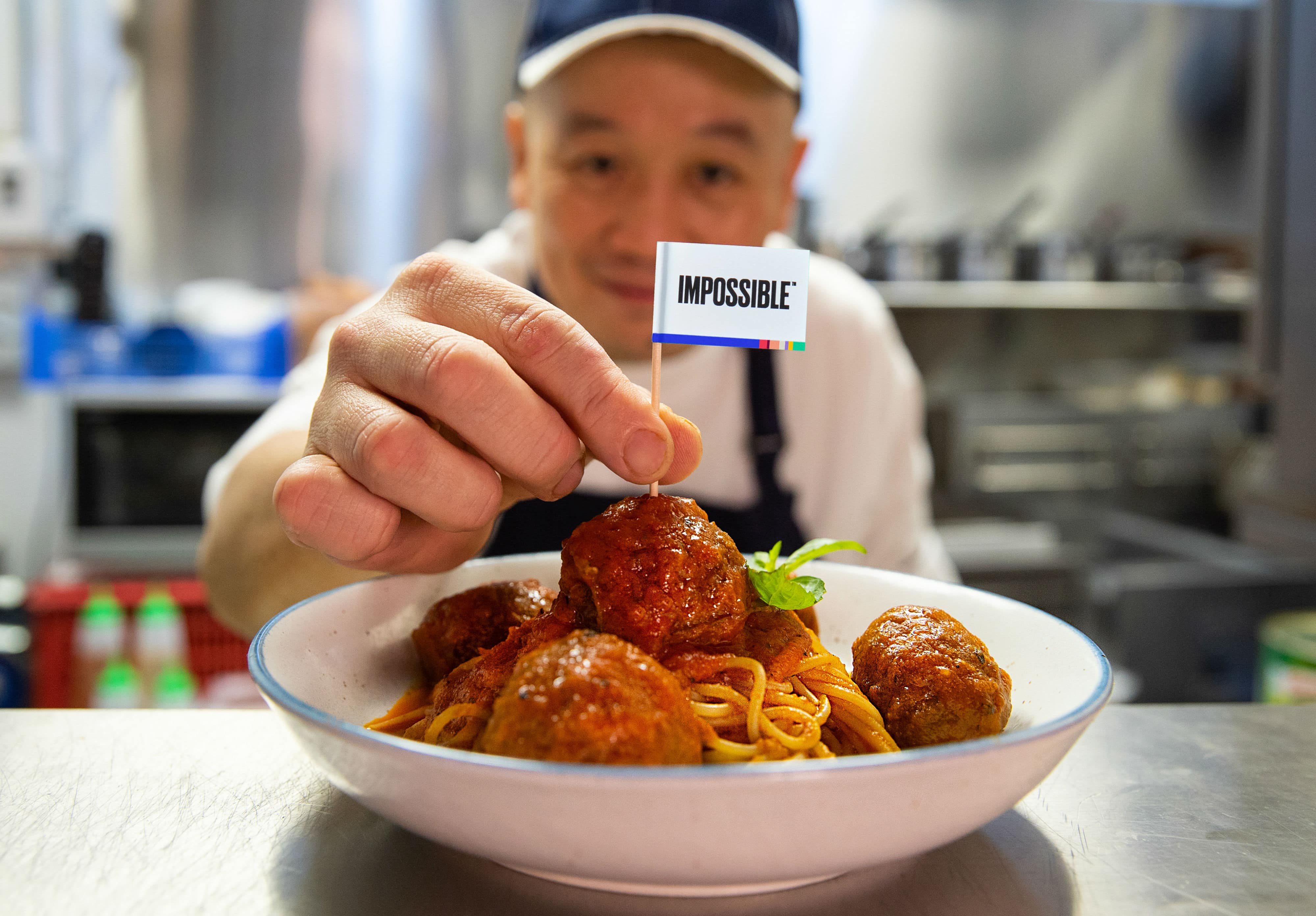 Review: How will Impossible Foods work in Singapore’s dining scene?

Local restaurants are putting themselves on the line for Impossible Foods, and that’s quite a reassuring thing to know for diners who are still on the fence about trying the plant-based meat ‘miracle’.

Curiosity for Impossible so far has been very telling. A preview event at Lau Pa Sat, featuring Park Bench Deli burgers and other dishes using Impossible, drew in hundreds of people wanting to see and taste the ‘meat’ themselves. Few were disappointed. Impossible looks, sizzles and tastes like beef.

For now, Impossible is available just as a mince. The Silicon Valley-based company seems to be dancing around the idea of going even more controversially into the ultimate meat indulgence — steak. There’s even talk about going into the poultry and seafood arena.

The most familiar presentation is a burger, featuring a seared patty with a ‘bloody’ middle which is the final qualifier of how convincing Impossible can be. You’ll find plenty of burgers on the menus at participating restaurants, but there are also other ways of cooking with the ‘meat’. Here’s how it fits in with other cuisines.

Food & Drink
Impossible Foods has landed. Here’s where to grab a bite in Singapore

Let’s get the obvious choice out of the way first. You’ll find seven different burgers and one sandwich at participating restaurants with Impossible. CUT by Wolfgang Puck has even put its neck out on the line for this. But what business does ‘fake meat’ have with a one-Michelin-star steakhouse anyway?
Surprisingly, the steakhouse sees its fair share of vegetarians and non-beef diners. Executive chef Joshua Brown saw this as a way to still accommodate for these dietary restrictions. Brown admits that he was ‘very sceptical’ about Impossible initially until he tasted the ‘meat’ for the first time.

Apart from that, raw Impossible looks and cooks like ground beef. Its flavour is close to grass-fed beef and retains its weight and volume after cooking, Brown adds. The biggest challenge lies in the fact that it is minced.

“It is a minced product and there are limited applications I can use it for,” he explained. So they went for a remake of their popular Kobe sliders, replacing the beef for Impossible to showcase the texture, flavour all while keeping it ‘satisfying’.

CUT’s Impossible patties are done medium-well, sandwiched between mini brioche buns with slathers of jalapeno marmalade, aioli and ketchup. It carries a nice sear, bites well and is well-seasoned but leaves us wanting for a juicier patty.

Other restaurants do it medium-rare, showcasing the ‘meat’’s signature ‘bleeding’ quality. Park Bench Deli introduced the Impossible Patty Melt, phasing out the original version of the sandwich for the vegetarian patty. Slightly charred on the outside, the patty sees a ruby centre and retains the greasy nature of a burger.

Others go for something different from the usual patty. More controversially is Bread Street Kitchen’s Impossible take on Gordon Ramsay’s iconic beef Wellington. Ramsay has been vocal about his thoughts on vegetarians and going vegan on television, though it could be argued that it was also long before the arrival of Impossible Foods.

Chef Sabrina Stillhart’s got a thumbs-up from the restaurant group to go ahead with the new Wellington recipe and it is an interesting one to try. Instead of beef fillets, Stillhart goes for a roll-up of Impossible ‘meat’ that’s seared then layered of sauteed mushrooms, crepe and vegan puff pastry. It’s also served the same way as the beef Wellington, with mashed potatoes and red wine jus.

The Impossible Wellington is done medium-rare, boasting a seductive crimson middle. But it comes out a touch mushy, as a result of using minced ‘meat’ over a whole steak, and craves for some pate or slices of cured ham in between for that punch of saltiness.

Adrift by David Meyers goes for a similar preparation with an Impossible sausage roll, a casual bite featured on the bar menu. The mince is seasoned with fennel and nutmeg, moulded into a sausage and baked in a layer of puff pastry sprinkled with sesame seeds. It also suffers a case of moist, spongy ‘meat’. Though if one can excuse the texture, the sausage roll still makes for a decent snack with drinks.

Bring in the Asian spin

So far, we see fascinating things happening with Western dishes, but Asian cuisine is much more under-represented when it comes to cooking with ‘meat’. At Lau Pa Sat, Impossible Foods gave curious diners a glimpse of that cross-over.

Contemporary Chinese restaurant Empress presents an ambitious range of items such as gyozas, meatballs and even a Sichuan mapo tofu dish. The one thing we managed to try at the preview was the crispy pancake (or pan-fried sheng jian bao). There’s only a sparing stuffing of mince and chives, though it makes up for with fragrance.

When it comes to hawker food, we get a preview exclusive of an ambitious fried kway teow by Lai Heng Fried Kway Teow. It’s a passable dish (we are after all eating at touristy Lau Pa Sat) with bits of stir-fry mince clumped together with the noodles. We notice how well the protein absorbs seasonings like soya sauce and oyster sauce. It might sound a bit of a stretch, but if Impossible were afforded to hawker stalls it might not be too out of place.

Our verdict: Bring it on!

As expected, Impossible works wonders as a burger patty. There’s really no argument that can be made to avoid an Impossible burger if one does potentially come across one. The environmental benefits are an added boon as well. While not thoroughly explored now, introducing it to more local cuisine is something entirely feasible — provided the price is agreeable. In the meantime, we’re looking forward to a dining future with Impossible Foods.