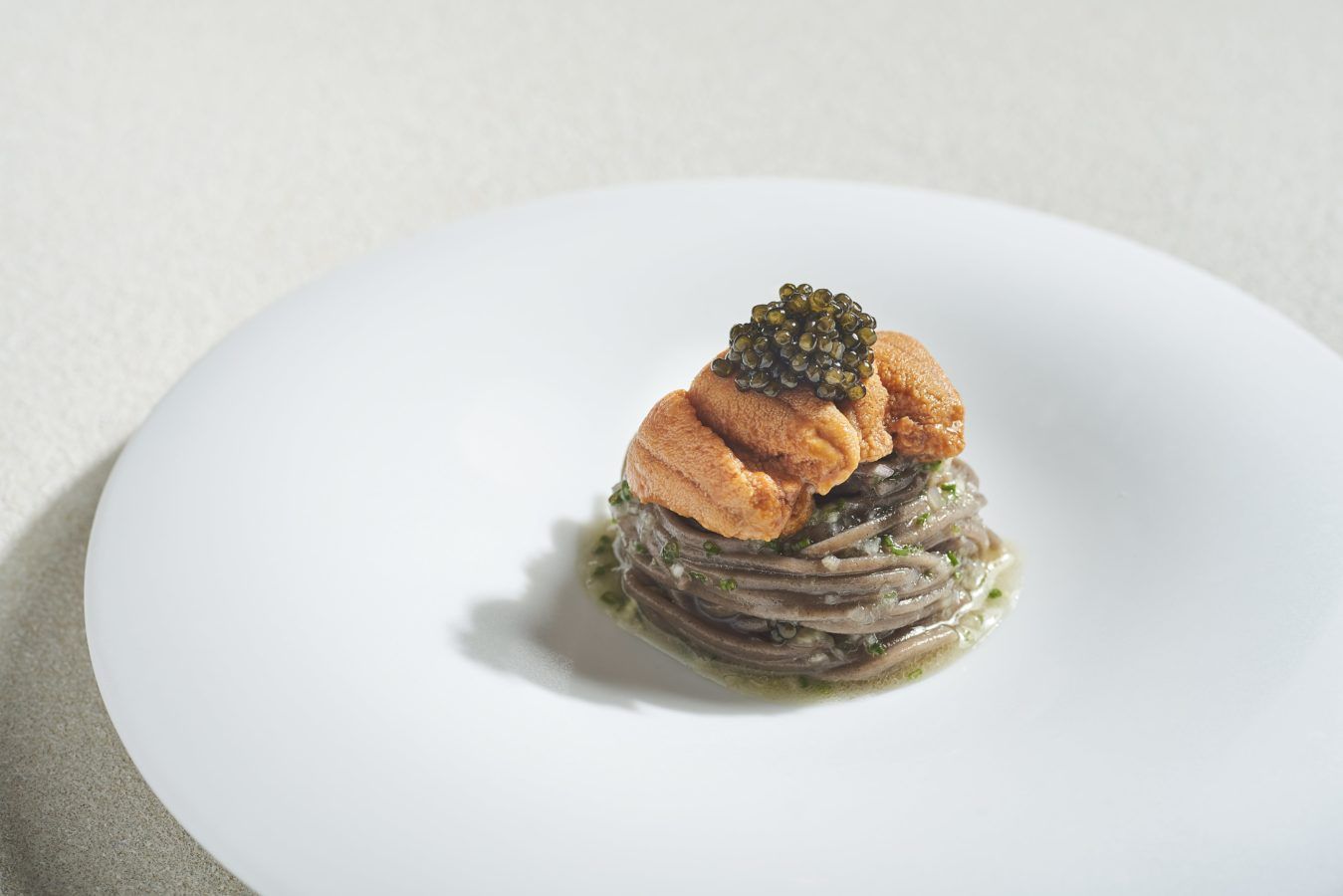 The first of mains at Nae:um is a humble mound of buckwheat noodles on the plate, except when we mean humble, we mean it’s dressed in truffle oil, crowned with bafun uni and Kaviari Oscietra caviar. It finds itself in the perfect intersection of Korean and Western cuisine, both luxurious and soul-warmingly familiar all at the same time. This is chef Louis Han’s contribution to Singapore’s surprisingly small contemporary Korean cuisine scene.

In a part of town that’s cloistered in Korean barbecue spots left, right and centre, Nae:um has placed itself in a culinary position that illustrates Korean cuisine’s evolution in Singapore. The multi-faceted fare, after all, isn’t just fiery-red stone bowls of stew or tender pieces of fried chicken served with beer. At Nae:um, you’ll find storied plates of ingredient-driven food modelled after the culinary diversity of the country’s capital, Seoul.

This is not chef Louis’ first foray in Singapore’s competitive dining scene. The Gangnam-born and raised chef first joined the opening team for Meta Restaurant in 2016, before assuming the role of Head Chef in the now-defunct Kimme in 2017. Almost four years and a pandemic later, his first restaurant, Nae:um came into fruition.

While diners find themselves with a singular course menu (add-ons are available) that’s usually associated with a fancy rendezvous, the Telok Ayer restaurant is fashioned to be anything but. Here, its open kitchen nestles itself just behind a slender pillar, and the 28-seater is dressed in woody birch hues and warm yellow lights that soften the atmosphere. Pleasantries are exchanged over a variety of seatings – banquette, table and counter — complete with a lattice of shelves that house large glass jars of house-fermented and pickled vegetables and fruits used in chef’s cooking.

After a clean start with the Nurungji Beef Tartare Bugak snack, the play on words for the Duck Galbi tart made us chuckle under our breath. Tteok-galbi, sometimes mistakenly pronounced as duck galbi by foreigners, refers to a side dish made with minced beef short rib patties that are grilled.

The mondegreen is taken quite literally here, featuring mouthwatering medallion of hand chopped duck leg meat and fat that’s been mixed with garlic, spring onions, ginger, a secret gochujang sauce. To add an additional layer to its name, a singular rice cake (tteok) is cradled in the centre of it all, while its surface glistens with glaze from the special sauce, complete with crater-like edges burnished from the binchotan.

Next, a waiter ferries over a knobbly white bowl, with what we believed to be summer encapsulated. This is the Mulhwae. While the name of the dish evokes memories of a sunset coloured bowl packed with spicy cold soup and raw fish best had in the warmer months, consider this version its grown-up cousin for the city dweller.

Beneath the assemblage of shiso cress, celery cress, fennel fronds, and edible flowers, you’ll discover dainty rolls of aged kampachi, nuruk-aged daikon and shaved cuttlefish. A pool of tangy yuzu chilli sauce adds a refreshing kick to the meat, finished with a drizzle of chive oil for good measure.

While many diners might revel in the dry-aged Challans duck, or the tantalising Nuruk Aged (a traditional Korean fermentation starter) Wagyu Striploin, we found ourselves falling for the unassuming Jjim, a duo of steamed red grouper that sits beside a charred roulade of zucchini, napa cabbage and steamed spanner crab.

The brilliance of on-point steaming shines through here: the locally-sourced fish is brined with a time-gruelling mixture of home-made konbu salt and konbu stock, before it’s dressed in an aromatic oil infused with leeks, spring onions, shallots, and ginger and steamed. The result? Sweet, flakey pieces that fall apart with a gentle caress from our knives.

Chef Louis operates with just as much skill at dessert. The Summer Bingsu, for instance, is a love song to the nation’s obsession with gut-friendly dishes. Think a scoop of fermented rice wine (also known as makgeolli) sorbet that sits on a bed of fermented red and white grape granita tossed with fermented watermelon, rock melon and peach. For added texture and taste, a scattering of creamy mascarpone snow settles by the side, ready to be spooned with the rest of the components.

Dinner comes to a close with a flurry of petits fours. The madeleine shaped fermented rice cake is all at once chewy and perfectly sweet, crafted from rice powder from Korea, sugar, unpasteurised makgeolli and yeast, before being baked to perfection and brûlée-torched with white sugar. Little needs to be said about the Yakgwa cookie, for the deep-fried ginger and cinnamon snack won us over in a single bite with flickers of sesame shining through. If this is chef Louis’ Episode 1, it’s safe to say we’ll be staying to the end of the season.

Korean restaurants Nae:um Contemporary Seoul cuisine
Jocelyn Tan
Senior Writer
Jocelyn Tan is a travel, food and design writer who's probably indulging in serial killer podcasts or reading one too many books on East Asian history. Constantly curious (read: chatty), she's the type who'll initiate conversations even with strangers in a shared taxi.
Travel Design Food
Sign up for our newsletters to have the latest stories delivered straight to your inbox every week.