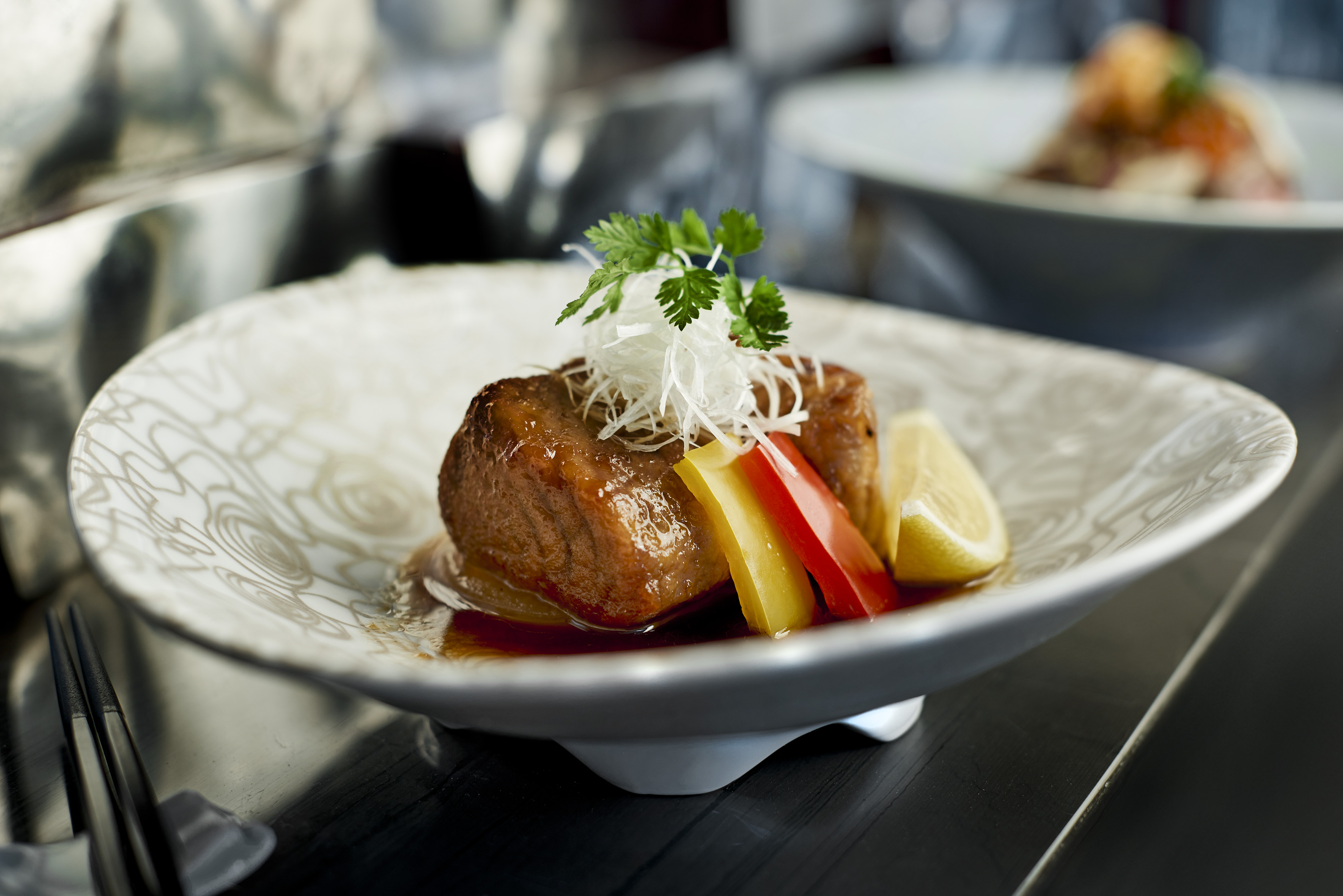 Late last year, Shangri-La Hotel Singapore closed its iconic Tower Wing for a major revamp of its rooms. The eight-month-long makeover finally concluded in May, and the hotel reopened its newly refurbished wing, along with its beautiful, refreshed lobby decorated with a basalt rock feature wall, and three new restaurants — one of which is Nami, a Japanese fine dining establishment.

Nami replaces the hotel’s now-defunct Japanese eatery, Nadaman, which opened in the 1980s and was known for its kaiseki sets. What sets the former apart is its location on the 24th floor — where the now-closed BLU Bar used to reside — and its extensive repertoire of omakase options, à la carte dishes, and lunch sets.

One of its walls is adorned with an eye-catching fixture of wood panels arranged to form a wave-like pattern, while a massive installation composed of metallic tiles takes centre stage on the wall of Nami’s sushi counter — so diners sitting there can be assured of an Insta-friendly backdrop for their #foodporn photos. Table seating is also available, and bigger groups can opt for the two private rooms that can accommodate six and 10 people. 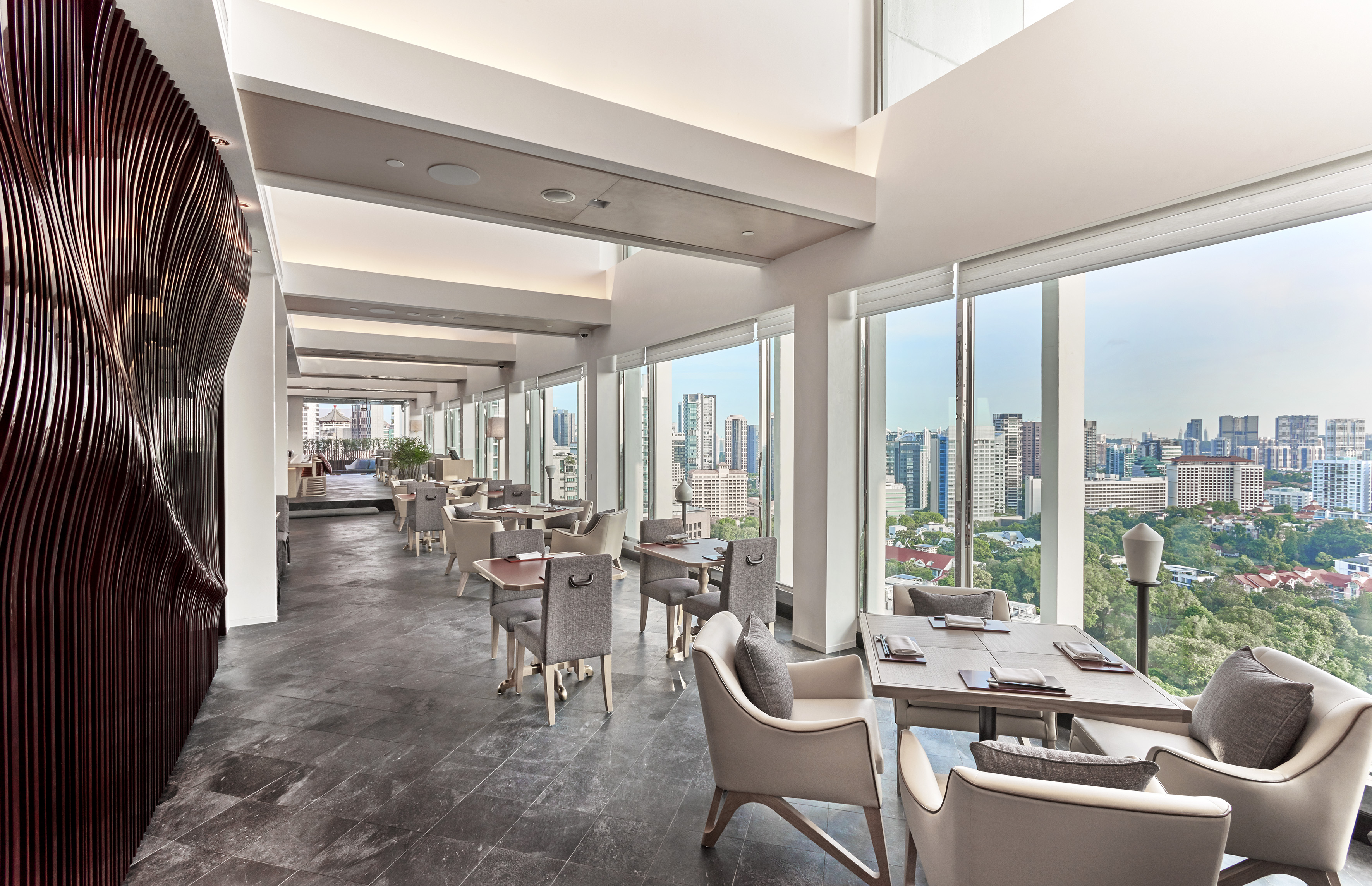 Compared to its dimly lit, cosier counterparts, the restaurant’s setting may seem a little business lounge-esque and corporate with its bright lights and beige hues. But this is mitigated by its large glass windows that allow for abundant sunlight to spill in during the day, creating a breezy vibe. At night, Nami has a slightly more romantic ambience, with its views of the city lights outside.

In charge of the kitchen is Yokohama-born head chef Shigeo Akiba, who has cooked for the likes of Japan’s Emperor Akihito and French actress Sophie Marceau,, as well as prepared the wedding banquet and crowning ceremony of Prince Akishinomiya and Princess Kiko.

At Nami, Akiba serves up traditional Japanese cuisine, with a focus on dashi. Much detail goes into the latter’s creation — it comprises a blend of kombu (kelp) obtained from the sea off northern Hokkaido, and katsuobushi (smoked bonito) from Kyushu. As a result, the dashi is imbued with a sweet, umami-laden flavour that easily elevates any dish. Many of the kitchen’s seasonal ingredients are specially flown in from Kyushu, Hokkaido, and Tokyo’s famed Tsukiji market.

Akiba’s cooking style veers towards the minimalistic, with an emphasis on showing off the natural flavours of his seasonal produce. Which means that most dishes on the menu are pretty straightforward and pared down, sans overly heavy sauces or seasonings.

We began our dinner with a dainty trio of appetisers (S$32): Sweet and delicious crab meat from Hokkaido, juicy Asari clam, and — our favourite — plump and creamy Hiroshima oyster marinated in fragrant sesame oil. These may change from time to time, based on the availability of ingredients.

Next up was Akiba’s winter melon veloute (S$15), which featured meaty chunks of prawn and scallop smothered in a thick and creamy soup. Yuzu pepper infused in the soup added a citrusy, slightly spicy aftertaste that helped balance out its richness.

No visit to a good Japanese restaurant is ever complete without sashimi, so we ordered a platter of seafood such as shima aji (striped horse mackerel), ika (squid), red snapper, scallop and prawn. Everything was fresh and sweet, and came accompanied with sides of Himalayan salt and grated wasabi.

Clean, uncomplicated flavours abound in Nami’s food. But chef Akiba made an exception for his pen shell clam dish (S$65), which featured a decadent mishmash of pan-fried clam meat, salmon ikura pearls and slivers of uni immersed in a cloying egg yolk-miso sauce. We can never say no to uni, but the whole combination got a tad heavy and overpowering after some time, with the various flavours jostling for dominance on the palate, but eventually being drowned out by the sauce.

We much preferred the restaurant’s signature Saga wagyu A4 sirloin (S$65), which was pan-fried and topped with ikura, shaved black truffle, and (again) uni. It was served with rice, pickles and red miso soup. The strips of beef were melt-in-the-mouth tender, and tasted divine when paired with the earthy truffles and silky, briny sea urchin. These ingredients were soaked in a light, aromatic truffle sauce that allowed for their individual flavours to shine.

Our dessert was a much less complex affair than the preceding savoury courses. We were offered slices of musk melon from Shizuoka, cherries from Yamagata, sugary sweet muscat from Nichii, and a single piece of mochi filled with crumbly cream cheese. Simple, but so satisfying.