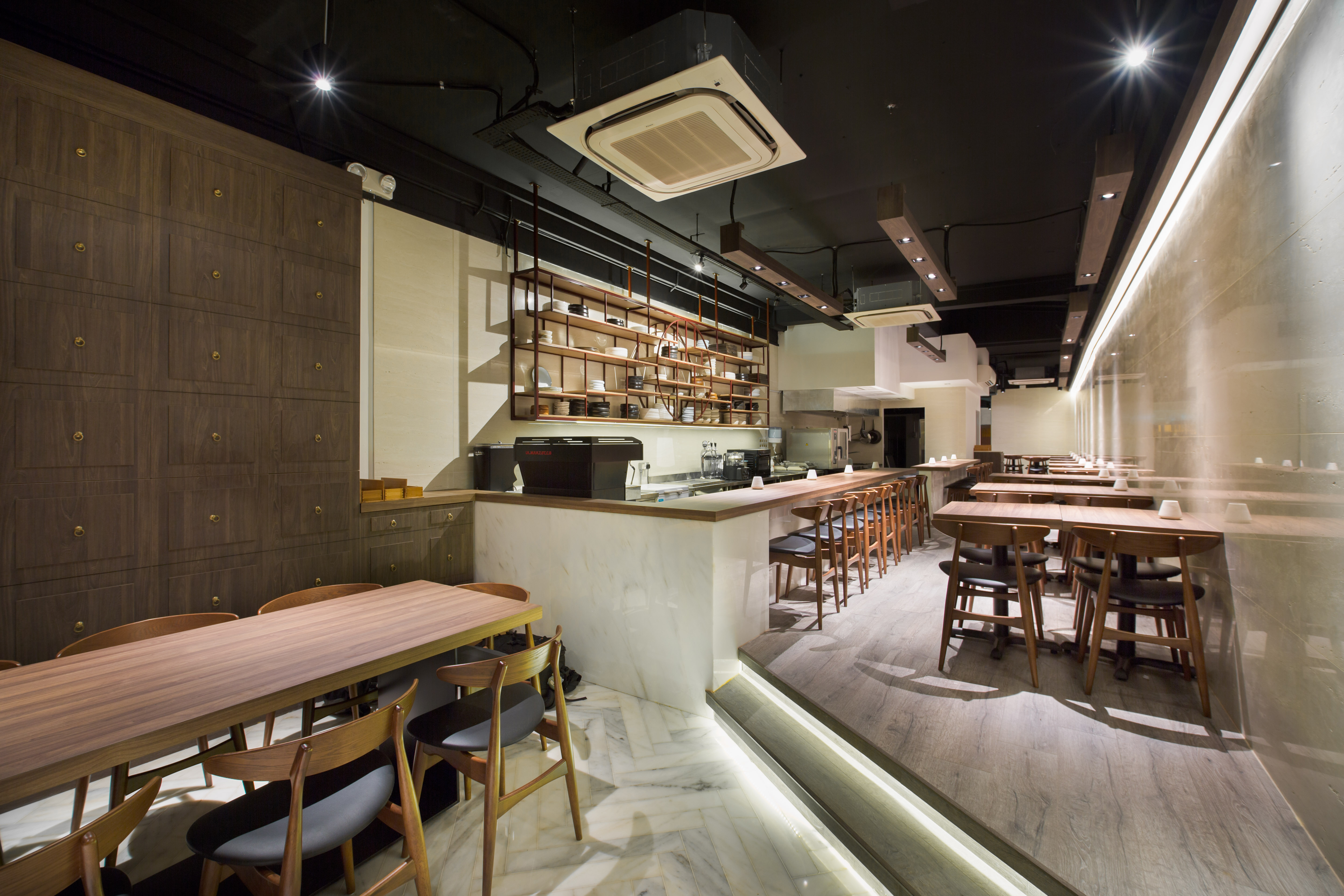 Named after the Latin abbreviation for ‘in the same source’, Restaurant Ibid draws inspiration from various aspects of Woo’s life: His childhood growing up in Singapore, his life experiences, his knowledge of Asian and Western culinary techniques and flavours, and the memories he associates with food. He dubs his cuisine “Nanyang-style, contemporary Chinese”, in a reference to his ethnic roots.

It may sound like a rather clumsy mix of influences, but look past the convoluted backstory and you’ll notice one recurring theme throughout the restaurant’s menu: Many of its offerings feature a common Chinese ingredient, such as Angelica root, or are centred on the flavour profiles of classic dishes like tea eggs and yu sheng. Woo deconstructs and reimagines these elements, conjuring up innovative concoctions that look completely different.

Located in a shophouse along North Canal Road, Restaurant Ibid sits in the spot once occupied by the now-defunct bar The Belljar. Its interiors are designed in line with its Chinoiserie sensibilities: A large wooden feature wall (which doubles up as storage space) composed of traditional Chinese medicine drawers takes pride of place next to the entrance, while a metal and wood hanging shelf modelled after a Chinese latticed window frame forms the backdrop for its open kitchen.

The whole place is decked out in a palette of calming grey, off-white and celadon (a green-grey shade) hues, and decorated with wood accents. It seats a maximum of 54 diners, inclusive of 14 at its bar.

Our meal kicked off with two snacks: Spring onion shao bing, and escargot skewers. The shao bing, a type of flatbread commonly found in northern Chinese cuisine, was a unanimous favourite. Its chewy yeasted dough was stuffed with a scrumptious medley of spring onions, mozzarella cheese, black pepper and sesame oil, before being pan-fried till its exterior was golden-brown and slightly crisp. It came with an addictive side of yeasted butter (created by combining soft butter with cooked yeast paste), which was particularly aromatic thanks to its topping of laksa oil and leaves.

The escargot skewers were a showcase of Woo’s fastidiousness. The tiny snails were coated with a spicy chilli bean paste before being grilled over charcoal and rolled in bawang goreng (caramelised shallots). Finally, they were covered in betel leaves and roasted over charcoal again for a charred, smokey crust. The fried shallots added a pleasing crunch to the whole mix.

Woo’s rendition of a tea egg came in a rather unexpected form. Instead of the usual whole hardboiled egg soaking in a tea and spice-infused soup, his version featured a single egg yolk sitting in a broth the colour of soy sauce and framed by petal-like shiitake mushrooms. Think of it as a deconstructed tea egg, amped up with Western culinary influences.

The egg yolk is sous vide to achieve a jam-like consistency, and set on a bed of blended white onions and sour cream — which resembles an egg white at first glance. Shiitake mushrooms and crunchy gingko nuts, which have been fried in brown butter and salt, lend textural contrast. As for the broth, Woo makes it with aged mandarin peels, Pu-Er tea leaves, and kelp, and adds in crystal rock sugar for a subtle tinge of sweetness. The result is a light but delicious broth with undertones of bitterness and sweetness.

We also loved the white radish porridge, which was inspired by century egg porridge and tasted of homemade goodness. Resembling a creamy paste rather than congee, it’s composed of white radish trimmings (boiled till tender and cooked with overnight rice, soy milk, butter and salt for a fluffy consistency), crunchy battered bamboo shoots, dehydrated century egg whites, and — for pops of umami — bits of chye poh (preserved radish).

For mains, go for the beef short rib, an adapted version of a dish Woo created on MasterChef Asia back in 2015. The meat is sous vide for 48 hours till it’s fork-tender and paired with black fungus that’s pickled and charred (for a chewy texture) as well as boiled Russet potato puree melded with black garlic and butter. It’s drenched in a sauce that’s made from roasted chicken bones and caramelised onions and infused with Angelica root — a herb that’s ubiquitous in Chinese cuisine — for a slight bitterness.

Apart from that complex amalgamation of ingredients, the beef is also bedecked with crunchy slices of Chinese pear, which help cut the richness of the meat’s flavours.

If your meal seems incomplete without carbs, order the lotus leaf rice — which is often a staple at wedding dinners and dim sum restaurants (if you’re also reminded of lo mai gai, or steamed glutinous rice with chicken). Woo’s riff on this dish features steamed short grain and glutinous rice mingled with dried shiitake mushrooms that have been fried with garlic, butter and soy sauce. Shavings of preserved liver sausage are embedded within, and seared foie gras is laid on top of the rice for a luxurious touch.

After that decadent main, we opted for a lighter, dairy-free dessert of soy milk and tofu ice cream, which carried a gelato-like texture and was complemented with tufts of sesame cake. What really stole the show in this confection was its pepper meringue, which added dimension to the otherwise delicate flavour profile with its savoury notes. Woo uses white pepper sourced from Sarawak, his mother’s hometown.

There’s something particularly heartfelt and earnest about the food at Restaurant Ibid. Perhaps it’s the way Woo has taken it upon himself to reinvent and challenge our expectations of how certain Chinese dishes and ingredients should be prepared and presented. Every dish that reached our table was tastefully executed, thanks to his penchant for paying attention to even the slightest details.

It’s still early days yet, but based on what we’ve seen and tasted at Restaurant Ibid, it looks like Woo may have another victory on his hands.