It isn’t everyday Singapore has a restaurant opening that’s more refreshing than the last 12 months of new entrants.

Enter Thevar, a contemporary Indian establishment taking the space of Michelin-starred Meta. This is no small feat for in the last few months, riveting new concepts like Nordic import Zen and contemporary kaiseki outfit Esora have raised their shutters, enthralling diners with beautiful spaces and beautiful food. 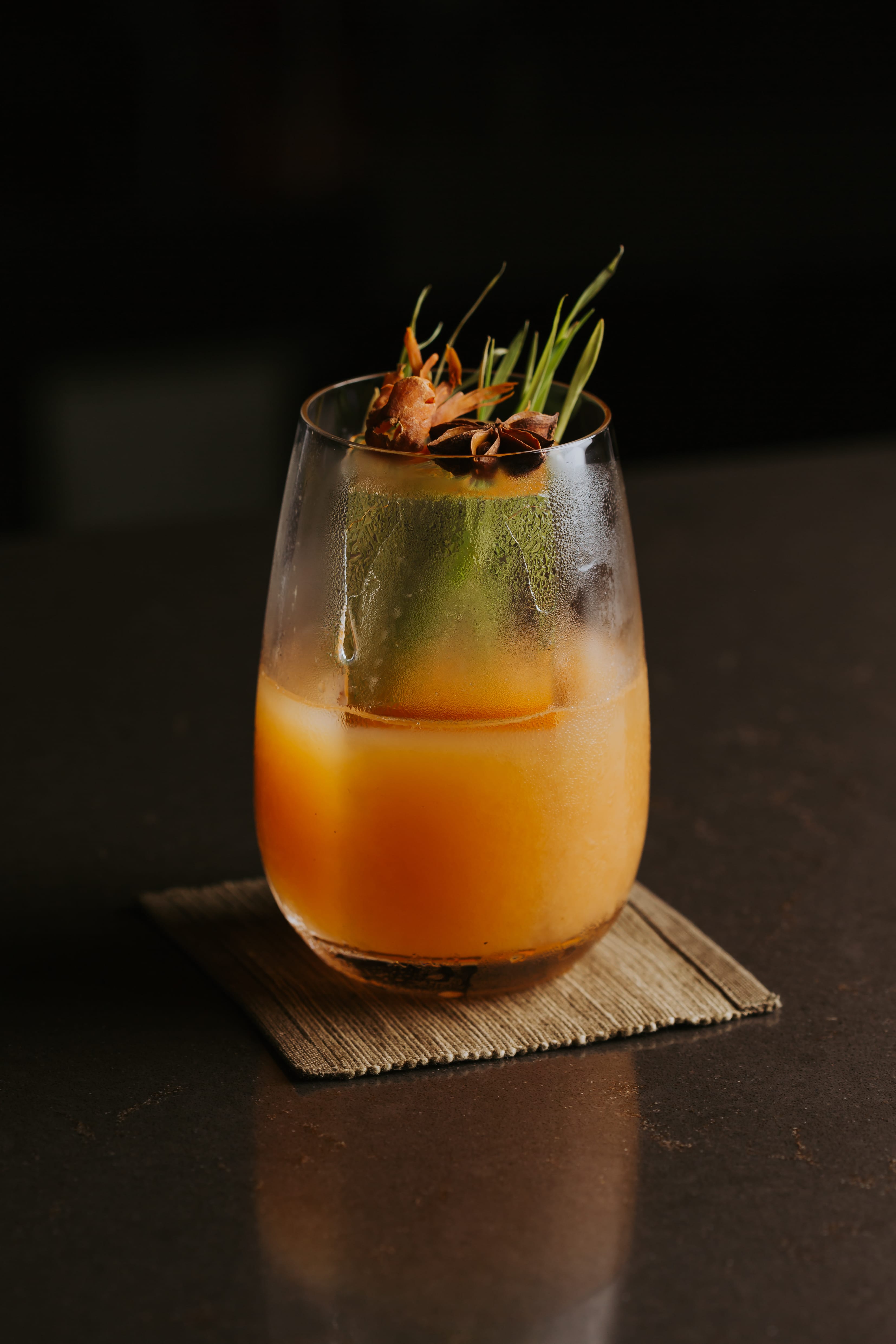 Many of Thevar's cocktails are laced with spices

Yet Thevar trumps as chef and co-owner Manogren Thevar (or just chef Mano as he’s known) has pulled a rabbit out of his hat: serving up Southeast Asian renditions of South Indian food elevated for the cocktail-sipping, truffle-sniffing dining classes. Whether that’s by design or not, the style of cooking is one of Singapore’s (and Malaysia’s) great gastronomic traditions; one that has unfortunately been shunted out of the spotlight by tourist cliches like chilli crab and satay.

This is after all, a cuisine with thousands of years of history, with just as many techniques, flavour combinations and ingredients. Bundle this into a neat package and hurl it to Southeast Asia — specifically Penang where chef Mano is from and you get the perfect maelstrom.

Ambience
This unique culinary identity finds a hip expression on Keong Saik Road, though not much has changed since chef Sun Kim’s (who is also the co-owner) brainchild moved up a few doors.

It’s still a counter seating restaurant flanked by a few table seats facing a shiny obsidian black wall. What’s new though is a grill and the unmistakable glowing red mouth of a tandoor oven from which fabulous food emerge.

Food
Virtually all the dishes we tried were spectacular in some way or form. Could Meta’s Michelin miracles be replicated by chef Mano? For a start, the small team has managed to fire off an impressive volley of techniques — enough for an enquiring diner to be educated on the battery of South Indian cuisine.

These are divided on a menu that splits the small and big plates into their own categories. As we’ve found out, small plates don’t mean small flavours.

Take for instance the dosai wrapped around mackerel chunks with tomato chutney. Here, dosai batter made of rice flour and ground pulses is fermented for 15 hours, lending it that trademark sour taste we’ve all come to know and love. The slabs of pearly white mackerel are the perfect vehicle for the crimson tomato chutney, punctuated by a starburst of fresh coriander for garnish.

The crispy pork jowl which comes slotted in betel leaf and topped with a coconut-sambal aioli is another stunner. This deceptively simple assembly is the amalgamation of chef Mano’s background presented in a mouthwatering morsel: it’s a Keralan-inspired dish with a touch of north Malaysia.

Here, the fatty cut of pork is first slow-cooked in a sambar spice blend for three hours then deep fried until its skin is shatteringly crisp. The coconut-sambal aioli gives the dish a spicy lift and the betel nut leaf — sourced from Thailand for its gentler flavour rather than India which would otherwise be too strong — gives a peppery kick.

Once you’ve polished off your small plates, dive into the offerings of the tandoor oven. Nowhere is the team’s ability to harness its extreme heat seen more than in a North Indian staple: Naan — served alongside dishes like butter mushroom.

Those partial for thick fluffy slabs of bread will be disappointed for the rendition here is light as air. Think of thin skins used to wrap peking duck rather than the stodgy heavy bread base of a cheap pizza joint. Bring a piece close to you and inhale, and you’ll smell the familiar bosom of cream and yoghurt folded into the dough. It’s a great base to dip into the butter mushroom — a soulful bowl of mild tanginess and the earthy umami of enoki and oyster mushrooms laced with shreds of paneer.

The grilled river prawn lathered with what’s known on the menu as “Indian XO” served with roti prata is another standout. While the prawn is perfectly cooked to a meaty succulence and the touch of Indian spices on traditional Chinese XO sauce was inspired, the hero here is the roti. Yes the giant crustacean sitting on our plate is the highlight but it is this daily breakfast staple — the very same one that we see being kneaded, pounded and shaped at hawker stalls is harder to get right (sticking prawn over a flame for a number of minutes is something even beginner cooks can do).

It’s fragrant, not at all greasy and most importantly, crispy. This is only possible if it’s done ala minute. The secret, says chef Mano, is to prepare the roti during prep, cook it till it’s about 80 percent done and then fire it up again on the griddle when an order comes in.

“The secret is to prepare the roti during prep, cook it till it’s about 80 percent done and then fire it up again on the griddle when an order comes in.”
Chef Mano

If you’re still hungry, go for the motherlode on the menu: the berry pulau, which is a biryani by any other name. The long grains of basmati rice — folded with garam masala and scented with the perfume of Southeast Asian herbs like lemongrass and pandan — offer flavour in every bite. The bowl comes spiked with the sourness of dried cranberries while pistachios lent its distinct nuttiness. Have this with the pork ribs which are sweet and sticky thanks the shiny marinade made of medjool dates brought to life by a homemade spice blend of cumin, mustard seeds, cardamom and cloves just to name a few.

At the heart of such quality cooking, and indeed, any good Indian restaurant worth its salt is that chef Mano makes his own spice blends — a minimum of eight different types in fact. This beats buying them commercially as it lets him control the nuances of every dish from the crispy pork jowl to the pork ribs.

The thought of this alone, is enough to have us coming back for more.

Verdict
Multiple visits by our dining team at different junctures of the restaurant’s opening phase yielded a coherent response: The food is fantastic and there’s immense potential here. Thevar has something the Restaurant Zens and Esoras of this country don’t have: relevance to the nation’s cultural fabric.

Chef Mano has deftly wielded, tamed and brandished his gastronomic heritage like a scimitar and we can’t wait to see more. Go not just because the food is excellent, but because it’s about time we throw our weight behind the flavours of home.

$80++ per person without cocktails

Low except for the music