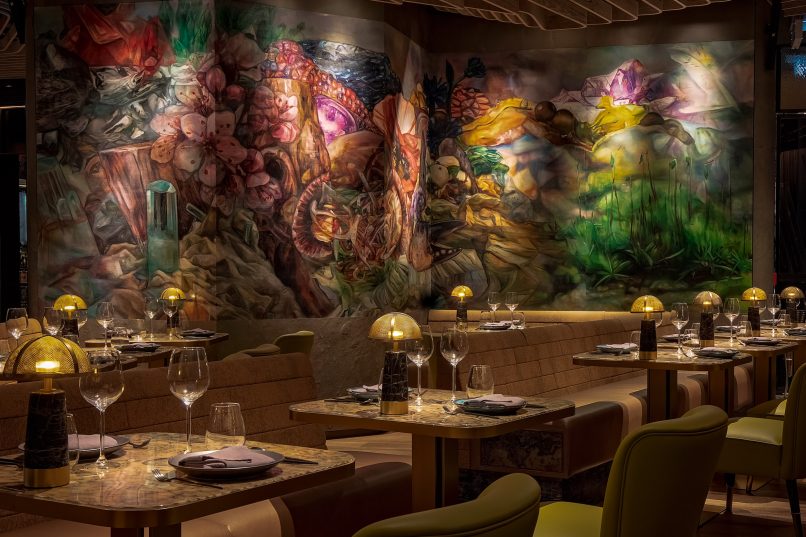 Even in a year with a spate of high-profile celebrity chef-helmed openings  —  including Gordon Ramsay’s Maze Grill and Thai food master David Thompson‘s Aaharn — Ichu Peru, from Chef’s Table star Virgilio Martinez, may just be the most highly anticipated yet. In case you didn’t already know, the influential chef’s flagship restaurant, Central Restaurante in Lima, Peru, (which Martinez co-runs with his wife Pía León), is consistently ranked as one of the top restaurants in the world by World’s 50 Best Restaurants.

Amidst relocating Central to a larger space earlier this year and opening another groundbreaking restaurant near the terraced Inca ruins of Moray — Mil Centro, which offers a mind-blowing experience where the menu is based entirely off what can be grown in the surrounding Andean landscape, 3500 metres above sea level — Martinez has carved out time to debut his first restaurant in Asia right here in Hong Kong, marking a significant milestone in the evolution of our city’s diverse food scene, as Peruvian cuisine continues to have its big moment on the global culinary stage.

Located inside H Queen’s, Ichu Peru aims to create a more relaxed and convivial experience compared to that of Central or Mil Centro by replacing the long degustation with an approachable à la carte menu inspired by the myriad cevicherias scattered across the streets of Lima. The restaurant is backed by Dubai-based Bulldozer Group (who brought us the now-shuttered Seafood Room), and it’s no surprise that the glitzy hospitality group has tapped leading Hong Kong restaurant designer Joyce Wang to bring the space to life.

The queen of F&B interiors has splashed her signature stylistic touches all over the space, once again succeeding in reflecting the heart of the cuisine in a thought-provoking and beautiful design — this time inspired by the majestic beauty of Peru, from the rugged Andes to wind-swept coastal plains and the vast expanse of grasslands that sit in between. Natural materials such as stone and slate are used throughout, punctuated by Amazonian-inspired artwork and bright splashes of colour.

Martinez’s cuisine is all about exploring the varying elevations and topography of his home country; Ichu Peru reflects that same sense of movement and natural terrain, with distinct sections carved from the country’s landscape, from the open kitchen fronted by a suspended indoor tree evoking the Peruvian jungle, to private rooms with turquoise slates mounted on a granite wall suggesting the meeting of land and sea. Richly textured materials and rough finishes are seen throughout, while low sofas and dim lighting add a sense of mystique that lends itself well to the progressive plating and gives the restaurant a slightly subterranean feel. Past the open kitchen is an outdoor terrace which can accommodate an additional 85 guests, with views overlooking Pottinger and Stanley Streets.

With a name derived from a plant found in the Peruvian Andes, Ichu Peru reflects its Executive Chef’s main mission — to chart a path across Peru’s vast landscape, drawing attention to its deep culinary traditions and the staggering biodiversity of its ecosystems. Leading the kitchen in Hong Kong is Korean-born chef Sang Jeong, Martínez’s protégé who’s relocated to Hong Kong after spending three years in the Central kitchen.

While dining at Central is akin to browsing the vast encyclopedia of Peru’s indigenous ingredients (only tasting menus are available, clocking in at 17 dishes each), Ichu Peru feels an abbreviated version — a condensed à la carte offering with 3–5 dishes under each section of the menu: Tiradito (Raw), Ceviche, Starters, Verduras (salads and vegetables), Tierra (meats) and Mar (fish and seafood), and Side Dishes. In between, the pages are annotated with diagrams and various explanations detailing the indigenous plants, roots and origins of the ingredients.

Our dinner kicks off with the Pez Limon (HK$180) and the Tartar de Lomo Con Maiz (HK$140). The former features delicate chunks of fresh yellowtail languishing in a pool of leche de tigre, hidden under a precarious stack of twisted sweet potato strips. A staple of Peruvian cuisine, the leche de tigre here packs a wallop of flavour, delivering a throat-punching intensity of citrus and chillies, onions, jalapeños and mouth-puckering yuzu. The large-variety Peruvian corn known as choclo adds a necessary starchiness to offset the sour and spicy flavours of the dish — a formidable opener to kick off the meal.

The bright clarity of flavours continues in our next dish of beef tenderloin tartare. Cut into larger chunks, the fresh beef is mixed with a carob molasses, a thickened syrup drawn from the algarrobo tree in Peru. A bright ring of yellow purée gives the plate a sunny disposition, serving to not only pretty up a traditionally dull-looking dish, but also saluting another one of Peru’s central ingredients. Here, fresh maíz is blended into a brilliantly silky purée, drawing fire from an undercurrent of aji amarillo chillies. Like the ceviche, the tartare is completed by crispy decorative elements — this time wafer-thin sheets of dried corn staked into the beef at odd geometric angles.

Though our taste buds are electrified, we’re starting to realise that portions are smaller than expected — and thus opt for the Arroz Uni (HK$190) as a quick fix to sate our appetites. Uni rice is ubiquitous around town these days, and while Ichu Peru’s packs more briny, sea urchin flavour into each individual grain than many other haphazard executions around town, accentuated by the bright orange tongues which dot the surface — we find the dish to be a little one-dimensional, and fail to detect the aji chillies that are meant to thrust the dish into Peruvian territory.

The sea bass (or Pez Amazonia) is one of the star dishes on the menu at Ichu and all eyes are immediately drawn to the colourful presentation as the dish hits the table. Drawing fragrance and smoke from ‘ashed’ banana leaves, the baked fish is tender and succulent throughout — the mild-flavoured flesh bolstered by a vibrant tamarillo sauce infused with rocoto peppers, lime and coriander. A rainbow assortment of toppings are reminiscent of the ceviche: diced red onion and tomato, sweet corn and generous splashes of lime. The size of the fish leaves a little to be desired, however: For HK$420, it’s meant to feed two, but could easily be polished off by one modestly hungry diner.

Finally, we cap off our meal with the Coliflor Asada (HK$100), a whole cauliflower head roasted and heavily charred until every bit of outer floret has been singed to an attractive crispness. The cauliflower cuts through like butter and is plopped down on a ring of Peruvian sheep’s milk cheese and Andean mint purée; the former rather gummy, the latter imbued with the vivacity of herbs freshly plucked from the garden.

Desserts offer eight variations to choose from — each featuring an intriguing mix of ingredients from goat cheese with quinoa and raspberry to aji, pimiento and dried cacao. While the Semilla de Cacao is the most eye-catching dessert of the bunch, our server advises us not to order it (it’s still under experimentation, she says), and instead recommends the signature Tres Leches (HK$90), a decadent combination of sponge bread drenched in sweet condensed milk, offset by a tart and refreshing carrot sorbet and crisp meringue shards.

Cocktails are one of the highlights of the menu, and should be consumed freely throughout the meal. They play with the same pool of indigenous, idiosyncratic ingredients as the food, and are exceptionally well balanced, from the Amazonia Vida (HK$120), a vegetal tonic which draws its herbaceous flavour and bright green colour from chlorophyll mixed with Genever gin and native roots; to the El Milagro (HK$150), a dessert-like mix of mezcal, nutty orgeat, amontillado (sherry wine) and purple popcorn. The signature Ichu Pisco Sour (HK$120) is another winner, Peru’s national cocktail elevated with the potent flavours of saffron and eucalyptus.

Peruvian cuisine still lies very much on the fringe of mainstream dining — which makes the full 3-hour tasting at Martinez’s other restaurants as much an educational and enlightening experience as it is a profoundly pleasurable one. While the chef’s establishments in Peru operate as harmonious multi-part symphonies, traipsing through the highs and lows of various elevations and terrains while showcasing the full scope of the Peruvian landscape with intricate and detailed compositions — the menu at Ichu Peru, in comparison, can feel disparate, with indigenous ingredients making cameo appearances without due pause for explanation or study.

The format is slightly at odds: On one hand, dishes aren’t quite large enough to share with a group; on the other, dining for two doesn’t allow you to get a full picture of the groundbreaking creativity found in Martinez’ brilliant vein of cooking and the sheer diversity of Peru’s produce (the menu at Central features something like 230 ingredients, while Ichu Peru must largely source from local Hong Kong produce). In fact, seeing a table of two diners pick over a single charred avocado half (the Palta Quemada, HK$100) is a bit dismal — a dish that would undoubtedly have its rightful place within a much longer tasting menu presented with more focus and dedication.

Menu technicalities aside, however, most everything we tried at Ichu Peru was well executed and fundamentally delicious. And while the restaurant may not fully exploit Martinez’ genius, it still supplies Hong Kong with one of its most successful and sophisticated materialisations of Peruvian cuisine yet, in an accessible and more affordable medium (when you consider the price of the US$130 tasting menu at Central, much less the cost of a flight to South America) — which was, after all, the chef’s primary mission from the get-go. While the food might not reach the very peaks of the Andes, there are plenty of highs to sustain several trips to Ichu Peru to start unravelling the complexities of one of the world’s great and, until very recently, vastly underrated cuisines.

Virgilio Martinez Peruvian restaurants H Queen's ichu peru ichu best peruvian restaurants peruvian eats
Leslie Yeh
Editor in Chief
Having worked as a lifestyle editor for almost 10 years, Leslie is thrilled to be writing about the topic she loves most: wining and dining. When she's not out pounding the pavement for the latest new restaurant opening or tracking food trends, Leslie can be found at home whipping up a plate of rigatoni vodka and binge-watching Netflix with a glass of Sauvignon Blanc in hand.
Dining Restaurants Food Trends Drinks Travel