Sportscar enthusiasts and lovers of open top motoring will want to check out the new Mercedes-AMG SL up close. The newest addition of the iconic motor makes a return to its roots with a classic soft top and sporty character.

Those familiar with the heritage of the Mercedes sports car will recognise the significance of the SL plate. First revealed to the world almost 70 years car, the model’s launch in Stuttgart immediately solidified its legendary status. 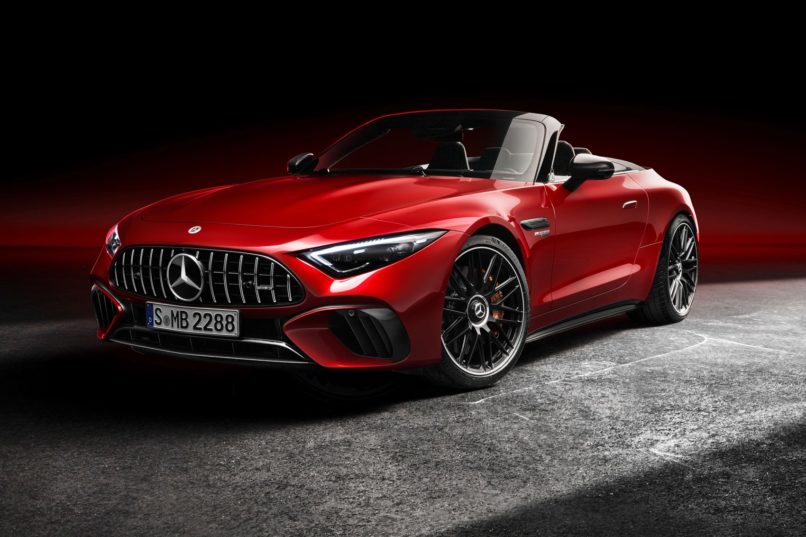 It was a visionary approach by the Mercedes-Benz brand to produce a road-going racing sports car. More importantly it served as a blueprint for the German automaker to expand its potential through motor racing successes. The SL would serve to take this mission to the next level.

Shortly after its début in 1952, the 300 SL (internal designation W 194) reaped success after success on the racetracks of the world. In its first year, it achieved, among other things, a spectacular one-two victory in the legendary 24 Hours of Le Mans and even took the first four places in the Nürburgring Grand Jubilee Prize for sports cars.

Its legendary status continued in 1954 with the 300 SL production sports car (W 198), which is called the “Gullwing” because of its unusual doors. In 1999, a jury of motoring journalists voted it the “Sports Car of the Century”.

Other highlights of the model history include the “Pagoda” (W 113, 1963-1971), the evergreen R 107 (1971-1989), which was built for 18 years, and its successor, the R 129, which is considered an automotive sculpture because of its striking wedge shape. The abbreviation “SL” to this day thus stands for one of the few genuine automotive icons in the world.

A new era for the Mercedes-AMG SL 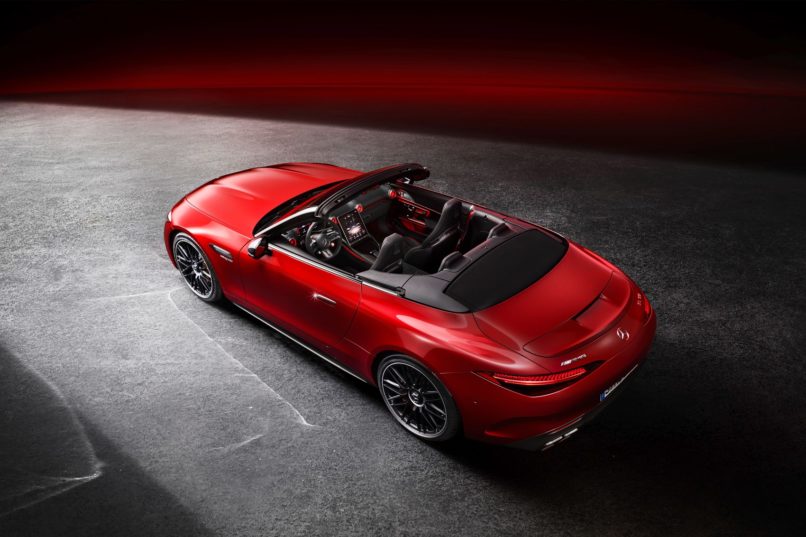 In the decades-long development history from full-blooded racing car to open-top luxury sports car, the new Mercedes-AMG SL now sets another milestone. It combines the sportiness of the original SL with the unique luxury and technological excellence that characterise modern Mercedes models.

The luxurious roadster’s 2+2 seat configuration is particularly suitable for everyday use and puts its power down on the road with all-wheel drive for the first time. High-tech components such as the AMG Active Ride Control suspension with active anti-roll stabilisation, rear-axle steering, the optionally available AMG ceramic high-performance composite brake system and the standard-fit Digital Light with projection function sharpen the sporty profile. 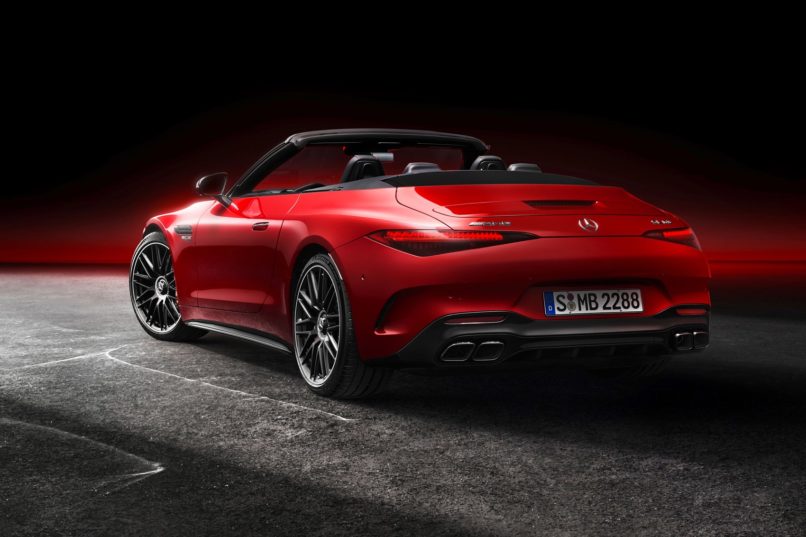 In combination with the AMG 4.0-litre V8 biturbo engine, this results in a driving experience of the highest order. As a consistent Performance Luxury model, Mercedes-AMG in Affalterbach has developed the SL completely independently. Two models with AMG V8 engines will kick off the market launch.

Mercedes is also working on a performance hybrid, which will join the line-up at a later date. Currently in development, the AMG E PERFORMANCE drive strategy is based on the guiding principle of offering an electrified powertrain that further enhances driving dynamics while also being highly efficient. 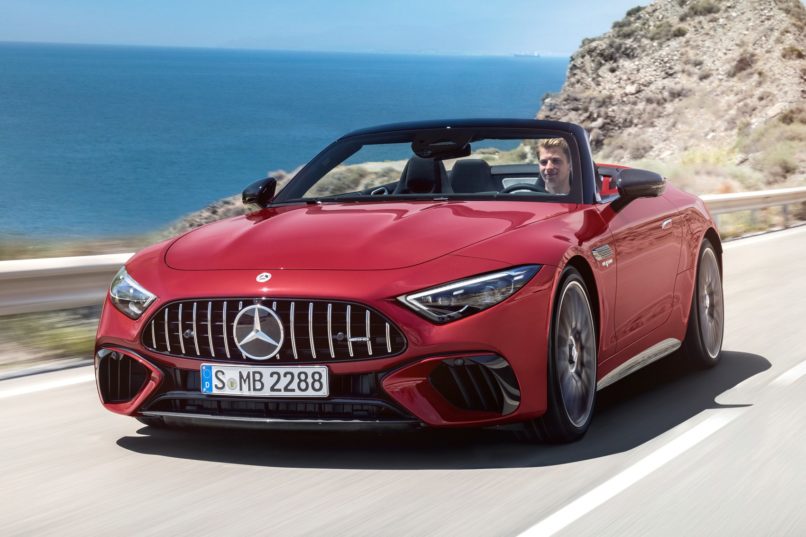 The new Mercedes-AMG SL continues to exemplify the model’s sporty pedigree. Characteristic features of the body design are the long wheelbase, the short overhangs, and long bonnet. The passenger compartment is also set back with a strongly raked windscreen and powerful rear end, typical of SL proportions.

Mercedes-AMG has built the 2021 SL on a completely new 2+2-seater vehicle architecture developed in-house. The chassis is designed as a lightweight composite aluminium structure and consists of an aluminium space frame with a self-supporting structure. Its design guarantees maximum rigidity and is thus the perfect basis for precise driving dynamics, high comfort, and sporty body proportions. 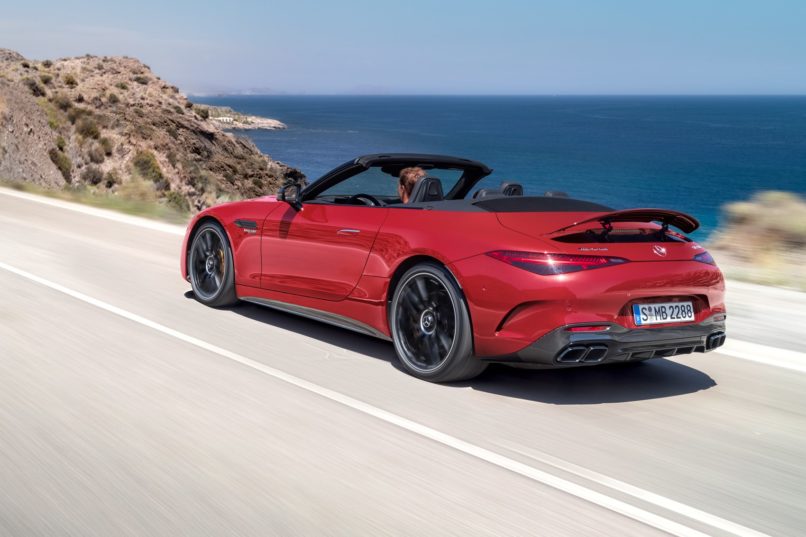 Paired with an AMG SPEEDSHIFT MCT 9G transmission, the models feature six AMG Dynamic Select driving modes. For the first time in its almost 70-year history, the SL is available with a drive system acting on all four wheels. The two V8 models are equipped with AMG Performance 4MATIC+ all-wheel drive technology as standard.

Inside, the interior of the new Mercedes-AMG SL transforms the tradition of the first 300 SL Roadster into the modern era. Its cockpit design, right down to the adjustable central display in the centre console, is focused on the driver.

The minimalist interior of the 300 SL Roadster, equipped with high-quality materials, inspired the designers in the interior design of the new model. It is based on Mercedes’ concept of “hyperanalogue”, which combines analogue geometry and the digital world. 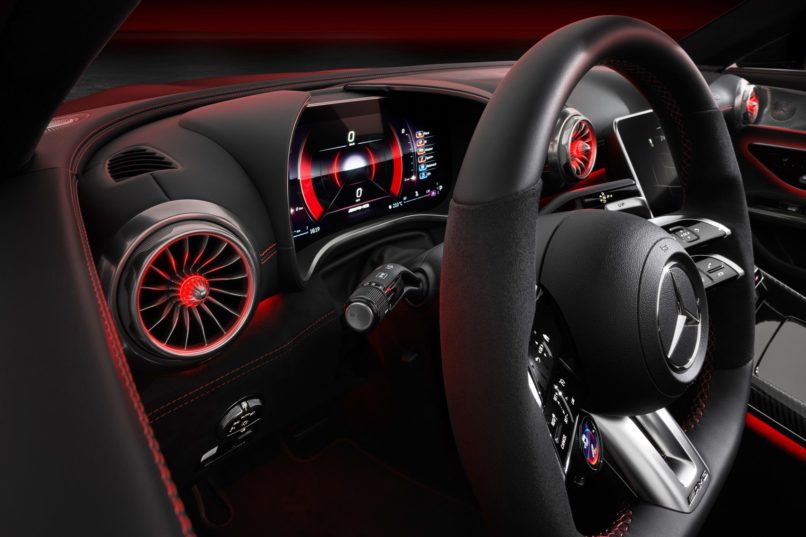 Key to this is the latest generation MBUX (Mercedes-Benz User Experience). Intuitive to operate and capable of learning, it offers numerous functional contents and the operating structure of the second-generation MBUX system.

The sportier positioning of the new SL also suggested the decision for an electric soft top instead of the previous metal vario roof. Offering 21-kilograms reduction in weight along with the resulting lower centre of gravity have a positive effect on driving dynamics and handling.

Opening and closing takes only about 15 seconds and is possible up to a speed of 60 kmh. The soft top is operated using the switch panel in the centre console or the multimedia touchscreen, on which an animation shows how the process is progressing.

This article was first published by Augustman Singapore.