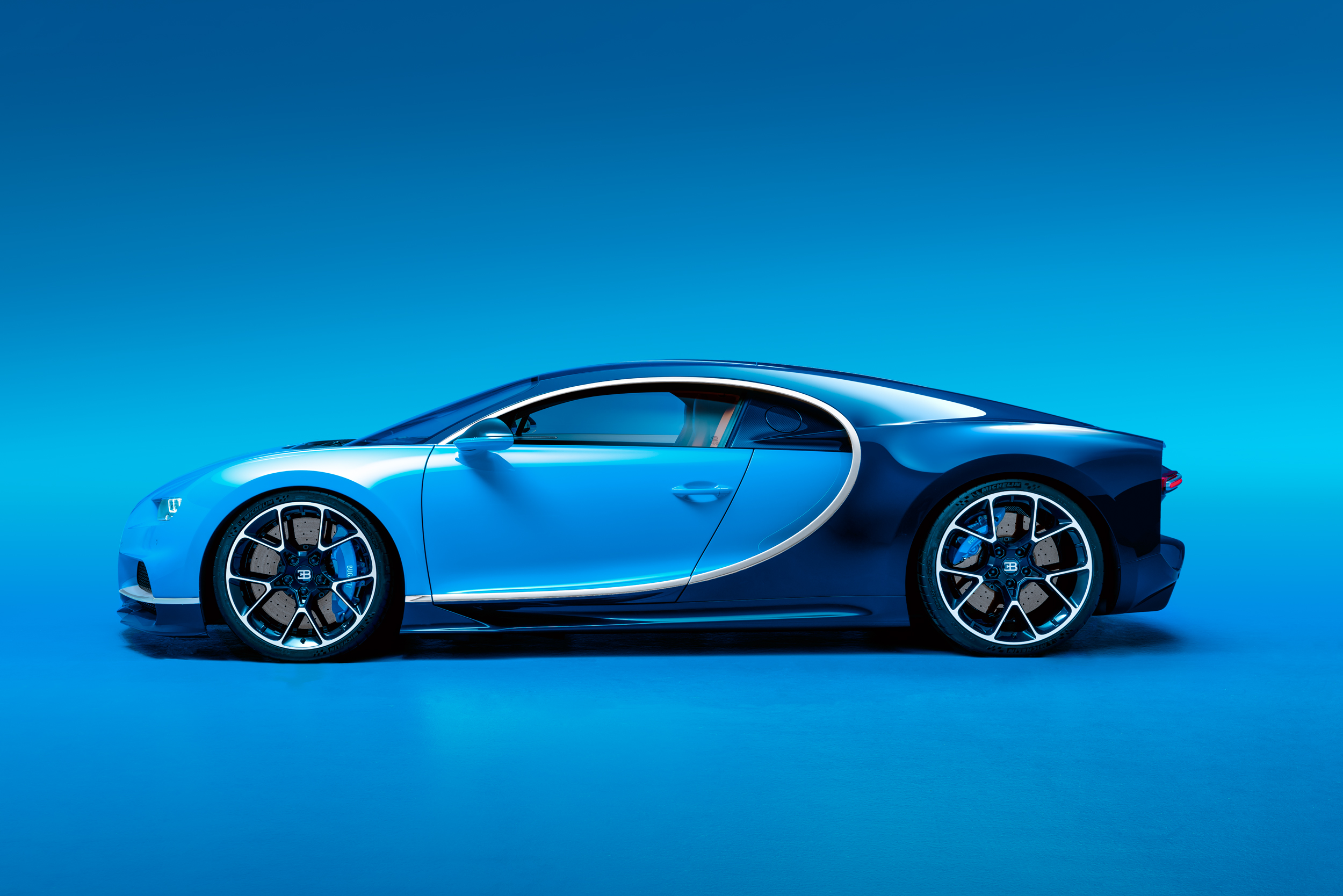 5 ways the Bugatti Chiron is worth every single penny

Every once in a while, the automotive world is introduced to a car so revolutionary that it goes slightly off-kilter. This year, that car is the Bugatti Chiron. With impossible figures such as a power output of 1,500 hp, an exceptionally high torque value of 1,600Nm between 2,000 and 6,000 rpm and a top speed of 420kph, the Bugatti Chiron sounds like a concept car — except it isn’t. Here are five things you need to know about Bugatti’s latest mean machine. 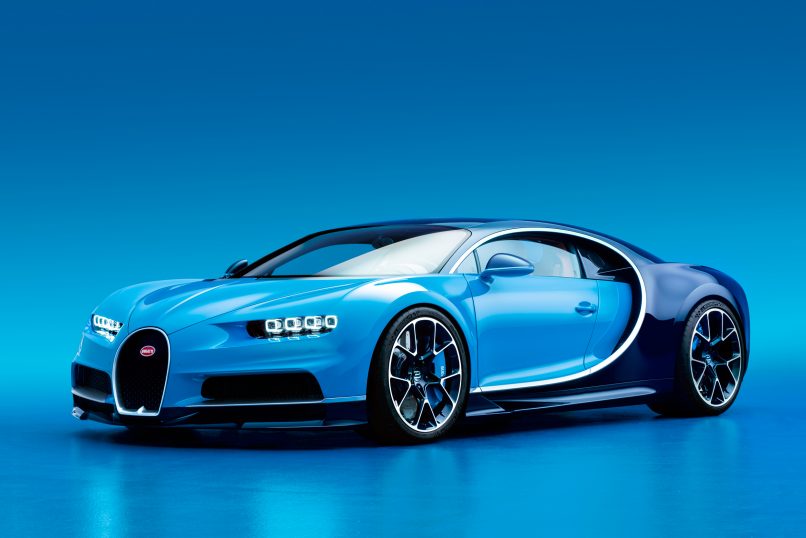 As the world’s fastest sports car — a title it’s snatching from its predecessor, the Veyron — it comes as no surprise that the Bugatti Chiron is made mostly out of lightweight carbon fibre, starting from the monocoque. The French high-performance car manufacturer boasts that this newly developed unit is technically the most sophisticated, and is attached to a carbon fibre rear-subframe that saves 8kg and boosts rigidity. There’s also the carbon fibre underbody that further boosts torsional rigidity that compare to that of an LMP1 race car. We also have to mention that even the car’s airbags shoot through an advanced carbon fibre housing.

Outside, Bugatti’s perfectly aligned carbon fibre is surely testament to its crazy quest for automotive perfection. 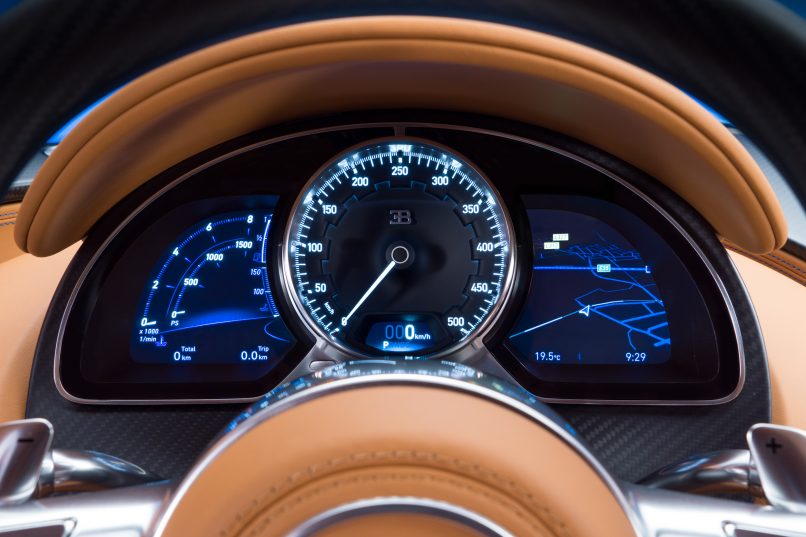 If you’re flying from nought to 100kph in less than 2.5 seconds, we’d imagine the car’s agility and handling are of utmost importance to you. Which is why the good guys at Bugatti have stopped at nothing to make sure you enjoy the blistering speeds, sans the cold sweat. The newly-developed adaptive chassis provides more precise steering response, faster cornering and promises to stick to the road despite high cornering speeds. With five different driving programs —Lift, the standard automatic EB (that’s short for Ettore Bugatti, founder of Bugatti), Autobahn, Handling and Top Speed — the Chiron behaves as you want it to. Each is an unique blend of settings for chassis height, torque distribution, steering weight, active zero and electronic stability system. No prizes for guessing which mode gets you to the fabled 420km/h.

Together with Michelin, Bugatti developed entirely new high-performance tyres that were developed at aerospace industry test rigs, so they work just as well when cruising down the roads as when they rocket down race tracks. Coupled with the Formula One-qualified carbon ceramic brake discs, which provide better improved corrosion resistance, performance and durability, it’s reassuring to know that the Chiron dissipates an extraordinary amount of braking energy. 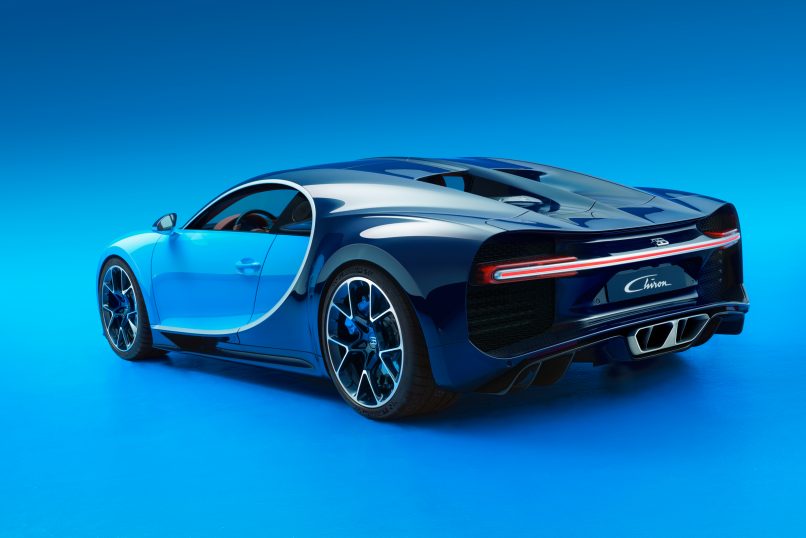 The Chiron isn’t just a pretty face. While it takes its design cues from the Veyron, each feature is also now carefully considered to complement its insane engineering. The iconic “Bugatti Line” — a sweeping curve that defines the car’s profile — acts as an intake that feeds and cools the 16-cylinder engine. Quad LED-fitted headlights also direct air towards the front brakes and the distinctive rear, with its all-round trailing edge, lowers drag and creates suction that pulls hot air away from the engine.

More power from turbochargers means more turbo lag – or does it? In the Chiron’s newly developed W16 engine sits four larger, high-performance turbochargers that are operated in a two-stage turbocharging system. To achieve maximum acceleration from standstill without the lag, Bugatti moves off the mark with only two turbochargers in action, while the other two are activated at about 3,800rpm. This tandem-work ensures improved throttle response and a power output that is easily controlled.

The new titanium exhaust system assists by reducing back pressure and houses two larger catalytic converters, each six times the size you’ll find in a family-sized car. Six exit pipes — four out the back, and two pointing downwards — boost downforce. We’re talking about technology that’s been proven, but subsequently banned in Formula One racing here. 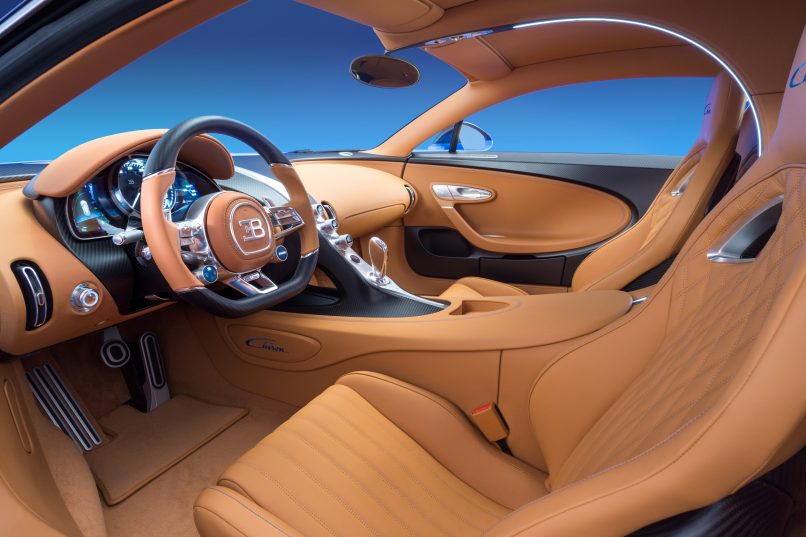 Inside, the Bugatti Chiron is just about as luxurious as you would’ve expected it to be. After all, this is a car that starts at €2.4 million (SGD3.7 million). Equally inspired by the Bugatti Type 57SC Atlantic as the exterior, the symmetrical layout within is an exercise in minimalism to manage driving distractions. Entertainment and driving information on the Digital TFT screens thins out proportionately with how fast you’re going, because what’s on your playlist should be the last thing on your mind at crazy speeds.

Cars Super Cars Hypercar Bugatti Chiron
Shatricia Nair
Deputy Editor
Shatricia Nair is a motoring, watches, and wellness writer who is perpetually knee-deep in the world of V8s, tourbillons, and the latest fitness trends. She is fuelled by peanut butter and three cups of coffee a day.
Motoring Wellness Watches