The world of Formula One has been such a fast-paced one that people don’t often have the time to look past the glitz and glamour of the drivers, their teams, and otherworldly-looking cars. They are, after all, off to the next stop — usually halfway around the world — the minute the festivities are over.

Yet the business of Formula One is actually intrinsically complex, so much so that it goes beyond the rat race for the most efficient next-generation 1.6-litre V6 turbo engine, or which driver made a lap time record. Here’s what really goes on beyond the tracks and behind the scenes of Formula One.

The climb of Formula One is just as inspiring as it is scandalous, and the Fédération Internationale de l’Automobile (or more commonly, the FIA) can be credited for that. Thanks to unprecedented access courtesy of Rolex — Formula One’s official racing timekeeper — we managed to peek behind the curtains of the FIA Race Control centre for a chat with its Race Director, Charlie Whiting. As the governing body that’s widely known for lording over the racing teams with an endless barrage of strict regulations, it’s no surprised that it’s received a lot of flak over the years — though nothing that Whiting can’t handle.

“It’s usually quite straightforward,” he mused when asked about the hardest aspect to govern. “We have a lot of information and intelligence, especially when teams report misdemeanours against each other, of which 90 percent are not valid. But we listen anyway.”

Inside the headquarters, eagle-eyed officials sit glued to the multitude of screens, watching every possible angle on the race track via high-definition cameras. The federation doesn’t rely on broadcasting cameras to ensure they always have clean, unbiased footage of the race at any point in time. Whiting makes the final decision over any dispute or mischief attempted.

As the man who has guarded the sanctity of the races since his appointment as director in 1997, Whiting does admit that the hardest part about governing the race is determining the right time to deploy the safety car during bad weather. “If it rains quite hard, you need a justifiable reason for putting the safety car out, otherwise you’ll see three cars spin out and the drivers will question why you didn’t activate it sooner,” he explained. “Then there’s the other issue of when to bring [the safety car] back in again, because opinions will vary massively.” Whiting’s other responsibilities include managing the logistics of each Formula One Grand Prix, deploying the medical team, inspecting the cars in Parc Fermé, and – as the Permanent Starter of Formula One – controlling the lights that start each race.

Whiting reluctantly admits that teams still try to find loopholes in his system, although he’s quite proud to add that those have gotten smaller and harder to find. “When we ban a system on a car for example, they’ll find something else that we haven’t looked at before, like putting a little wing somewhere to make the car a hundredth of a second faster for that extra edge. It’s a cat-and-mouse game” The FIA’s rule book has become rather iron-clad over the years, and while it has made the sport more restrictive, is still worth having for safety. “We’re always playing catch up because there’s a couple of thousand clever engineers out there and only 10 of us,” he jokes.

Back out in the paddocks, the manic rush of the teams preparing for the most gruelling race of the season doesn’t faze Formula One safety driver Bernd Mayländer. After all, the statuesque German’s only job is keeping the pace at the races. His office sits him behind the wheel of the latest Mercedes-AMG GT R.

Two of these stunning 577hp sports cars wait alongside Bernd in the paddock waiting for the go-ahead by Whiting at FIA Race Control in the incident of a collision or heavy rain. Surprisingly, the GT R is standard issue by Mercedes-AMG; save for the two cameras and blinking police lights on the roof, it’s outfitted with the same “basic” 4.0-litre AMG V8 biturbo, suspension system, and 7-speed AMG Speedshift DCT dual-clutch gearbox — nothing you can’t buy at the dealer. AMG has supplied Formula One its safety car for 22 years now since 1996, outdoing Mayländer slightly in experience since he’s only in his 19th season now, though he cheekily pointed out that he has more Grand Prix under his belt than the drivers.

As the official (and only, on most occasions) Formula One safety car driver, Mayländer has had to have enough credentials to be conferred the title by FIA. Besides stints in Formula Ford and the Porsche Carrera Cup, he also won the 24 Hours Nürburgring in a Porsche 911 GT3-R, and worked with Mercedes-Benz when Deutsche Tourenwagen Masters (DTM) series resumed the same year. He pushes the GT R to an average speed of a blistering 240kph — rain or shine — on the tracks, though it looks much slower on camera. “I have to try to go as fast as possible. It’s already very slow for the F1 cars,” he explains.

Like the other drivers, the Marina Bay circuit is one of the toughest for him. “You have to be really focused, especially with the humidity and temperature. It’s a really long race, and if you just make a very small mistake you’re on the wall. I can’t take any risks, especially it’s a safety car.” In the event of a tyre puncture, he has to head back to the pit stop to bust out the spare car whilst the leading car behind him takes his place for a lap.

To date, he has led over 700 laps in Formula One, all of which has seen him forgo the luxury of creature comforts like air-conditioning in exchange for more power from the engines to keep up. Still, he admits that the Mercedes-AMG GT R is the perfect car.

Rolex also offered us the rare chance to pass into the sport’s inner sanctum for an exclusive look at the brain of the entire Formula One business. Besides producing 90 percent of television footage of the races (wherever you are in the world), the International Broadcast Centre also created the entire timing system for Formula One — not coincidentally also the most accurate timing system in the world.

Tata Communications, the tech firm running the show, also designed from scratch the cameras fitted on the roof of every Formula One car. The compulsory addition for every car is a rule enforced by the FIA, and ensures the smaller teams without the money and the bigger guys have the same kind of system. At 5.5kg, the weight penalty is fairly significant, but receives the transmission of all the audio, video and team telemetry. While the International Broadcast Centre can live with a busted camera during the race, radio transmission is integral for the safety of the drivers.

Nitty gritties such as the start lights, the vicinity’s multiple Rolex-branded clocks, turnstiles, passes, and even winner’s podium are also designed, developed and run by the firm. The team of 400 deals with 200 tonnes of equipment that requires two 747 cargo planes and 28 trucks to move every other week.

The International Broadcast Centre is the world’s biggest truly mobile broadcast centre, and it’s specially designed as such. The cavernous temporary building is able to fold itself efficiently into a frame the size of a certified air freight pallet while at the same time protecting all the equipment within. It supposedly takes longer for the container to go on the truck than to actually pack it. The office bustles with staff working on data piped fresh from the track, from every corner and from every car, but no one panics at the overwhelming figures, because their roles are so clearly defined for efficiency. Their perfect Waltz is practised every Thursday without fail, where a “full-dress rehearsal” sees cameras, uniformed staff, and the safety car on track for an hour to ensure all systems are working.

Though immensely instrumental, the life of a mechanic is often met with little glamour, but Rolex brought us right into the inner workings to spotlight Formula One’s unsung heroes. In Force India’s case, more than a dozen in the garage contribute to the massive whirlwind of activity as they awaited their car earnestly. Another handful kept track of data and live TV feed off a series of screens, wearing earphones that transmitted progress broadcasts from driver to team.

Pit stops are twice as intense and impressive when witnessed live; the two-second flurry of activity easily hides the fact that everyone has to work in perfect harmony, yet there was so little fanfare about the remarkable execution. When the cars came back from the tracks eventually, wheels were taken off and examined while the driver discussed his trip with a mechanic over a blast of cool air. The work never ends, it seems.

In a sport that relies on precision to a thousandth of a second, even the slightest human error can be detrimental for both drivers and their team. Yet man and machine have managed to not only co-exist, but push the boundaries in all ways to make Formula One one of the world’s most revered motor races of all times, and maybe therein lies the real magic.

Gear
Q&A: Mark Webber reflects on the racy business of Formula One 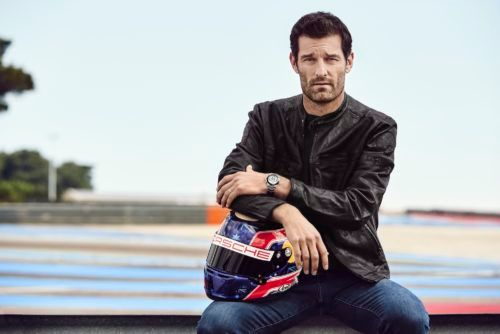