These luxury speedboats combine adrenaline with a good dose of extravagance

Mega yachts may be a great vehicle for that romantic getaway but it also has the exhilaration equivalent of being on a ferris wheel in a park full of rollercoasters. Which is why they often come packed with entertaining toys like jet skis and waterslides. If speed and adrenaline are your thing, however, you’ll want to consider hitting up some speedboats instead.

Essentially smaller yachts on steroids, speedboats have come a long way since they were first outfitted with a petrol engine in the 19th century, following the invention of the internal combustion engine. Like racing cars, they piqued the interest of the rich and famous for their unbridled speed and svelte silhouettes.

While many are still synonymous with hair-raising speeds, the speedboats of today have also been kitted out for luxury and lounging. Spacious decks now pave the way for leather-swathed sun decks, jacuzzis and wet bars at arm’s length from the captain. With a well-honed proficiency in both speed and luxury, car companies are also getting in on the action to create speedboats that can rival that of established vessel firms.

Here are five of the coolest vessels you’ll want docked at the marina now.

Transfused with all the qualities and timeless charm of the cult classic Aquarama, the Aquariva Super takes the baton for being one of the most fashionable speedboats ever made. The vessel takes the same sleek, elegant lines as its predecessor, and is immediately recognised for its mahogany deck — lashed with layers of Stoppani varnish — and leather-swathed open cabin. Beneath the chic silhouette lies state-of-the-art technology, such as an electronically-controlled two speed gearbox that boosts the twin 370hp Yanmar engines to a top speed of 41.5 knots. At the stern, the spacious sun pad stays true to the Rivas of the past, giving the rare opportunity to soak up the sun just as Brigitte Bardot and Sophia Loren once did.

Predecessor to the VanDutch 55, the 2018 VanDutch 56 features significant advances that highlight the Fort Lauderdale-based firm’s dedication to innovation. The designer boat — characterised by its clean, austere aesthetics — sports an automated swim platform, new roofing systems, and works exclusively with Garmin Electronics for the most intuitive user interfaces around. A wet bar near the cockpit means that a glass of bubbly is always within reach, while the new Wireless Captain Controls allows for detailed manoeuvres from anywhere on the boat with a single remote control. Little wonder the Fort Lauderdale-based firm counts Cristiano Ronaldo and David Beckham as clients.

Aston Martin must’ve been bored of being king of the roads; it’s now looking to take over the seas too. The AM37 is a million-dollared beauty that was first announced in 2014. At 37 feet — hence the name — the svelte boat was made a reality by Aston Martin’s Chief Creative Office Marek Reichman, who successfully translated the same “golden ratio” rule from the cars onto the vessel. The result is a seamless design which can be customised extensively for your six passengers and two crew members. Two versions are available — the base model is capable of 45 knots, while the AM37S ups the ante with a top speed of 50 knots.

The time will come when your Bugatti Chiron will no longer excite you but before you cry expensive tears, take comfort in knowing that the French car manufacturer has got you covered with the Bugatti Niniette 66. The first of the series of three luxury boats, the vessel retains many of the firm’s signature engineering traits, and while it doesn’t travel nearly as fast as its road counterpart at 44 knots (80kph), the highlight is the accessories it comes with. Besides a leather and blue mortar oak, the spacious deck sees a sun pad, champagne bar, a jacuzzi, and an on board fire pit — because why the hell not.

It’s one thing to drive at 190kph on the roads, but a whole new experience at sea —  especially in an open-cockpit boat. Inspired by the ludicrous Mercedes-AMG GT R, the slender 50 Marauder AMG powerboat matches the road rocket in terms of ride, with the ability to stay rigid but also be flexible to absorb the ocean’s impact at high speeds. The same “Green Hell” accents run along the carbon-fibre sides and silver topsides, which gives the boat the illusion of speed even when it’s docked. Don’t expect too many creature comforts — there’ll only be stitched leather seats, eight stereo speakers, and a minimalist cockpit. 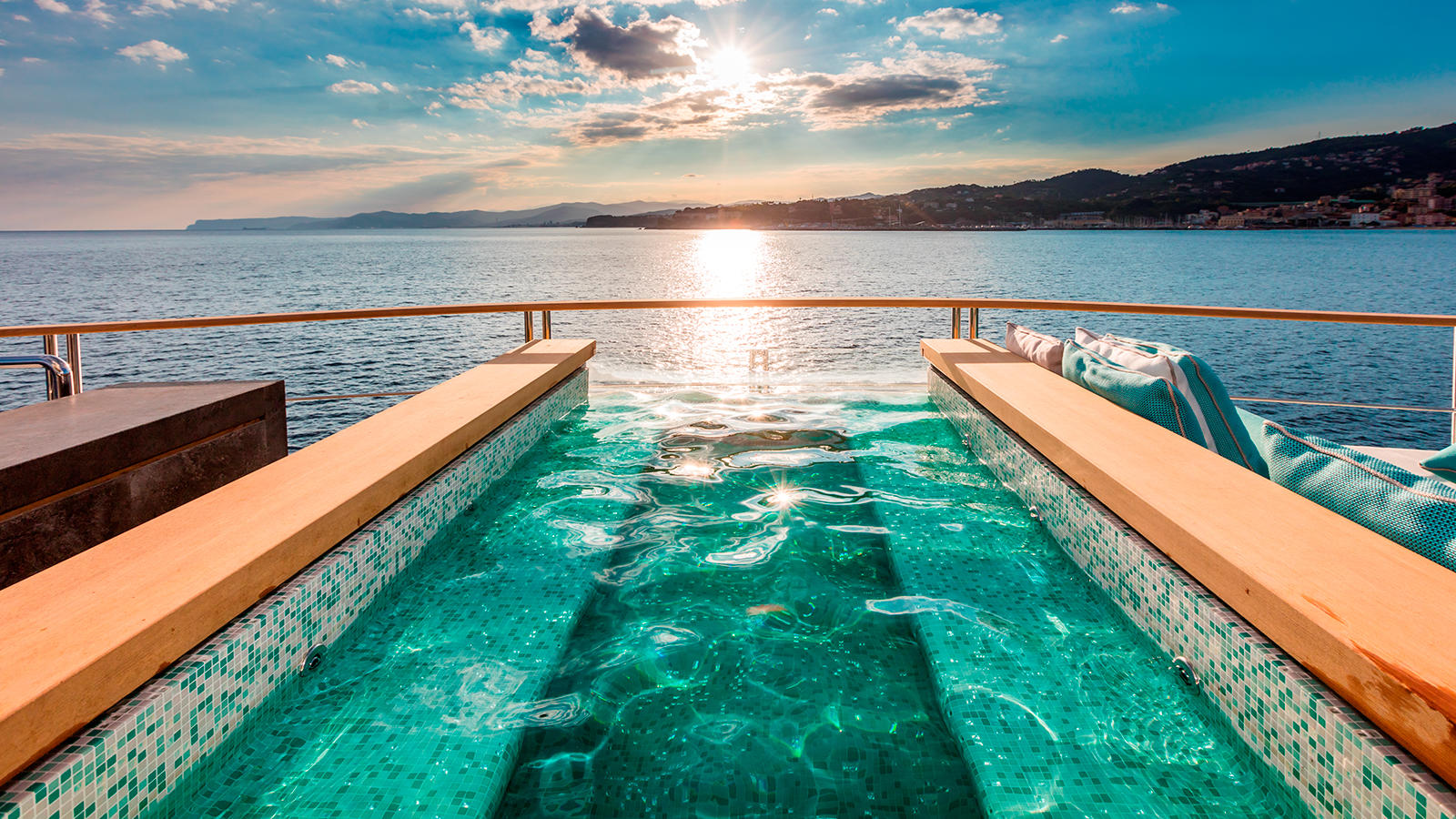