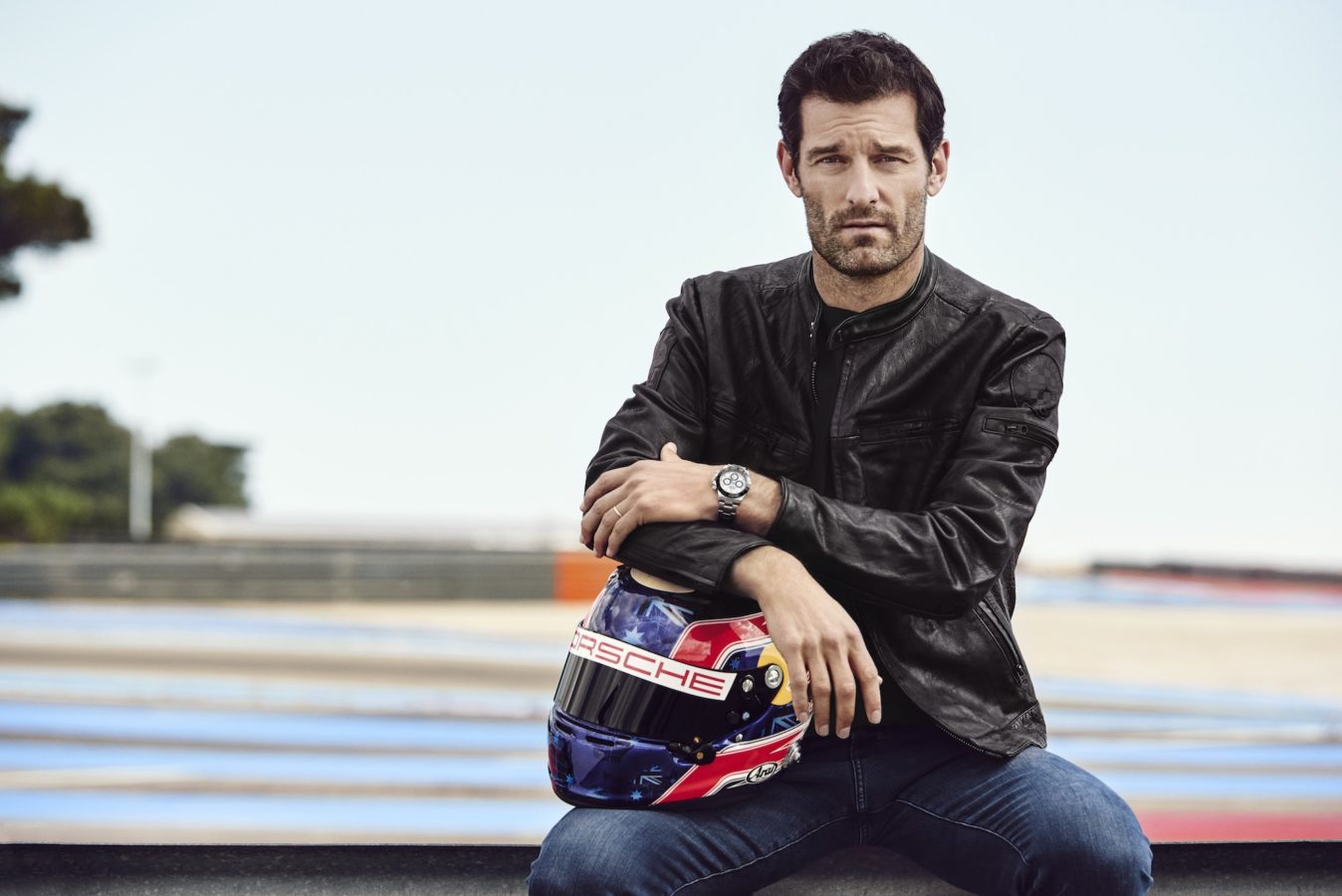 Q&A: Mark Webber reflects on the racy business of Formula One

Gear
Q&A: Mark Webber reflects on the racy business of Formula One
Share this article
Next article

For all that he’s achieved — including nine Formula One Grand Prix wins and being the FIA World Endurance Champion 2015 — you would never have guessed that Mark Webber silently battled a handicap throughout his motor racing career: His size.

At 1.84m, the tall and lean Australian former professional racing driver has had to work doubly hard in making the weight cut for pint-sized cockpits, yet he never once cracked. Now, the newly-minted Rolex Testimonee brings the same level of professionalism to this new chapter of his career, his confident demeanour and unapologetically charming smile easily winning the hearts of guests at the Rolex Suite at the 2018 Singapore Grand Prix’s prestigious Paddock Club.

He joins a venerable league of athletes in this endeavour with Rolex, most notably with fellow Formula One legend Sir Jackie Stewart, whom he endearingly refers to as his “hero” and “father figure”. Although now retired from the world of motor racing following other stints at FIA World Endurance Championship and 24 Hours of Le Mans, it was apparent Webber still had a burning passion for Formula One. It’s a surreal transition for anyone who started off with go-karting at the age of 14, after all.

Now that sport is going through relatively seismic changes, we took the opportunity to sit down with Webber to look back on his life on the track, discuss the Formula One business, and understand his special relationship with Rolex.

Style
The new Oyster Perpetual Rolex Deepsea dive watch is king of the depths
You've returned to Singapore as a spectator this time. Do you miss racing, and which aspect do you miss the most?

I do miss the team element of it. You work with the best people in Formula One. It’s cutting-edge — you’re always looking for that gap which could give you an advantage, and you want to work with the best people for that. As a driver, I miss some of that mentality because everyone in the sport is a winner, especially the engineers and the mechanics. I think that makes it a beautiful environment to be in. But I also know that it’s a young man’s game (laughs). I retired from this incredible business and sport at the right time when I was 38, but I’m very fortunate to still be in the business with some of the best people here now, like Rolex.

I don’t think a lot of people realise how strenuous it is for the drivers during the race. What are some of the most common misconceptions about Formula One drivers?

The G-forces, the amount of concentration and the temperature in the car are some of the most unfathomable situations to regular people. We easily lose at least two kilograms from dehydration after a race, so preparation is crucial. It’s very hot inside the car, and I’ve had many tough nights after racing here on Sunday. Our feet get blistered because the temperature of the floor is immense, but we can only endure it throughout the race.

When people watch the race on television they think that we can see everything, but every person that I’ve strapped into my Formula One car comment that there’s absolutely no visibility. It’s a very alien environment for most people. Two hour-long races like the ones here are especially gruelling with the amount of focus required. Formula One drivers have immense distraction control; we’re very good at blocking out distraction that would otherwise get into people’s emotions and decision-making in life. You can see in the drivers’ eyes that they’re mentally depleted when they get out of the car after a race. Composure and mind management are very important in this sport.

What is the most important lesson you’ve learnt on the track?

I’ve received so many pivotal lessons on the track. I’ve learnt that hard work is absolutely crucial, that you should never rest on your laurels, and to treat people like how you’d treat yourself. There are a lot of people in the background, such as the engineers and mechanics, who do a lot of work but usually do not get the credit.

Another trait that I’ve gained for life is resilience. It helps you deal with the ebb and flow of professional sport, which you can then relate to in your personal life. You have to always be tenacious, resilient and self-confident, and that’s what motor racing gave me.

You’ve been racing for 15 years and to get to the pinnacle of motorsport sport you must have had to make sacrifices along the way.

A lot of athletes talk about making sacrifices but I believe that if you truly desire something, there are no real sacrifices to be made because there is no plan B, you just have to make it happen. You have set yourself apart from the rest, and to be prepared to do what other people aren’t in terms of workload and ethics.

I had to leave home at 17 in Australia to reside a tiny room in London that I could hardly lay straight in because living in Australia and being a Formula One driver simultaneously was impossible. There are only two choices: Either you roll up your sleeves or you go home. It all boils down to resilience and making sure you survive in those scenarios. I had to live with a strict diet and to live eights months out of a year in a hotel room after starting in Formula One; a lot of discipline is required to stay on top.

What would you like to see change the most in Formula One?

Stability is crucial, and I think the sport needs more of it. It’s important that we continue to have the sport showcased through as many means as possible because we need new viewers. However, we also have a new generation of people that’s getting less patient for such long events because there are too many distractions in our lives now. Back in the ‘80s and ‘90s we didn’t have a problem with setting aside three hours to watch the race, but we need to understand that people might not want to set aside a weekend to do the same now.

We also can’t sanitise the sport too much because there needs to still be an element of risk. I do not want to see people getting hurt but we should hopefully reach a ceiling where the sport is still gladiatorial and interesting to watch.

Do you think the new Formula One owners, Liberty Media, will make a difference to the sport?

There was obviously a big change after Bernie Ecclestone, because he was a one-man army running the whole show. We now have a lot of people working on making the sport better commercially while keeping the race a spectacular affair. I think that they’re learning a lot quickly, even though they can’t implement as many things as they’d like to straight away. They are, however, doing a good job in trying to find the balance between making this European-based sport relatable to every culture.

The teams are still very powerful from Bernie’s backing and they too are smelling a chance for change. It goes both ways — they’re testing Liberty Media too. It’s a very dynamic period for the business.

What are your thoughts on the changes in drivers for Formula One 2019?

I think all the changes have been reasonably predictable apart from Daniel Ricciardo leaving Red Bull for Renault. A bit of a surprise that Kimi Räikkönen stayed on in Formula One, but he’s still driving well so age is really just a number for him. It’s also very exciting to have young talented drivers like Charles Leclerc (pictured above) qualifying for big teams like Ferrari.

But we still have the old guards there, who are also my old buddies. Fernando Alonso is going to retire after this year, so Lewis Hamilton and Sebastian Vettel are really the last two that I used to race against. I think we’re in good hands in terms of talent.

Of all the watches out there, why did you buy a Rolex after your first Grand Prix win in 2009?

It was a very easy decision because I’ve been waiting for a very significant moment in my life to buy myself something that means so much to me. It was a 15-year mission to get myself on the Grand Prix podium from when I started go-karting at 12 years old. Obviously I wasn’t thinking about getting a Rolex when I was 12, but over the years I grew to appreciate its sophistication and timelessness. I think the Rolex GMT I bought a week after winning the race really represented the time I was in. I loved its reputation for precision, while being simple and robust.

What are the most important qualities you look out for for a watch for drivers?

Reliability is very important for us. Racing drivers are used to precision and there’s no margin for error. Our whole lives are exposed to that principle on the race track, so we can’t tolerate anything that does performs otherwise. We need something that we can count on, especially since we get pushed to the limits all the time.

What are your 3 proudest driving moments?

Winning the Monte Carlo Grand Prix 2010 and receiving my trophy from Sir Jackie Stewart, winning my first ever Grand Prix in 2009, and winning my first race away from Australia at the Formula 4 in 1996. It gave me the confidence to compete at an international level and against drivers I only previously read about in magazines.

What’s the next challenge for you?

I want to do the Race Across the Sky again to outdo my personal record. It’s a big problem for my wife because she doesn’t like me doing long and extreme events, but unfortunately it’s in my nature. I’ve got to spend less time with my crazy friends because that’s when we come up with ideas like these.

How do you prepare yourself mentally for all these challenges?

I draw on a lot of experience now, but I also seek good counsel and ask a lot of questions from people who have experience too. Their hindsight is your foresight, so you want to try to learn from other people. But I always have a fascination with the unknown, and constantly try to test and push myself. Fortunately — or unfortunately — that’s how racing drivers are wired. A lot of people overthink events like that but we make it simple in our minds and just do it. There’s no “maybe” or “not sure”, we get it done.

Formula One Q&A Mark Webber Formula One driver 2018 Singapore Grand Prix interview with mark webber
Shatricia Nair
Deputy Editor
Shatricia Nair is a motoring, watches, and wellness writer who is perpetually knee-deep in the world of V8s, tourbillons, and the latest fitness trends. She is fuelled by peanut butter and three cups of coffee a day.
Motoring Wellness Watches