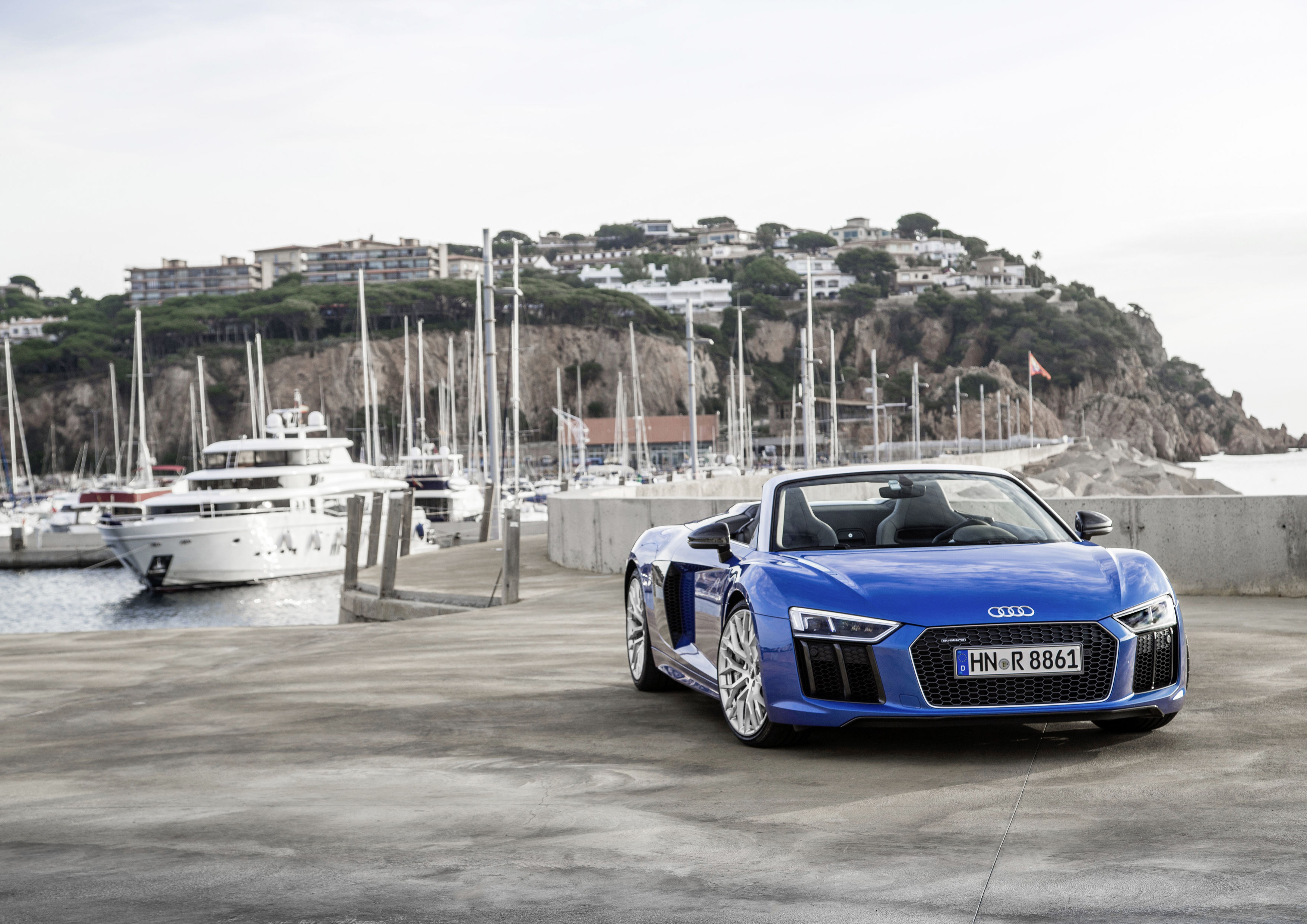 Review: the Audi R8 Spyder is a chiselled dream to drive down open roads

The new Audi R8 Spyder can do everything and not much at the same time. It can go to 100kph in a mere 3.6 seconds, but will only carry a grand total of two grocery bags. It’ll also give you more admiring stares than you’d feel comfortable receiving, so try getting out of that car gracefully. Of course, all doubts vanished when I first caught sight of the R8 Spyder. Hugging and showing off its very raw curves to maximum effect was Audi’s metallic Ara Blue paint. It’s hardly like anything you’d usually see on the roads, and at first glance, reminded me of Corvettes from a decade ago. Surely this will help it stand out amongst its more aggressive-looking supercar rivals. The best part? The Audi R8 Spyder looks good whether the top is up or down, which isn’t something many drop-top versions can brag about these days.

Okay, but what am I giving up here?

Of course, being wider and more chiselled has its downsides. For one, you’ll have to master the fine art of opening your huge door without slamming into anything else in a tight parking lot. As a mid-engined sports car, the driver sits low and without much room to push back, so I imagine getting truly comfortable inside if you’re above 1.8 metres would be quite a miracle. When you’re done squirming into position, you’ll notice the limited visibility with the top down. I was basically sitting on seats melded to the ground, and being able to look out of it completely required a bit of effort.

It’s an Audi through and through 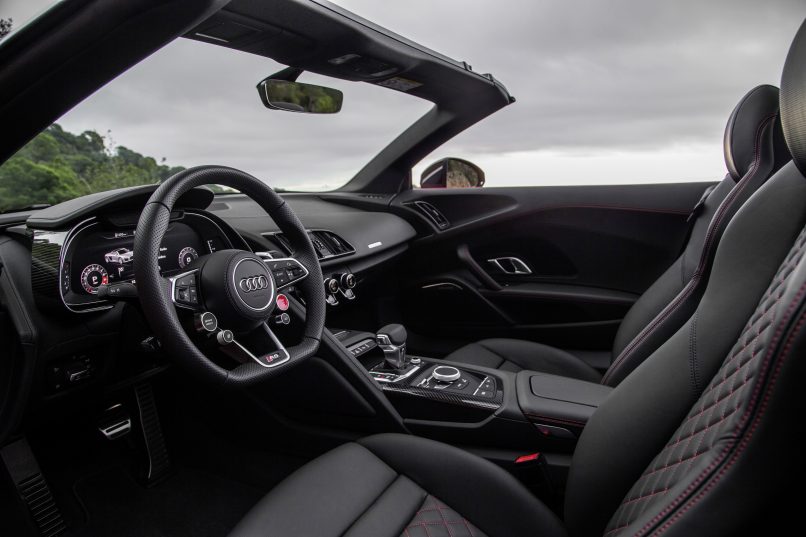 Outside, the car looked expensive and intimidating, but a familiar world awaited as I stepped in. There’s a reason why Audi’s Virtual Cockpit has been lauded as one of the best in the industry for years. The uncluttered and extremely idiot-proof system made it a cinch to navigate around with. Connected to the steering wheel, it was easy to switch between driving modes without having to fumble around on the screen.

On open roads, the Dynamic mode makes pushing the cars to its extremes a dream — the suspension gets stiffer, it rides harder, and shifts gears with such fluidity that you’ll feel exhilarated but safe at the same time. Audi claims its latest version is 55 percent stiffer than the previous one, making it the stiffest open top car you can buy now, but for a vehicle that has a top speed of 318kph, you’d want precision at every turn.

However, for the most part of city driving, I found myself turning to Comfort mode most, where the engine quietens down and the ride becomes gentler for the constant starting and stopping in between traffic jams and lights. One of the things the Audi R8 Spyder is known for is its riotous engine sound, made even louder and in-your-face courtesy of its balanced mid-engined layout, but the V10 symphony was a tad shy of making my hair stand on ends, even with the exhausts open. However, switch the sports exhaust off, and the R8 allowed for an eloquent cruise without fuss.

But if you can afford a Huracán… 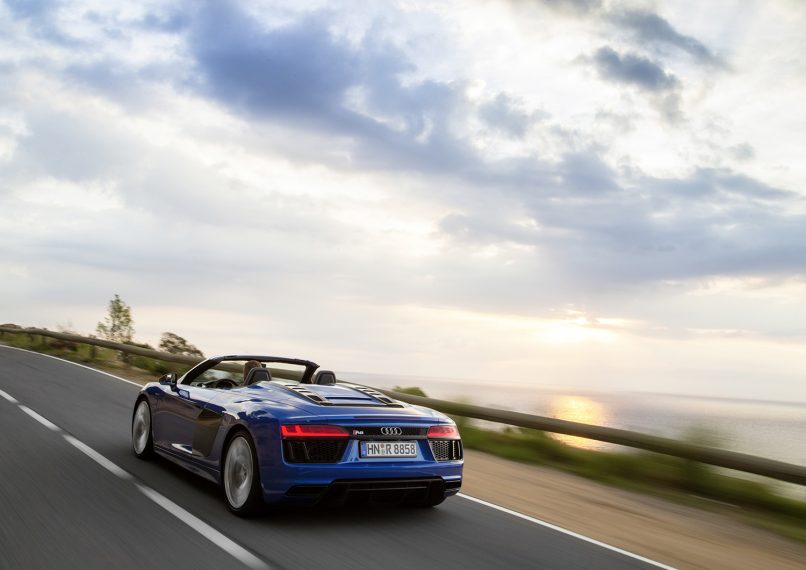 Coupe or convertible, the Audi R8 Spyder is far from your typical family Audi — it underlines the brand’s quiet dedication to creating machines that dominate race tracks besides the common roads. It also epitomises Audi’s fastidious approach to performance and design. However, if you can afford a slight top up, take a brief moment to flirt with the idea of getting its bolder, even-louder and sexier Italian sister, the Lamborghini Huracán instead. Yes, they share nearly-identical drivetrains, and they’re both all-wheel-drive rockets. But in the competitive world of supercars, we all know which one will get you more stares.

Audi Supercars convertible car car review Audi R8 Spyder new cars naturally-aspirated engine V10 Lamborghini Huracàn
Shatricia Nair
Managing Editor
Shatricia Nair is a motoring, watches, and wellness writer who is perpetually knee-deep in the world of V8s, tourbillons, and the latest fitness trends. She is fuelled by peanut butter and three cups of coffee a day.
Motoring Wellness Watches Beauty Style
Sign up for our newsletters to have the latest stories delivered straight to your inbox every week.