Home > Gear > Motoring > Review: The new Land Rover Defender is truly an icon made for the 21st century 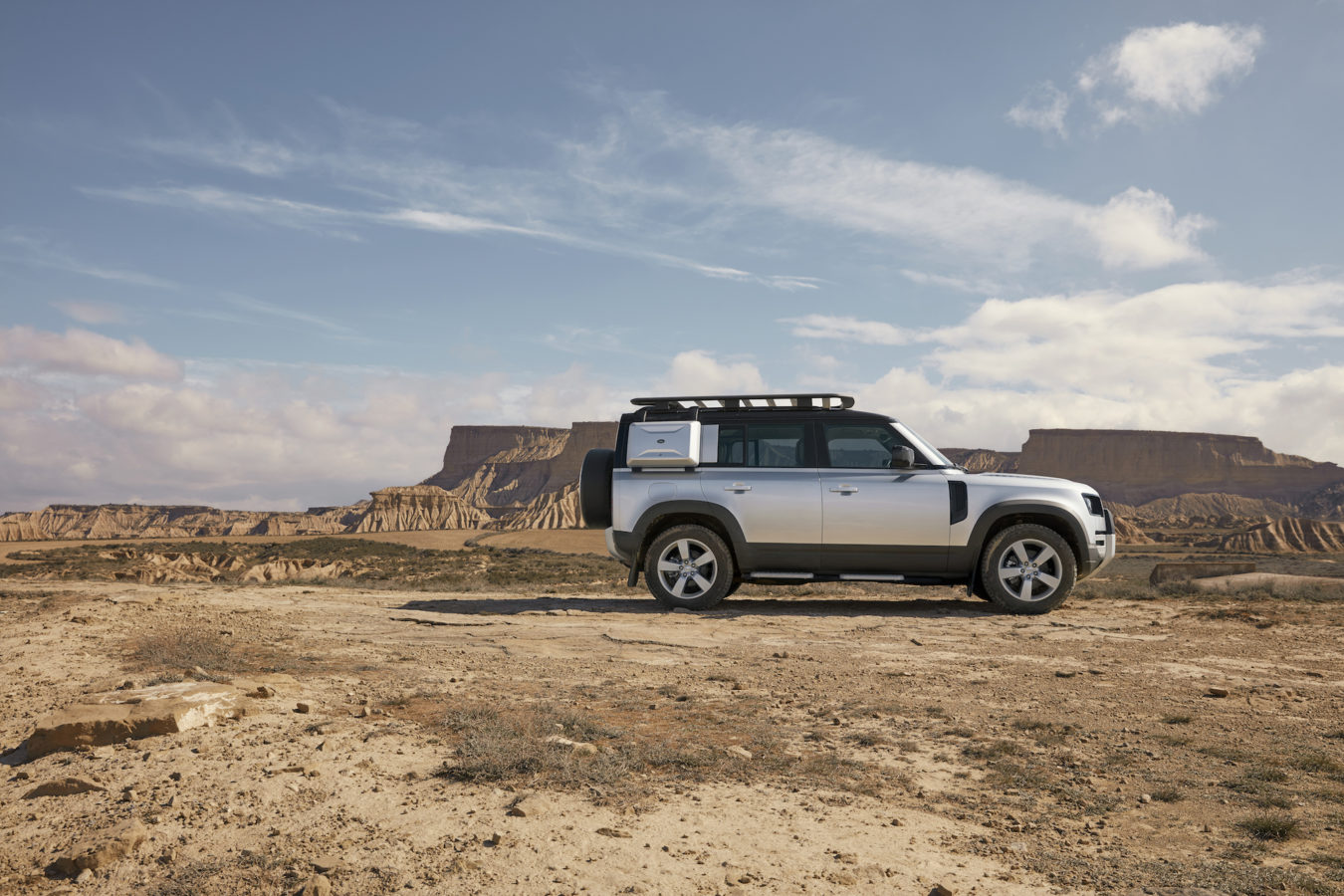 Gear
Review: The new Land Rover Defender is truly an icon made for the 21st century
Share this article
Next article

To say that the new Land Rover Defender was born into extreme pressure is an understatement.

The SUV has had mountains to climb since day one, both literally — it was made for the beaten track, after all — and figuratively, because it’s got mighty big shoes to fill. For a vehicle that was so widely adored worldwide, both for its utilitarian capabilities and remarkable heritage, everyone was eager to find out if the new Defender could ever replace the old one.

Nothing could ever replace the boxy old Defender in our hearts, but pressure makes diamonds, and we can safely say this new one’s about to write its own history. We’ll even be so bold to say that it’ll be as admirable as its predecessor’s. The new P400 Defender 3.0 SE is the best car we’ve driven all year, and it might be that way for a long time to come.

Here’s why the SUV should be on your radar too.

One would’ve thought there was a royal wedding in the works judging from the anticipation that built prior to the unveiling of this. People guessed and the English marque teased. The vehicle that followed was a very modern interpretation of the 4×4’s unmistakable silhouette, which proved to be a little polarising for those who expected the vehicle to be a reincarnation of the original.

But that would be commercial suicide and Land Rover knew that. The original, while an endearing symbol of automobile engineering and design know-how, wasn’t without its own issues. If you wanted a renewed version, just buy an old one and have it restored, although that’ll also cost you a pretty penny. 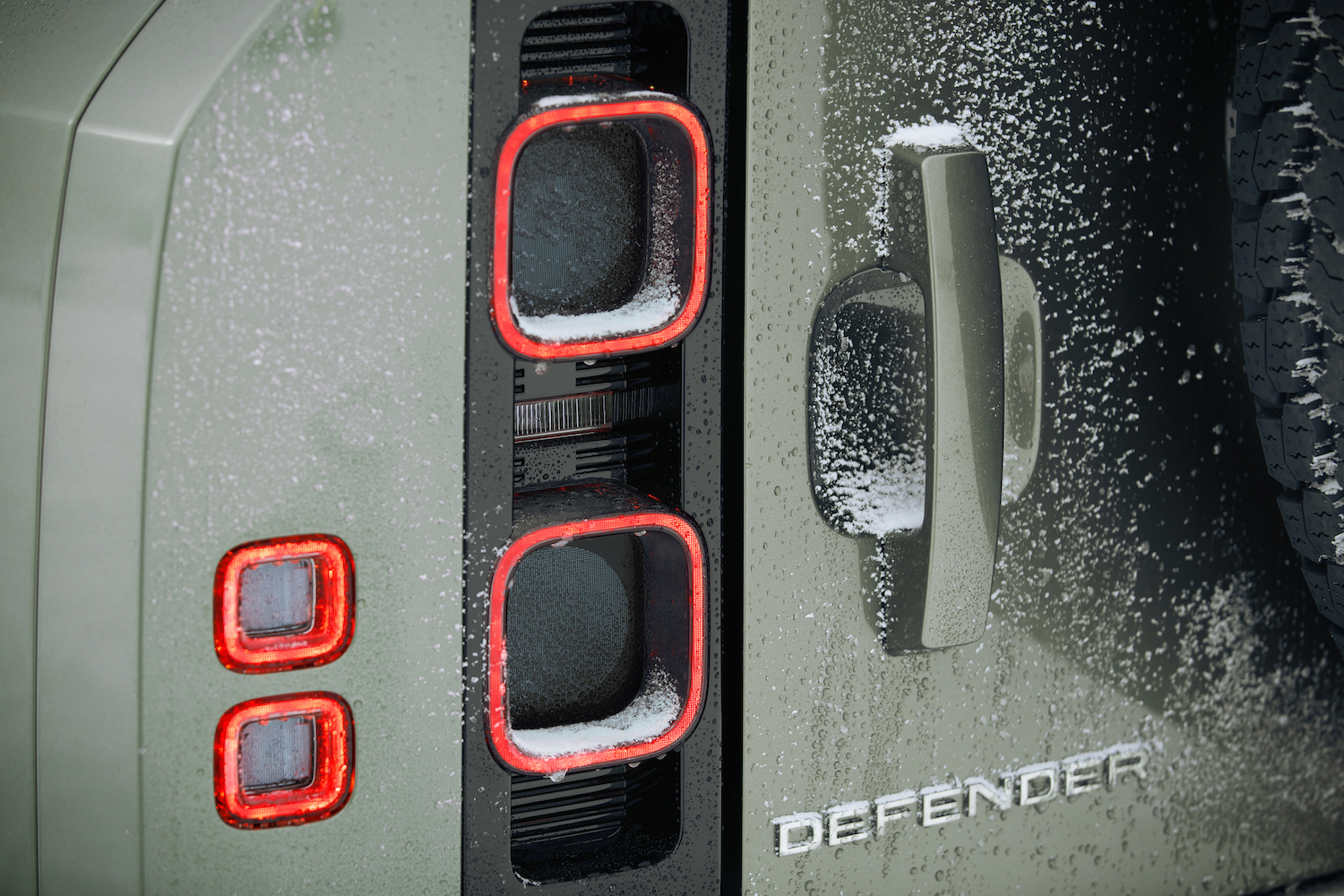 Replacing the iconic SUV after nearly 70 years in production was never going to be easy, but the firm has taken enough elements of the old Defender to respect the heritage, while giving it a softer, more modern look for the 21st century. The sharp angles are now slightly tapered; the upright grille remains and the inspiration from the original’s circular headlights is still obvious, but sliced off the top to create a somewhat more reassuring and approachable face.

Like the headlamp, the squarish rear tail lamp has no outer lens cover. Both flank a spare tire on the swinging door for accessing the rear cargo area — another nod to heritage.

The new Defender walks a difficult line. It must be an object of desire to the prosperous — as are most SUVs these days — but it also needs to provide genuine utility so that farmers and the peacekeeping bunch will show a renewed interest.

The first thing you’ll immediately notice is how high and commanding the driving position is, giving you the feeling that you do indeed own the road. (Side note: Because of this, we recommend you don’t opt for the roof rack in Singapore. The review unit had one and while the advanced air suspension allowed for height adjustments, the rack still made the car too tall for most indoor carparks).

It also doesn’t feel like a hardcore off-roader on the road. The wheels do not stumble over little grooves thanks to its full air suspension, the axles don’t shudder on their mountings and everything feels tightly held together. The ride is soft and gentle and could well pass off for luxury-car comfort.

Yet the biggest surprise was the fact that the Defender had such fine control around the corners. Typically, a car of this height would have poor body control with lots of roll, but the new Defender handled difficult corners and sharp turns with plenty of ease. 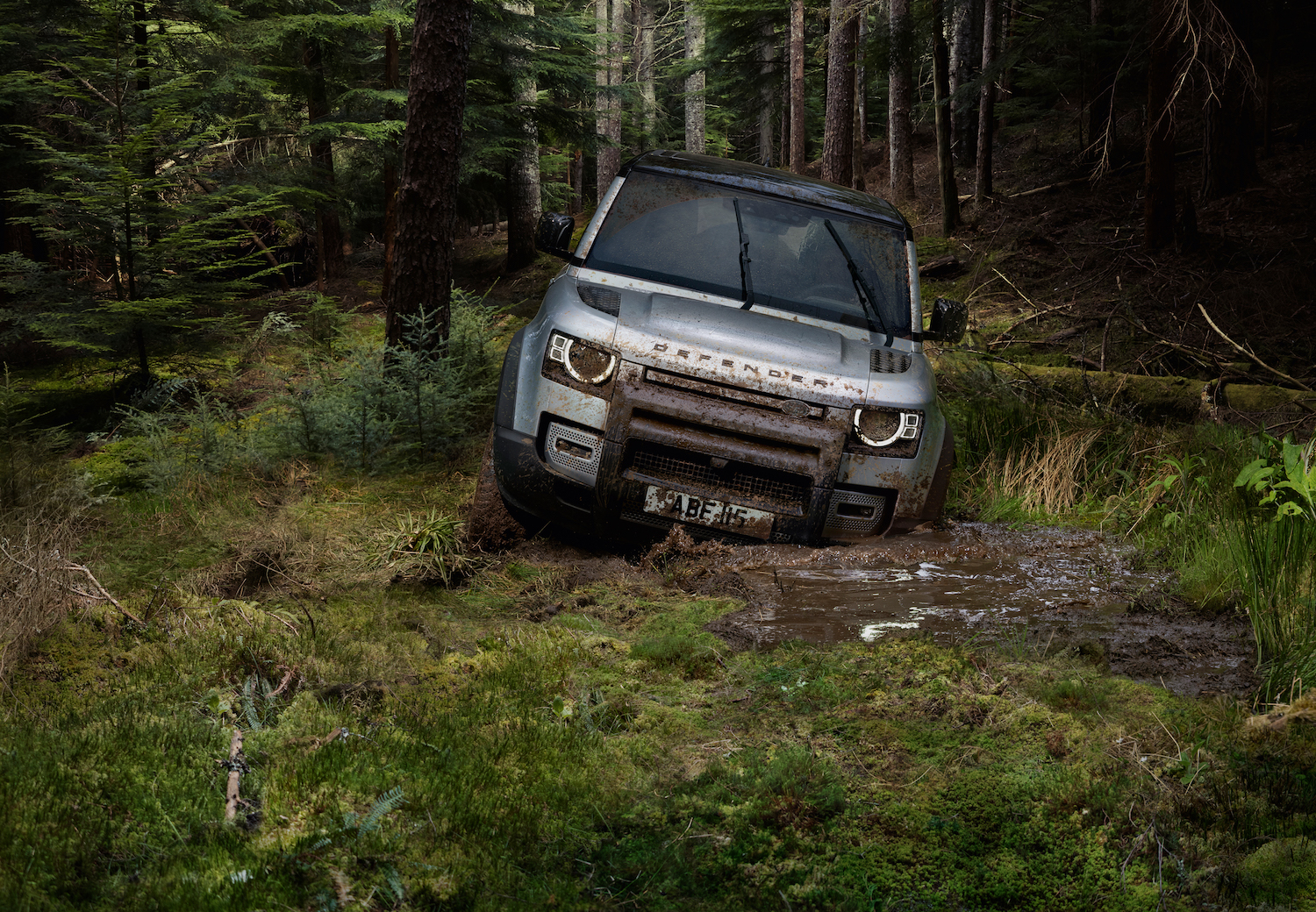 Off road though is where the car truly shines. The advanced all-wheel-drive and traction control-based Terrain Response2 System allows you to switch the vehicle between a number of different settings that adjusts ride height, throttle response and braking, stability control, and vent openings — to name a few.

Now there aren’t many spots in Singapore to try this out — especially since the city is apparently 100 percent paved with roads — so we did the dirty work and drove into the muddiest, most uneven grassy ditches to test this out. Sure, it’s no where near the imperfections of a mountainous course but the car pushed itself out of fairly deep holes and surprise rocks with such effortlessness. The hardware – axles, springs, anti-roll, gear ratios, tyres – worked harmoniously as a whole. Overlaid on that is the software, and Land Rover is better at this than anyone.

Our favourite feature is the Wading setting which actually shows on the infotainment screen how high the water is around your vehicle. If there isn’t a setting that quite fits your needs, you can make your own with Configurable Terrain Response. The Defender’s capabilities are further enhanced by a twin-speed transfer box, and two Electronic Active Differentials in the centre and rear, capable of both acting as locking differentials and limited-slip. It also has features like Hill Decent Control and Hill Start Assist, which has been around for a while with Land Rover. 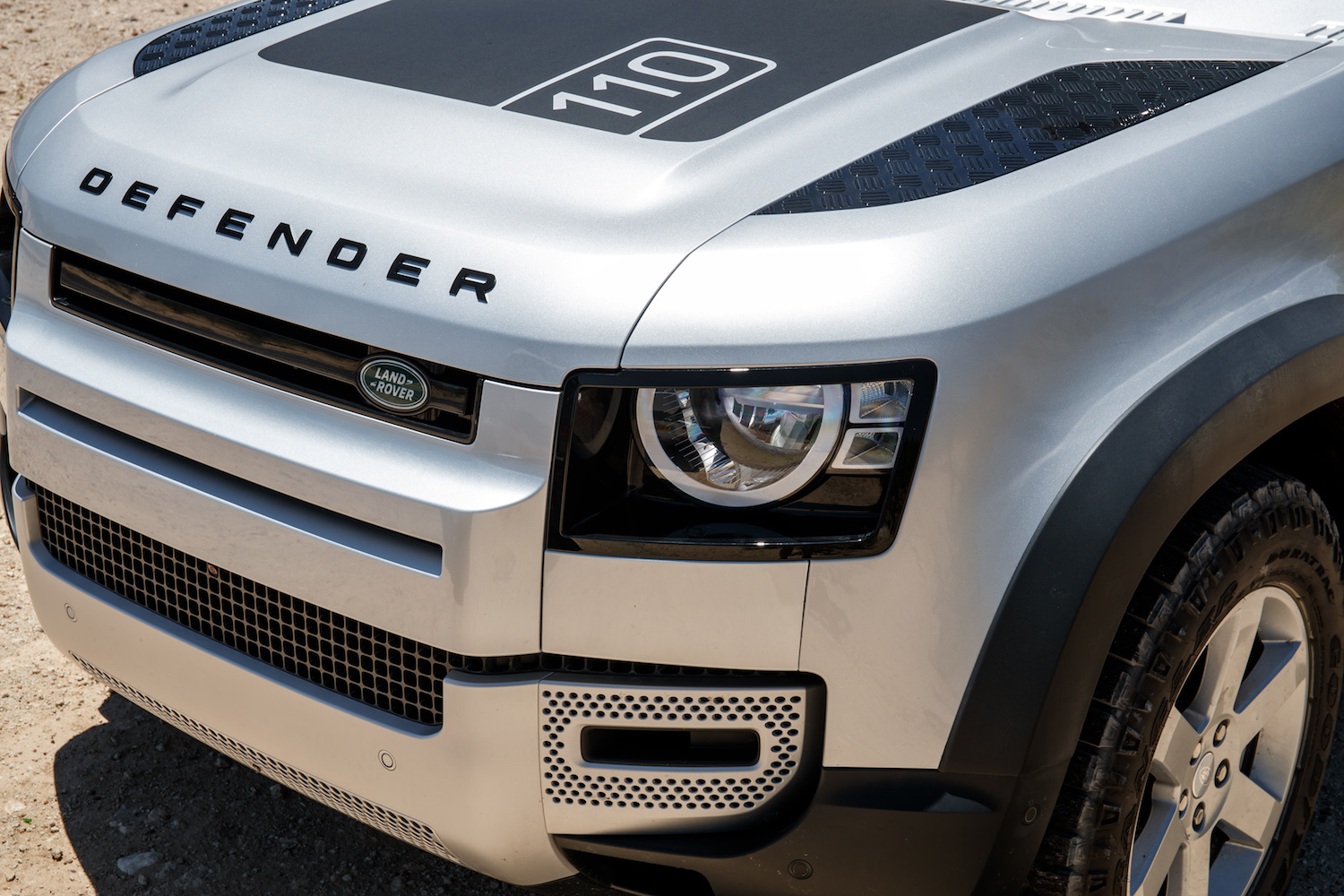 Improving the off-road capabilities further is the actual dimensions of the Defender. It has a very short front and rear overhang. This enables a 38-degree approach, 29-degree break-over, and 40-degree departure angle. The bottom is also very well protected from getting damaged and its maximum height setting — 11 inches of ground clearance — enables you to just about go over anything.

The eight-speed transmission and three-litre in-line six turbo in the SE provides enough power at 395 hp to get the hulking SUV moving with absolute ease. The added 3D Surround Cameras and 360-degree Parking Aid enables you to know what is happening around every angle of your vehicle, so parking is astonishingly easy. The ClearSight Rear View Mirror uses a rear-mounted camera for a clear view behind the car when your view is compromised by passengers or cargo.

If you bought the Defender hoping for an adventure every time you stepped in, you won’t be disappointed. There are bolts running across the sturdy console and structural door liners to remind that this was a car built for the toughness. Even the floors are washable so you won’t have to fret about dirtying it, which ironically, is a luxury in itself.

You can opt for a jump seat so three people can travel in the front (every kid’s dream), but otherwise the space can accommodate cup holders, wireless charging for devices, and a mini fridge (!), which by the way is plenty useful for keeping drinks chilled or when you return to a hot car after buying butter at your grocery run. Charging ports are everywhere in this car so no one leaves with a flat battery.

The SE trims feature a mix of Grained Leather and durable Robust Woven Textile, so you get a mix of luxury and functionality, but we found the latter to be prone to marks, although those wiped off easily with a damp cloth.

Millennials will love that the infotainment system was inspired by a smartphone interface and is hence, one of the easiest we’ve had the pleasure of navigating. It’s fully customisable so you can have the Home Screen show only the features that matter most. The new navigation system also feeds on algorithms to learn and optimise routing for you; hell, the Smart Voice Guidance even knows when to shut up when it recognises that you’re in a familiar area.

The high-res 12.3-inch Interactive Driver Display can also be configured to show permutations of dials and maps. If that’s not enough nerd talk for you, there’s a Remote Tracking technology that’s currently still in testing phase, and will allow owners to access to the car’s location, fuel level, climate control, and car lock and unlocking from an app.

The new Land Rover Defender is incredibly important for the brand. It not only represents a huge redesign for a very iconic model, but also proudly carries on the tradition and heritage of the marque, which spans back to 1948.

If you can use it to its full ability, there’s really nothing that matches it. It’ll take you and your family to school and sporting events, but it’ll also carry you over every precarious terrain like you were the world’s most precious cargo.

On the roads, it’s stately and dignified. Even with a modern facelift, an immense amount of tech, and luxurious trimmings, practicality is still a hallmark of the car, but make no mistake, it’s not boring. In fact, it’ll make you feel alive again.