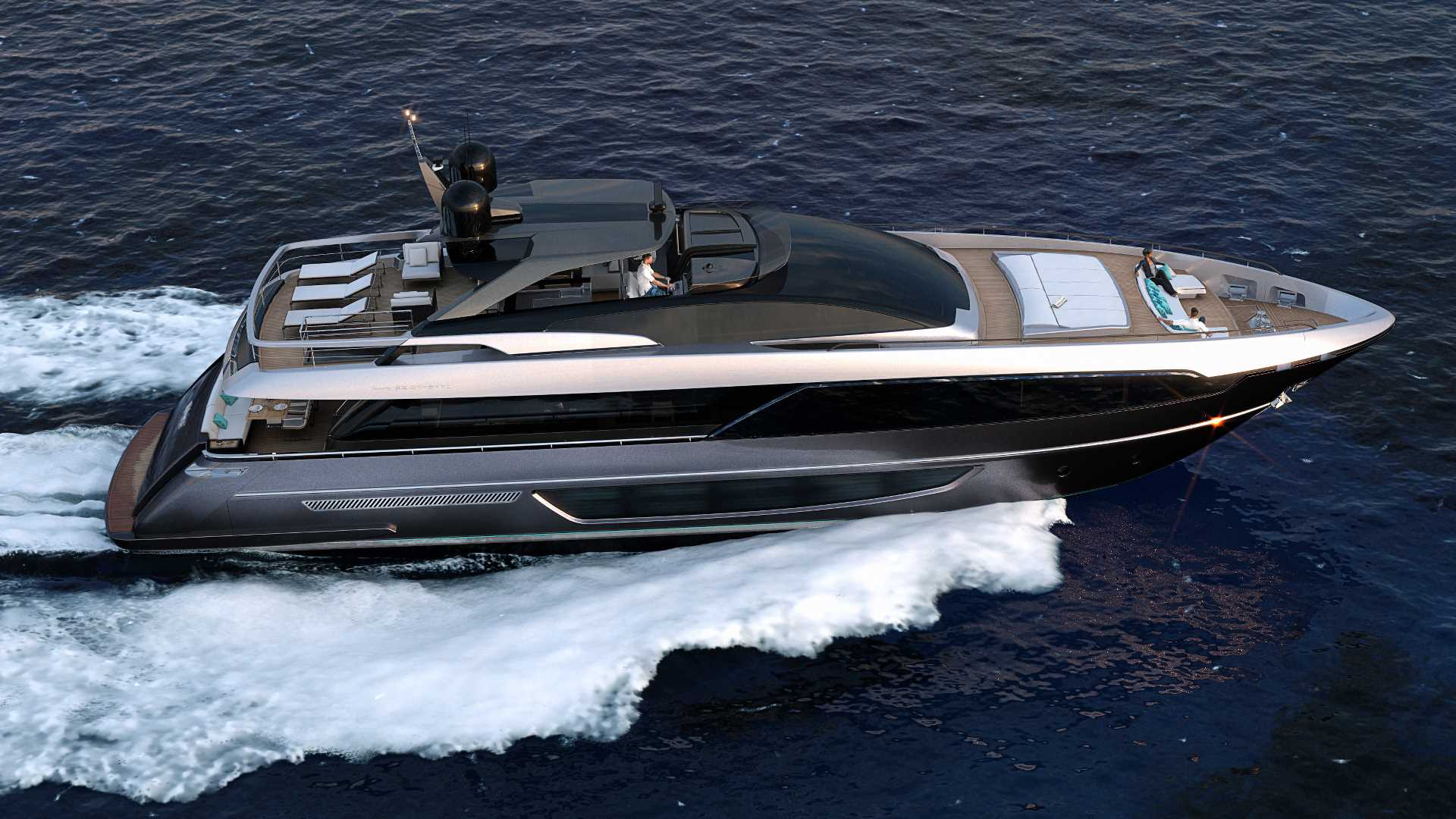 Synonymous with the beautiful Italian Lake Iseo, Riva has come a long way from their days of building racing boats. Part of Ferretti Group, Riva has just launched their 100’ Corsaro maxi flybridge. Built at the La Spezia shipyard on the Italian Riviera, she will become the first Riva to debut in Asia when officially unveiled in Hong Kong later this year. A very fitting tribute, as the first model has already been sold to a client in Asia.

At 98.1 feet, Rivas don’t get much bigger. This flybridge superyacht has five large cabins. The extra-wide master suite can be found at the fore of the main deck, while you’ll have to venture one level down to find the remaining four guest cabins and three crew cabins. The guest cabin layout available is three doubles and one twin, all en-suite. It’s amazing how Riva is able to build such a large yacht while still retaining its sporty Italian charm. As with most flybridge yachts, there’s a lot of useable outdoor space. You’ll find plenty of entertaining and sunbathing space outside on the fully-customisable sundeck, though the main deck also makes for an excellent outdoor dining option.

The 100’ Corsaro isn’t lacking in the power department, thanks to its two engine options: the reliable MTU 16V 2000 M93 or the more robust MTU 16V 2000 M94. The former provides a cruising speed of 24 knots and tops out at 27 knots, and can get you from one tropical island to the next in a hurry. The latter will provide two more knots on the top end and one more on the cruise.

So should you line up for the latest Riva? Well, the brand’s ability to take the sleek and sporty beauty of the classic Aquarama and incorporate its looks and soul into an almost 100-foot superyacht is pretty impressive. As the brand expands with the assistance of its parent, the Ferretti Group, a lot of opportunities lie ahead, especially in the East.

Italy superyacht Riva Riva 100' Corsaro flybridge Ferretti Group
Shatricia Nair
Managing Editor
Shatricia Nair is a motoring, watches, and wellness writer who is perpetually knee-deep in the world of V8s, tourbillons, and the latest fitness trends. She is fuelled by peanut butter and three cups of coffee a day.
Motoring Wellness Watches Beauty Style
Sign up for our newsletters to have the latest stories delivered straight to your inbox every week.