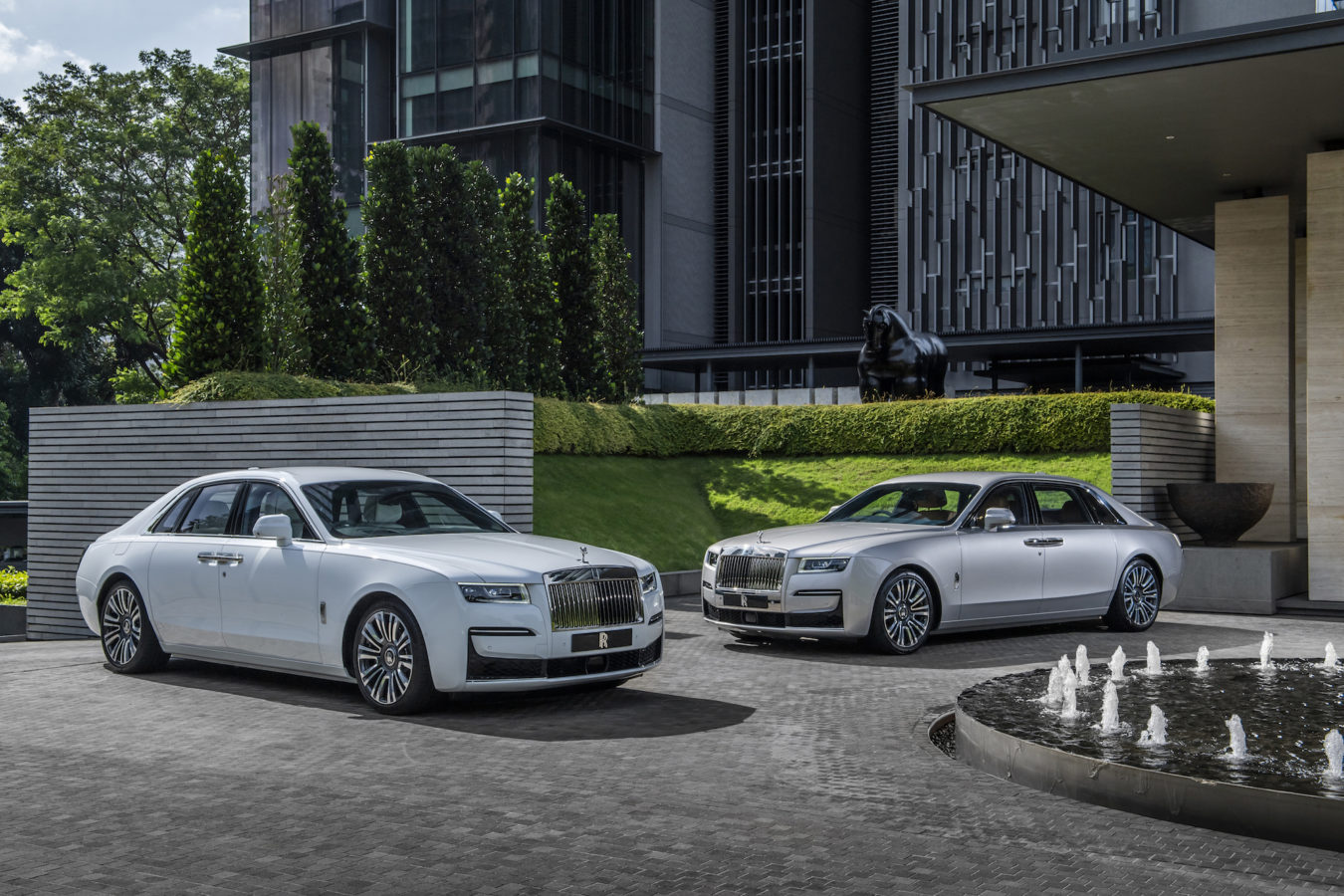 ‘Luxury’ might be a word that’s thrown around loosely today but a handful of carmakers like Rolls-Royce are still dedicated to keeping true opulence on the roads.

The Ghost embodied this dedication when it was first unveiled in 2009, even though it was intended as a smaller, more measured car as compared to other stablemates like the Phantom.

11 years later, there’s still nothing entry-level about the “baby” saloon, which had easily grown to become the manufacturer’s most desired in its 116-year history, especially with the younger crowd. Instead of a mere evolution, however, think of the new Ghost to be a revolution, one that sees big changes both inside and out. 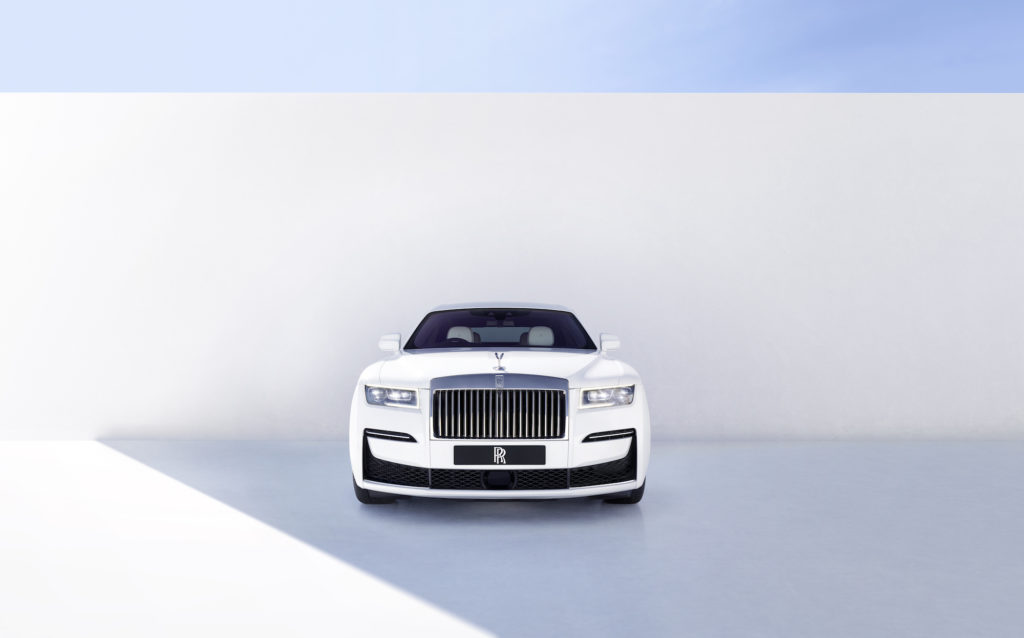 Driven by the idea of “post-opulence”, the car eschews “superficial expressions of wealth” for a more mindful, contemporary take on luxury this extreme. After all, the idea of restraint in luxury can be a concept unfamiliar to the mega-rich, so it’s extra meaningful that that’s finally been challenged and overturned — by a brand that defined opulence, no less — to prove that true class can be achieved with simplicity.

The Rolls-Royce Ghost of past shared its underpinnings with the more mainstream BMW 7 Series,  but you’ll be happy to know that save for the Spirit of Ecstasy and the umbrella that nestles within the B-pillars, everything else has changed. 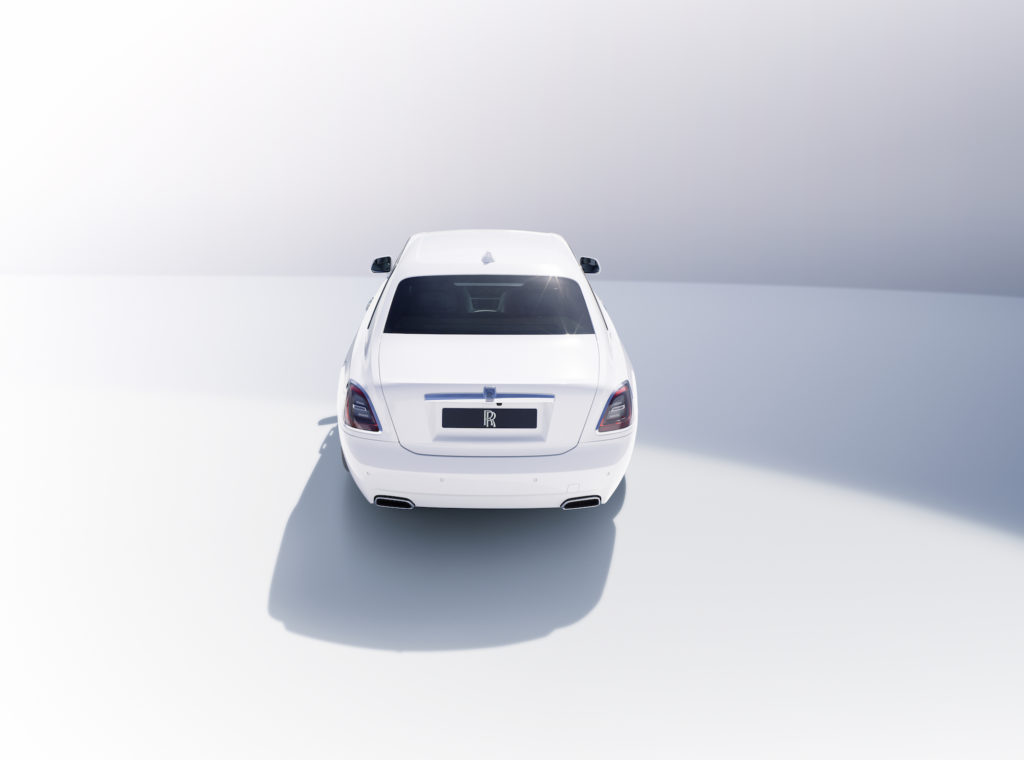 The new platform rolls on the same Architecture of Luxury that’s used in the Phantom sedan and Cullinan SUV, designed, crafted and engineered from the ground up to become the most technologically advanced Rolls-Royce yet. Instead of panel lines, the Spirit of Ecstasy now stands on her own for a cleaner and more elegant fascia. Rolls-Royces are usually big cars to take in, but achieving an uncomplicated sense of motion was the big idea when the team penciled the car’s svelte new profile, inspired by none other than the streamlined grace of boat designs.

The Ghost has always been a sublimely engineered and immensely charismatic car. The new iteration is powered by a 6.75-litre twin-turbocharged V12 petrol engine that’s ready with 563hp and 850Nm to push the hulking ride from standstill to 100kph in only 4.8 seconds.

Despite all that grunt and agility, engineers have somehow managed to keep the car whisper quiet inside to deliver Rolls-Royce’s famous ‘magic carpet ride’. The brains behind this — the ‘Planar Suspension System’ — is a complex amalgamation of self-levelling, high-volume air suspension technology, stability control, Satellite Aided Transmission, and a camera system on the windscreen that pre-empts and negates even the slightest bump or pothole even before the car reaches it.

The new Ghost is also all-wheel drive and all-wheel steering, with a 50/50 weight distribution for a peerless ride, whether you’re cruising or challenging the car around a tight corner. 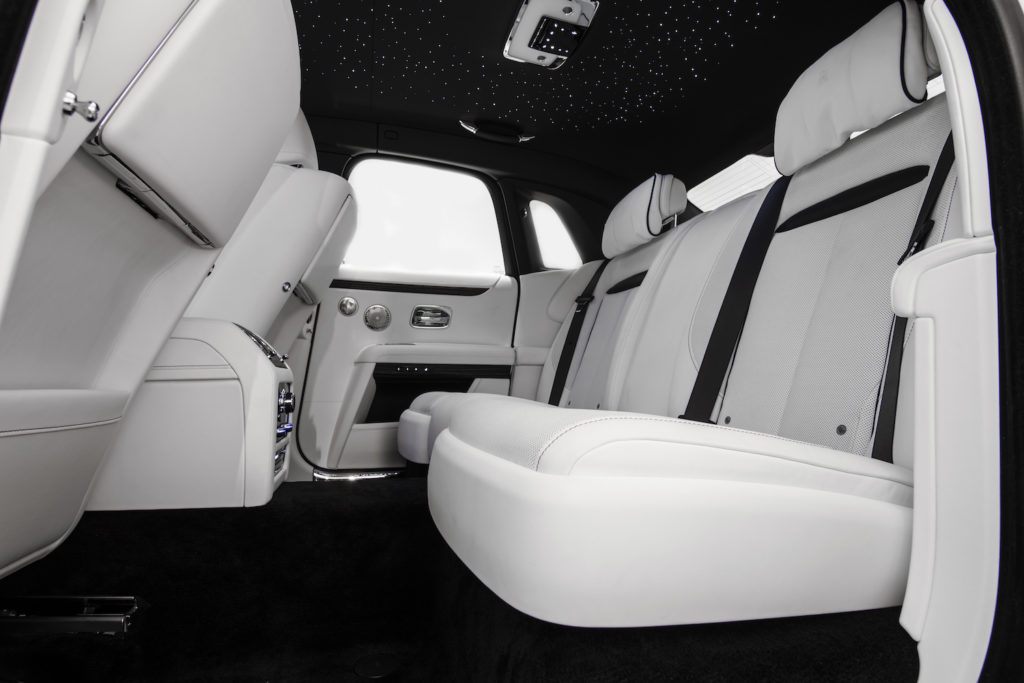 In typical Rolls-Royce fashion, the new Ghost is replete with cherishable details within, with knobs, switches, and surfaces crafted from quality materials. To put things into perspective, 20 half hides were required to make the 338 panels on the interior of Ghost’s suite, finished with complex stitchwork that only an artisan could pull off. 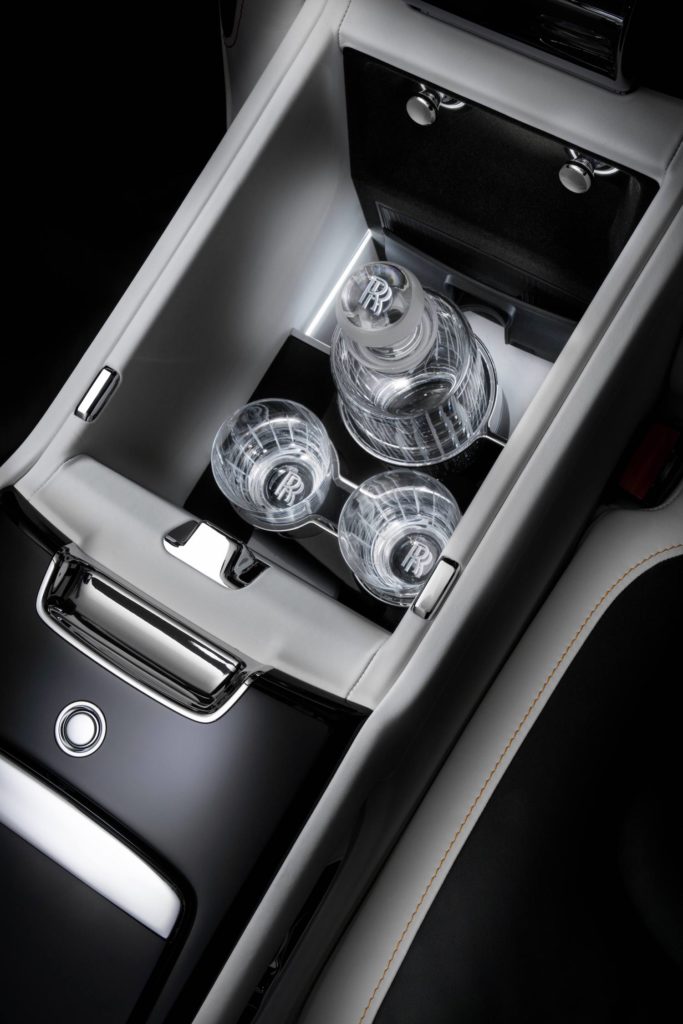 The Starlight Headliner, as always, is a real sight to behold, but more so with the new illuminated Ghost fascia, which takes pride of place in the suite with more than 90,000 laser- etched dots across the surface. Meanwhile, real wood and polished metal accents find their way throughout the rest of the car, which sets the scene for other accoutrements like the Champagne fridge — developed with a Master Sommelier, no less — that chills your bubbly at either six or 11 degrees, the optimum serving temperatures for non-vintage and vintage Champagne respectively. 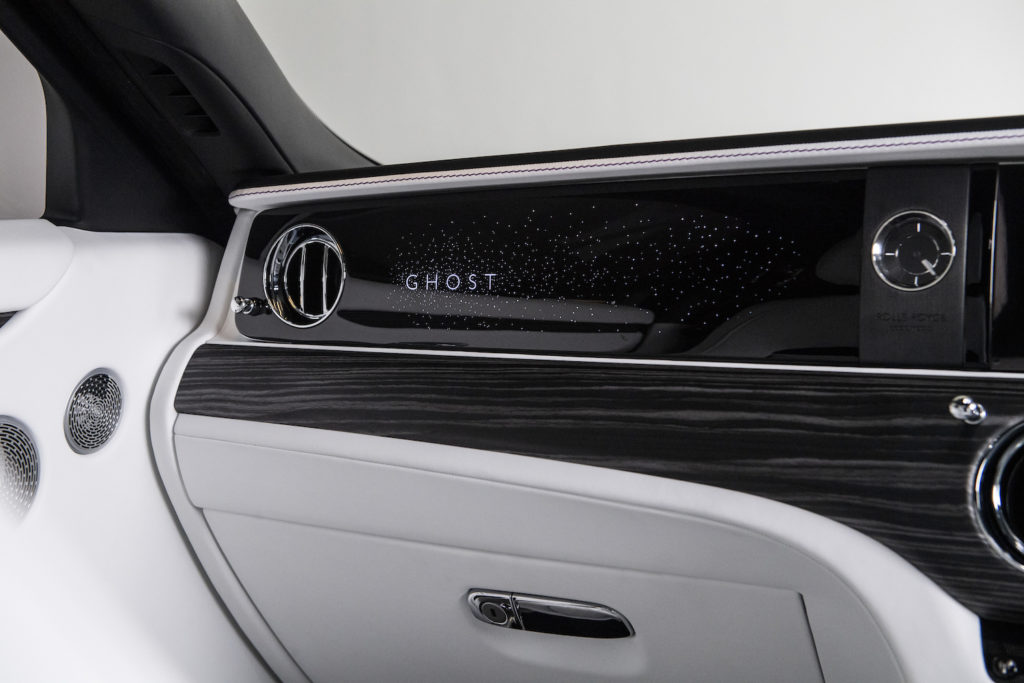 The bespoke audio system also has a resonance chamber within the body’s sills now, effectively turning the car into a giant, moving sub woofer. One can only imagine what the music experience would be like with the sound studio, which, in Bespoke Audio form, comprises an 18 channel, 1300W audiophile grade system. Elsewhere, an ultra-sensitive Micro-Environment Purification System is busy detecting airborne contaminants, and automatically switches the air-conditioning to recirculation to purge the Rolls-Royce’s micro environment in less than two minutes if any has been found.

If the rear is where you’ll be at the most, the Ghost Extended offers 17cm more space than Ghost, providing more rear legroom than any four-seat sedan in its segment. 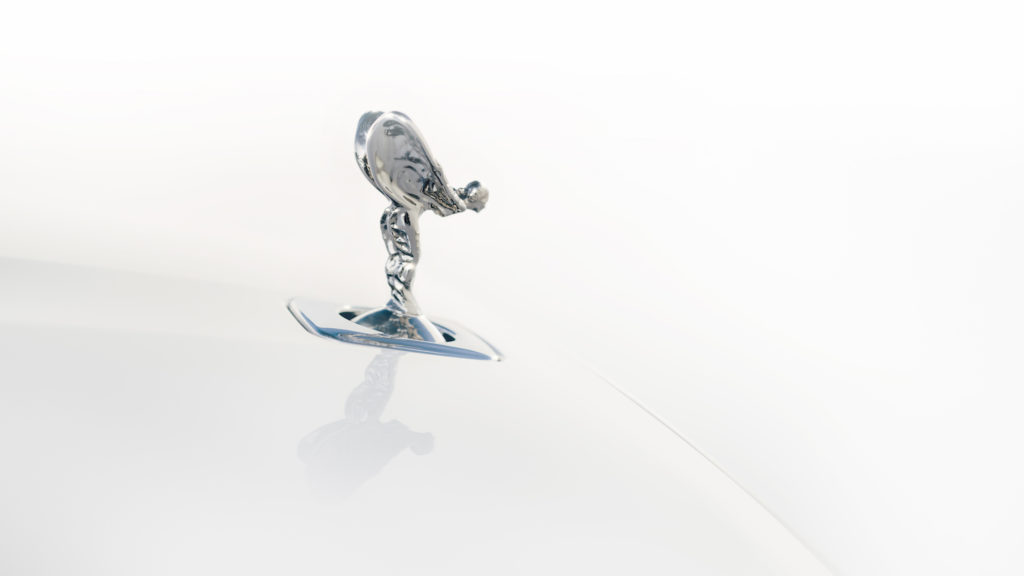 Few cars have transformed the art of driving quite like Rolls-Royce has, and the new Ghost is set to take this legacy further. Less had never been more when it came to luxury, but the Ghost has finally proven that opulence doesn’t have to be over-the-top or blindingly gaudy. Beauty can too come from simplicity.

Rolls-Royce Motoring Rolls-Royce Ghost luxury saloon New cars 2020
Shatricia Nair
Deputy Editor
Shatricia Nair is a motoring, watches, and wellness writer who is perpetually knee-deep in the world of V8s, tourbillons, and the latest fitness trends. She is fuelled by peanut butter and three cups of coffee a day.
Motoring Wellness Watches