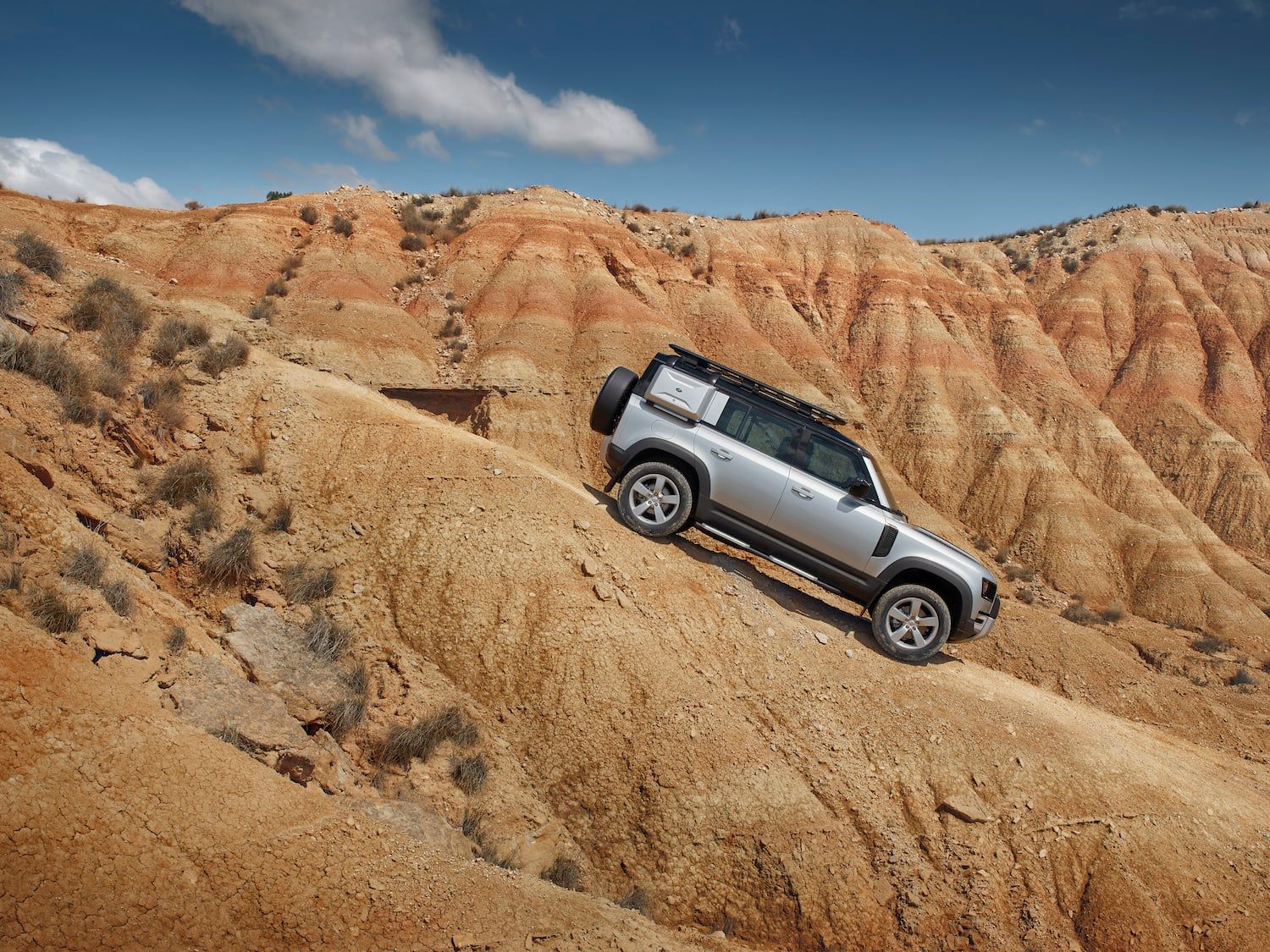 The countless times this redesigned SUV has been discussed, leaked, and then teased has been almost excessive, but Land Rover has finally released this legend back onto roads and into the wild outdoors.

So much can be said about the Land Rover Defender, which has had such a rich legacy for the last 70 years of its existence. The British 4×4 first launched at the Amsterdam Motor Show in 1948 to astounding success, becoming one of the most revered land cruisers the industry has ever seen. As the poster child for sturdiness, it found itself in many of the world’s military forces, taking on wars and humanitarian aid without so much as a glitch.

Today, the new Defender is a celebration of this authenticity while resisting the urge to be a direct reincarnation of the original. It was an amazing vehicle, but by the end it was famously behind the times, which explains its untimely discontinuation in 2016 when it couldn’t meet tightening EU emission regulations and pedestrian safety concerns. Three years later, the British marque promises that its icon hasn’t been more well equipped for the 21st century. Yet it’s a notoriously difficult road to take; on one hand it must still lend a sensible utility, and on the other, be an object of desire to the affluent. Only a few have managed this tightrope and Mercedes-Benz’s G-Wagen currently sits at the top of the league with plenty to spare.

So what we have today is a SUV that retains its famous boxy lines with a few new modern lines and technology. To start, the new Defender rides 0.8 inches (2cm) higher off the road and comes equipped with a camera beneath so drivers don’t have to second guess the terrain they’re taking on. Those who have been following the teases and spy shots would know by now that Land Rover has put it through some serious paces, stating that the test regime far exceeds that of any other model it’s produced. Then there’s its run with wildlife preservation group Tusk Trust in Kenya, and more recently, in Dubai with the Red Cross.

Its proportions are optimised for its unique personality too. Minimal overhangs allow for better approach and departure angles, which translates to the ability to overcome steep obstacles and rough terrain. It might take on a curvier silhouette but the Defender still looks as indestructible, with the same grille details, alpine windows and floating rear pillars. While the old Defender 90 and 110 were available with either a 90 or 110-inch wheelbase, the new version will be slightly larger at 101.9 and 119-inches respectively.

“We’ve embraced Defender’s stunning capability and minimalistic, functional interior to reinvent the icon for the 21st century. New Defender gives us the licence to do things differently, to push the boundaries and do the unthinkable, without ever losing the character and authenticity of the original.”
Nick Rogers, Executive Director, Product Engineering for Jaguar Land Rover

Inside, the car tells the same story. There are functional elements throughout that lend an air of toughness, such as the magnesium alloy dash, the grab handles you could actually push the car with, and shelves which will probably tolerate a baby elephant. Everything’s gone digital though; there’s more connectivity and driver assistance than ever before, which really is a selling point for the millennial clientele Land Rover is trying to seduce. A number of trims and design options are also on the menu, depending on what you’re planning to put this car through.

Still, it is the engineering that sets this new Defender apart from the rest. The D7X platform that it rests on sees a new aluminium monocoque and independent suspension. The former sees over 90 percent of its parts that are new with more than three time the stiffness, while the latter is a resilient work of art, having passed the test of being driven at a 20cm kerb at 40kph repeatedly.

The permanent four-wheel drive will wade through muddy ditches of up to 90cm, and it’ll take on up to 168kg on the roof, which means you’ll be able to tie your alarmingly annoying children up there for a more pleasant road trip. When stationary, that space will hold a tent, thanks to a static roof load of 300kg. It’ll tow 3,500kg without stuttering, and with an optional integrated front bumper winch, it’ll rope-pull 4,500kg.

The Configurable Terrain Response also makes its debut on this Defender, enabling the fine-tuning of settings to suit conditions more precisely.

Powertrains are, of course Land Rover’s best. At launch, the petrol line-up will comprise of the four-cylinder P300 and the more powerful mild-hybrid turbo straight-six with an electric supercharger. The latter will be good for 400hp and 0-100kph in 6.4 seconds. Diesel options are 200hp and 240hp at launch, while a plug-in-hybrid version is expected to be ready in 2020.

“This is a new Defender for a New Age. Its unique personality is accentuated by its distinctive silhouette and optimum proportions, which make it both highly desirable and seriously capable – a visually compelling 4×4 that wears its design and engineering integrity with uncompromised commitment,” said Gerry McGovern, Land Rover’s head designer.

The Defender has always been a beloved icon, for better or for worst, and this might just be what the firm needs to make the badge truly great again. Let’s hope Land Rover’s got it right this time.

Motoring Luxury Cars Land Rover SUV Land Rover Defender
Shatricia Nair
Managing Editor
Shatricia Nair is a motoring, watches, and wellness writer who is perpetually knee-deep in the world of V8s, tourbillons, and the latest fitness trends. She is fuelled by peanut butter and three cups of coffee a day.
Motoring Wellness Watches Beauty Style
Sign up for our newsletters to have the latest stories delivered straight to your inbox every week.