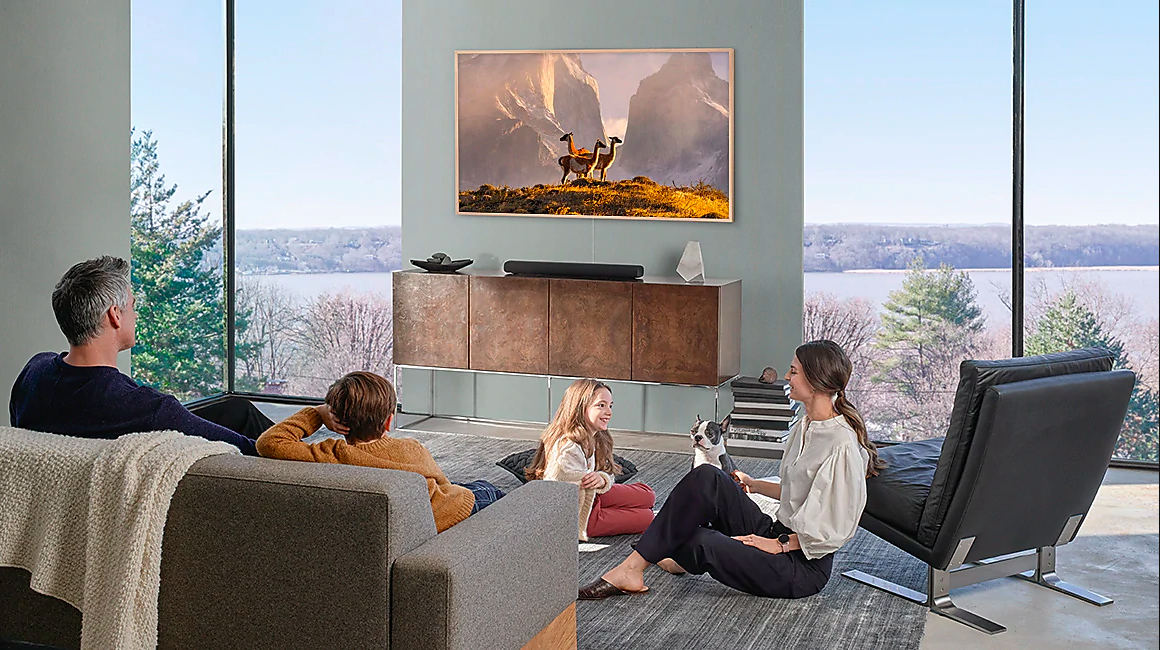 Gear
Review: Samsung’s The Frame TV redefines art and technology for the home
Share this article
Next article

The Frame TV from Samsung is one of its latest inventions, bringing both art and technology to life.

By now, I’m sure everyone knows about Samsung and its flagship smartphone devices, the Galaxy S and the Galaxy Note series. It’s what put them on the map by combining innovative technologies with ground-breaking designs. But this isn’t about the Samsung Galaxy smartphones; instead, we’ll be focusing on its consumer electronics. More importantly, its much-touted QLED lifestyle TVs.

Samsung’s The Frame is one of three in the entire collection, which also features the Serif and the Sero. Samsung has taken a more modern approach with its TVs, giving it a bigger personality with the help of artificial intelligence. Seeing as it’s hard to tell a TV apart because it all looks very similar, Samsung also gives it a touch of flair to ensure it stands out from the crowd.

Having had this TV for almost a month now, I can safely say that there is nothing I want more than to come home and sit in front of it for hours on end.

Straight out of the box, you’ll find that it’s pretty straightforward to set up The Frame. It’s also worth noting that an extra pair of hands would be the safest bet; you wouldn’t want to be dropping a TV that can go up to RM10,000 or more depending on accessories. Be sure to also plan on where you want to set up The Frame due to its large footprint.

Thankfully, Samsung gives you plenty of options on how you want it to be set up. The standard option would be with its two-legged stand on opposing ends of the TV. Of course, one can always opt for a no-gap wall-mount or even its studio stand, which resembles an easel.

What’s great about The Frame is that it doesn’t require a lot of cables; it only has a single cable that can be hidden and tucked behind the TV to give a seamless, clean, and clutter-free look. The said cable is connected to the OneConnect box that is essentially the heart of the TV. This is where you will find all your HDMI ports and such, allowing The Frame to truly shine.

Given how Samsung places heavy emphasis on its designs, it’s no surprise to find that The Frame is a strikingly beautiful TV. Unlike the brand’s other TVs, The Frame is all about putting design and aesthetic first. The entire body of The Frame is made of polished black metal, which gives it a very clean and contemporary look. But if that’s not what you’re looking for, you can also customise the bezel to match your decor. To sweeten the deal, these add-on accessories are magnetic so all you have to do is simply fit them into the right sections and voila.

But the actual reasoning behind its design has to do with its name. The Frame very much resembles a work of art; an art piece that you will proudly hang on your wall. With its no-gap wall-mount, The Frame will blend seamlessly into your home when placed on the wall. But how do you get it to resemble an art piece?

The Frame uses Samsung’s Tizen operating system, the same OS you will find on the Galaxy Smart Watch. From the moment you turn it on, The Frame provides you with a user experience like no other, making it easy and effortless when you’re trying to watch TV. With The Frame, you’re now able to set screen savers that are artworks so whenever you’re not using the TV, it literally looks like an art piece hanging on your wall. This is known as Art Mode.

But that’s not all.

With the SmartThings app, you can also set The Frame to blend in with its surroundings. For example — my house has dark beige walls and with a simple picture of The Frame’s background, it was able to recreate the colours of the walls in my house to be the screen saver.

One Remote Controls All

The remote you get with The Frame isn’t like your traditional device. First off, it comes in a soft white colourway with two silver knobs for the channel and volume buttons. It also has a dedicated button for Netflix, Amazon Prime Video, and HBO Go, making watching movies and series so much easier.

What’s great about the remote is that it can act as your universal remote moving forward. If you have a gaming system like a PlayStation or an Xbox, you can now tune the remote to give you direct control over it. It even works with your TV boxes but unfortunately, it doesn’t work with Astro. However, it does support various other satellite TV boxes from America.

Another notable feature of the remote is its direct access to Art Mode. Simply press on the power button once to switch to Art Mode and holding it down for three seconds turns The Frame off. The remote also features a built-in microphone if you ever intend to use Bixby as a voice search.

Having had The Frame for over a month, it’s safe to say that I was spellbound from the moment I first turned it on. For starters, it made watching movies and TV series so easy with a wide range of options to choose from. Aside from the three streaming partners mentioned, YouTube, as well as Apple TV, are also readily available with The Frame.

Moving on to its picture quality, you’ll be glad to know that The Frame is fitted with Samsung’s new Quantum Processor 4K. This allows for greater upscaling to 4K, which means that whatever you watch will be in 4K-like quality. The Frame also comes with QLED panels, allowing you to get the truest blacks and the crispest whites in whatever you’re watching. HDR10+ is also readily available on the TV, which makes shows from Netflix and Prime Video that much better.

I put this to the test with a myriad of shows from different streaming platforms and the results didn’t vary much. Putting on ‘Black Mirror’ from Netflix was a joy to watch even if I have seen it countless times; catching up with ‘The Boys’ on Prime Video made action sequences all the more enjoyable thanks to the Picture Clarity mode; ‘Game of Thrones’ on HBO Go was thoroughly enjoyable even amidst its usually dark setting, and even Apple TV with its 8-part series of ‘See’.

Colours were bright, vivid, and full of life from start to finish, no matter what you were watching.

The only downside I could find with The Frame was when I was gaming with my PlayStation 4. Even with Game Mode turned on, The Frame will still stutter and lag, especially if it’s on games that require a lot more processing power like Red Dead Redemption 2 or even Call of Duty: Warzone.

There are two sizes for The Frame — 55- and 65-inch. We were lucky enough to have the 65-inch for our review to really put it to the test and thankfully, it passed with flying colours. The one major difference between both sizes though is its price. At 55-inches, you’ll be paying RM6,479 while its 65-inch is at RM10,749.

While the latter may be a bit too much given the current global pandemic, the 55-inch is more than enough to satisfy your home. It still carries all the same features and specs in just a slightly smaller frame. But when it’s all said and done, a smart TV is a necessity in one’s home given its future-proof technology that will only get better with time. If you’re worried about whether it will fit into your home decor, fret not as Samsung has got you covered with its accessories.

Even if that isn’t enough, The Frame is smart enough to ensure it fits into your surroundings.

All images courtesy of Samsung.

Samsung Tech smart tv the frame
Wi-Liam Teh
Senior Writer
Wi-Liam is a geek at heart with a penchant for tattoos. Never without a drink in hand (preferably whisky, gin, or Guinness), he is also a writer by day and a keyboard warrior by night. On his day off, he masquerades as a streetwear and sneakerhead enthusiast while his bank account says otherwise.
Tech Cars Watches Entertainment Food Drinks