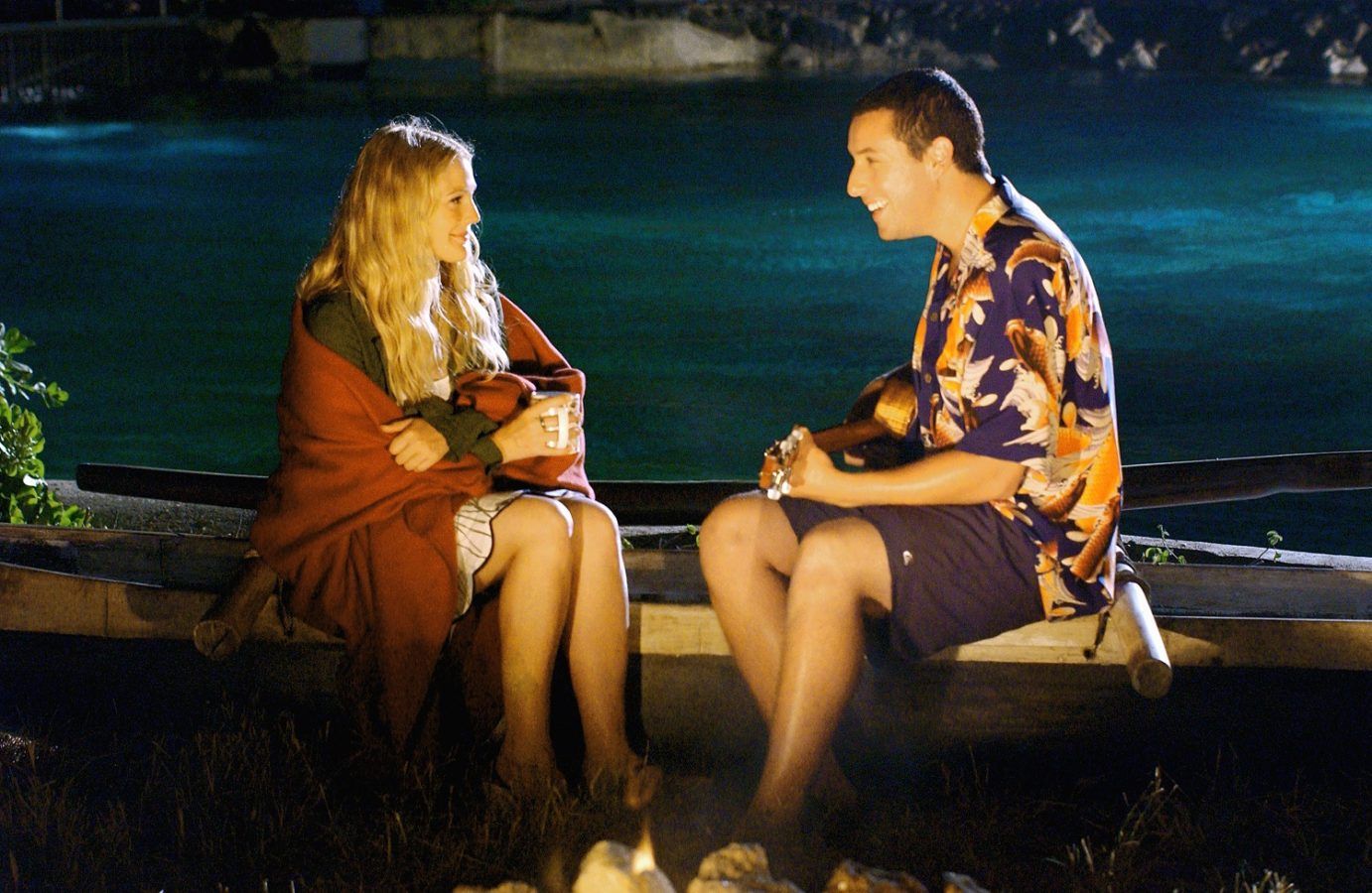 12 romantic movies to cosy up with this Valentine’s Day

Snuggle up with your partner this Valentine’s Day by tuning in these romantic movies.

Love is an emotion that should be celebrated every day, but there is one day when people go all out for their loved ones, especially couples. Valentine’s Day, celebrated annually on 14 February, is a special day for the romantics around the world.

From dinners to travel plans, people find a variety of ways to spend time together. One of the options is to cuddle up on the couch and binge-watch some of the most romantic movies of all time. Fancy a good K-Drama tear-jerker? Check out our list of the most romantic Korean shows herehere.

Films and the idea of love story

Love is strange; it can be expressed in many words and can be conveyed without uttering a single syllable. It is a feeling that is felt by almost everyone, but its true meaning is understood by those who genuinely want to know it.

For decades, cinema has been conveying the meaning, message and methods of love through changing times. It has encouraged lovers with stories of timeless romances and left their hearts shattered by the tragic fate of star-crossed lovers. Truly, nothing has captured the idea of romance better than films.

While there are many movies that celebrate love in all forms, some are true classics. So, what are the best Valentine’s Day movies to watch? From the oh-so-happily-ever-afters to those evoking feelings for a lost love, here are some unforgettable gems to stream with the one you love.

Estranged childhood friends Marcus and Sasha have a chance meeting in San Francisco 15 years later from the last time they saw each other. While Sasha is a successful restaurateur, Marcus is getting by as a musician. Their meeting triggers their suppressed attraction for one another, but they are also reminded of bitter memories.

Directed by Nahnatchka Khan, the film stars Ali Wong and Randall Park as the main leads. It was received with critical acclaim following the premiere, especially because of its seamless blend of Asian-American cultural commentary in a rom-com.

Bridget Jones’s Diary is over 20 years old, but it continues to find a place in the list of romantic comedy movies to watch on Valentine’s Day. Renée Zellweger received an Oscar nomination for Best Actress in a Leading Role for playing the titular character of Bridget Jones.

At the age of 32, Jones decides to take control of her life. She starts noting her thoughts and everything that has been happening in her life in a diary.

Enter Mark and Daniel — two handsome men out to win her heart.

Jones continues pouring her heart into the diary while trying to understand which one of the two is her ‘Mr. Right’. Confusions, heartbreaks and hilarity ensue as her diary becomes a centrepiece of her love, life and adventure.

The film is based on the 1996 novel of the same name by Helen Fielding. Mark is played by Colin Firth, while Hugh Grant essays Daniel’s role. The film has been followed by two successful sequels — Bridget Jones: The Edge of Reason (2004) and Bridget Jones’s Baby (2016).

The film adaptation of Nicholas Sparks’ 1996 novel of the same name revolves around a couple, Noah and Allie, in the 1940s. As World War II and class differences create turmoil in their lives, they attempt to start anew.

The name refers to a notebook that Allie kept to remember the time spent with Noah, which would later become the single most important emotional thing in their lives.

This love story presented by New Line Cinema, stars Ryan Gosling and Rachel McAdams as Noah and Allie, respectively, along with James Garner and Gena Rowlands, who portray their aged counterparts.

The Big Sick is loosely based on the real-life romance between Kumail Nanjiani and his wife Emily V Gordon. It explores how Nanjiani, a Pakistani-born comedian, and Gordon, an American, deal with cultural dissimilarities as they try to build and strengthen their relationship.

Nanjiani plays a fictional version of himself, while Gordon is fictionalised as Emily Gardner and played by Zoe Kazan. In the film, Nanjiani is forced to confront the challenges of love for Gardner after she contracts a mysterious illness.

Directed by Michael Showalter, The Big Sick is written by Gordon and Nanjiani. It was praised universally by critics and received an Academy Award for Best Original Screenplay.

This is one of the classic Valentine’s Day movies that portrays never ending love no matter the circumstances. Lucy is suffering from short-term memory loss, a condition that makes her unable to remember things from a day before. Henry, a veterinarian who falls in love with her, decides to continue wooing her every day, hoping she would remember him. That is not all; he has to convince Lucy’s loving family that he is doing all that only because he truly loves her.

The film stars Adam Sandler and Drew Barrymore as the leads. Though it received mixed reactions from critics, the film is one of the sweetest love stories for those who love a mushy romance with a dash of comedy.

Considered as one of the most acclaimed romantic films of all time, The Princess Bride is based on William Goldman’s 1973 novel of the same name. The story is a fairytale adventure in which a princess in distress is saved by her lover.

A farmhand named Westley is in love with the beautiful Buttercup. But fate separates the two. Years later, Buttercup is forcibly taken away by the nefarious Prince Humperdinck, who has a dangerous political plan up his sleeve. Westley returns as the Dread Pirate Roberts to save his love. Meanwhile, where anyone could be a foe, Westley finds two heroic allies — the swashbuckling fencer Inigo Montoya and a giant named Fezzik.

The film is directed by Rob Reiner and stars Cary Elwes as Westley, Robin Wright as Buttercup, Chris Sarandon as Prince Humperdinck, Mandy Patinkin as Inigo Montoya and wrestling legend André the Giant as Fezzik.

Willy DeVille was nominated in Best Music, Original Song category at the 1988 Academy Awards for the song “Storybook Love” in the film.

Former US President Barack Obama and former First Lady Michelle Obama continue to rule over the hearts of their supporters for upholding the dignity of the White House and the beauty of their personal lives.

Southside With You is a biographical romantic movie based on Obamas in their youth. Barack is shown as a young law associate who tries to woo Michell Robinson, an attorney, in Chicago in 1989. The film is a must-watch for those who want to know how one of the world’s most powerful couples met and the ensuing romance at the time.

Sleepless in Seattle is one of the best Valentine’s Day movies ever made, and there are many reasons for it.

Next, it is a beautiful story. Jonah, the young son of a recently widowed Sam, calls up a talk-radio programme in Seattle, asking them to find a partner for his father. Meanwhile, Annie, who is engaged and lives in Baltimore, has just tuned in to the radio and listens to Jonah speak, before Sam reluctantly gets on the line only to pour out his feelings.

Something appeals to Annie’s soul and as time passes, she cannot get Tom off her mind. Like many other women who had written to Sam after the radio-talk show, Annie sends a letter to him, requesting a meeting on Valentine’s Day at Empire State Building in New York City.

The light romantic film was nominated for two Oscars — Best Music, Original Song and Best Writing, Screenplay Written Directly for the Screen. It was also nominated in the Best Motion Picture – Comedy or Musical category and two others at the Golden Globes.

To millions around the world, Roman Holiday is a classic rom-com, starring the stylish Audrey Hepburn and inimitable Gregory Peck who continue to woo generations of classic film lovers and die-hard romantics to this day.

It follows a European princess, Ann, who slips away from her country’s embassy in Rome to have a fun night by herself. A series of events lead to Ann’s chance meeting with American reporter Joe Bradley, who comes to know about her identity. Without telling Ann that he knows who she is, or that he is a reporter, Bradley uses this as an opportunity to get an exclusive interview with the princess. But love blossoms between the two.

The film, which marked Hepburn’s Hollywood debut, is especially noteworthy for capturing some of the most beautiful spots in the city of Rome, including the Piazza di Spagna. Certain scenes, such as the one in which Hepburn navigates the streets on a Vespa scooter with Peck riding pillion, are counted among the most famous ones in cinematic history.

The Spectacular Now isn’t the quintessential coming-of-age story but one of the finest emotional romantic movies to watch this Valentine’s Day. It stars Miles Teller as Sutter Keely and Shailene Woodley as Aimee Finecky who are joined by acclaimed actors Brie Larson, Kyle Chandler, Mary Elizabeth Winstead and Bob Odenkirk, among others in various roles.

The film follows Sutter, a high-school senior who leads a carefree lifestyle and is a heavy drinker. One night after partying, he wakes up on the lawn of Aimee. Sutter is drawn to Aimee’s innocence and tries to bond with her.

Following its release, critics hailed the film for its sentimentality, performances and realistic depictions of relationships.

Julia Roberts earned an Academy Award nomination for Best Actress in a Leading Role for playing the role of a prostitute who finds true love in this one of the finest romantic comedies.

Essaying the character of Vivian Ward, Roberts is hired by rich businessman Edward Lewis (Richard Gere) as an escort for some of his business meetings in Los Angeles. Over the course of their association, Vivian falls in love with Edward.  While Edward also starts to have feelings for her, their polar opposite worlds stand in their way of being together.

The Oscar nod aside, Roberts won the Golden Globes award for Best Performance by an Actress in a Motion Picture – Comedy or Musical.

During the 1990s International Monetary Fund (IMF) crisis, two young people — Mi-soo and Hyun-woo — meet at a bakery, but the ever-changing world around them keeps them apart. Despite that, they do not give up on their struggle to find each other.

The slow burn love story is like a cauldron of emotions. It stars Kim Go-eun, one of the finest actresses in Korean entertainment, as Mi-soo. Hyun-woo is played by Jung Hae-in, who won the Best New Actor award at the prestigious Grand Bell Awards of South Korea.

Valentine's Day Netflix Movies romantic movies romance
Manas Sen Gupta
Manas enjoys reading detective fiction and writing about anything that interests him. When not doing either of the two, he checks Instagram for the latest posts by travellers. Winter is his favourite season and he can happily eat a bowl of noodles any time of the day.
Travel Culture Entertainment Food
Sign up for our newsletters to have the latest stories delivered straight to your inbox every week.