Home > Living > Film & TV > ‘Spider-Man: No Way Home’ trailer release: What we can expect to see in the Marvel movie 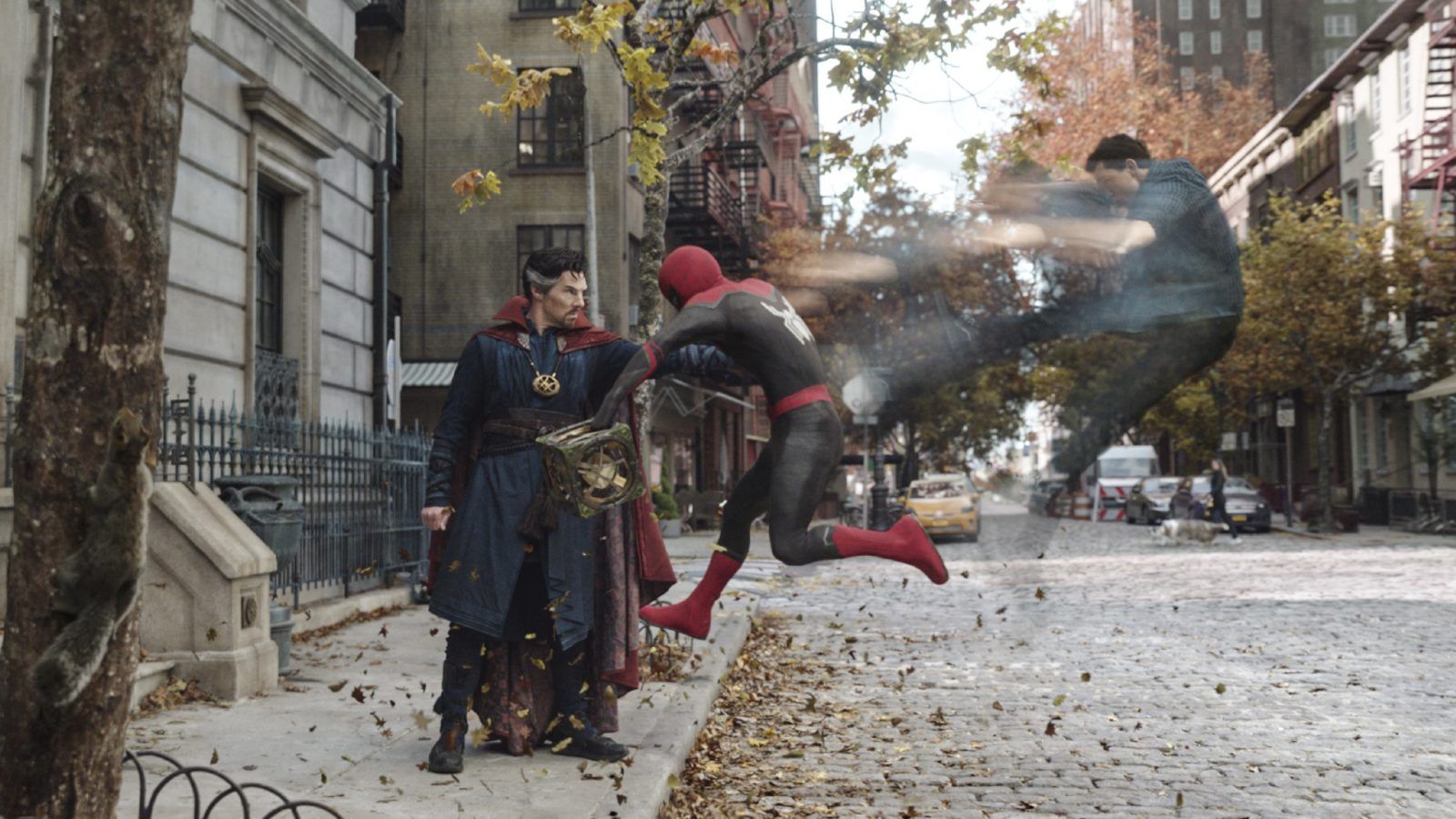 ‘Spider-Man: No Way Home’ trailer release: What we can expect to see in the Marvel movie

Living
‘Spider-Man: No Way Home’ trailer release: What we can expect to see in the Marvel movie
Share this article
Next article

The first complete trailer of Spider-Man: No Way Home has just dropped, and to say we’re excited is an understatement.

It is, after all one of the most-anticipated movies of the year for fans of Marvel Cinematic Universe (MCU). The trailer follows another teaser trailer that was released on YouTube on 24 August, which showed our friendly neighbourhood superhero swinging from the tallest of New York’s skyscrapers in a time when his secret identity had already been exposed.

Thankfully, unlike the leak scare that preceded the release of the teaser trailer, the first full trailer had a smooth premiere.

Sony Pictures had in August announced that the teaser trailer was viewed more than over 355.5 million times worldwide in the first 24 hours of its release, thus breaking the record 289 million views held by Avengers: Endgame (2019) following the release of its teaser trailer in December 2018.

Exactly 24 hours before the release of the first trailer, Sony Pictures had posted a tweet showing the reactions of lead actors Tom Holland, Zendaya, and Jacob Batalon watching the trailer on a laptop.

“T-minus 24 hours until you get to see what they’re watching,” read part of the tweet.

Ahead of the trailer release, Marvel also shared a Spider-Man: No Way Home poster which showed the wall crawler and Doctor Strange ready for battle against three iconic supervillains — Doctor Octopus, Electro, and Green Goblin.

Doctor Octopus had already been revealed in the teaser but the poster marked the first appearance — albeit at a distance — of the ruthless Green Goblin. It also showed Electro’s yellow electrical discharges.

What to expect from Spider-Man: No Way Home

First, here’s what the trailer revealed

A lot about what to expect in Phase 4 of MCU.

Some bits of the trailer were already revealed in the August teaser, which was more about Peter Parker struggling to keep his personal life intact following the events of the Spider-Man: Far From Home (2019), in which supervillain Mysterio (Jake Gyllenhaal) reveals to the world his masked identity.

The teaser showed Parker approaching Doctor Strange for help, asking him to turn back time to a point where no one knows that he is Spider-Man.

Going against Wong’s warning not to cast the spell, Strange, the Sorcerer Supreme, does what Parker asks. The result is the birth of a multiverse and the horrors it brings with it for both Spider-Man and Strange.

The trailer takes forward the consequences of Doctor Strange’s doing.

Packed with adrenaline-rushing and applause-worthy scenes, Spider-Man No Way Home trailer takes a slightly deeper look into the three villains in addition to glimpses of two more — the Lizard and Sandman. Most of the trailer screen-time, though, is dedicated to one — Doctor Octopus.

With a sinister smile and his iconic shades, the supervillain remarks upon seeing Parker, “Hello, Peter!”, much to the latter’s shock. However, the supervillain — who was aware of Spider-Man’s real identity in his own universe — is surprised to see a different face behind the mask.

It also appears that Doctor Octopus has retained some control over his own mind and is not being dictated by his mechanical tentacles. This follows the change the character underwent during the climax scene of Spider-Man 2 (2004).

We see a Pumpkin Bomb tossed in between cars on a road followed by a peal of familiar, bone-chilling laughter as Green Goblin arrives on the scene. And then there is Electro, shooting his yellow electric discharges at Spider-Man, whose suit appears to have been modified and equipped with certain special abilities.

As was in the teaser, we see Doctor Strange separating the astral form of Peter Parker from Spider-Man’s body during a struggle over an object in the sorcerer’s possession.

The multiverse and what to expect from the film

The arrival of the supervillains from the Spider-Man films from a different era in Spider-Man: No Way Home indicates that Marvel is serious about banking on the multiverse angle in the Phase Four of the MCU.

The Amazon Prime Video series Loki (2021), which expanded the concept of multiverses, was a tremendous success and it managed to handle the otherwise confusing concept very well.

Multiverse in Marvel is its version of parallel universes, a concept that exists in scientific theory. In Marvel’s world, the parallel universes have altered versions of the same entities. This is why there was more than one Loki in the 2021 TV series, each with a different appearance and powers.

The to-be-released Spider Man film will be followed by Doctor Strange in the Multiverse of Madness (2022), which, as its title clearly suggests, will dive deeper into the multiverse. Towards the end of Spider-Man: No Way Home trailer, Parker and Doctor Strange look on as a galactic tear forms over the New York night sky. When Parker asks the sorcerer what’s happening, Strange responds with a trembling voice, “They’re starting to come through, but I can’t stop them.”

Spider-Man: No Way Home certainly proves that Doctor Strange is an almost infinitely powerful sorcerer — one who can bend time and space, and open multiverses whether or not he has any control over the consequences.

As for Spider-Man? Well, Peter Parker is a smart kid who has his heart in the right place, which is why Tony Stark aka Iron Man was so fond of him. And Parker has access to Stark’s amazing technology, so he can be expected to even the odds.

This movie marks the return of three acclaimed actors reprising their roles as fan-favourite supervillains from Sam Raimi’s hugely successful Spider-Man trilogy (2002-2007) and the 2014 film The Amazing Spider-Man 2.

While Willem Dafoe is back as Green Goblin and Alfred Molina as Doctor Octopus from the Sam Raimi films, joining them is Jamie Foxx as Electro.

Benedict Cumberbatch’s Dr Stephen Strange joins Tom Holland who plays our hero — Peter Parker aka Spider-Man. The other members of the cast include Zendaya as MJ, Jacob Batalon as Ned Leeds, Marisa Tomei as May Parker, Jon Favreau as Harold “Happy” Hogan, and Benedict Wong as Wong.

Spider-Man: No Way Home is set for release on 17 December 2021. It will be the fourth film of the MCU Phase Four, which began with the Disney+ series WandaVision, aired from January to March this year.

The first film of Phase Four was Black Widow (2021). It was followed by the theatrical release of Shang-Chi and the Legend of the Ten Rings in September and Eternals in November. Alongside the films, MCU will continue to release TV series that ties up the whole of Phase Four.

The studio itself will be looking forward to the success of Spider-Man: No Way Home, especially since two of the three MCU movies released this year — Black Widow and Eternals have not performed as per expectations.

While Black Widow had an average reception, Eternals was panned by most critics even though it was directed by Oscar winner Chloé Zhao. This resulted in the film becoming the lowest-rated MCU movie on Rotten Tomatoes.

Benedict Cumberbatch marvel marvel cinematic universe Content Hub Spider-Man: No Way Home trailer Tom Holland doctor strange
Manas Sen Gupta
Manas enjoys reading detective fiction and writing about anything that interests him. When not doing either of the two, he checks Instagram for the latest posts by travellers. Winter is his favourite season and he can happily eat a bowl of noodles any time of the day.
Travel Culture Entertainment Food
Sign up for our newsletters to have the latest stories delivered straight to your inbox every week.