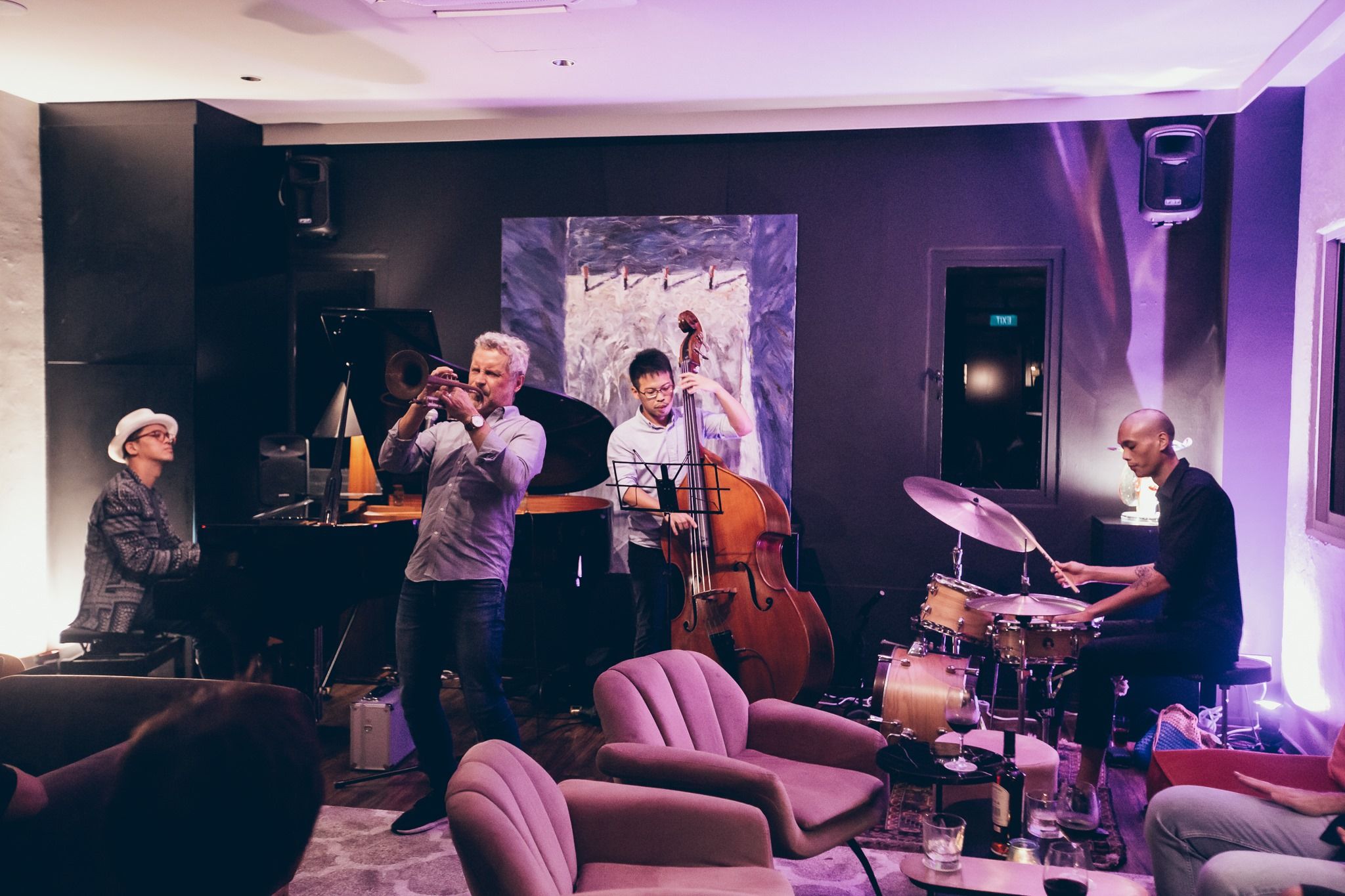 Living
The Singapore Spotlight: Tan Wei Xiang talks jazz and its flourishing future in Singapore
Share this article
Next article

Singapore has a thriving community of creatives that have been vanguards of our local culture since our independence. So in lieu of National Day and the jubilant August atmosphere, we are shining the spotlight on personalities each week this month in a series of celebratory profiles called The Singapore Spotlight.

It was almost happenstance that Tan Wei Xiang was initiated into the jazz industry. A law student playing the trombone on the National University of Singapore’s jazz band, he filled in on the piano when the pianist didn’t show up one day, and two decades later his resume reads like a musician’s pipe dream. On top of being the Associate Music Director for the Jazz Association of Singapore and a lecturer at the LASALLE College of the Arts, Tan also hosts a weekly open mic jam session called 1819 Tuesdays at the listening lounge Maduro.

But it hasn’t always been Singapore first for Tan, as shortly after finishing his law studies, he left for New York City to pursue his masters, and it was there he formed his “complete musical family” as he affectionally calls them. But a greater sense of responsibility to Singapore beckoned him home, in part to teach the next generation how to navigate the path towards being a musician while avoiding some of the pitfalls and obstacles that he encountered during his career.

We recently had the opportunity to sit down and pick Tan’s brains on the jazz scene in Singapore, how it has evolved, and what the future of this genre looks like on our shores.

How have the 1819 Tuesdays sessions been so far?

It’s been really fantastic because it provides a platform for younger jazz musicians to come out and share and connect with fellow musicians. They can also connect to a larger audience, therefore building up their own personal network. One of the rules we have is that we always have fun. So we laugh at each other’s mistakes, we smile a lot, and it rubs off on the audience as well. The audience enjoys the camaraderie and seeing and hearing musicians enjoy themselves on stage. That’s one of the core principles we have for the sessions.

Do you ever get stage fright?

I actually do. I got stage fright sometime last year, and that is coming from somebody who has played to an audience of thousands. I was performing a classical piece, it was completely out of my oeuvre, and I completely froze. People told me that it sounded fantastic, but I don’t trust them. (Tan lets out a chuckle here) But still, with my concepts of jazz, I’m a lot more forgiving with mistakes. I take the view that mistakes are the first step toward eventual beauty. It’s not that I go out of my way to make mistakes, but if it happens I tend to be kinder to myself, and I forgive myself, and I move forward to something more positive.

Do you think the younger generation are getting more into jazz?

We’re going through a revival of sorts. There wasn’t much of an influx of jazz musicians until very recently, and it’s been like a huge renaissance because there are so many young jazz musicians that play at such a high level. Most of them can basically fly their wares at an international level when they’re 22, and that’s quite amazing. From the viewpoint of somebody that has been here for a very long time, I’m very happy at how the jazz scene has developed, and the infrastructure is developing such that it actually enables and encourages young musicians to take our art form seriously.

Why do you think this renaissance is happening now?

There’s a gradual recognition of jazz as an art form which is serious, I suppose. It’s not trivial music, and to be an exponent of the art form you have to spend many, many years before you step on the stage perfecting your skills as a musician. So there’s gradual recognition of the amount of effort, blood, and sweat that it takes to be a professional jazz musician. At the same time, this music is very accessible and usually presented in an informal environment, which makes it a lot more palatable to most people.

How would you compare Singapore’s jazz scene now compared to when you started?

It has changed quite a lot. As far as standards go, we have somehow accelerated our musical growth to a state where there’s a very strong number of musicians who are able to perform in any country. When I left New York 10 years ago, I was thinking that I will say goodbye to being able to play music at such a high level. But I just did a concert last week with all Singaporean musicians and I found myself reliving this really high level of musicality again, and I was very overjoyed.

Does it make you feel alive?

It does. If anything, it kind of vindicates what I’ve been doing for the past 10 years ever since I came back. A big part of what I do is educate the youth in the ways of jazz. And right now we are beginning to see the fruits of our labour, and that makes me very happy.

What are some of the obstacles a jazz musician will face?

There are so many! From a technical standpoint, every good jazz musician is supposed to be a technical virtuoso. You are supposed to have complete control over your instrument, and that is something you do behind closed doors. That’s one thing that most people don’t really quite see. Every note we play is the result of many hours, many days, many weeks, many months, many years of practice. It’s a distillation of a lot of effort.

The second thing would be what do we do with this technique. We can’t just mindlessly spew out notes just because we can. We have to have an aesthetic, taste, and an understand about the grouping of notes and tones and rhythms into something cohesive It has to be like a story so that it can actually draw people into what we’re doing. Similarly, this requires many years of deliberation, of meditation, of introspection, of research, and of discovery to get to a point where you can have enough confidence to assert what you say and to stand fast behind your assertion.

Third, you have your real-life worries. Questions like how do I make a living, how do I provide for my family, will I ever reach retirement, do I retire, will I have work in the future? Bread and butter issues like that really do affect musicians. I’m not saying that jazz musicians are the worst of the lot, but we all go through that. It really takes a very special person to be good in this art form because you need a confluence of many different ideal situations of ideal viewpoints, physicalities to be able to produce a great musician. It’s kind of rare, and it’s really surprising that we have that in droves in Singapore.

How do you think jazz can thrive in Singapore, and what other things can be done to help grow the scene locally?

The important thing, at least for me, is that everything is born out of enjoyment, of fun, of the sense of discovery. So when you come to an 1819 session, you will find that the musicians are really having fun, they’re laughing at their own mistakes. We embrace mistakes in jazz, and this is part of what we do. We’re not looking for the perfect note. In fact, we’re looking for mistakes that will lead to more beautiful mistakes. That is a very good encapsulation of the human condition. We are far from perfect. At the same time, in spite of our imperfections, we are able to play beautiful music. We are able to play things that people will find pleasurable.

Well, I think there’s a small but mighty crowd of people. I wish that there were more people involved in what we do, and I think that through the many efforts of many different NGOs, charities, and schools, we will see the gradual blossoming of jazz into a more mainstream art form than a niche thing that it is right now. I can see that happening. It’s already co-opted into the O-level syllabus for a few months, and that is a very major feat which has been due to the efforts of many important people including Jeremy Monteiro and Professor Tommy Koh. There are so many people who are invested in what we are doing and will like to see Singapore play a bigger role in the world of jazz.

How do you see the future of jazz in Singapore?

I think the future is good, I think the future is bright. There are many interested parties who are working very hard to further the cause of jazz both in public and private. That to me is an indication that there is a demand for it, there is a desire for it to play a larger role in society. And what I like to bring to the table is to remind everybody that what we do is entertainment.

You can catch Tan Wei Xiang in action every Tuesday at Maduro.

Singapore Jazz Tan Wei Xiang Maduro The Singapore Spotlight
Josiah Neo
Writer
Josiah Neo is a tech writer who contributes occasionally to the fashion, travel, and culture beats. When he’s not busy keeping up with the keynotes, he’s probably stuffing his face with the best Melbournian donuts (at Shortstop, BTW) or watching his favourite esports team, the Los Angeles Valiant, pummel their opponents into oblivion.
Technology Travel Fashion Culture
Sign up for our newsletters to have the latest stories delivered straight to your inbox every week.