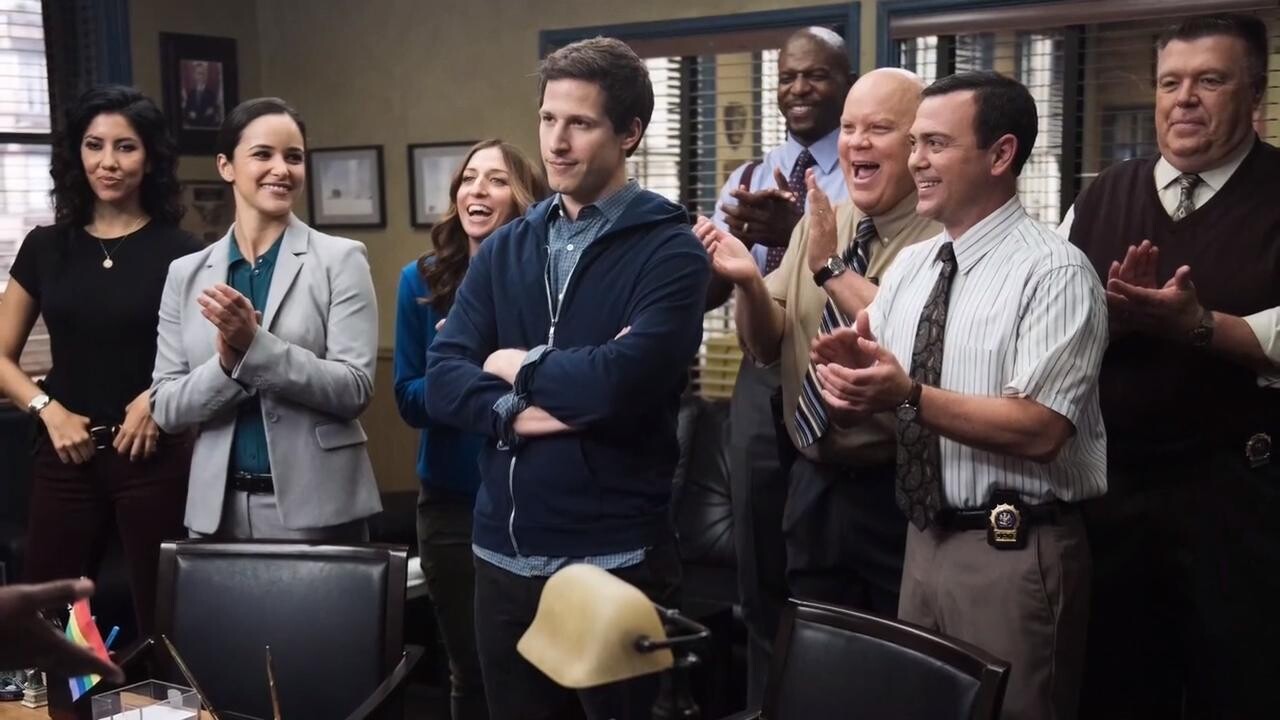 Living
Brooklyn Nine-Nine, Money Heist, and other TV series we’ll be saying goodbye to in 2021
Share this article
Next article

Remember waiting for a favourite show to be aired on your cable television before the advent of OTT platforms?

Well, like many other technological advancements across industries, OTT platforms bring you the ease of watching the best of shows and movies anytime you want. However, this does not alleviate the suffering of a TV series nearing its end.

Having said that, you can still watch the reruns of a series as long as it is available on an OTT platform, relive the experience of watching it for the first time and going on a roller coaster of emotions. But like all good things come to an end, your favourite TV shows too will eventually bid adieu. Remember when the last episode of Friends aired in 2004? We were not ready for it. Thank the OTTs for helping us watch it whenever we want.

Over the last year, many TV shows, as well as movies, have been halted or cancelled owing to the COVID-19 pandemic. From Brooklyn Nine-Nine to Goliath and Lucifer, we tell you the renowned TV shows ending in 2021, so that you can prepare yourself for the finale.

Tom Ellis essays the role of Lucifer Morningstar, aka the Lord of Hell. The ongoing TV show, which started in 2016, is set to release its sixth and final season on 10 September. The crime fantasy revolves around the Devil who alights on Earth after abandoning Hell. He opens a nightclub named LUX in Los Angeles, US, and starts living an ultimate bachelor’s life. He meets a homicide detective, Chloe Decker played by Lauren German, who, unlike others mortals on the planet, does not fall for his charms. Soon, he joins the LAPD to assist her in solving crimes.

Other prominent characters include Mazikeen (Lesley-Ann Brandt), who is Lucifer’s sidekick and a demon, his eldest angel brother Amenadiel (DB Woodside) and Dr. Linda Martin (Rachael Harris) — the Devil’s therapist.

It looks like #Lucifer season 6 will be more than 8 episodes after all! https://t.co/WSd8g7EbFo

The final season will have 10 episodes and feature a few new faces playing a part in the angelic family. There are talks about a time jump between seasons 5B and 6 and the crime-solving team will be dealing with many villains too.

It is time to say bella ciao to Money Heist (La Casa Del Papel) as well. The most-watched non-English show on Netflix will be releasing its fifth and final season globally in two volumes — the first one will hit the OTT platform on 3 September and the second on 3 December. The Spanish crime show that has a global fan following rotates around two heists, thoroughly thought through by the Professor, played by Álvaro Morte.

The first season shows eight thieves, taking hostages and locking themselves up in the Royal Mint of Spain with Professor (Álvaro Morte) leading them from the outside. The show is also loved by fans as it features various strong lead roles, including Úrsula Corberó as Tokyo, Itziar Ituño as Lisbon/Raquel Murillo, Pedro Alonso as Berlin and Alba Flores as Nairobi, among others.

Season three and four showed the team reuniting, and this time targeting the Bank of Spain and all the ups and down that they went through. The trailer for season five released on 2 August. As for what you can expect in season 5, creator and executive producer Alex Pina has said in a statement, “We’ve spent almost a year thinking about how to break up the band. How to put the Professor on the ropes. How to get into situations that are irreversible for many characters. The result is the fifth part of ‘La Casa de Papel’. The war reaches its most extreme and savage levels, but it is also the most epic and exciting season.”

“Nine-Nine!” — you won’t be hearing Terry or Jake Peralta shouting this anymore after season eight. The comedy show, that has been entertaining people since 2013, will end after the eighth season slated to release on 12 August. The show revolves around the detectives at the 99th Precinct of the New York City Police Department (NYPD).

The show begins with Peralta (Andy Samberg) starting on a rough note with the new Station Captain Raymond Holt (Andre Braugher), but they eventually become good friends. The other leads are played by Melissa Fumero as Amy Santiago, who eventually becomes Jake’s wife, Stephanie Beatriz as Rosa Diaz, Joe Lo Truglio as Charles Boyle and Terry Crews as Terry Jeffords. There is crime-solving, annual Halloween heists, humour and life lessons through the course of the series — that’s what is expected of this last season as well.

Adapted from a book of the same name, Dear White People was first released as a film in 2014 and later made into a TV series in 2017 on Netflix, starring Logan Browning as Samantha White, Brandon P. Bell as Troy Fairbanks and Antoinette Robertson as Colandrea “Coco” Conners.

The series beautifully captures the hardships of the black minority at an Ivy League, predominantly white, college and how they feel about it while trying to steer through social injustice and cultural bias — all this while satirising the comic elements. Season 4, with its 10 episodes, is expected to follow the same narrative. Though the official date is yet to be announced, the show will be releasing later this year. Meanwhile, Deadline reported that Karamo Brown, one of the fab five from Queer Eye, will be joining the final season in a recurring role.

Billy Bob Thornton won a Golden Globe for the ‘Best Performance by an Actor in a Television Series’ for his role in Goliath in 2017. In the series, that debuted in 2016, Thorton plays the role of Billy McBride, a lawyer who has given up and is found in a bar more often than in a courtroom. The once hotshot lawyer unwilling agrees to take a case to fight a lawsuit against one of the biggest clients of his previous law firm which he had helped to establish.

The term ‘Goliath’ means a giant or extremely large, and those are the kind of problems that McBride faces as he returns to the courtroom. From life and death trials to a character almost dying in season 3, the show keeps you hooked. The fourth and final season is slated to release on 24 September with eight episodes, in which, McBride will apparently be seen standing against the opioid industry.

Other known faces in the show include Nina Arianda and Brittany Gold as Patty Solis-Papagian and Tania Raymonde, respectively.

Dead To Me (Netflix)

The Emmy-nominated comedy-thriller was released on Netflix on 3 May 2019. The show, which is known for the way it handles trauma, adds satire to every situation and has the wildest cliffhangers, has become a fan favourite since it hit the screens. It started with Jen Harding (Christina Applegate) looking for the hit-and-run driver who killed her husband. In comes Judy Hale (Linda Cardellini), who meets Jen at a grief group and becomes her close friend. It is later revealed that Hale is related to the hit-and-run accident.

The show covers their life together and blossoming friendship which is the result of the struggles they are going through, including the murder of Judy’s ex-fiance Steve Wood (James Marsden). He was an attorney indulging in criminal activities with the Greek Mafia. In July 2020, Netflix announced that the show will return for a third and final season which will uncover all the secrets one by one. Even though an official date for the release has not been announced yet, the show will hit the OTT platform either very later in 2021 or early 2022.

We were first treated with this hilarious series in 2016 but it will come to an end after the fifth season. Partially based on the TV show Awkward Black Girl, this show beautifully captures the struggles of two best friends — Issa Dee (Issa Rae) and Molly Carter (Yvonne Orji). These black women are in their late 20s, living in Los Angeles, California and getting through life one day at a time. Insecure is about the challenges they face in their careers, love life and with the African American community.

The viewers can expect to see breaks in their friendship in the fifth season, which was announced in May 2020. Though the final season’s shooting got delayed because of the pandemic, the HBO Max lineup trailer suggests that we will be saying goodbye to our favourite characters later this year.

This show has all the components of a great suspense science fiction that keeps you on the edge of your seats. It is an adaptation of the 1812 novel The Swiss Family Robinson, which was adapted into a TV show in 1965. The first season of Lost In Space was released in 2018, and it follows the Robinson family, who crash land on an alien planet and try to survive and escape while trying to fight all the odds and the hidden dangers. Molly Parker, Toby Stephens, Maxwell Jenkins, Taylor Russell and Mina Sundwall play the lead roles.

The second season of the show takes the family deeper in Space as they explore new strange planets and face even bigger dangers. In March 2020, it was announced that the third season of Lost In Space will also be the final. According to IMDb, this season, just like the other two, will also have 10 episodes. As to when it will release, no official date has been announced yet, but Netflix is maintaining that it will be aired in 2021.

F Is For Family (Netflix)

Released in 2015, F Is For Family is an American animated TV series that has been entertaining fans for four seasons and will be coming back to Netflix for its fifth and final season. The adult animated TV show ending in 2021 has been explained as ‘raunchy’ by Netflix itself and is created by Bill Burr and Michael Price. The show is about the Murphys who are a dysfunctional family living in the suburbs in the 1970s and the day-to-day happenings in their life.

Bill Burr is also the voice of the main character Francis “Frank” Murphy, a short-tempered Korean War veteran and a father of four. What can we expect from the last season you ask? Burr, in his podcast, said that he thinks this season will be the best one till now and, “we’re going out with a bang.” No official date for the fifth season has been announced yet, but the production is in process. It is being speculated that it will be either in late 2021 or early 2022.

Not just the above-mentioned shows, many others also took a final bow earlier this year. Some of the shows we said goodbye to include Keeping Up With The Kardashians, which gave us one of the first family of television, Anna Faris- and Allison Janney-starrer Mom, the unexpected lockdown hit The Bold Type, Atypical, Conan, A Little Late With Lilly Singh, Feel Good, Pose and Superstore.

Netflix HBO tv shows streaming platforms Content Hub Brooklyn nine nine
Nishtha Grover
A travel fanatic who loves exploring new dishes and cultures only to later write about them. You will either find her reading, trying new skincare products or sleeping during her spare time. Also, loves rock music and cannot do without it.
Culture Travel Entertainment Food