Chinese tech companies have been on the rise lately. Take Huawei for instance. The Chinese multinational networking and telecommunications firm headquartered in Shenzhen has been making waves around the globe. It has been scoring partnerships with world-renowned companies Porsche Design and Leica — standing shoulder to shoulder with competitors like Apple and Samsung.

Another prominent Chinese company that has made news globally is Internet giant Tencent Holdings, which is now valued at S$15.8 billion. The leading provider of Internet value-added services recently announced an equity swap with Swedish music streaming service Spotify.

With these Chinese companies making headlines, it almost seems like they’re taking over the world — but are they really?

We consulted Gavin Da Cunha, the Asia Managing Director of PMC Treasury, an independent specialist treasury and risk management consultancy. Da Cunha makes the perfect choice for our third instalment of interviews with the extraordinary members of The Great Room — where we throw the spotlight on trends dominating a myriad of industries from social media to music streaming and finance.

We caught up with the Managing Director, who recently moved to Singapore from London to head PMC Treasury’s Asia Pacific office. Da Cunha tells us about the trends that are emerging in Asia Pacific, why investments are moving from the US and Europe into Asia (specifically China), and the recent Tencent and Spotify equity swap. 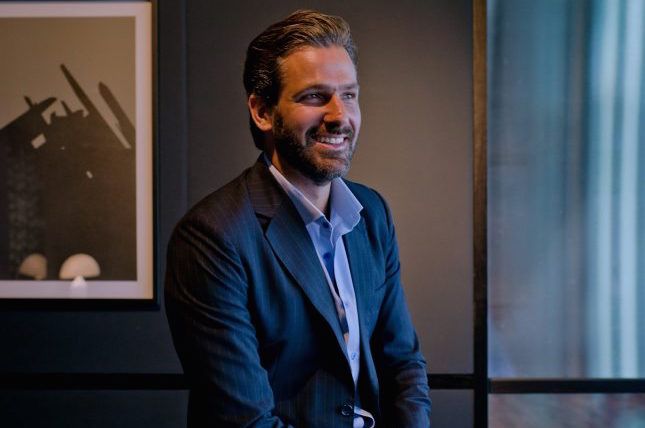 First, tell us a bit about yourself. How did you get to where you are as Managing Director of PMC Treasury?

I had a long and fruitful career in banking, mainly in Europe running large teams and significant client businesses. My first job as a graduate was at Standard Chartered, where I was chosen for its management programme. I spent four years there during the Asian Financial Crisis, which was an interesting time to be in Standard Chartered because the Asian market was experiencing extreme volatility with the break of currency pegs. From there, I proceeded to a job that defined my career at Goldman Sachs, where I spent 11 and a half years.

PMC Treasury, where I’m at now, was a client in the past. So I’ve had the opportunity to jump to the other side. The opportunity to do something different and more nascent, as well as leverage my own skill set for the benefit of clients in this region offered a different challenge and a new learning curve.

Originally, I intended to delve into journalism or international relations. I went to the London School of Economics for University, where I learnt more about finance — and that piqued my interest. I love the interesting mixture of client interaction. I work on the market side, so I have to keep myself up to date on what’s happening in the world, both politically and economically. That always interests me.

What trends are you currently seeing in the industry?

We recently opened an Asia Pacific office in Singapore, as we have seen a significant increase in both deal activity and capital raised by our clients to pursue investments in Asia Pacific. As the region is diverse and each country has its own specific nuances, we’ve seen some general trends. The first is that more capital is coming into Asia. That’s because there’s a lot of growth in Asia — and with growth comes huge potential to buy businesses, change how they’re managed, and leverage strong cash flows to help expansion. They bring in some of the operational expertise from the businesses in the US or Europe.

Asian investments are impacted by the underlying economic performance, the specificities of the local capital markets, as well as the different currency and interest rate risks faced in these markets. A period of strong growth, cheap financing, and low volatility has clearly encouraged more investment in the region.

Why do you think a lot more investment is moving from Europe and the US into Asia?

A lot of it is driven by growth, as well as demographics. In Asia, you have huge populations in places like China, Indonesia and India. Additionally, there are frontier markets which are in their very early stages of development — places like Vietnam and Myanmar. Populous markets coupled with much greater spending power, especially in the growing middle class, mean there is huge upside in capturing the right trend and developing businesses with strong unique selling points.

In Asia, there’s the opportunity of going in and building something that can grow very quickly. Therefore, most of our clients are typically going to invest with a view to maximise their return in a three- to five-year time frame. They will be driven by belief in the company’s management team, their strategy, the investment needs of the business as well as the growth potential from this investment. Clearly, the growth is going to be greater if the economy is doing well. Tech is becoming very relevant to the investments that our clients make. It’s also relevant to us in terms of how we better our own offering as we move into a FinTech world.

Do you think the biggest growth would be in China?

China obviously has the highest growth in absolute terms. It is the engine of world growth, just by virtue of the scale of China. What you also have is an increasing move away from traditional trade-driven businesses towards tech — that’s been driven by the fact that there hasn’t been a mature banking system

Therefore, more and more payments can happen through the Internet and that sees the prevalence of consumer businesses such as Alibaba and Baidu. These are simple platforms that started off as shopping channels but now offer social media, entertainment, payment and financing channels. These businesses have suddenly become huge conglomerates that are offering more to their clients because they have huge data. They know the spending patterns and tastes of their clients much better than anyone would.

What kind of tech companies are you seeing emerging in Asia, specifically China?

The trends in tech we’re seeing in Asia, especially in China, are similar to those we see elsewhere. However, the pace of change to a cashless system, given the lack of a developed retail banking system, has been much faster. The growth in market cap of companies like Alibaba, Tencent and Baidu is testament to the number of users, and how quickly they have utilised their platforms to widen their offerings.

Why do you think this will be a success?

In Asia, particularly in the most populous countries, technology has provided access to a large section of the population that previously didn’t have it. The momentum from innovation and growth combined with the rising income and wealth of the Chinese is a powerful factor.

For example, China’s State Council set out a goal in July 2017 to expand Artifiical Intelligence (AI) into a US$150 billion (S$197 billion) industry in the next few years. This will turn the country into an innovation centre for AI by 2030.

How do you think the emerging Chinese tech companies will revolutionise the world?

I think they already are. Chinese tech companies are starting to innovate more than ever. While a huge differentiator in the past used to be the price of Chinese products, the functionality of these services now is pretty impressive. They are now doing things more efficiently, faster and smarter.

They’re doing things at a pace that has far outdone what’s happening in the US and Europe. That fact, coupled with increased funding as well as wealth increases in China, means that the potential of these Chinese tech companies is only going to grow.

Their success in China is quickly spreading to other places in Asia. Therefore, many of these Chinese companies are expanding abroad — both organically and through acquisitions where they leverage their technology and adapt with partners to local needs and tastes.

Take AI as an example. While the US may be leading in areas like self-driving cars, China’s use of AI in the consumer and retail space, as well as the way they are leveraging big data, is very revolutionary. I think that’s going to be a further driver of innovation. In my own area of finance, this innovation is only just starting. Soon, AI and machine learning will be used more widely in trading, investing and for risk management.

Do you personally use Spotify?

I do, especially at home and on mobile, when I’m on the move. Interestingly, it was a client of mine in London, back when I was in banking. So I’ve met the Spotify team in Stockholm. I love its content, and the ability to stream it. I love Spotify for its playlists, as well as podcasts.

In the past, I used to listen to CDs and I left my entire collection of about 200 CDs back in the UK, along with my DVD collection. Everything is streamed online these days, so there is no need to take them with me. It’s the same with TV — I stream my content online.

What are your thoughts on the recent Tencent and Spotify equity swap?

Tencent has done this before with companies like Tesla, Snapchat, and India-based Flipkart and Ola. Clearly, it’s been very successful. This works because Tencent may not necessarily know and understand the different local markets. It also gives it access to new technologies, as well as different distribution channels.

With Spotify, for instance, the partnership will help Tencent’s own music entertainment system, Tencent Music Entertainment (TME), as Spotify can potentially provide it with a lot of content and technology that will improve its offering in China.

For the other party, in this instance, Spotify, the partnership will give it potential access to China — as Tencent knows the market inside out. Additionally, Spotify will also have access to some of the technology that the Hong Kong-based company developed.

A partnership like this is a win-win all around, as it will benefit both parties. People will start seeing the value of Spotify as a force in China where it hasn’t been before, thanks to the partnership.

What can you predict will be the next big thing with Tencent? Which company will it partner with next?

Chinese companies have been making a lot of acquisitions overseas. The recurring trend now is that more companies (such as Netflix and Amazon) are becoming content providers. So the natural step for companies that are growing is to buy content.

There are so many possibilities. Who knows, maybe they’ll buy a film studio, animation studio, or music producer. These are the spaces where I think, if their entertainment offering grows, they end up being the producers of content — as well as distributors of that content.