Q&A: Why video advertising is the way forward

Living
Q&A: Why video advertising is the way forward
Share this article
Next article

Content is king, they say. But ask Christian Guinot, the Senior Vice President of global media platform Teads Asia Pacific and he’d tell you that the adage refers to video content — especially in this day and age. Just scroll through Facebook and you can keep yourself occupied with anything from TED Talks to Tasty videos.

In this era, behaviour has changed and the advertising industry is evolving with it. Guinot — a veteran of over 25 years should know. His prestigious clientele includes the likes of Pernod Ricard, Google, Louis Vuitton, Piaget, Gucci, and BMW just to name a few. We interview him for insights on the shift in the advertising industry from television to digital, the future of online advertising, and why video content holds the most appeal.

What exactly do you do?

My role is to lead Teads in the region in terms of development. I’ve been with Teads for two years and helped establish our presence in Singapore two years ago. After which, we opened in Korea and most recently, Hong Kong. I supervise the team and develop relations at a high level with the client, as well as creating a partnership with both publishers and advertisers.

Tell us more about Teads.

Teads means technology and advertising. We started in France six years ago, so we’re quite a young company. The United States is our main market, so we’re headquartered in New York now. Teads specialises in out stream or native videos. These are the videos that appear when you scroll down while reading an article online.

We were the pioneers in using 360-degree videos and Augmented Reality in native advertising, Before this, the only advertising video you have was to stick to video content. You’d have to watch the advertisements before you see the content you want to see. It was something new in the market and we developed it very well.

We’re now working with some of the biggest publishers in the world and help them monetise their content. All we have to do is place the tag in between the story, so when people read they have access to advertising. While outstreaming is very common now, it was new when we first started. 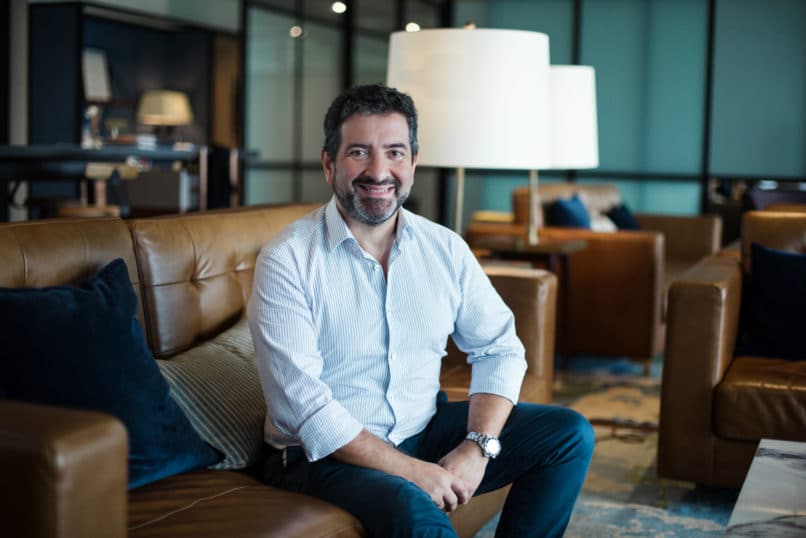 Why did Teads choose to develop in Singapore?

We wanted to develop in APAC. Most of our clients are located here, so it was a natural move for us to start here. We’ve just opened our second hub in APAC in another important location, Hong Kong. I’ve been travelling back and forth the past few months.

Native advertising is melting or merging the advertisement with the content so it is less intrusive for the user. It’s the antithesis of advertising that is forced to be seen or heard. In our case, it’s a video that is integrated into an article, and the sound is off. We try as much as possible to be non-intrusive, so we provide a good experience for the users.

If you look at reports, 75 percent of advertisements online are rejected by people or perceived negatively because it’s too forced. So we try to be part of this other 25 percent which is accepted. Even though it’s still advertising, it’s part of the ecosystem because we provide good information that is integrated into the content of our publishers.

How was the advertising landscape like when you first started 25 years ago?

Twenty five years ago, there was no internet. It just didn’t exist. There was no online advertisement, either. Everything was very focused on television advertising by creative agencies. TV advertisements were the king of the industry and everything was happening in the famous 30 or 45 seconds.

Our job as a media planner at that time was to contact the TV station and program schedule on different advertising breaks. That was 80 per cent of the job. At the advent of the internet, mobile phones, and technology, things then changed dramatically.

How different is advertising now compared to 25 years ago when you first started?

In the past, it was all about making a great campaign and showcasing it on TV or outdoors. All we had to do was broadcast something to people. Now, it’s also about the medium the advertisement is distributed on, and how it reaches the user.

We now have to adapt it according to the medium. It’s not so upfront as it was 25 years ago. Within the next five years, I’m pretty sure most of the advertisements will go mobile, especially now that people have a special relationship with their mobile — which they use from morning to evening.

Now, that’s why the brands are more interested in mobile advertising and using Teads’ technology. It’s not just about putting something and leaning back. Now it’s about building a relationship with the consumer.

It’s about active engagement, interactivity. You need to engage with the consumers, understand their choice, talking to them at the right moment with the right product, and be part of their social life. What we are now is perfectly in sync with the advertising landscape.

How do you use your experience to help with what you do with Teads now?

While the nature of advertising is now different, some skills remain useful; such as listening to clients, understanding their needs and expectations, communication, marketing, and how to support their business.

It’s about finding the right people and creating the right team. It’s about who is able to work together and add value as a team. I know what works and what doesn’t work in terms of structure, organisation, and how to create business opportunities. I pass this knowledge to the rest of my team.

Why is native advertisement important?

People’s attention spans are a lot shorter now compared to in the past. Consumers now have a choice to watch or not to watch your ad, to engage with the brand or not. Native advertising is fundamental for them to build dialogue and establish relationships between the consumers and clients.

What are the current trends in video advertising?

The consumers would be more engaged. Instead of just watching a video, the person will be the centre of the message. That’s a strong trend. Dialogue will be more targeted, fragmented and addressable to the person.

What do you think the future of advertising will be like ten years from now?

The future of advertising is digital. People always say that digital is king and video is the queen. I think in the future, we’ll have those two things becoming more interlinked.

Ten years from now, native advertising will be more and more precisely addressed to you. For example, your phone will be able to recognise your emotions and interact with you accordingly. However, I do feel like all advertisers should respect consumers’ privacy and not be too intrusive in people’s lives. Technology can go very far, but there must be some limitations on what we can or cannot do. How long have you been at The Great Room?

We moved into The Great Room one year ago in a small office, and have moved three times in the same space. We’ve grown quite strongly in one year. Two years ago, I was the only one. Now, there are almost 25 of us.

Tell me more about your daily routine at The Great Room?

I don’t really have a routine. I’m travelling a lot, so I don’t spend so much time in Singapore. Every morning, I’ll spend time to drop my kids at school and review my emails from last night in the car on the way to the office.

A lot of our operations is in Europe or the US, so there’s a flow of emails every morning. I arrive at The Great Room around 9:00 am, and the first thing I do is make a coffee with the excellent espresso Italian machine. After engaging with the team, I spend 40 to 50 percent of my time with clients or publishers. The rest of the time is focused on internal work.

It’s located in a great location, especially in the advertising business because most of the agencies are within walking distance. It’s very central and I think another big aspect and feedback I get is they like the environment and culture, with a lot of entrepreneurs and tech companies.

The culture is very inspiring for us. My team is made out of a lot of younger people, and they feel very comfortable in that environment. Additionally, The Great Room is also very stylish and beautiful. Elegance is part of our DNA. We’re a French company, so it’s important to take that into consideration. The Great Room is very well-aligned on that.

Membership at The Great Room starts at S$750 per month. More information here.

Interview Q&A The Great Room
Dewi Nurjuwita
Senior Writer
Dewi Nurjuwita is a travel and design writer who can be found exploring the streets of foreign cities with passport in one hand and a cup of coffee in the other.
Travel Architecture Interior Design