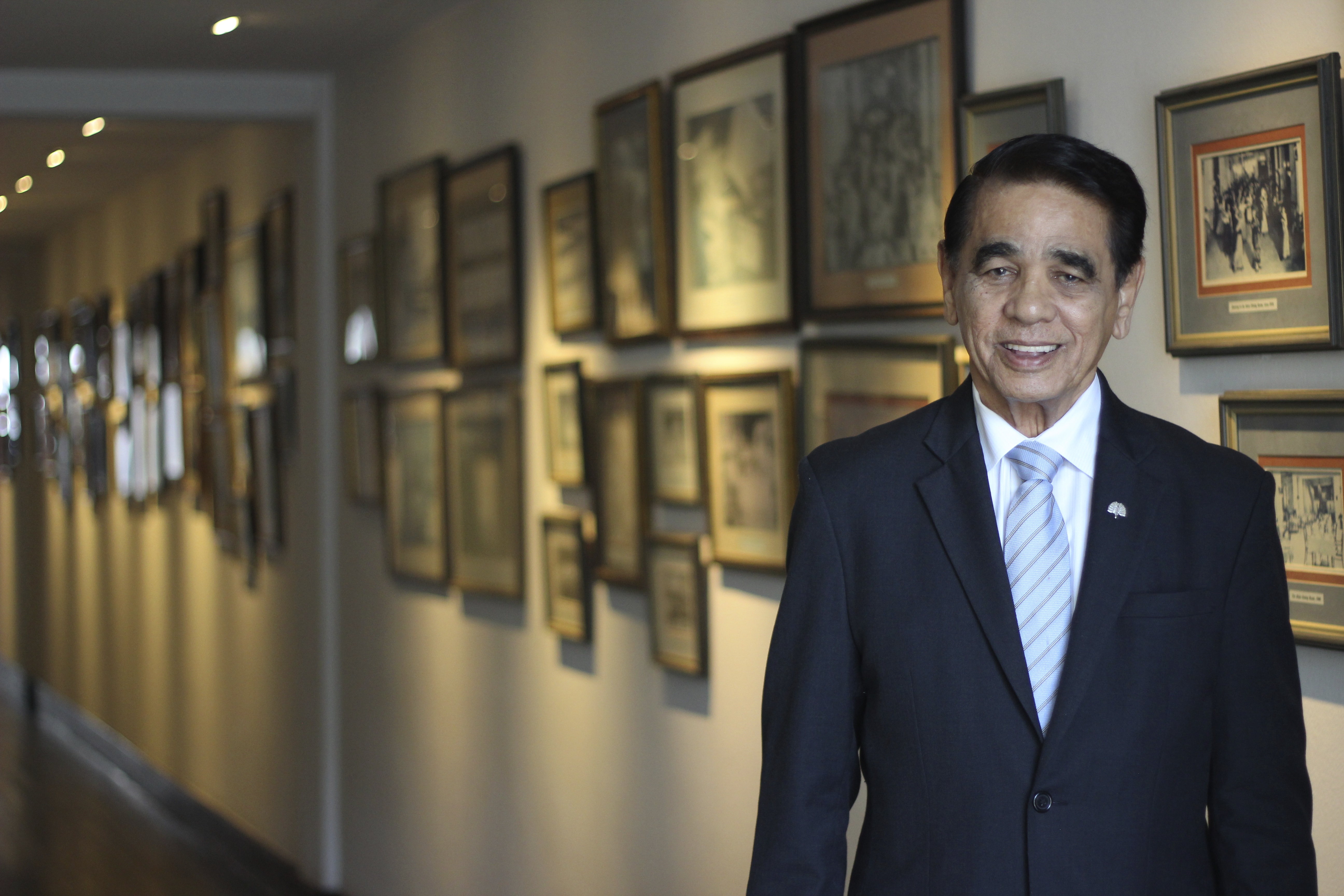 As the grand old dame of heritage hotels in Singapore, Raffles Hotel has been the witness of much of Singapore’s history and has stood as the iconic background to many a photograph (including our own). Its colonial style architecture and cream-coloured facade are as Singaporean as the Merlion or char kway teow.

Founded 129 years ago by the Armenian Sarkies brothers, the hotel has withstood two World Wars, Singapore’s independence and rapid rise to a modern city. And since 1972, Leslie Danker, the hotel’s longest-serving employee, has been there to witness the various changes to both the hotel and country.

Few can say they know the hotel’s story as well as Danker does. Sprightly and looking younger than his 77 years of age, Danker rattles off facts and figures about the hotel with ease, a walking encyclopaedia for the hotel. Today he conducts heritage tours for guests, and was recently the face of The Raffles Stories, a 12-video series chronicling the hotel’s history.

Danker started out as one of the hotel’s maintenance supervisors, working with carpenters, painters and plumbers to ensure the hotel ran smoothly (he also had to handle guest complaints). Even as a teenager Danker had wanted to be a part of this future landmark. “My school (St Joseph’s Institution) was just down the road. So after class I’d walk past and admire the hotel,” he says. “One day after completing my studies, I went in and had my first beer in its ballroom. I looked at the architecture and thought, ‘what a nice place to work.’”

The Raffles Hotel where Danker first worked is decidedly different from the one that greets guests today. An opulent ballroom once stood in its current driveway, and the iconic Bar & Billiard Room once housed more guest rooms. The lobby featured high ceilings and glass tiles to allow for natural light and the flooring was all wood. Instead of the Raffles Grill, the restaurant was known as Elizabethan Grill, an homage to Queen Elizabeth II who was crowned in 1953. “The management wanted to honour the Queen, so they changed the whole décor,” recalls Danker. “There were wooden panels on the wall, a Coat of Arms and even a mock fireplace.”

Even customer service was different in this pre-Internet era. Danker recalls staff having to manually record guest details in a much more tedious process. “When guests checked in, we’d take their registration cards to the back of the office and enter the information into one book for the operators, one for finance and another for the front desk,” he says.

As the hotel’s longest-serving employee, Danker knows some interesting facts about the hotel. For example, in its previous incarnation, Bar & Billiard Room made headlines in 1902 when a tiger who escaped from a nearby circus was fatally shot by former Raffles Institution principal Charles McGowan Philips.

Danker has worn many hats in his time at the hotel, moving from supervising the maintenance division to overseeing the F&B department and later being appointed the Guest Relations manager. Naturally this has led to some interesting guest interactions.

Particularly memorable was the late Michael Jackson, who stayed at the hotel in 1993 while on tour. Danker remembers him as a “soft-spoken and polite man,” which contrasted sharply to the pandemonium his visit caused. “There were more than 300 people waiting [in the front entrance], so we had to bring Michael in by the staff entrance. When we reached his room, he saw the big crowd outside his window, opened it and waved to them.”

Other luminaries that Danker has met include actor John Wayne (“nice and humble”), author James A. Michener, Hong Kong action star Jackie Chan and her majesty herself, Queen Elizabeth II.

Danker became the hotel’s resident historian in 2010 after the management noticed his enthusiasm for sharing stories with the hotel’s guests. In many ways, it felt like a natural progression, as Danker had been compiling information on the hotel’s background since it underwent a major restoration in 1989.

The same year he assumed the role of historian, Danker published a book titled Memoirs of a Raffles Original, detailing his experiences. “[During the restoration] I collected all the media reports which detailed the history of each hotel wing and how it would be changed. Another thing I did was carry a black notebook when I went around with the interior designers and architects.” Even now, Danker carries around his black notebook, as a reference (and sentimental reasons).

Now a grandfather of two, Danker is still very much devoted to his work and isn’t planning to stop anytime soon. “My relationship with Raffles Hotel is like a love story. Before I started working, I only admired its exterior. But after I joined it, I found out more about its beautiful architecture and the events that took place here, and began to form an attachment to it. It’s like falling in love, where you get to know the person better over time,” he says. “And once you fall in love, it’s forever.”

What makes good restaurant design and why is it so important?