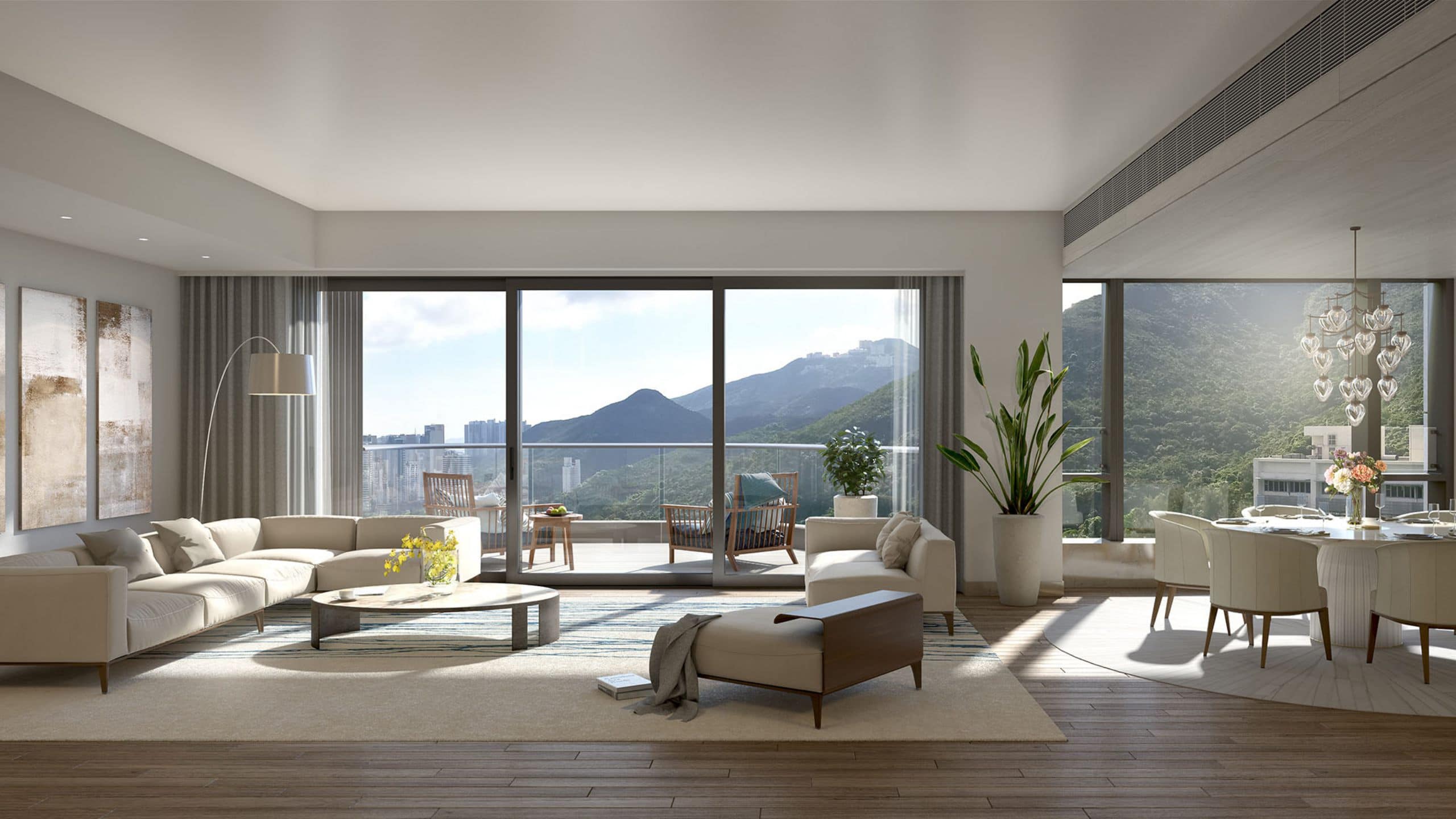 6 extravagant new Hong Kong residences you should know about

From design masterpieces to the promise of opulent, refined living, we take a look at 6 of the hottest Hong Kong properties on the market right now.

New World Development’s latest residence project is a designer oasis in the midst of the hustle and bustle of the local North Point neighbourhood, in the heart of lush Mount Kai Yuen. The clubhouse itself, inspired by a traditional chashitsu tea room, is designed by Shigeru Uchida, with the central gardens Fleur Island, developed by landscape design firm Ohtori Consultants Co. Ltd., offering a modern Japanese design aesthetic for the surrounds. Continuing New World Development’s obsession with artful additions, the usage of pine, bamboo and plum blossom throughout the property is balanced by objets d’art and ikebana arrangements, as well as light sculptures, dancing water installations and bespoke furniture. Fleur Pavilia spans 611 units across three towers, with mainly three to four bedrooms per unit, with starting prices from HK$27.4 million.
Fleur Pavilia, 1 Kai Yuen Street, North Point, Hong Kong

Right in the heart of one of the most prestigious school networks in town, Cristallo is a new property by Grand Ming Group and only the developer’s second residential project. Revealed earlier in the year to press visits was the penthouse, which rests at 15-16/F of this relatively low-rise luxury apartment. Spanning a roomy 2,721 sq. ft., there’s also a roof terrace at just under 1,000 sq. ft. at your disposal, with views looking towards the sweeping majestic green of Lion Rock and Kowloon Tong before it. One buyer reportedly purchased two lower-level units for HK$72.7 million just in October — so one can only imagine the astronomical price tag of its crowning unit upstairs.

Kwun Tong’s yet to be completed Grand Central is set to bring life to the heart of Hong Kong’s up and coming ‘new CBD’ in East Kowloon, just a stone’s throw from major shopping centre APM. The luxury residence boasts an international design team who has worked on the likes of Mandarin Oriental, New York, Four Seasons Kyoto, as well as Grand Hyatt Hong Kong. As such, Grand Central’s opulent design of its communal spaces harks from the look and feel of five star hotels. It is also particularly inspired by the Royal Botanic Gardens, Kew, which translates into a glassed lobby that blurs the line between indoor and outdoor.

An unusual yet slick nautical motif runs through The Pavilia Bay, another of New World Development’s properties launched this year. Enlisting world-renowned superyacht designer Philippe Briand for the project, Tsuen Wan West residence exudes resort-style over-water living with refined touches, whether it’s the ‘underwater’-style lights in the clubhouse exterior or the carbon fibre spiral staircase. The Pavilia Bay has 983 studios and up to 4-bedroom units across its two towers.
The Pavilia Bay, 51 Wing Shun Street, Tsuen Wan West, Hong Kong

If space and green living is what you seek, the close to completed Sha Tin property La Vetta should capture your attention. Developed by Wing Tai Properties, who is also behind the sumptuous living standards at the Lanson Place Hotel, La Vetta captures the essence of a grandiose, luxury estate. There’s sculpted gardens, a lavish pool and clubhouse, and its 68 houses and 90 apartment units offer various views over the green rolling hills of Kau To Shan. It’s all designed by an international team of masters, headed up by design studio Yabu Pushelberg who have worked on landmarks such as the Four Seasons New York Downtown, Park Hyatt Bangkok, Lane Crawford IFC, and local French fine dining establishment, Arbor. The neighbouring peak is also home to sister property, Le Cap.
La Vetta, 68 Lai Ping Road, Sha Tin, Hong Kong

Who isn’t wowed by a sprawling hillside residence with views over Hong Kong’s fabulous emerald forests? At Nan Fung Property’s 8 Deep Water Bay Drive in particular, views look over Hong Kong’s only “feng shui forest,” which beyond its ecological significance is said to be an auspicious locale to help bring in wealth and fortune. Prospective homeowners will surely need it, as the first sale in October reached a cool HK$287 million for a 4,214-sq.-ft. unit. It’s not hard to see why: units here are typically 3 to 4-bedroom apartments; they’re bathed in soothing natural light, and feature uniquely spacious double balcony layouts, spread across the master bedroom and the living room.
8 Deep Water Bay Drive, Southside, Hong Kong

Images are computerised renderings and do not fully reflect the nature of the residences.

Give your home a gorgeous makeover with these four easy tutorials