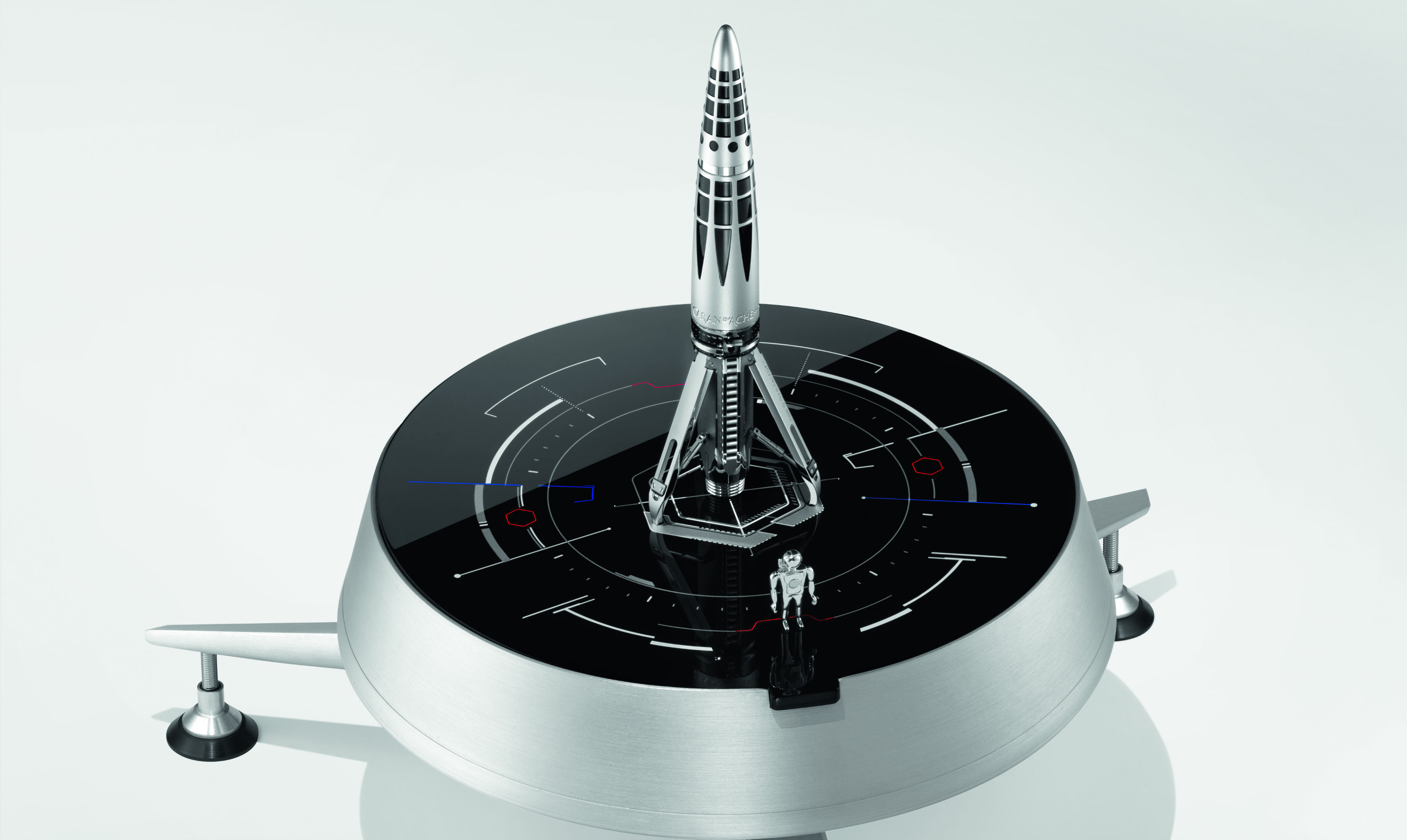 Swiss watch manufacturer Maximilian Büsser and Friends (MB&F) has made a name for itself since it first started in 2005. Known for its Horological Machine wristwatches, we’ve also seen the brand dabble in various collaborations and unique clock designs – which includes a robot-themed and spider-themed clock with L’Epée 1839, and music boxes inspired by various science fiction universes with Reuge.

MB&F is back at it again in its latest collaboration with another Swiss brand, luxury stationery and pen maker Caran d’Ache. The genius creation this time? An obscenely lavish pen inspired by space travel, the Astrograph.

The Astrograph pen, as with many other MB&F designs, is inspired by science fiction – as well as founder Max Büsser’s memories of imagining pens as rocket ships during dull moments in classes and meetings. When founder Maximilian Büsser met Caran d’Ache’s creative teams, said he wanted to “let his childhood dreams of travelling in space unfold in a writing instrument.”

Astrograph is a result of four years of planning, testing and developing. The mechanism of the writing instrument is inspired by penknives – with a miniature lever which acts as an entry door to the rocket, concealed in the ring of the pen, and activating the simultaneous lowering of three stabiliser legs. The pen is fitted with an ink pump, but may also be used with cartridges – and has a pen nib made from rhodium-plated 18-carat gold.

Available in either a ball-point or fountain tip, the writing instrument is protected by an over-the-top-but-super-cool cap which features retractable landing gear and intricate details like a tiny ladder for an equally tiny astronaut figurine.

What we love is the Astrograph’s outrageous packaging, which does double duty as a display stand for the elaborate pen. It definitely adds a few levels to the pen’s collectability.

Astrograph will be made available in three different finishes – from metals like rhodium and ruthenium. With a limited collection of just 99 pieces and a $29,600 price tag, you can be sure you are just one out of 99 in the world to have an Astrograph on your desk.

MB&F Caran d'Ache Pen spaceship pen Astrograph luxury pen luxury stationery
Dewi Nurjuwita
Senior Writer
Dewi Nurjuwita is a travel and design writer who can be found exploring the streets of foreign cities with passport in one hand and a cup of coffee in the other.
Travel Architecture Interior Design

Gear
Sandra Lee on how technology breathes life into her entrepreneurship journey
Style
Cherry Discotheque’s merch line defines cool ways to pay it forward during COVID-19
Style
Miu Miu gives vintage fashion a stamp of approval in its #MiuMe campaign
Food & Drink
7 best self-tanners to get a beach-bronzed glow at home
Gear
Porsche unveils its eighth-generation 911 Targa just in time for summer
Style
How your luxury shopping experience will change after the Circuit Breaker
Style
Breitling revives the limited edition Superocean Heritage ’57 in support of healthcare workers
Travel
The UK to revise its international travel restrictions from June 2020
Style
These sneakers are made of apple leather and recycled materials
Sign up for our newsletters to have the latest stories delivered straight to your inbox every week.