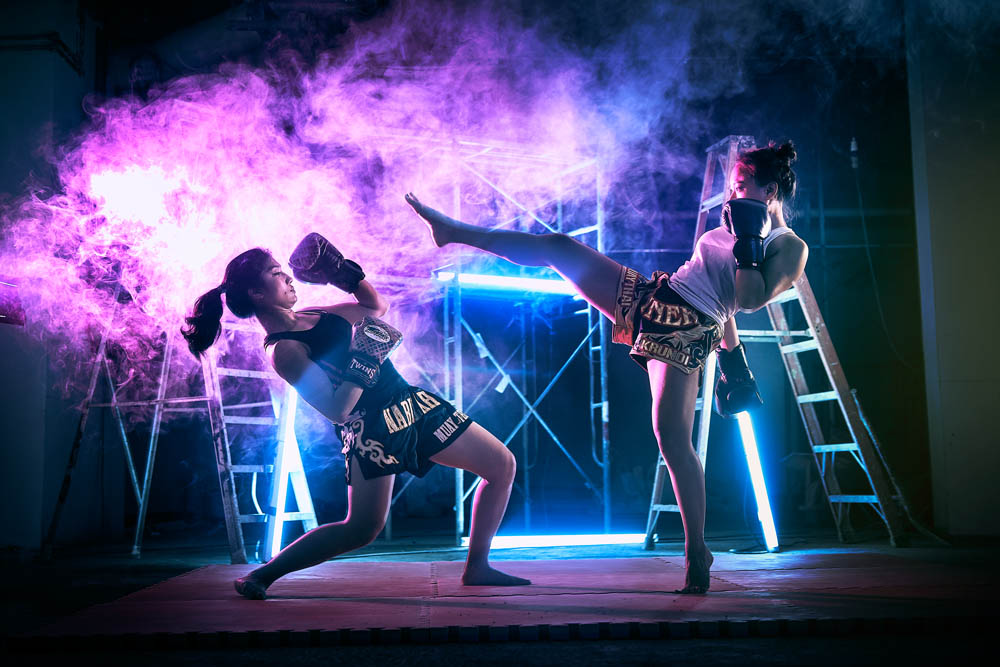 Muay Thai is a pretty exhaustive sport in itself, but if you’re just looking to attain the mean physique of its fighters without getting bruised, there’s a new class in town: MuayHIIT. Its name is pretty self explanatory — it combines the ancient Thai martial art of Muay Thai with High Intensity Interval Training.

If you’re not daunted by the fact that the class marries only two of the most physically demanding activities and would like to challenge yourself, you’ll find it at Neue Fit, Kallang Wave Mall’s newest addition.

Martial arts instructor Grace Huang co-founded the trendy lifestyle fitness studio with the aims of creating a safe space for people to pursue their goals through conventional fitness routines, while reaping the mental benefits of learning martial arts. Self-confidence, self-discipline and a greater ability to stay focused are but some of the life skills she hopes to bring to the table besides fitness.

Spanning an expansive 4,033 square feet of studio space, Huang did away with the superfluous, and designed Neue Fit to be as practical as possible. The result is a no-frills, clearly-divided layout of retail space (which houses New Balance gear), a martial arts area (for combat and non-combat Brazilian Jiu-Jitsu (BJJ) and Muay Thai, as well as HIIT) and an enclosed room for yoga.

Well-equipped bathrooms and locker spaces make it extra convenient if you want to squeeze in a quick session before or after work too.

The 45-minute non-combat class was as engaging as it sounded, as the instructor led us through basic punching and kicking combinations before we were allowed to take out our frustrations on the traditional punching bags. Random intervals of HIIT meant we had to drop down to do push ups, sit ups or lunges before continuing with increasingly advanced Muay Thai moves. Don’t be intimidated if you’re a beginner to the sport — our instructor was incredibly patient, taking the time to correct our posture and technique every step of the way.

If martial arts aren’t your thing, the gym also offers zen at its three types of yoga classes. NeueB focuses on honing your basics, while Flow and Core are cardio- and abs-centric sessions respectively.

The class might’ve only been 45 minutes long, but Neue Fit managed to work just about every muscle imaginable. You’ll feel your hand-eye coordination being tested throughout the routine, which means you’re subconsciously focusing and putting more effort into your workout too. While many boutique gyms these days offer boxing and HIIT classes, MuayHIIT might just be the first to get the ball rolling in another direction. It’s a great stress reliever and body-toning option rolled into just under an hour — especially after a particularly trying day at work.

Build muscle and recover faster with these post-workout snacks