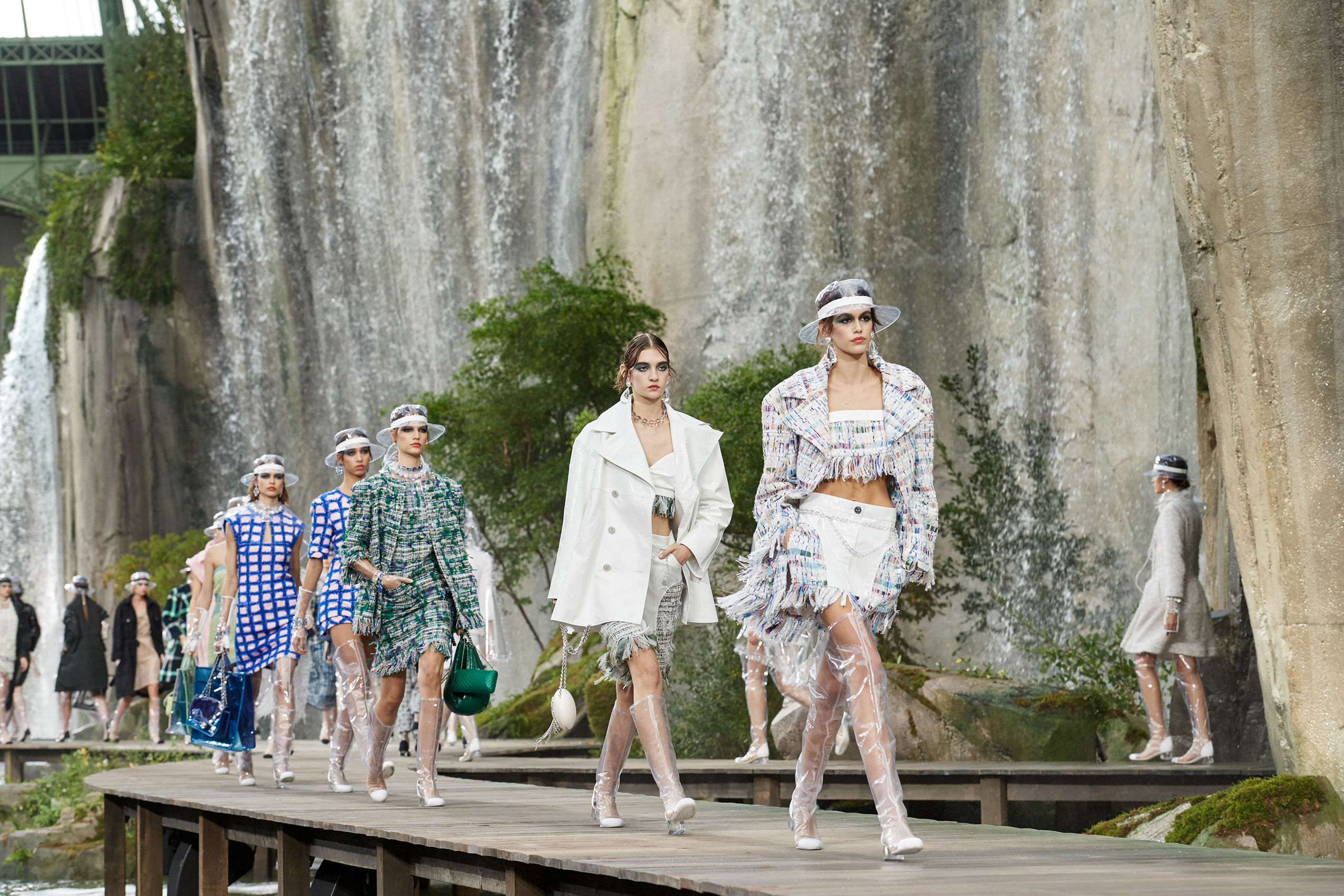 What will be all the rage? What are the Spring 2018 trends we need to get in on? And how does a woman want to dress anyway? These questions begged to be answered as we combed through post-show pictures taken from runways in fashion’s four eminent capitals: New York, London, Milan, and Paris.

Now that we’ve come to the end of Spring 2018’s catwalk circuit, designers have offered their own powerful answers. Below, we sum up the five key trends that we expect to make ubiquitous appearances soon.

Karl Lagerfeld’s PVC-replete lineup at Chanel was a beckoning call to gear up and brace ourselves for the worst possibilities; Raf Simons’ perennial fascination with Americana tropes at Calvin Klein was heightened with satin cowboy uniforms in contrast to the political decline of the nation; while Demna Gvasalia’s “Fake news, but fake good news” newspaper headlined shirts were a jab to our murky reality.

Gatsby flapper girls aren’t the only ones to appreciate the kinetic appeal of well-placed fringes. The go-to accent of the roaring ’20s is given a modern 21st century twist by slanting it off-kilter and throwing in elements Daisy Buchanan would have never dreamt of.

These unassuming, awkward-length tights didn’t make their viral debut on the runway: Kim Kardashian West, and later, Bella Hadid and Kendall Jenner, were seen sporting similar shorts even before these pieces hit the Spring 2018 catwalks.

While they wouldn’t look out of place in a spinning class, these biker-length shorts were juxtaposed with tailored blazers or delicate toppers instead. It’s safe to say that this trend trickled up from the streets and onto the moodboards of designers such as Anthony Vaccarello, Virgil Abloh, and Dion Lee.

Say goodbye and throw your classic white shirt out the window — it’s time to spice up your nine-to-five staple. At Esteban Cortázar, the off-the-shoulder droop reigned supreme; while at Balenciaga, Demna Gvasalia gave us a two-in one shirt illusion. Over at Sacai, Chitose Abe applied a deconstruct-and-reconstruct modus operandi.

Donning stark, in-your-face yellow requires more than your average dose of confidence — and more so when it’s printed with bordering-on-tacky animal prints. Think leopard spots and zebra stripes, which we thought we had left behind in the disco-crazy ’80s. Still, in bleak periods as these, any glimmer of hope — whatever the form — is duly appreciated. So go on, bring out the zoo, Stella, Donatella, and Miuccia.